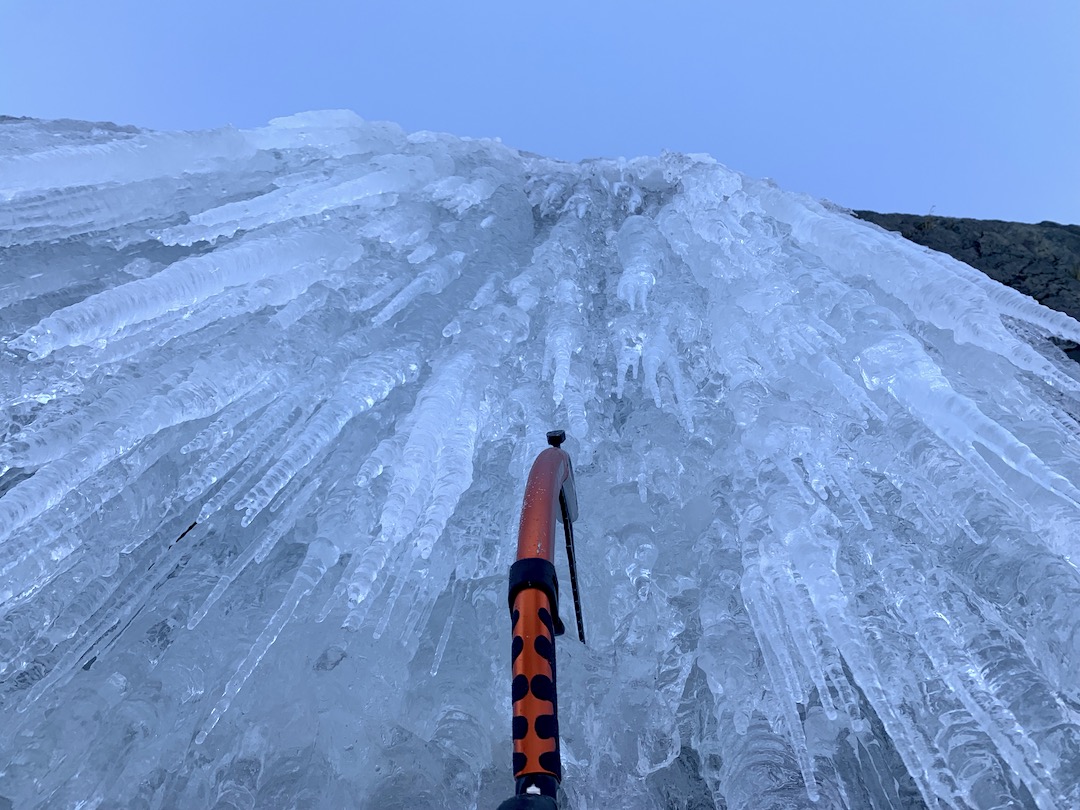 The head of Mistake Creek in the Earl Mountains is seldom visited in winter, at least not by climbers. It’s a cold and dark place, but when I first ventured there in the winter of 2020, to climb the south face of Pyramid Peak (2,295m, AAJ 2021), my eyes were well and truly opened to the vast potential. One feature in particular had caught my attention: a continuous line of ice runnels and mixed grooves that linked nearly a vertical kilometer up the east face of Flat Top Peak (2,282m).

It was almost a year to the day before I returned, over which time the lure of the line had been a constant presence in the back of my mind. The onset of winter saw my anticipation grow and had me eagerly checking forecasts and monitoring freezing levels. When I thought the right conditions had developed, I hiked into the upper Mistake Creek valley on a brisk July afternoon in preparation to climb the following day.

In the morning, a warmthless alpenglow began to reveal the secrets of the coming day as I tentatively climbed the slope beneath the face. A thin accumulation of plastered snow and névé covered the otherwise blank and weathered rock slabs. Despite having been on the move for over an hour, my legs still felt sluggish. It’s an internal battle I fight before every alpine climb—digging deep to find the self-motivation required to overcome the desire to turn tail and flee back to the warmth of my sleeping bag.

Above, I could glimpse a hanging curtain of icicles emerging from the half-light. A tenuous frozen link to the unknown ground beyond. The first swing into firm water ice both excited and scared me. My breathing slowed and my pulse spiked with nervous expectancy. Losing all sense of time, I immersed myself in the repetitive rhythm of movement. Swing and kick, step up, and repeat. Minutes passed like hours and the day steadily slipped by. The face slowly came to life with the arrival of the sun, bringing with it both welcome warmth and less welcome intermittent barrages of falling ice and snow. The rattle and hiss from above a constant reminder for caution. Even with its inherent risks, there is still a basic pleasure to be found in climbing a sunny multipitch ice route in the middle of winter.

The solid ice on the lower face gradually transitioned into less consistent alpine névé, thinning as the terrain steepened. Protection for belays and runners became increasingly hard to find and tricky to place. Forgoing questionable security for speed, I left the screws clipped to my harness and began to trail the rope. It was the type of ice that climbs well but leaves you on edge: Delicate placements bite, slip, then bite again, sometimes bouncing and skating off the rock below.

Eventually I entered the upper headwall and scratched my way up a thin mixed groove to reach the exit gully. Steep climbing on fine hooks, often with a veneer of ice overlaying the rock below, was followed by an oddly reassuring waist-deep snow wallow. It’s not often that you find solace in plowing a snow trench after 1,000m of climbing, but there is a lot to be said for the simple pleasure of being able to stand upright without using your frontpoints.

Reaching the summit brought relief rather than celebration. A weight lifted from my shoulders. But the respite was temporary, knowing the journey was a long way from being complete. While not overly complicated, the descent was nonetheless engaging. The long traverse south takes your breath away in equal amounts due to the otherworldly beauty of the surrounding vista and the unrelenting exposure. I felt blessed to look down on the frozen expanse of Lake Erskine, a view enjoyed only by a fortunate few. Wisps of blown snow dancing across the otherwise still surface. Lifting, spinning, and skipping in a random pirouette before settling again into nothingness. Savoring the unparalleled silence of the high mountains on a calm day—it’s an experience that we as mountaineers are privileged to enjoy, and is what draws me back time and time again. 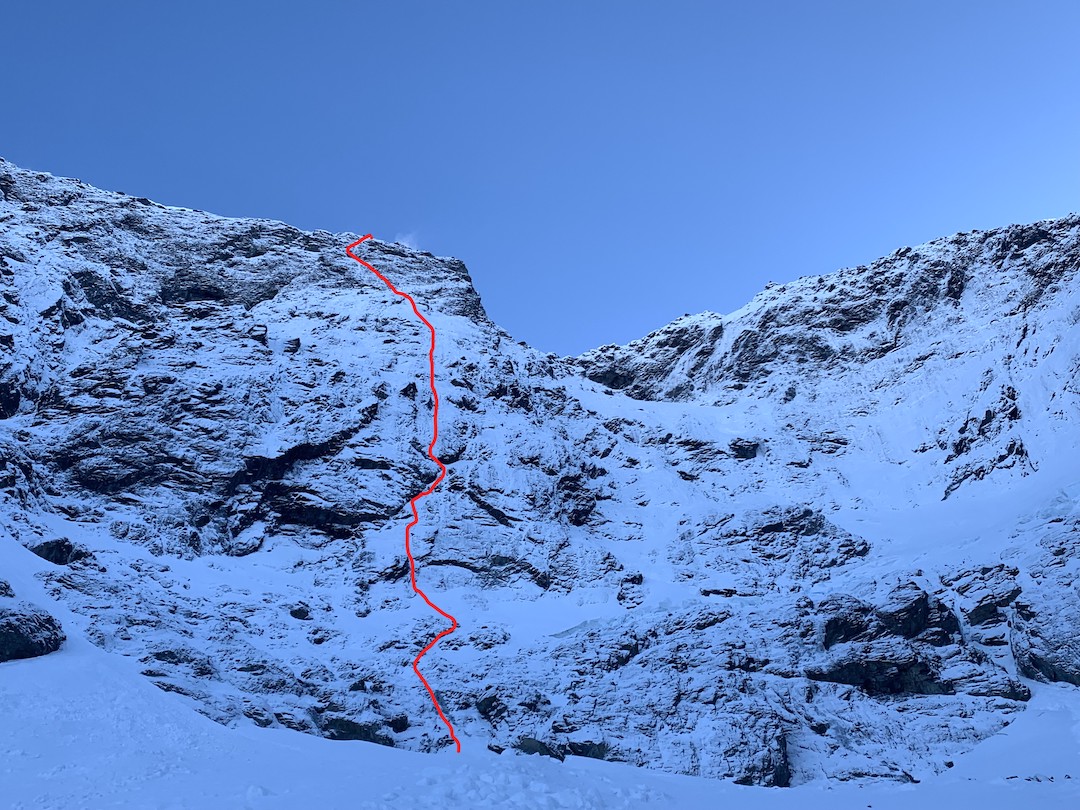 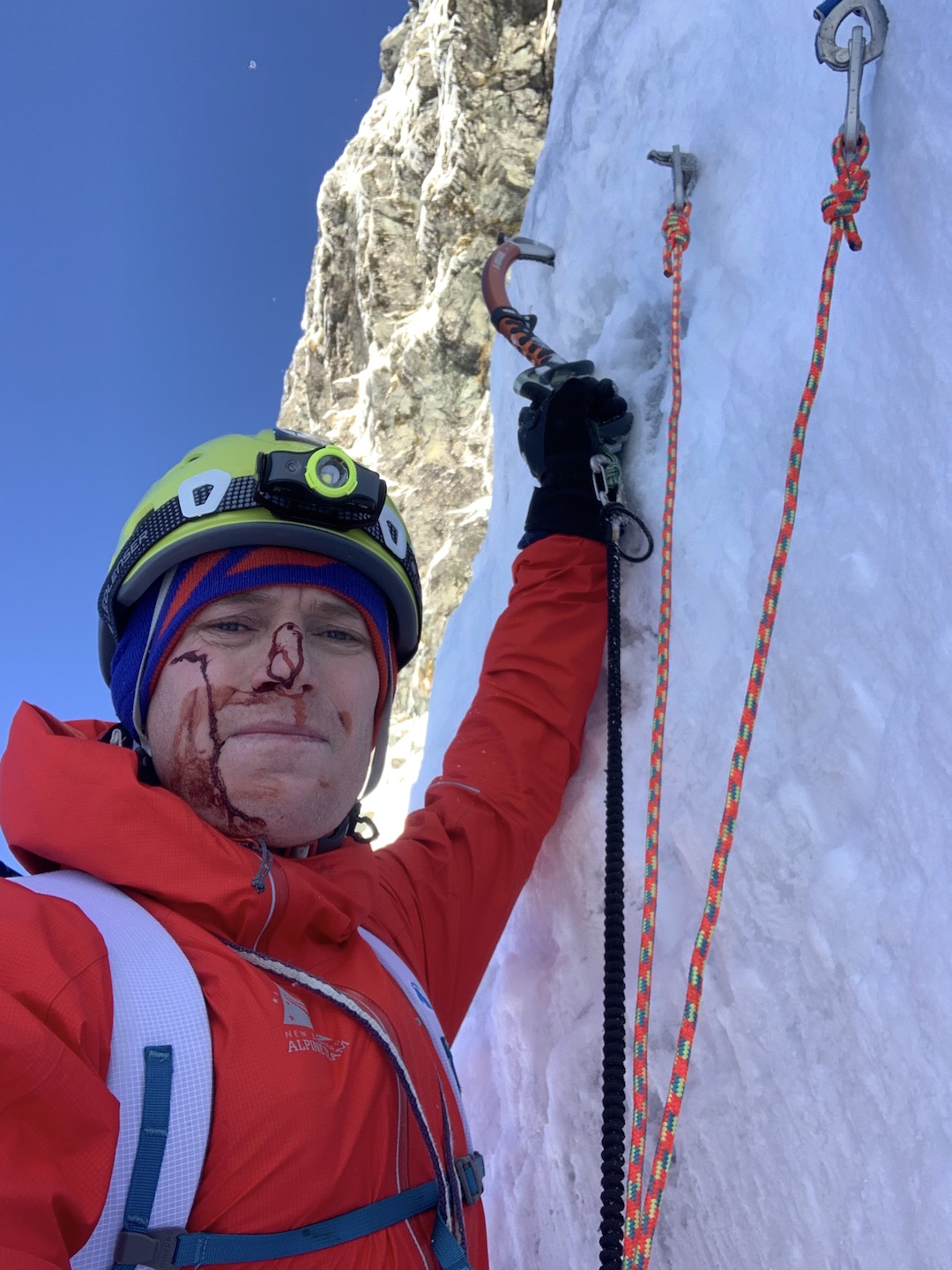