In July, the Slovenian Youth Alpine Team, comprised of Blaž Karner, Bor Levičnik, Matija Volontar, and I traveled to the Cordillera Blanca. After acclimatizing, we immediately started preparing for the north face of Hualcán (6,122m), which had been in our minds for over a year. Previously, the face had only been climbed by Alik Berg and Aritza Monasterio (AAJ 2018). Monasterio has a long history of climbing with Slovenians, and after contacting him, despite our age gap, he was keen to climb with us.

We departed Huaraz on July 15. The walk to the base of the face is usually done in two days, but we decided that we were all sufficiently acclimatized to do it in one long day. After eight hours of walking with a heavy backpack, we established camp on the glacier at the base of the wall. Looking at the face, we decided that Bor Levičnik and Matija Volontar would try to climb a new route starting on the left edge of the north face to reach the northeast ridge and east (main) summit. Blaž Karner, Aritza Monasterio, and I would try our luck on the right side of the north face, climbing a system of pillars, rock bands, and snow slopes leading directly to the lower west summit (6,107m). Both teams started climbing the following day.

On July 16, we started climbing on the far east (left) side of the north face, quickly reaching the northeast ridge. From the glacier the ridge line had looked easy, and we had envisaged that one day would be more than enough to reach the east summit. While climbing the first pitches of the northeast ridge, however, we quickly realized we were moving too slowly to get anywhere near our goal that day. The climbing was steep, sometimes overhanging, with poor protection. There were, though, a couple of pitches of very good névé and rock. We reached the top of the first part of the ridge in about 10 pitches.

We expected the next part of the ridge to involve mostly walking along cornices, but we could not have been more wrong. Instead, we encountered massive snow mushrooms, almost impossible to cross. We traversed along the north side of the ridge, resorting to rappels in three separate spots to reach more solid ground. Exhausted, we set up our tent on a small plateau at around 5,700m.

On the morning of the 17th, we started climbing around 7:30 a.m., hoping to climb in the warmth of the sun. We were short on luck, as the sun was almost immediately covered by thick fog and a strong wind picked up. Without the photos of the upper route we’d taken from the glacier, navigation to the east summit would have been very hard. We mostly simul-climbed steep and variable snow and ice. What stands out the most from that second day is the final pitch; mentally, it was the hardest, with at least 20m of near-vertical powder snow, very little to grasp onto, and no protection.

We reached the main (east) summit of Hualcán (6,125m) at around 3 p.m. Since it was almost a complete whiteout, and only getting worse, we descended immediately. It took us eight hours across a complex glacier to reach Laguna Cocha, where we spent another night. From the lake, there is a nice path that took us to the road and back to Huaraz the following day. We called our route Virtual Insanity (1,500m, 70–90+° M5).

On the morning of July 16, we made the approach across the broken glacier to the right side of Hualcán's north face. The initial pitches went smoothly, offering easy but interesting mixed climbing up to M5.

Above this was a steep, rocky pillar with a lot of dihedrals, none of which seemed easy. This was the obvious crux of the whole route, which we had spotted from the glacier the previous day. We planned to bypass the steep, lower part of the pillar by the apparently easy couloir on the left; however, after observing significant rockfall in the couloir, we decided to traverse across smooth slabs to reach the middle of the pillar. These technical pitches were followed by steep and exposed climbing up to VII/6b on the pillar itself. We ended the day in search of a suitable bivy spot. After an hour of digging, we settled for a meter-wide snowy ledge.

The next day the technical difficulties eased up to M5 and we found some nice pitches with amazing ice. During the day the weather worsened, and fog provided some route-finding difficulties. We climbed the last mixed barrier at nightfall and pitched a tent on Hualcán’s west summit (6,107m). On the 18th, we were quick to discard any hope of descending the normal route to the village of Hualcán due to zero visibility, snowfall, and strong wind. So, we spent a second day and night on top, awaiting better weather. On the 19th, after 36 hours on the summit, we quickly packed the tent in high winds and descended the glacier to the village, ending our five-day adventure. We called our route Knights and Days (1,000m, 70–90° VII M5). 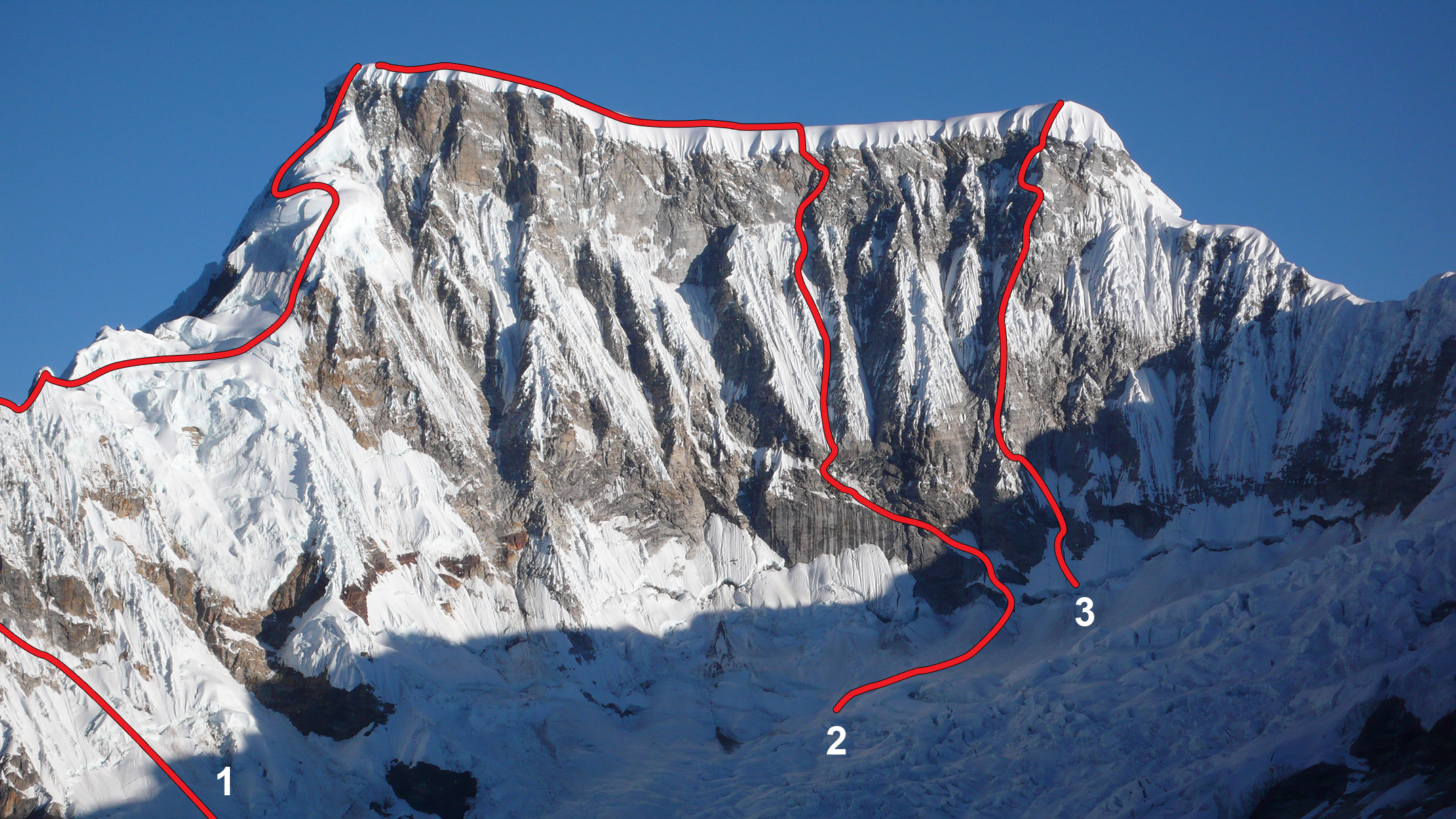 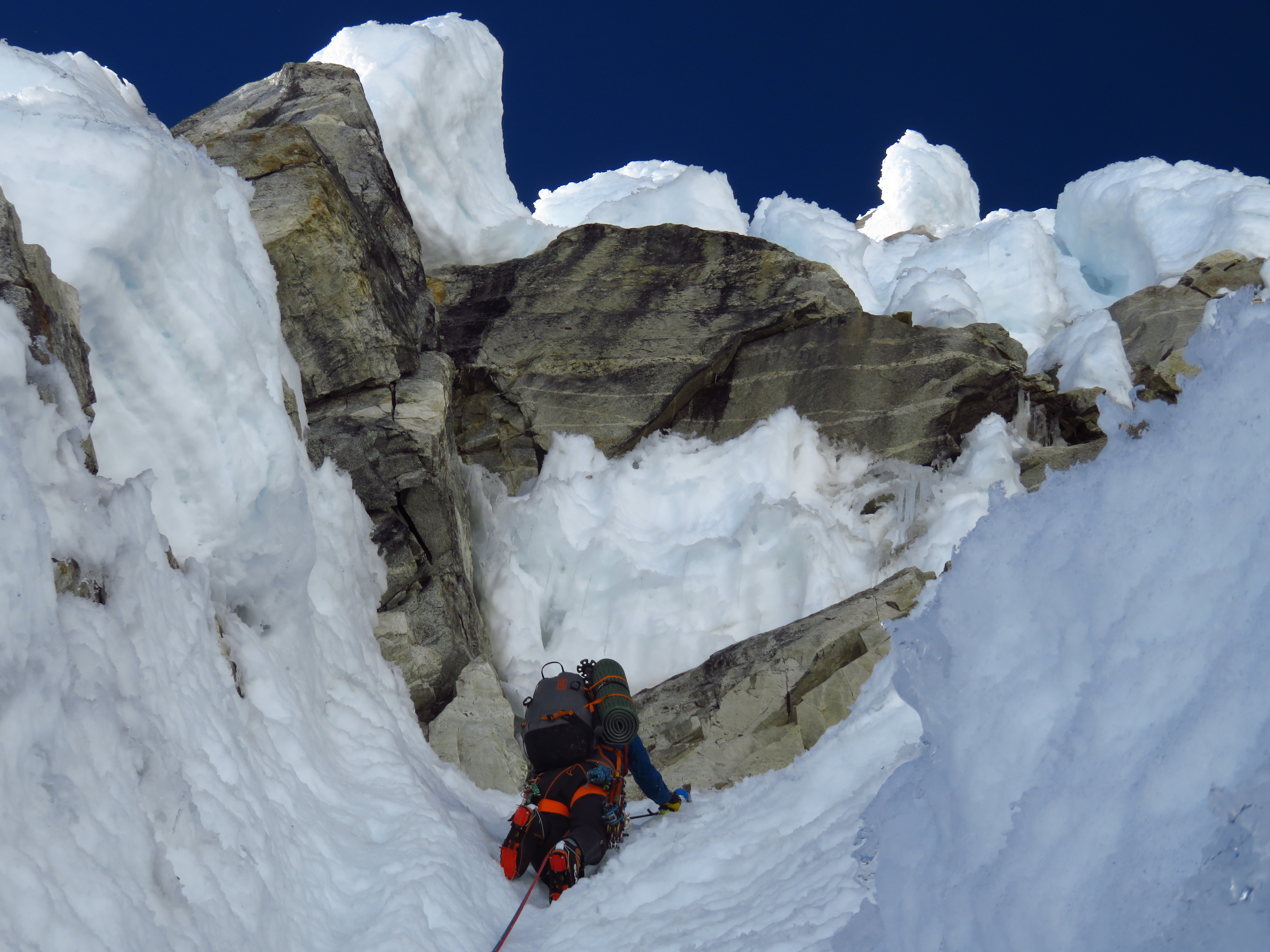 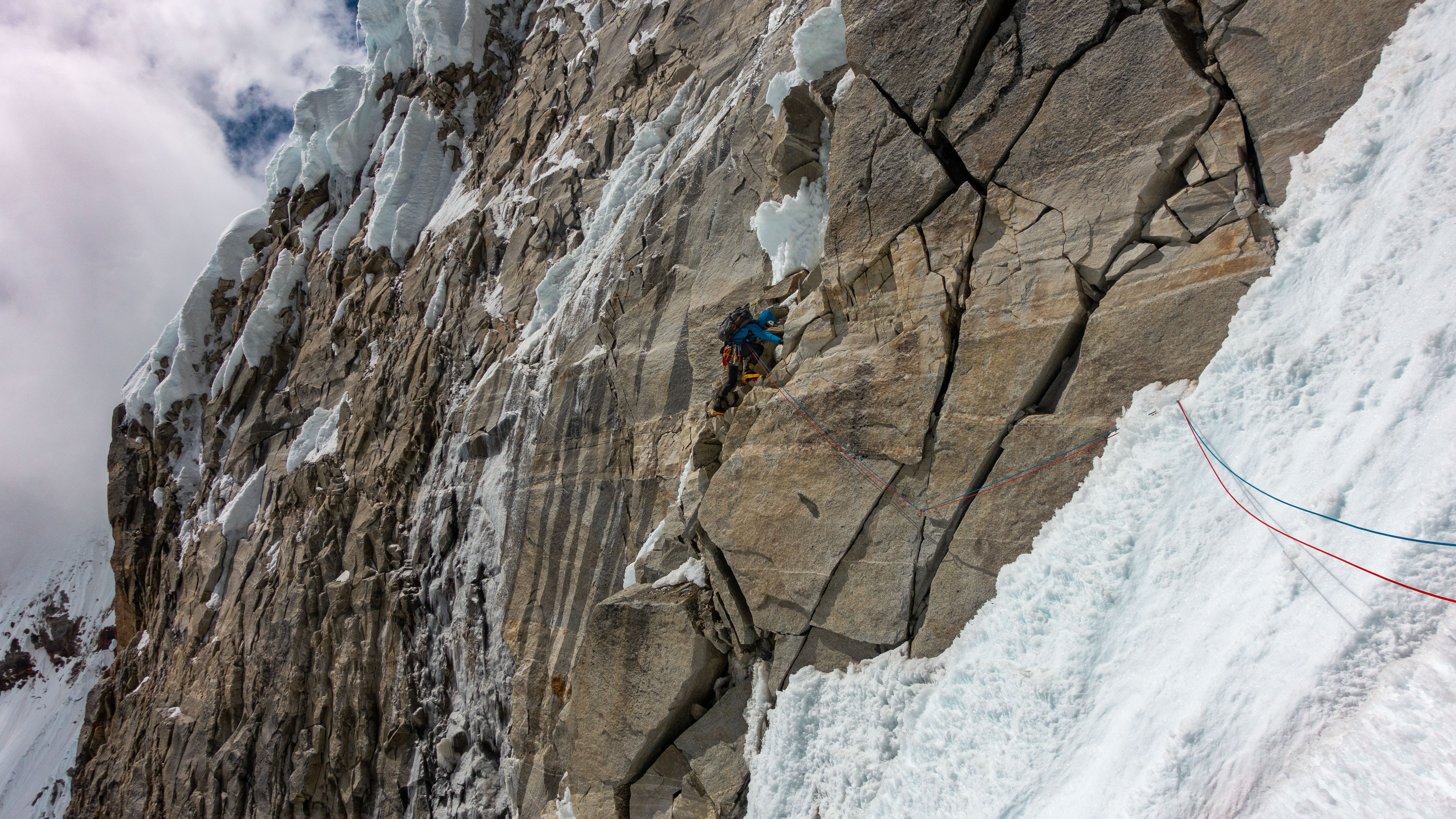 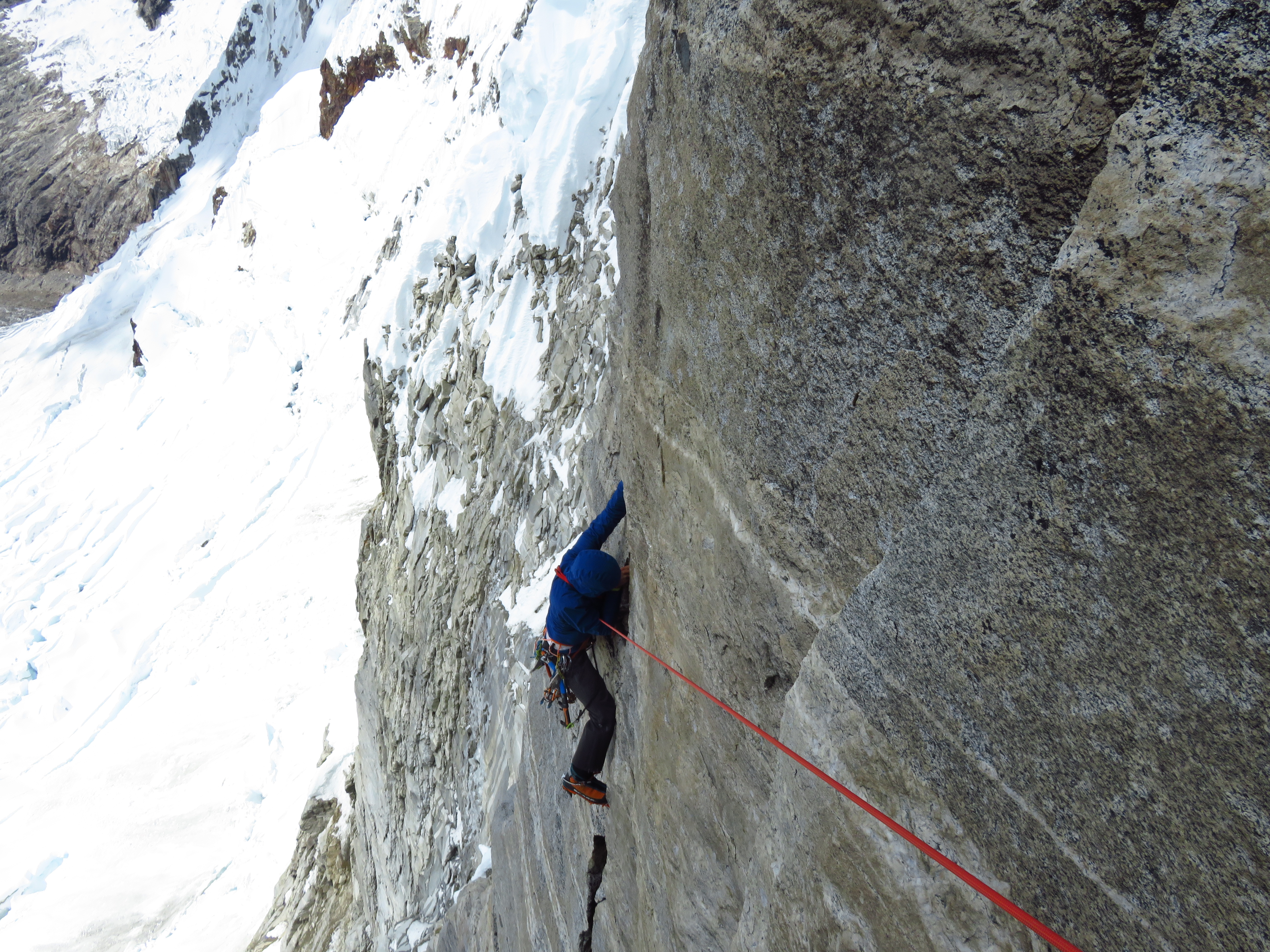 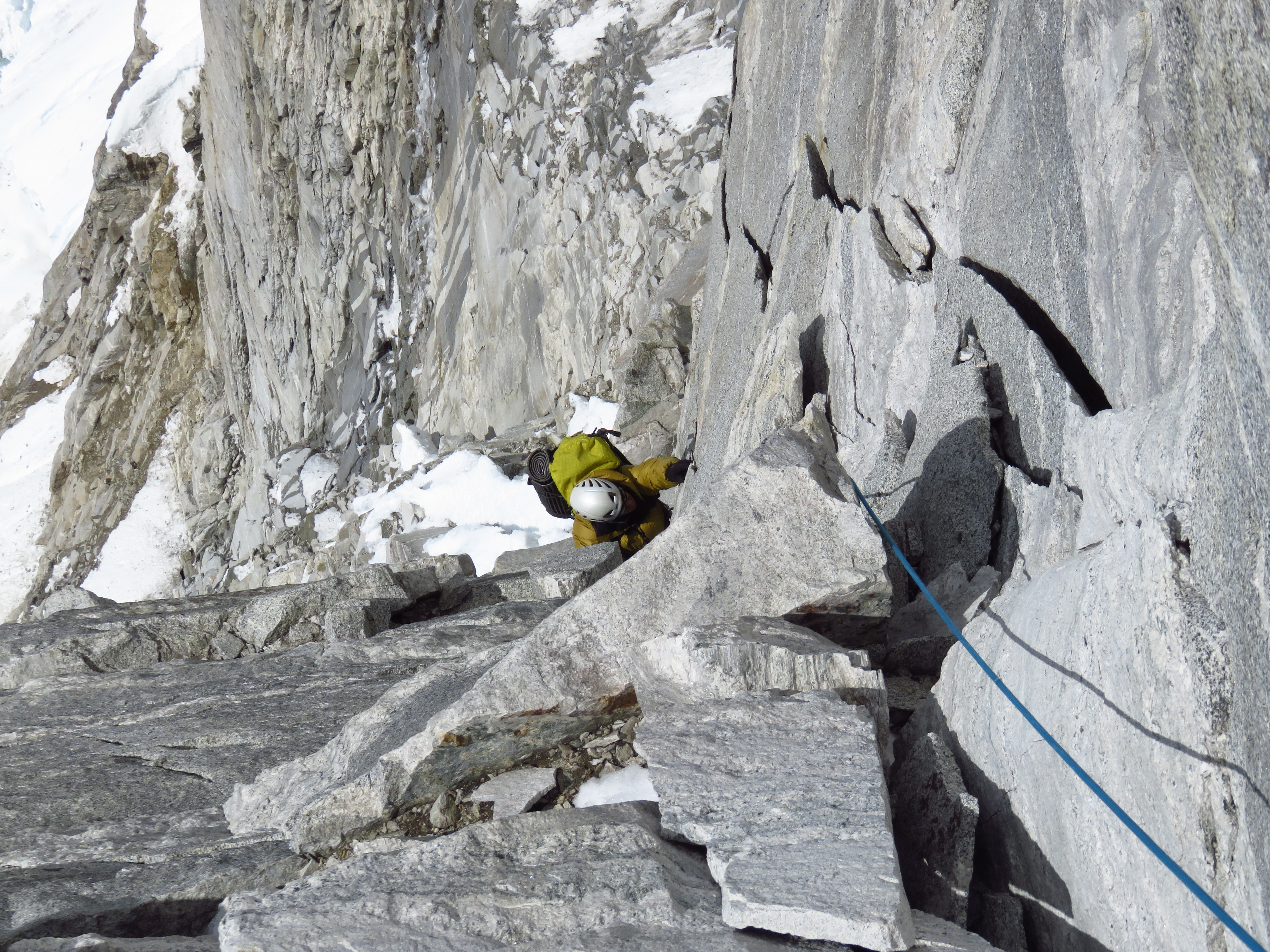 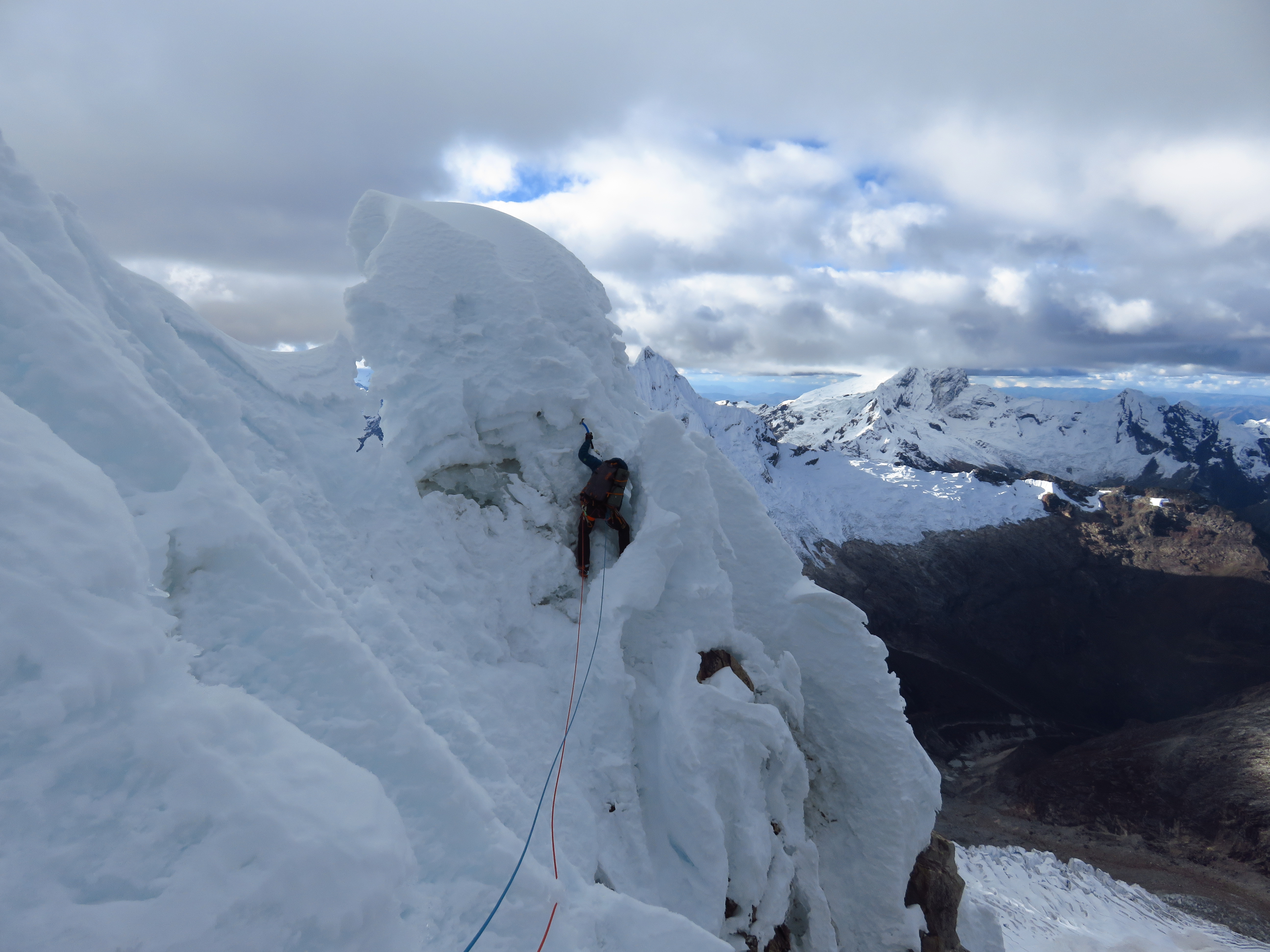