After two years of pandemic, the desire to climb in the Greater Ranges was intense. After the umpteenth postponement of our summer expedition to K2, I remembered Tengkangpoche. It wasn’t difficult to assemble a close-knit team: After a couple of phone calls, Roger Bovard, Emrik Favre, Leonardo Gheza, Jerome Perruquet, and Francesco Ratti had agreed to travel to Nepal.

We arrived at our 4,500m base camp, a little further on from Thame village, on October 17, and began acclimatizing immediately. We slept at 5,400m just before a big storm arrived; after the storm, the mountains were covered with a good meter of fresh snow, with the coverage down to 4,500m. A few days later, we decided to look at nearby Tengi Ragi Tau Southeast (a.k.a. Paha- mlahaka, 6,141m). Leo, Emrik, and I chose the rocky south-southeast ridge, leading to a shoul- der on the east ridge, while Francesco, Jerome, and Roger opted for the snowier east ridge itself.

On the 22nd we left base camp. The rock on the south-southeast ridge proved to be very good, and after an initial sharp section we climbed a conspicuous gendarme with two pitches of sustained UIAA V/V+. We bivouacked above this at around 5,300m; to this point we had seen pitons from previous travel. [This ridge was first climbed in its entirety, with two bivouacs, by Radek Lienerth and Alexandr Tolok (Czech Republic) in autumn 2003. On reaching the shoulder, they followed the southeast ridge to the summit of Tengi Ragi Tau Southeast. The 1,700m route was named Like a Dhal Bhat (ED1, VII- 75°) and was repeated the following year by three French, who found difficulties up to 6b+.] Next day we moved right, onto the southeast face, following lines of weakness. Snow conditions were not perfect, and rockfall passed over our heads. From the radio we heard our friends had reached the shoulder, so our escape down the east ridge now had a track in place.

At midday we finally reached the shoulder at a little below 6,000m. Mist began to envelop us. Over the radio, Roger explained they had just set off an avalanche and conditions were delicate. We descended from there, and fortunately all went well; by 5 p.m. we were back in base camp, drinking beer. We named our variant Himalayanos Desperados (1,200m, V+ M5 80°).

After a suitable rest we set off for our main goal, a direct line up the northeast face of Tengkangpoche (6,487m), left of the northeast pillar, finishing up the east ridge. Matt Glenn and Tom Livingstone were climbing the pillar, and I was inspired by their motivation and skill. Our first two days passed smoothly, the biggest difficulties placing solid protection on the hard pitches and deep snow on less inclined sections. There were a couple of pitches of around M6. At around 5,500m, a large avalanche, triggered by the collapse of seracs just below the summit, came down the face. Fortunately, it missed us by 20m. We had estimated our route would only be exposed to serac fall for around 20m, and we now realized that a discharge from one of these seracs could sweep the entire wall. It would have been madness to continue.

Back in the valley, morale was low, and we now had few ideas about what to do with our remaining time. Francesco and Jerome went to reconnoiter the northern aspect of the smaller summits that lie on the ridge between Kwangde and Tengkangpoche. They were pleasantly surprised to see solid ice lines, and a decision was made to try a new route on this face. Arriving at the base, we discovered two obvious parallel lines, both leading to a col where we intended to bivouac. We split into two teams.

Leo and I climbed a beautiful goulotte, interrupted in the middle by a vertical rock step that Leo led via an obvious and difficult crack. At 6 p.m. we exited onto the ridge at 5,700m. Emrik, Francesco, and Jerome were just behind, having climbed their own line. (Roger remained in base camp.) By 10 p.m. we had chopped plat- forms for two tents and were warm after the day’s cold exertions. This col marks the lowest point on the ridge between Kwangde Nup and Tengkangpoche. We would later name these two routes Santarai (Cazzanelli-Ghezza) and Settebello (Favre-Perruquet-Ratti). Both were 450m, AI5 (or 5 R) M7 A2.

After waiting for the sun to reach us next morning, by 9 a.m. all five of us were traversing the ridge toward Tengkangpoche, crossing various small summits between 5,800m and 6,000m. The highest was covered with prayer flags, presumably placed by climbers coming from the south. In the middle of the afternoon, at around 6,100m, we set up camp below the final rise of the east ridge toward Tengkangpoche. [This part of the ridge, approached from the south, was climbed in 1984 by Trevor Pilling and Andy Zimet during the first known ascent of the mountain.] Here we found sections of fixed rope, left by a French expedition that had attempted the summit a few days previously.

The following day, helped by the fixed ropes, we climbed quickly to 6,200m, where the ropes stopped and we realized the French had not reached the top. The way ahead was steep and sharp—not extreme but very exposed. Finally, we reached the top and quickly began our descent.

Reversing our route to the 6,100m bivouac site, we then went down to the north, following the descent line used by Nick Bullock, solo, in 2003, after an ascent of the route Love and Hate (D+/TD-) further right on the face. After a couple of rappels, we downclimbed at our own pace and before evening were back in camp.

Later, I would make a speed ascent of the normal route on Ama Dablam. Leaving base camp at 4,567m early in the morning of November 11, I spent 1 hour and 50 minutes ascending to Camp 1. An hour later I was at Camp 2, and one hour after that had reached Camp 3. I rested there 15 to 20 minutes, and after a total elapsed time from base camp of 5 hours and 32 minutes, I was slumped over the summit. I was very happy, as I never thought I could do it in so little time. [Only Russell Brice in 1995 and Jorge Egocheaga in 2011 managed a similar climb rate; respectively 3 hours and 20 minutes from 5,200m to the top and 5 hours and 28 minutes from 4,900m to the summit.]

I returned to Camp 3 quickly [18 minutes], where I found that one of Mingma David Sherpa's clients was evidently suffering from cerebral edema. I have known Mingma for years, and immediately offered my help. After putting the client on oxygen and stabilizing her, I organized a helicopter rescue. She was long-lined to safety after a couple of hours. It was well over four hours from my arrival at Camp 3 before I could continue the descent, but my "time-trial" on Ama Dablam has given me hope for future projects. 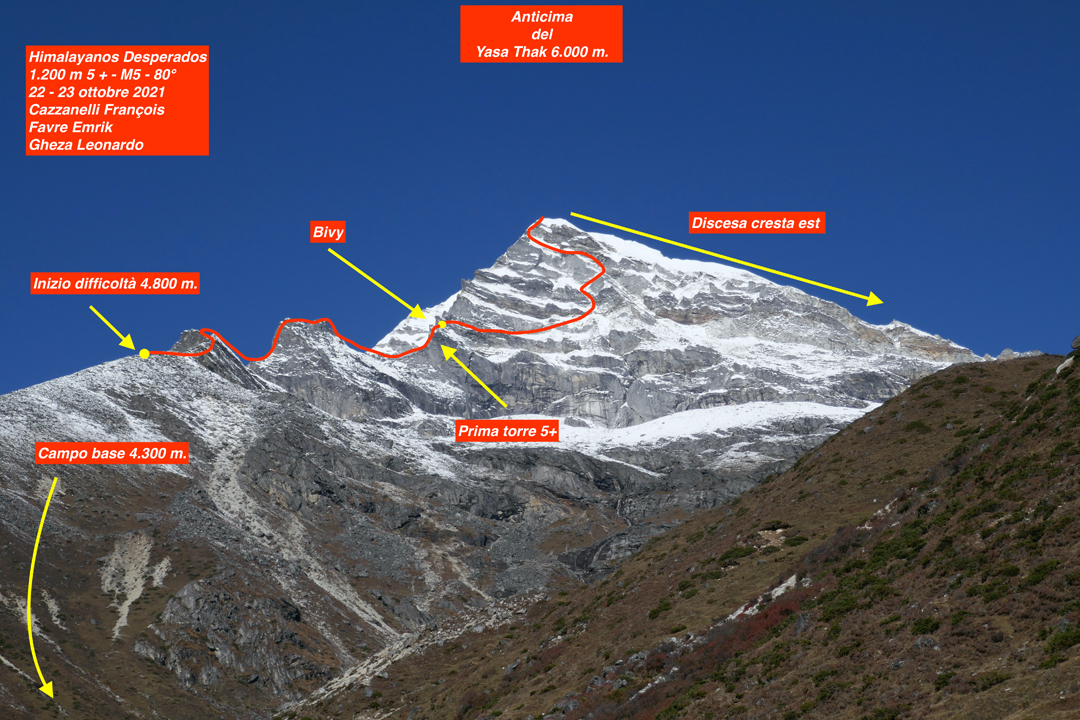 The new Italian line on Tengi Ragi Tau Southeast. The ridge was climbed direct and in its entirely to the summit by two Czechs in 2003.
François Cazzanelli 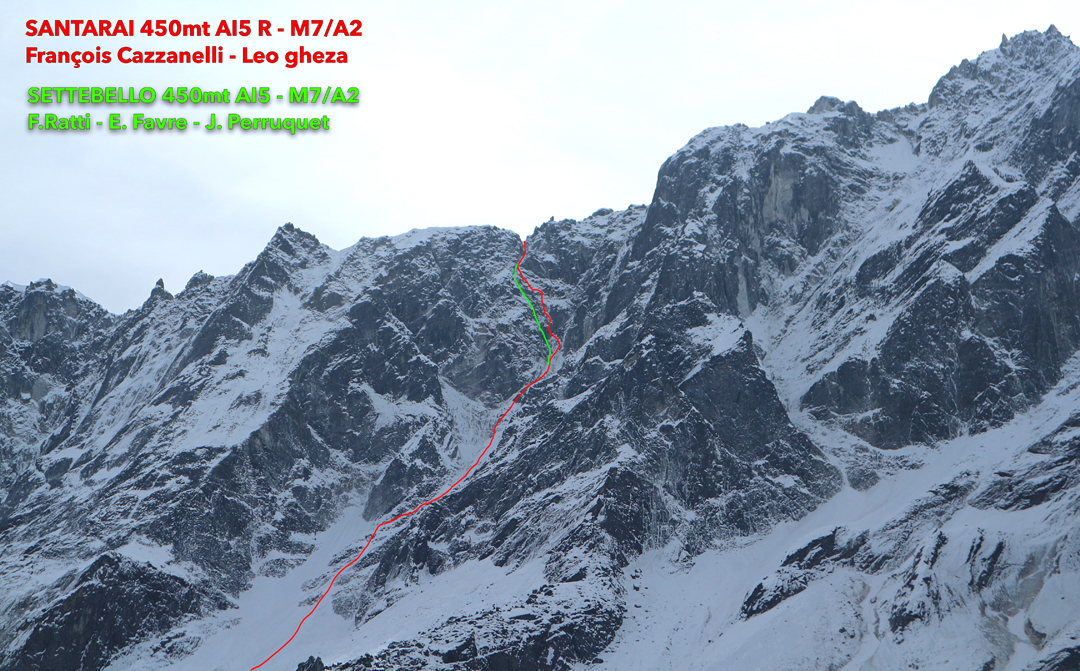 The two new Italian routes on the north side of the ridge between the Kwangde summits and Tengkangpoche.
François Cazzanelli 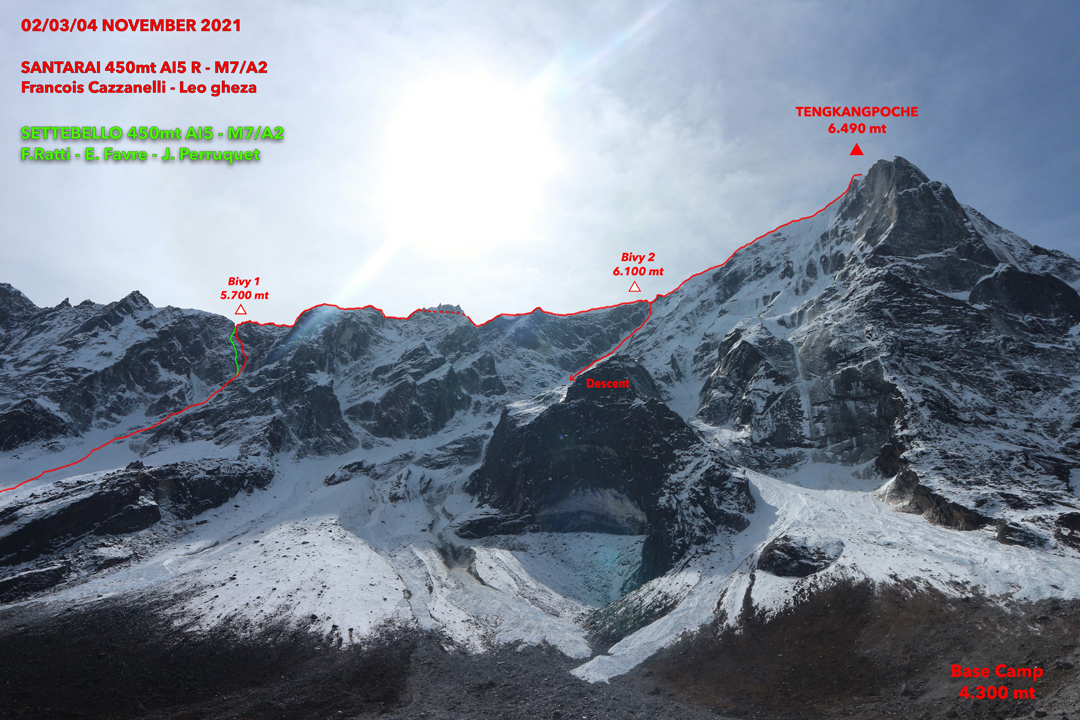 The complete ascent to and descent from Tengkangpoche by the November Italian expedition. Tengkangpoche's prominent northeast pillar is obvious on the right.
François Cazzanelli 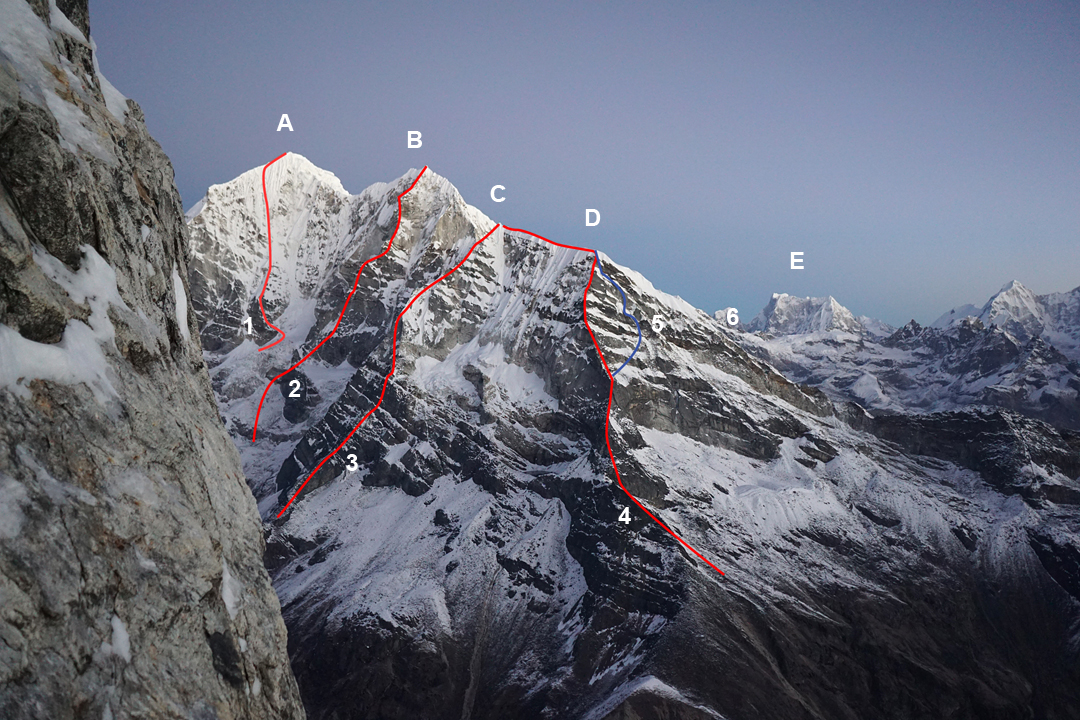 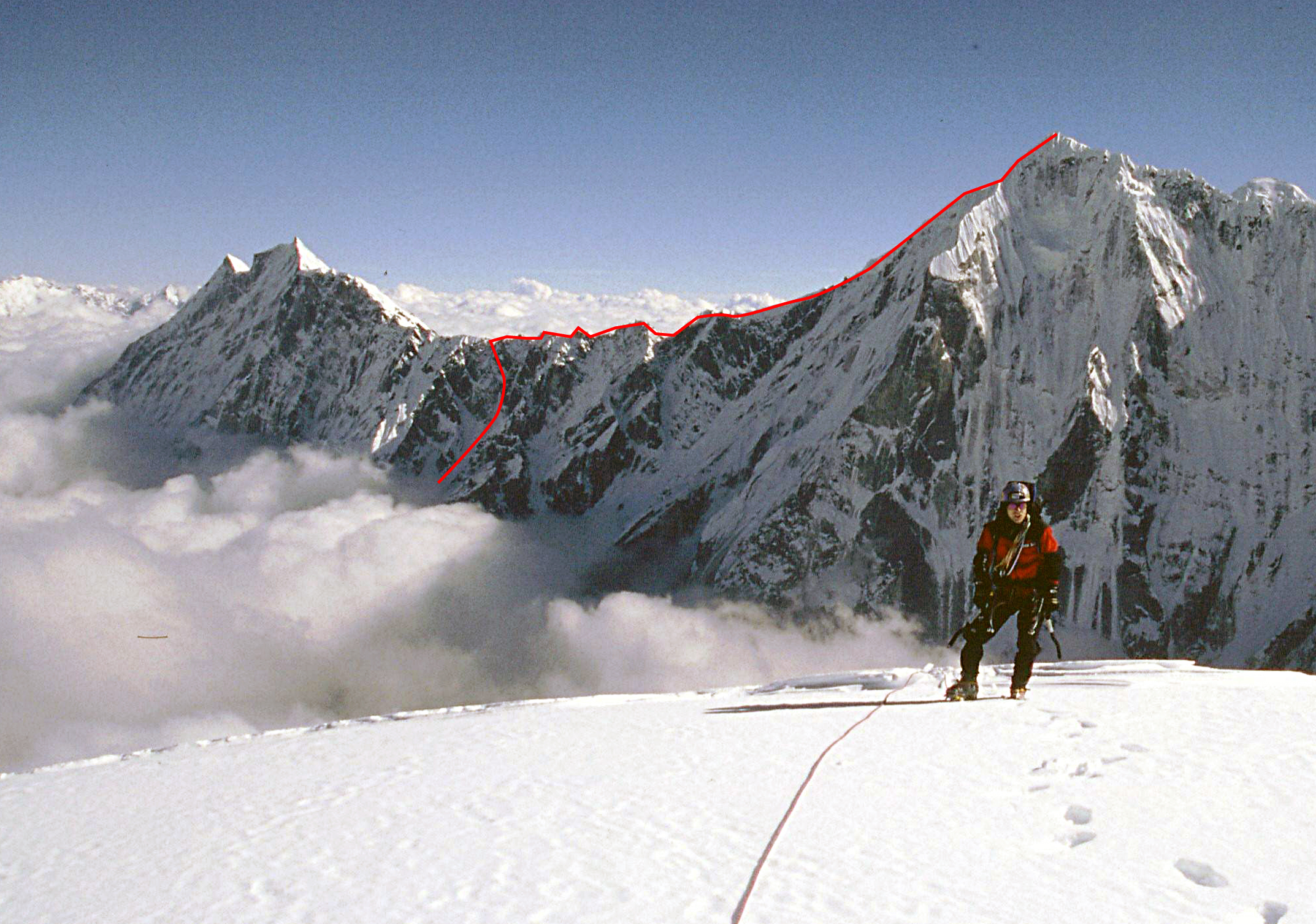 The east ridge of Tengkangpoche, climbed integral by Italians from the north. On the left is the Kwangde group.
Radek Lienerth 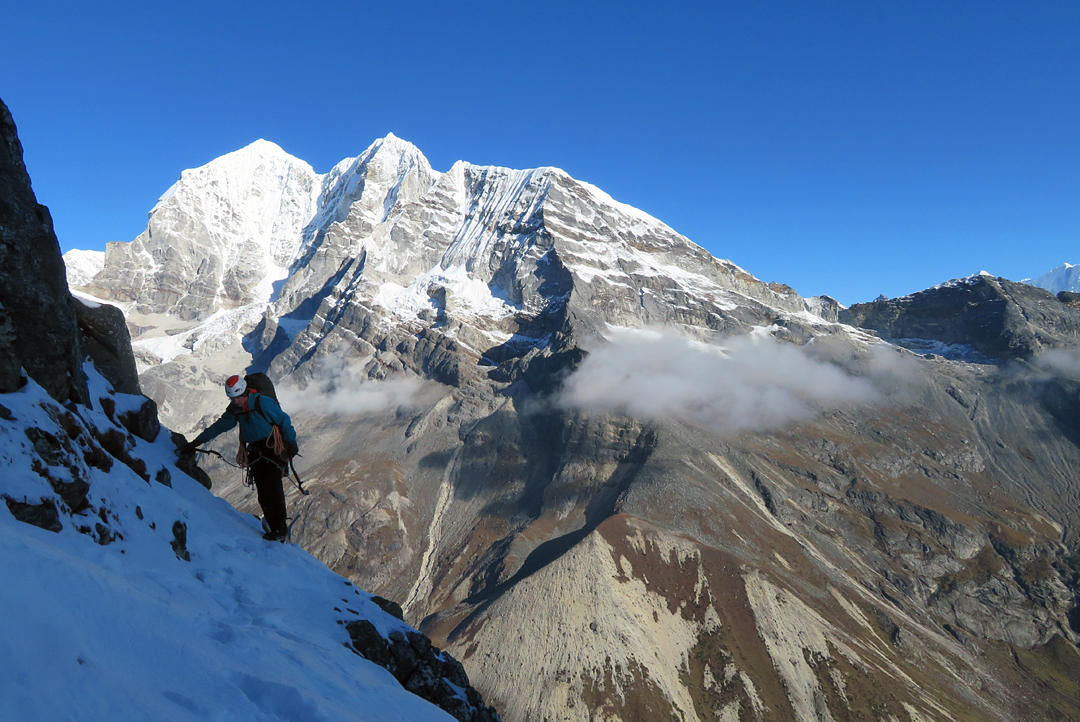 The new Italian line on Tengi Ragi Tau Southeast. The ridge was climbed direct and in its entirely to the summit by two Czechs in 2003.
François Cazzanelli

The two new Italian routes on the north side of the ridge between the Kwangde summits and Tengkangpoche.
François Cazzanelli

The complete ascent to and descent from Tengkangpoche by the November Italian expedition. Tengkangpoche's prominent northeast pillar is obvious on the right.
François Cazzanelli

The east ridge of Tengkangpoche, climbed integral by Italians from the north. On the left is the Kwangde group.
Radek Lienerth