Russian climbers Alexander Gukov and Victor Koval made what is almost certainly the first ascent of Pik Kosmos (a.k.a. Pik Schmidta, 5,942m, 41°00’16”N, 77°37’01”E), by a difficult route on the impressive north face. The peak rises at the head of the western branch of the Grigoriev Glacier, along the frontier with China, near the center of the Western Kokshaal-too range.

In mid-September, the pair acclimatized by camping on the summit of Pik Uchitel (4,540m) in Ala Archa National Park and then traveled to the Kokshaal-too over the next two days and approached up the Grigoriev Glacier. Like other parties who had eyed Kosmos, the pair found the seracs on the face to be extremely active and thought it might even be too dangerous to attempt, but eventually scoped a route in the center of the lower face that connected the lower and upper glaciers. Their line also bypassed difficult rock, as they knew the short days of late season would preclude slow aid climbing.

After bivying below the wall at 4,100m, the pair started up on the morning of September 26, simul-climbing through the lower section and pitching ice up to 75°, before reaching the first glacial serac, where Gukov was hit by falling ice but not seriously hurt. Climbing left and then back right around the serac, they ascended the 50° slope above and reached their first bivy site around 5 p.m., at 4,600m. They placed the tent under a protective rock wall, but it was damaged by rockfall in the night.

The next day the pair chose the left of two possible ice couloirs and climbed 10 pitches before again stopping at 5 p.m. to bivy, at around 5,060m. Early on their third day, one of the large seracs in the upper right-hand side of the face released with a roar, but they were out of range. The two moved up steepening ice, including a 20m overhanging stretch. Realizing they would not reach the ridge that day, they stopped early at 5,460m to cut a small ledge in the ice for a sitting bivouac. They nested their two sleeping bags and shared them for warmth, but spindrift began hitting them in the middle of the night, and eventually Koval got too wet and decided to stand on the ledge until dawn.

Day four saw them continue all day in the central gully before exiting onto the west ridge at 5,820m at 5 p.m. Disappointingly, they found the ridge very sharp and again needed two hours to dig a site for their tent, which was buffeted by high winds through the night. The two braced the walls with their bodies and attempted to dry their sleeping bags over the flame of their stove.

On September 30, they continued up the summit ridge, finding it very difficult along broken rock. At one point they dropped down onto the north side to traverse, before being forced back up onto the ridge. At 4:50 p.m. Gukov and Koval reached the summit, where their GPS read 5,957m, then began descending the east ridge, needing numerous rappels to reach the high northeastern plateau, where they eventually stopped at 10 p.m. and camped in a crevasse. The next two days were spent in an increasingly exhausted and desperate state, rappelling and navigating down through steep and crevassed terrain to finally reach their camp, friends, and safety, a week after leaving. The pair rated their 1,800m climb ED WI4 (2,600m climbing distance).

This mountain has officially been called Pik Schmidta, but it is popularly known as Kosmos. Earlier, it was known as Pik Dankova. In the 1960s it became apparent that another mountain 8km northeast across the Grigoriev Glacier, at 5,982m, was the highest in the area, and the name Dankova was transferred to that peak while the 5,942m peak became Pik Schmidta.

For some years there has been conjecture over whether Kosmos/Schmidta had been previously climbed. Research in the 1990s seemed to indicate it was climbed in the 1980s by a Soviet military team, but it now appears at least two old images in Soviet mountaineering archives with routes marked on the mountain were likely showing proposed routes—one a traverse, one a direct route up the north face—which needed to be submitted for approval before departure, and not lines that had actually been climbed.

Various unsuccessful attempts were made in the post-Soviet era, via the southeast ridge (2019), the north face (1998), and the northwest ridge, between Kosmos and Pik Rototayev (1995 and 2014; see AAJ 2015). It seems most likely the Gukov-Koval climb was the first ascent of the mountain.

Editor’s Note: This report was adapted from a longer story by Alexander Gukov, with his assistance. 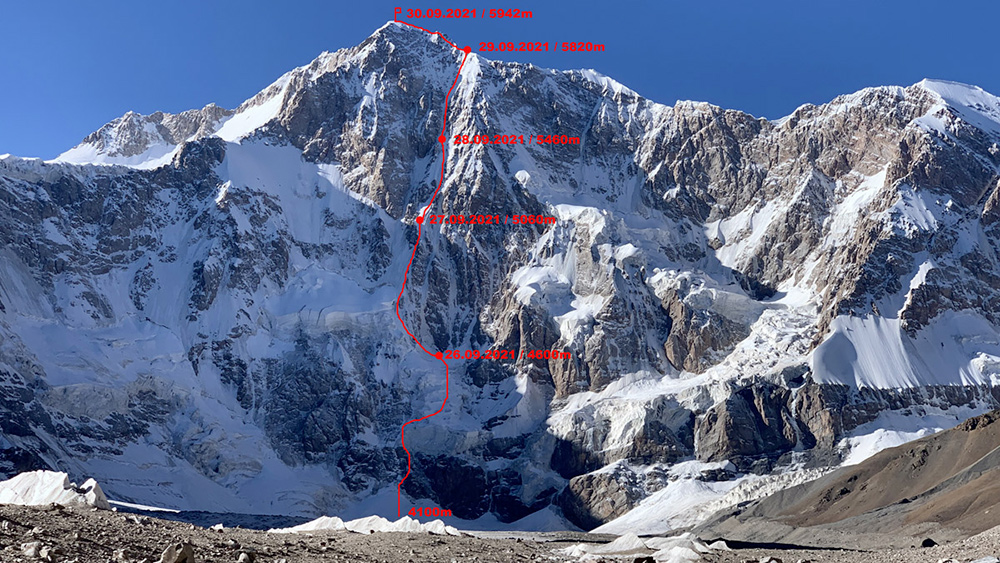 The 2021 line on the north face of Pik Kosmos, showing bivouac sites and elevations.
Gukov Collection 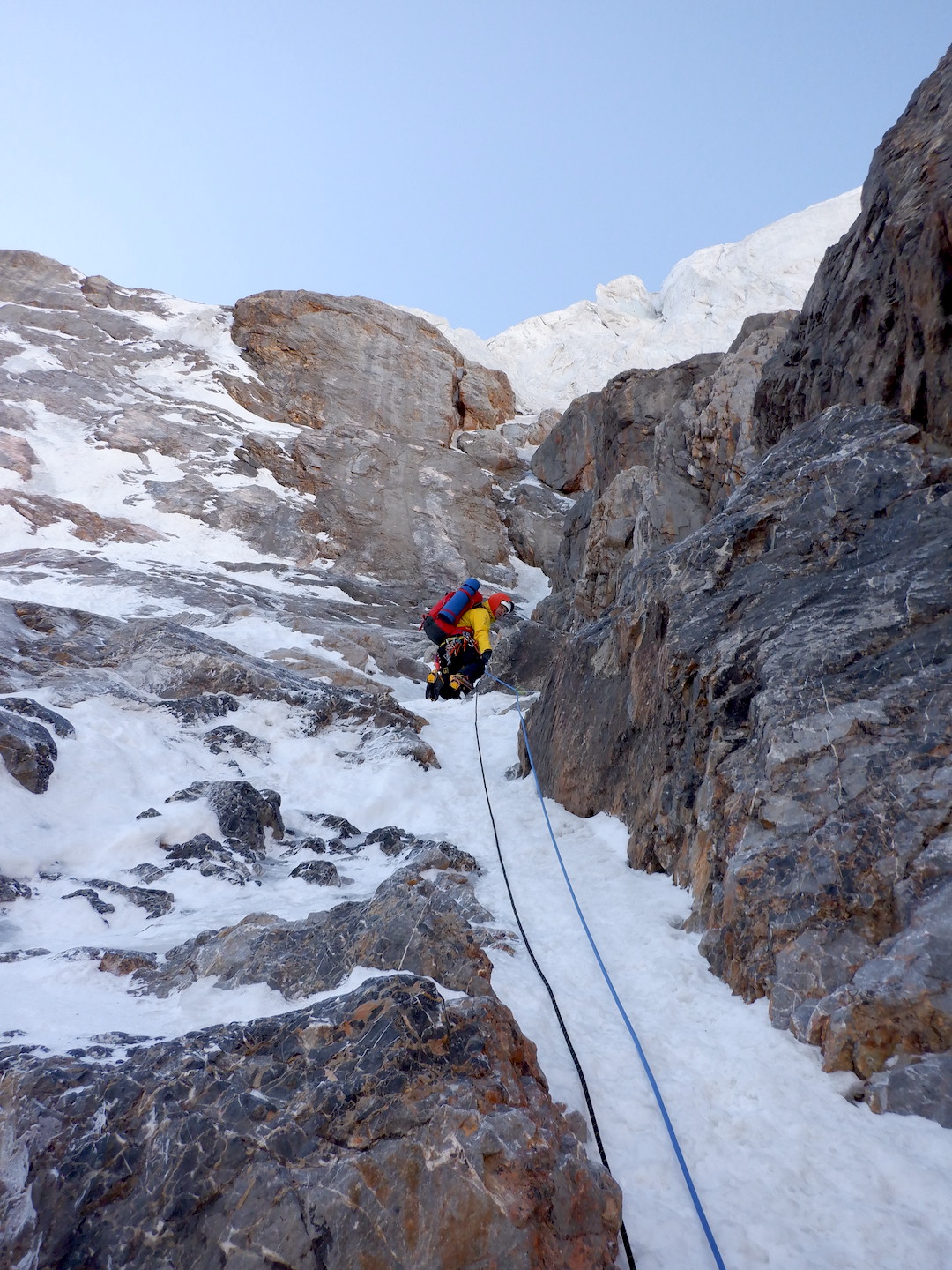 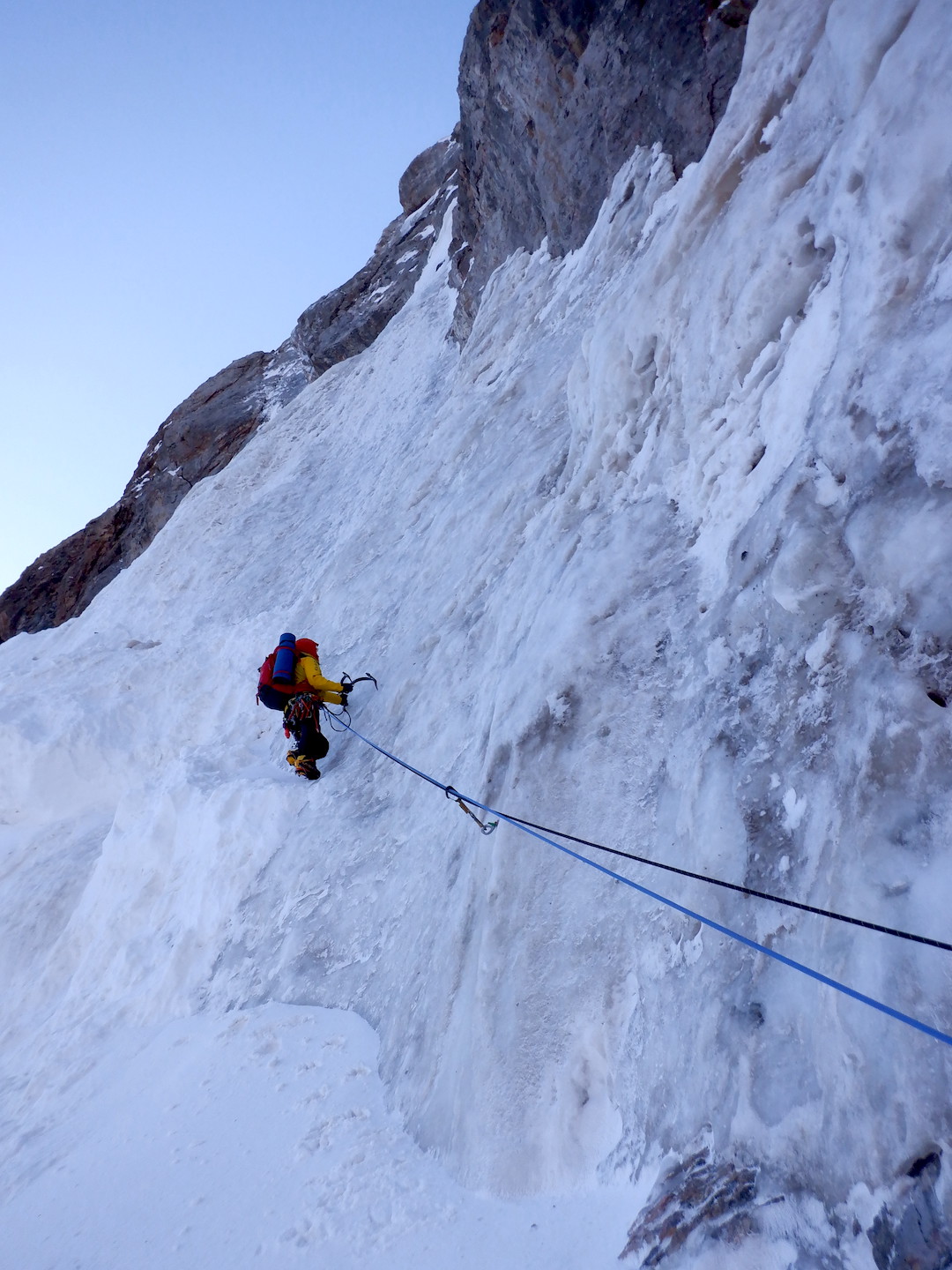 Climbing on the first day on the north face of Pik Kosmos.
Gukov Collection 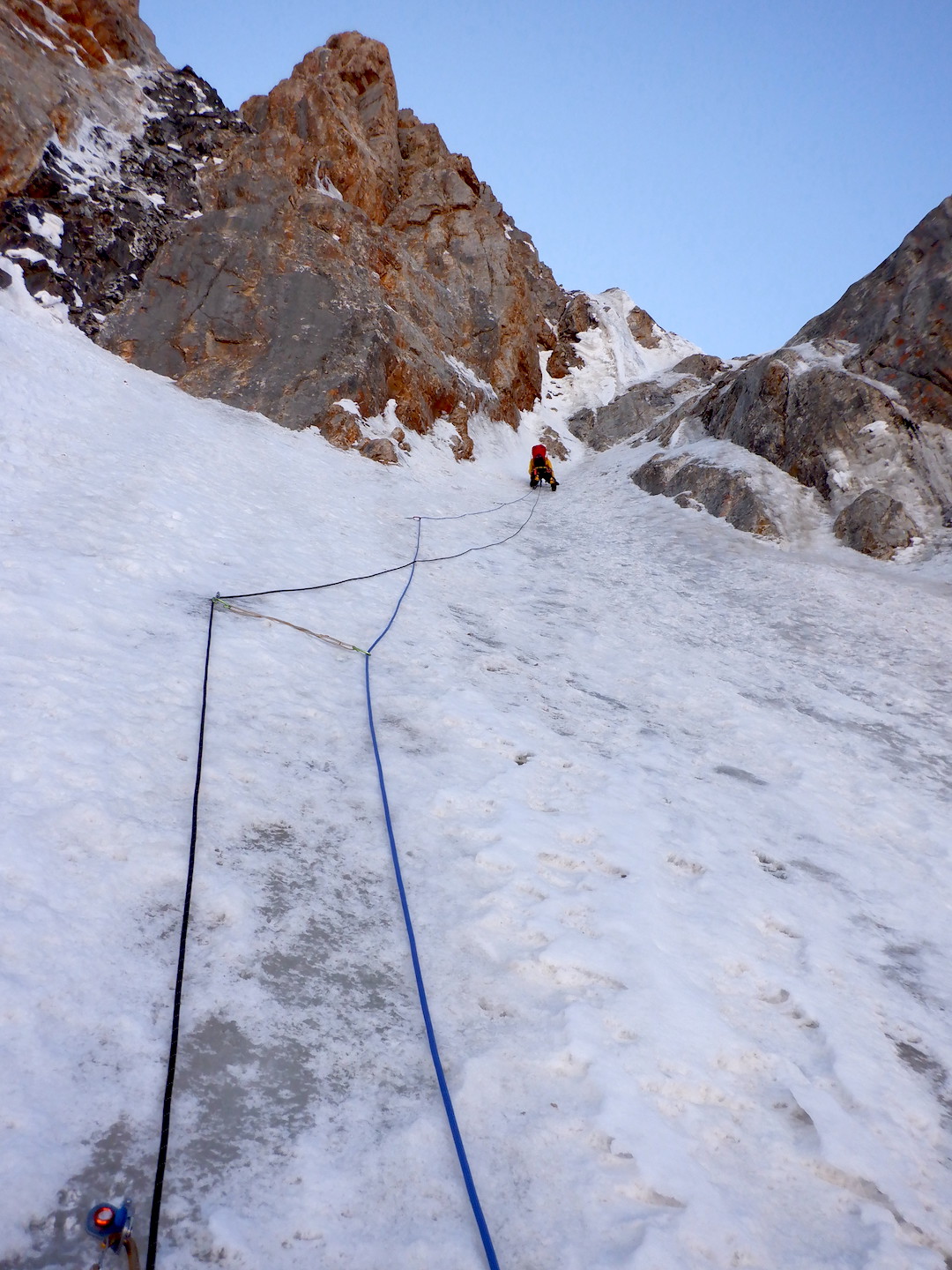 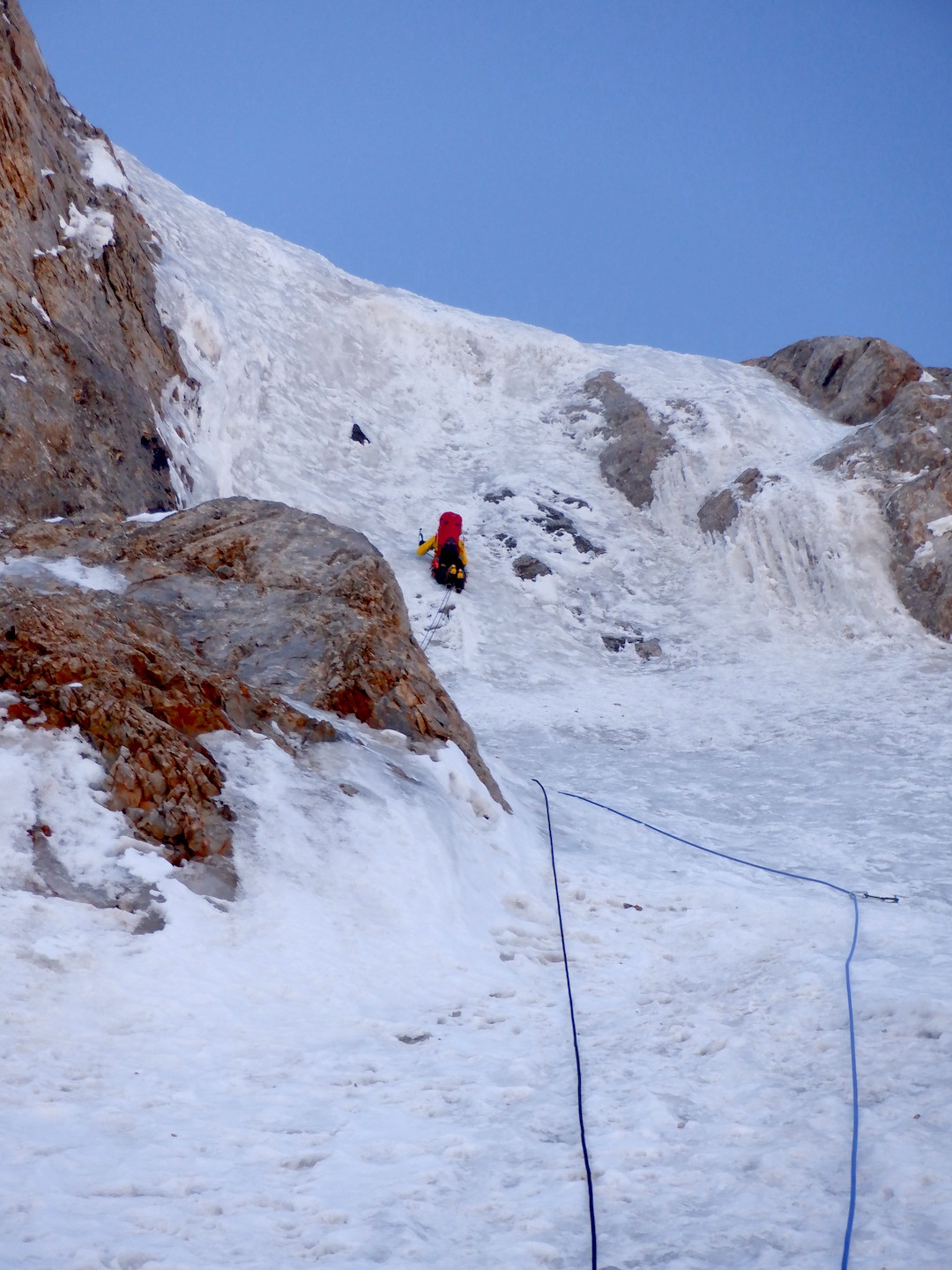 Climbing on day three on the north face of Pik Kosmos.
Gukov Collection 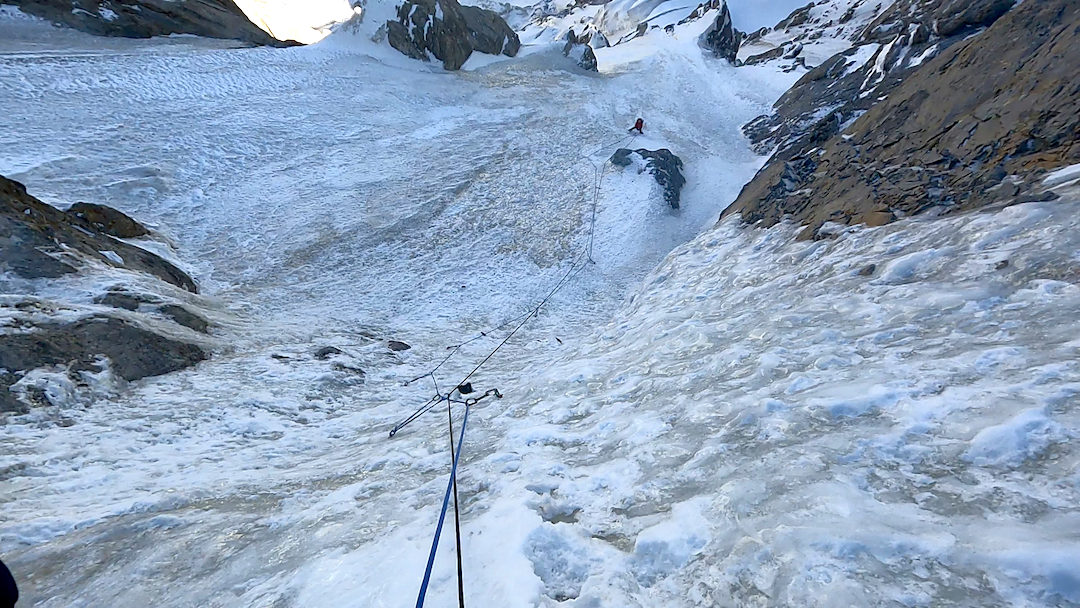 Looking down on day three on the north face of Pik Kosmos.
Gukov Collection 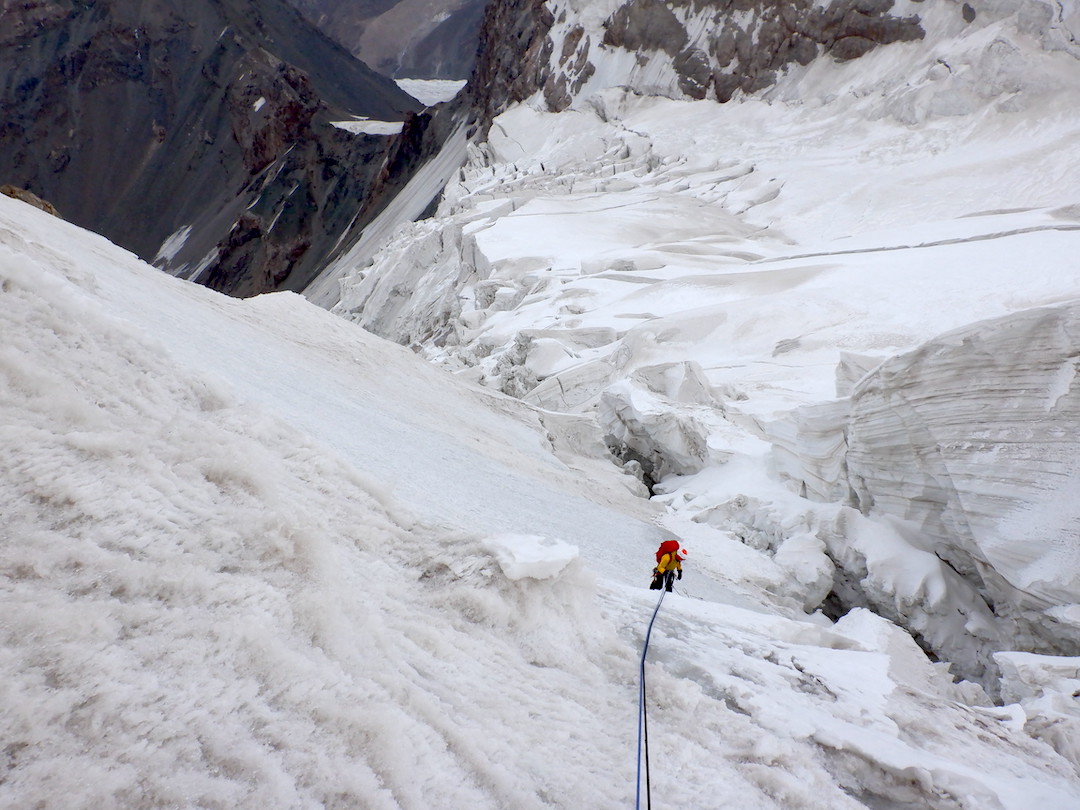 During the long descent of Pik Kosmos.
Gukov Collection 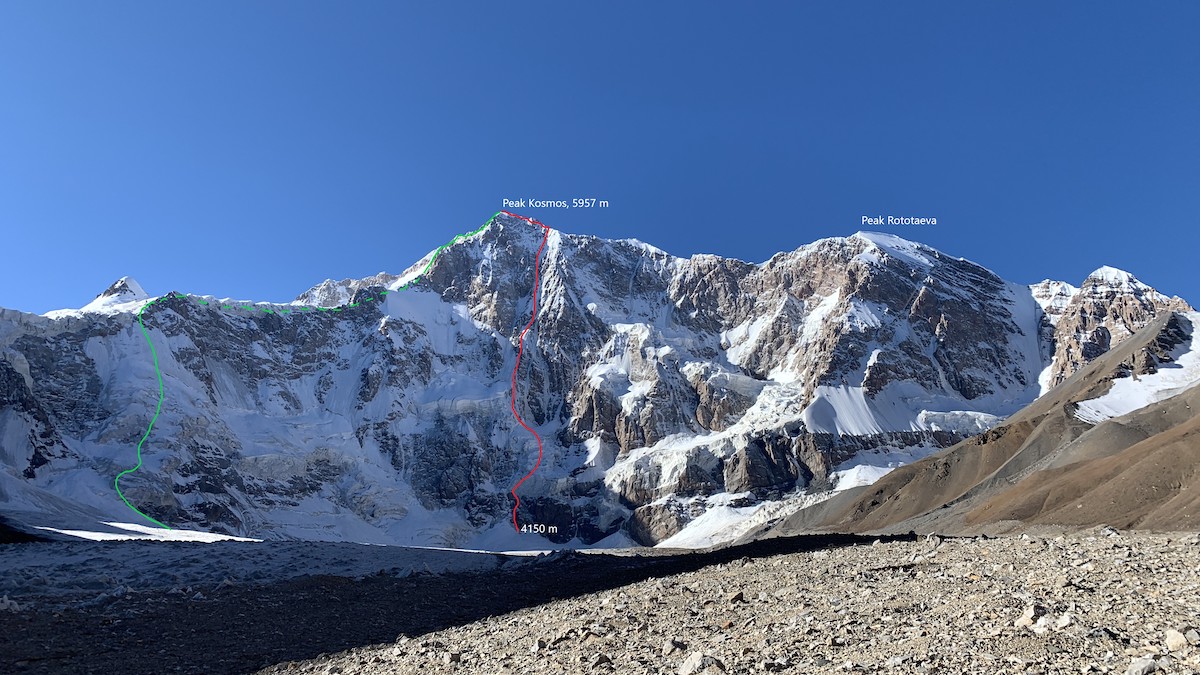 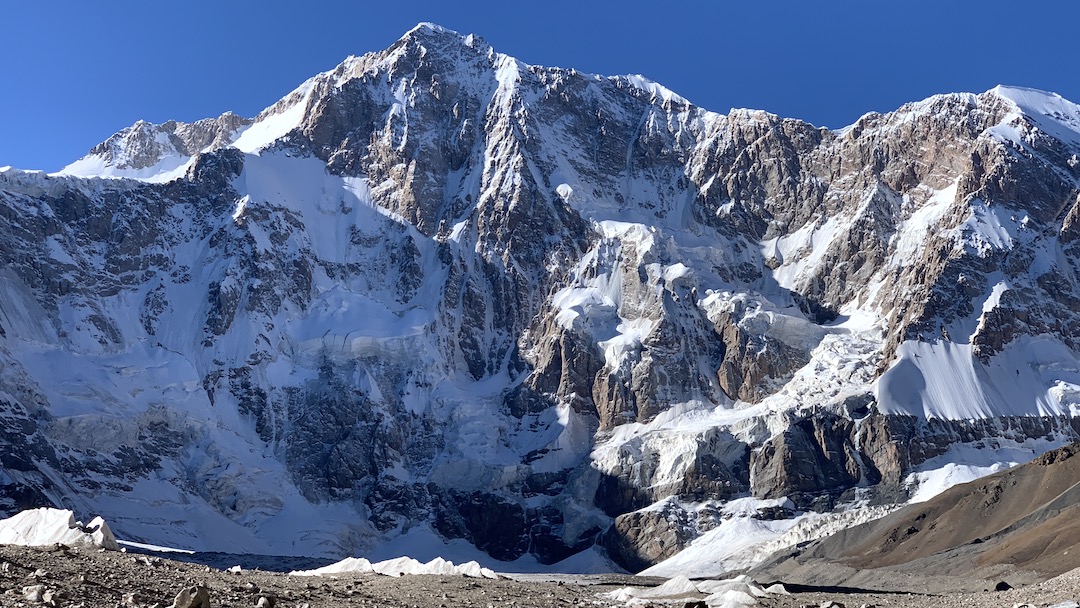 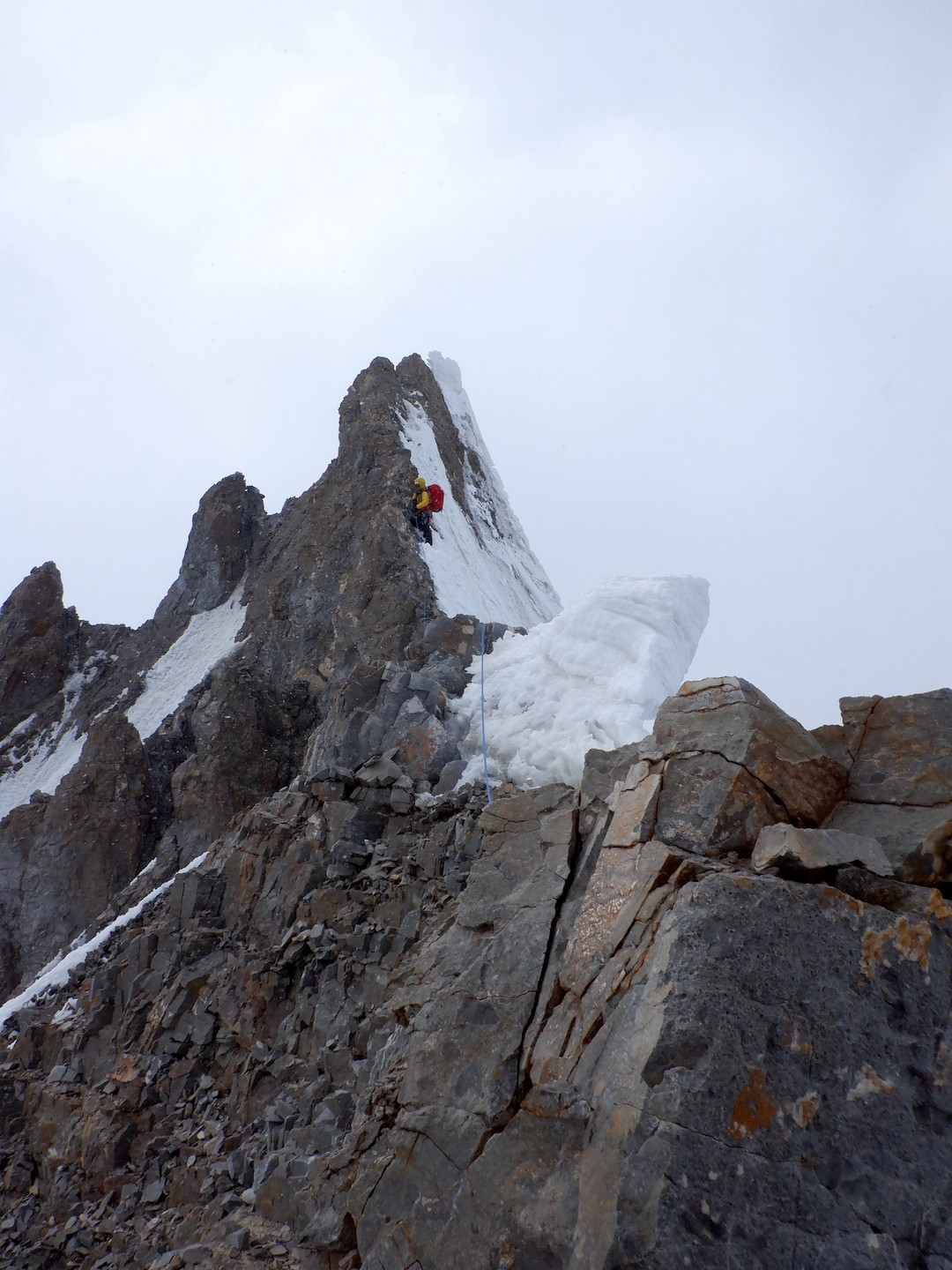 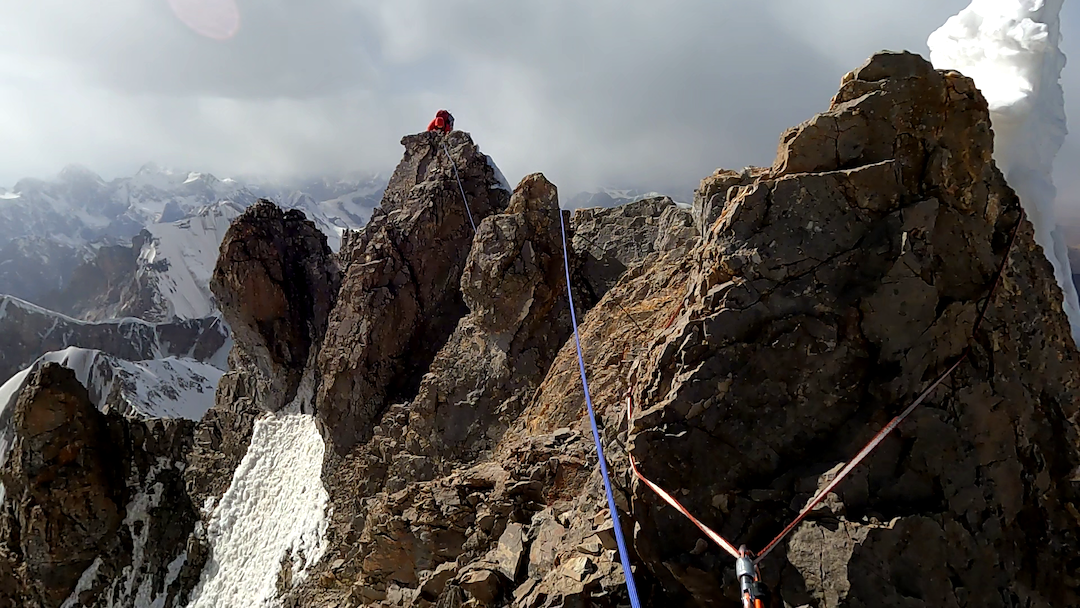 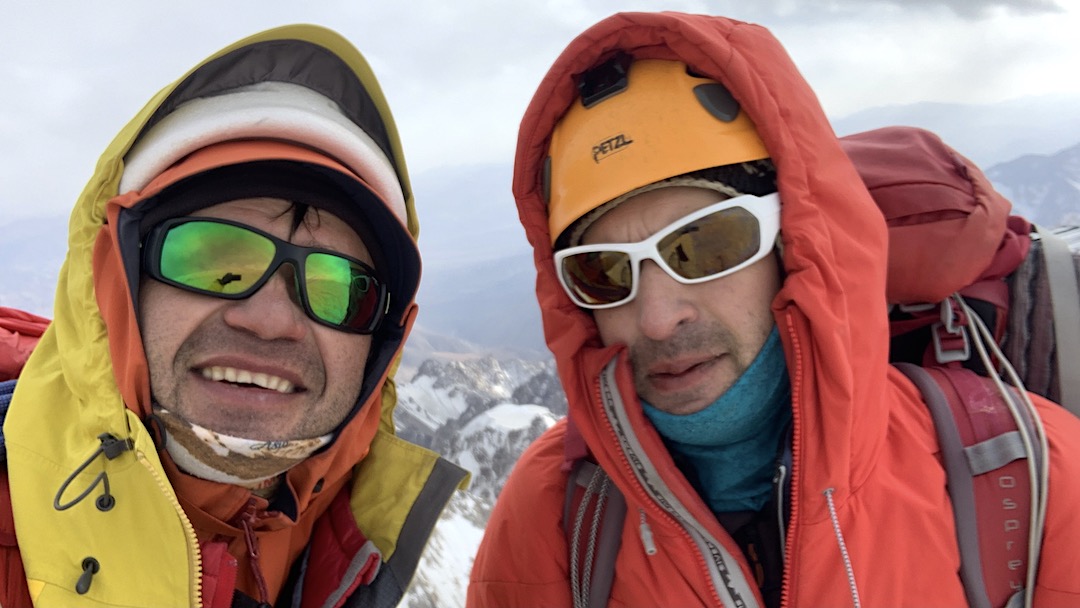 The 2021 line on the north face of Pik Kosmos, showing bivouac sites and elevations.
Gukov Collection

Climbing on the first day on the north face of Pik Kosmos.
Gukov Collection

Climbing on day three on the north face of Pik Kosmos.
Gukov Collection

Looking down on day three on the north face of Pik Kosmos.
Gukov Collection

During the long descent of Pik Kosmos.
Gukov Collection