Siren Tower and Other First Ascents

We didn’t know where we were going as we sailed out of Brittany, France, on July 8. The course was set generally for the east coast of Greenland, but the specific destination would depend on where the other passengers of our two-masted, 24-meter sailboat, Kamak, would be able to fly in to join the boat. “Don’t worry, if you drop us off in a fjord with some boulders, we will be happy. If there are big walls, it’s a bonus,” I told Jean Bouchet, the French guide and driving force of the Kamak project. Just to be in a beautiful wild setting for a long period of time would be a huge privilege.

We were a team of four climbers: Nicolas Favresse, with whom I have shared more than 25 years of adventures; Aleksej Jaruta, a talented 23-year-old Swedish climber with Russian roots; and Belgian climber and professional photographer Jean-Louis Wertz, who had joined Nico and me on previous expeditions in Venezuela and Pakistan.

Two awesome skippers and forces of nature were in charge of the boat: Gabriel from France and Vincente from Spain. The rest of the crew consisted of Bouchet, his 22-year-old daughter, Enora, and 75-year-old retired engineer Bernard, who gleamed friendliness. Once Bernard started talk- ing, there was no stopping him. His favorite subject was physics. On one occasion he grabbed our attention when he mentioned the Wall of Planck. “Where is it? How big is it?” I asked. “No, you idiot!” he answered, “the Planck Wall is a principle of quantum physics!”

On July 20, after two weeks of sailing, lots of vomiting, and some wobbly hangboard sessions, we four climbers were dropped off below the imposing towers of the Mythics Cirque, our home for the next 45 days. The most obvious objective was the steep north face of unclimbed Siren Tower. Although we thought about “acclimatizing” with something easier, the approach to this face consisted of a steep snow couloir; in the current temperatures (more than 20°C), the couloir would rapidly become objectively dangerous. We decided to fix ropes to an obvious ledge about 200m up.

As I lifted my heavy bag onto my shoulders, anticipating 10 days on the wall, I took a last look out to the fjord. Amid the icebergs I saw three dots moving toward us. We knew that Matteo Della Bordella, Silvan Schüpbach, and Symon Welfringer had also planned a climbing expedition to East Greenland, approaching their objective by kayaks. We ran down to the shore, stripped naked, and started playing and singing the Italian song “Ti Amo” (“I love you”). It must have been pretty cringy for them to paddle into a remote fjord and find four climbers singing in their birthday suits, but we got a good laugh out of it.

The climbing on the Siren proved to be sustained, with beautiful, physical cracks and big moves between good jams. The gneiss also offered surprising edges on the blank-looking sections, making the climbing easier than expected. On our third day we felt ready to push to the top. Until then we had onsighted most of the pitches, but one had resisted our efforts. A steep finger crack led to a disappearing seam, which offered a last piece of protection before a blank slab and a committing dyno. While jumaring the fixed rope, Jean-Louis noticed an easier line farther right. Before our attempt to reach the summit, we first climbed this easier variation.

The upper section of Siren Tower had decomposing stone, and every move required the delicacy of disarming a ticking bomb. “Erm, I’m a little bit out of my comfort zone,” Aleksej admitted. Nico brought us safely to a ledge at the top of a broken pillar, from which I puzzled my way past the “Eye of Sauron,” an intimidating big hole that looked like it had been blasted into the wall. After four more long, easy pitches, we stood on top of the tower, likely the first human beings ever there. We named the route Wall of Planck (700m, 16 pitches, 7b+; Aleksej freed the 8a Jaruta Variation during our descent).

Back at our portaledge camp, we were woken by the Italian-Swiss-French team climbing a line about 30m to our left. It might seem strange that in this extremely remote area, two teams ended up on the same wall of a previously unclimbed spire. On the other hand, maybe it’s not so surprising, because it is one of the steepest and most spectacular faces in the area.

While rappelling Siren Tower, we had noticed two separate lines on Aurora Tower, the peak directly opposite. [Aurora Tower was first climbed and named in 2016 by an international team that summited by the southwest ridge, outside the Mythics Cirque. In 2018, a French party climbed the right side of the southeast face and the upper northeast ridge.] After a few rest days at base camp, we decided to split into two teams and make a race out of it. The rock, paper, scissors oracle put Nico and Aleksej up against Jean-Louis and me. We climbed all day in glorious sunshine above a sea of clouds, and when Jean-Louis and I reached the top after about eight hours, there was no sign of the others. The Olympic Games were taking place in Tokyo at that time, but big-wall speed climbing was not represented, so we were happy to have achieved The Olympic Speed Climb- ing Record (550m of climbing, 11 pitches, 7a+). An hour or so later we were joined by Nico and Aleksej, who had completed the Russian-Belgian Route (550m of climbing, 10 pitches, 7b).

Back at base camp, we were able to catch up with the other three, who had finished their new route on Siren Tower (see report here). We opted to focus next on Ataatap Tower (a.k.a. Father or Daddy tower), the biggest feature in the Mythics Cirque, and decided to try the steeper wall to the left of Built Fjord Tough, the original Libecki-Pringle route on the northeast face (AAJ 2013).

Aleksej, Nico, and I switched leads on very serious climbing: big loose flakes, bad protection, runouts, and slimy rock. On one pitch we had to carefully climb around a huge, hanging tooth of rock. When we finally reached a big ledge at 500m, all three of us were mentally drained, and while it would have been nice to continue direct, we opted to traverse right along the ledge and finish up the dihedral of Built Fjord Tough. In comparison to what we had climbed, this was like a welcoming motorway, with straightforward route-finding, good protection, and even the occasional bolt. We ran to the summit, waited for sunrise, and then took the long walk down the far side, reaching base camp about 24 hours after leaving: Daddy’s Sweet Tooth (800m of climbing, 17 pitches including the last seven of Built Fjord Tough, 7b).

By mid-August the nights were lengthening rapidly, and we had no clear idea when Kamak would return to collect us. While there were certainly challenges left in the Mythics Cirque, we were surrounded by unlimited wilderness and were hungry to explore. We therefore made three little “expeditions,” on which we used our inflatable double kayaks to move deeper into the fjord.

On the second kayak excursion, I realized I had forgotten my harness. I improvised one from a length of cord, but needless to say it wasn’t comfortable. I stuck to seconding and ordered, “No hanging belays!” Nico and Aleksej insisted the route be called The Chastity Belt of Sean (250m, five pitches, 6c), and the unnamed formation Chastity Tower (66°15´20.53"N, 35°41’58.66”W).

For the third little expedition, we kayaked for two hours and then walked up a big green valley. After about five hours, Nico and Jean-Louis found a spire that inspired them (66°25’12.58"N, 35°35’15.92”W). They encountered some incredible pitches littered with big huecos, and in 13 hours reached the summit of what they named Myope Tower by the route Le Sentier des Myopes (650m, 14 pitches, 7a+).

Aleksej and I continued walking for another five hours until we found a needle with great rock and started up it. As I was climbing an easy offwidth, my foot slipped and I went flying through the air. I hit a small ledge and felt numbing pain shoot through my right ankle. I was unable to put any weight on it. The situation was serious. We faced 10 hours of hiking over difficult glaciers and moraine to reach our kayaks, followed by a two-hour paddle to the comforts of base camp. While Aleksej carried all the gear, I stumbled along with the help of my trekking poles. Even though there was a lot of pain, I accepted my fate and enjoyed the challenge.

A few days later, Aleksej and Nico returned and finished this climb on what they named Maculi’s Tower (66°26’31.64”N, 35°28’21.98”W). Gabriel, the French captain of Kamak, had insisted on performing the macoui ritual upon leaving Brittany to offset bad luck associated with the boat’s name change; it included sailing three times in a circle, blowing the horn, and opening a bottle of rum. Maculi’s Ritual (our interpretation of “macoui”) was 600m, 7b, and climbed in 13 hours.

By September 9, when we finally boarded Kamak, night and day were of nearly equal length and a thin layer of ice appeared on the sea each morning. Twenty-three days after we left base camp, with the coast of Brittany almost in sight, the wind blew gently into our sails and the sun came out. A group of dolphins was playing with the bow, and now and again one of them would tilt sideways and look up at us. They were whistling, squeaking, singing. You would almost believe they were talking to us. You would almost believe that they knew. 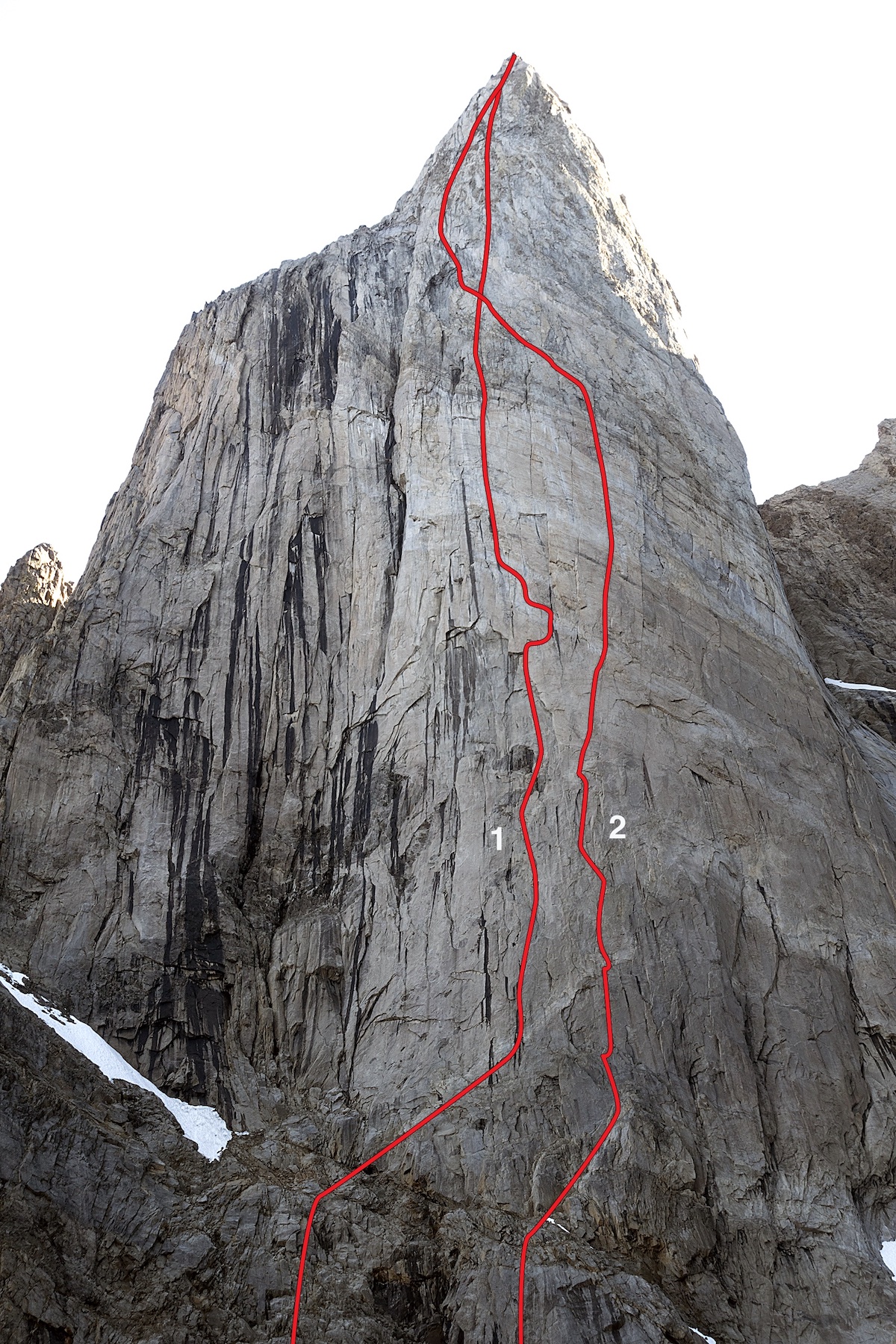 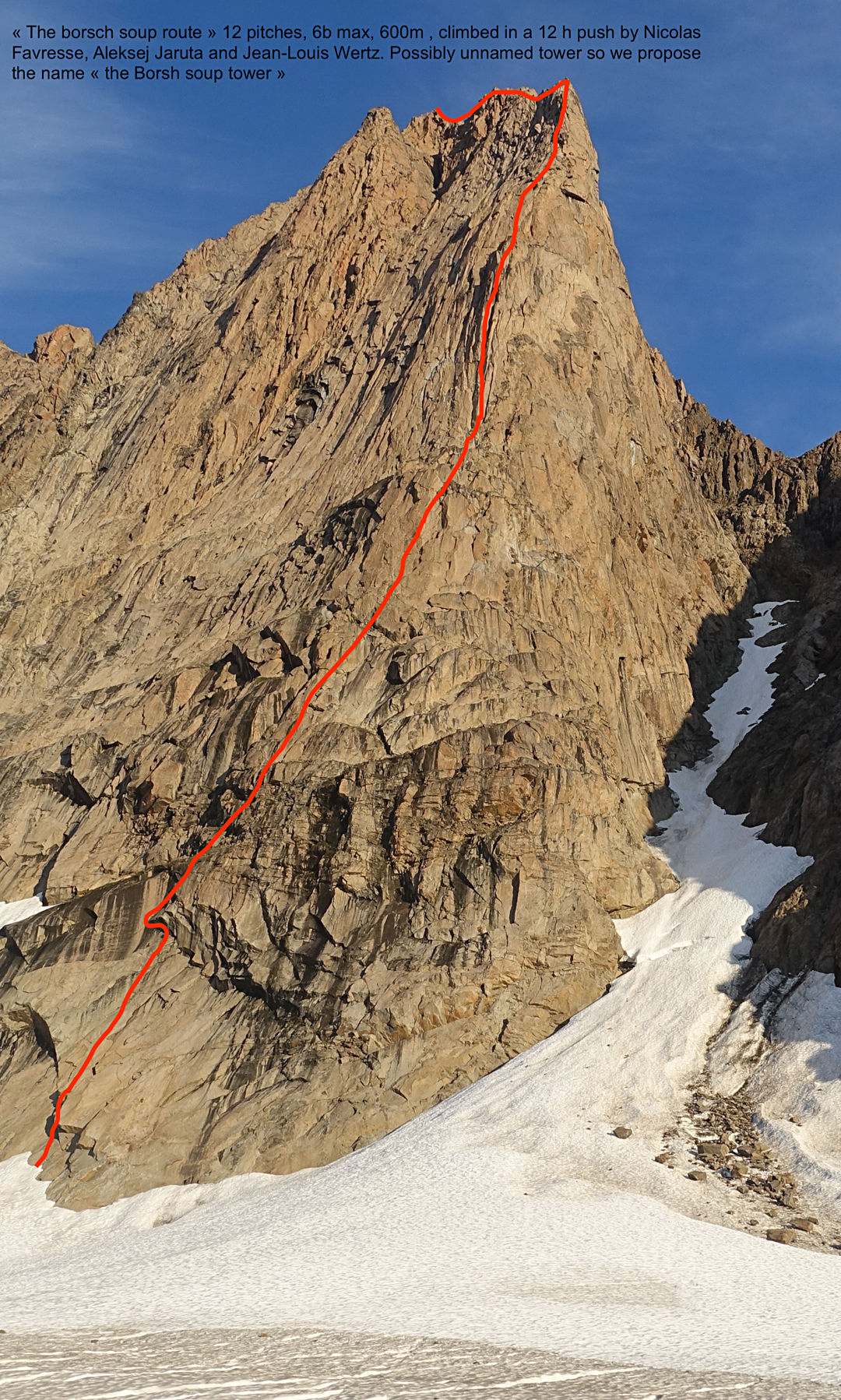 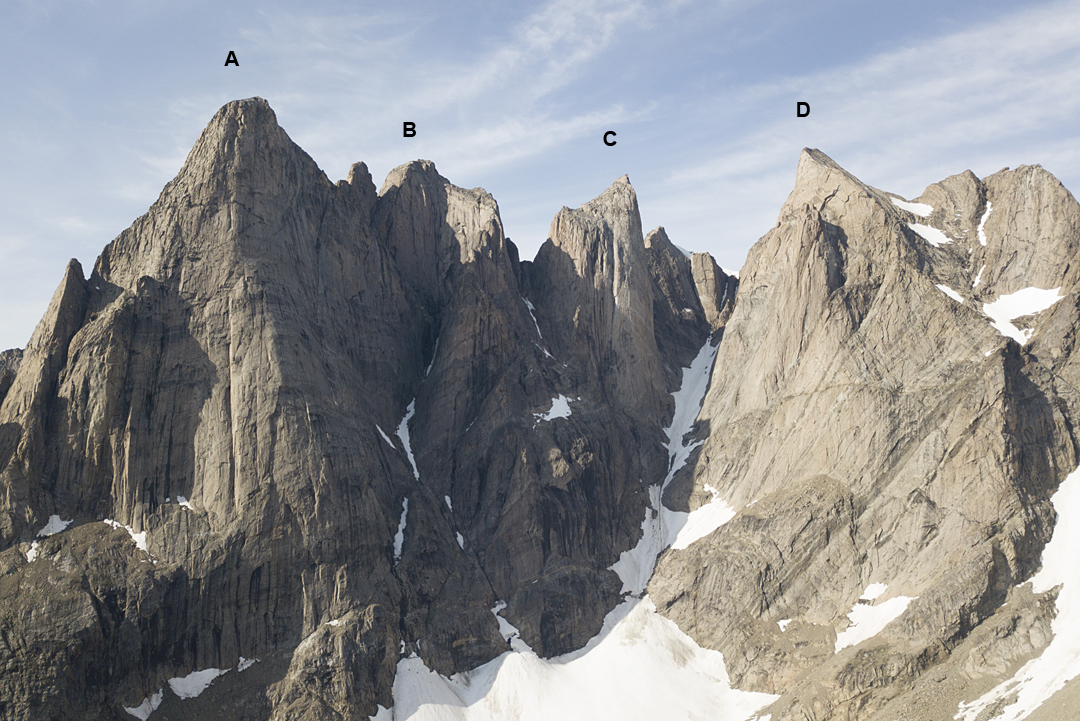 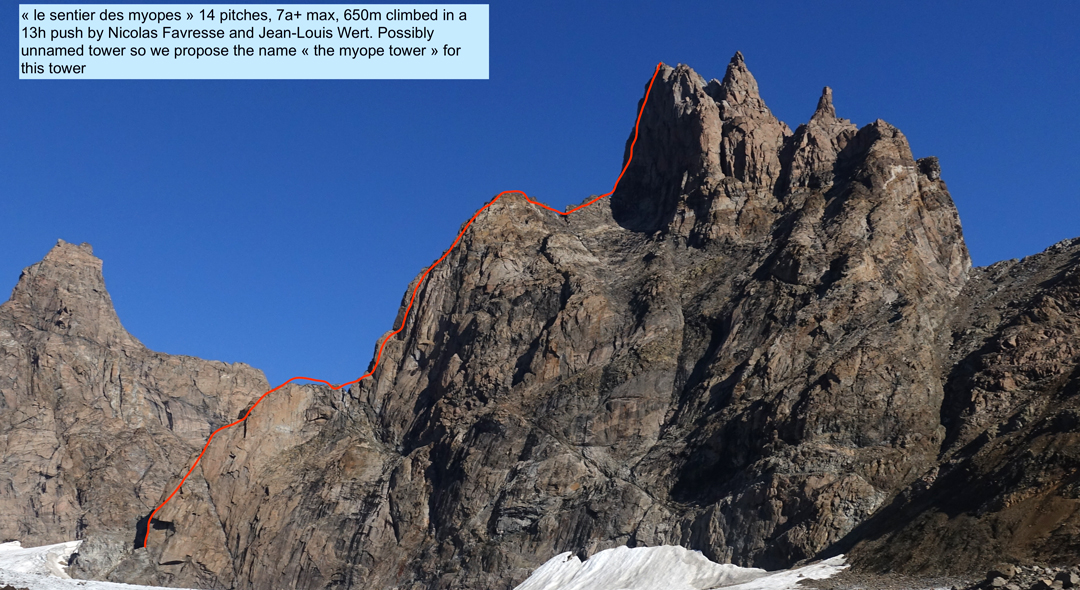 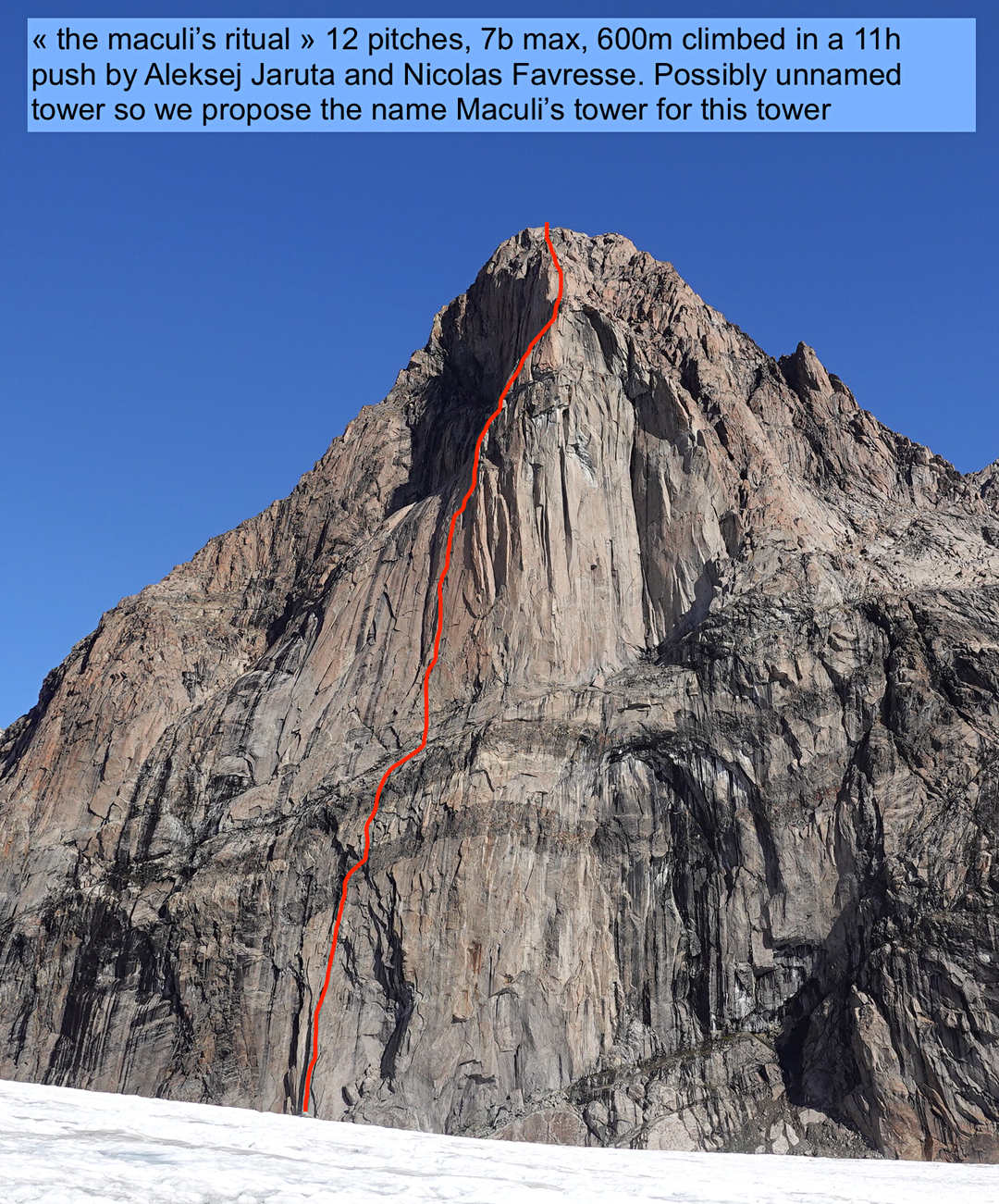 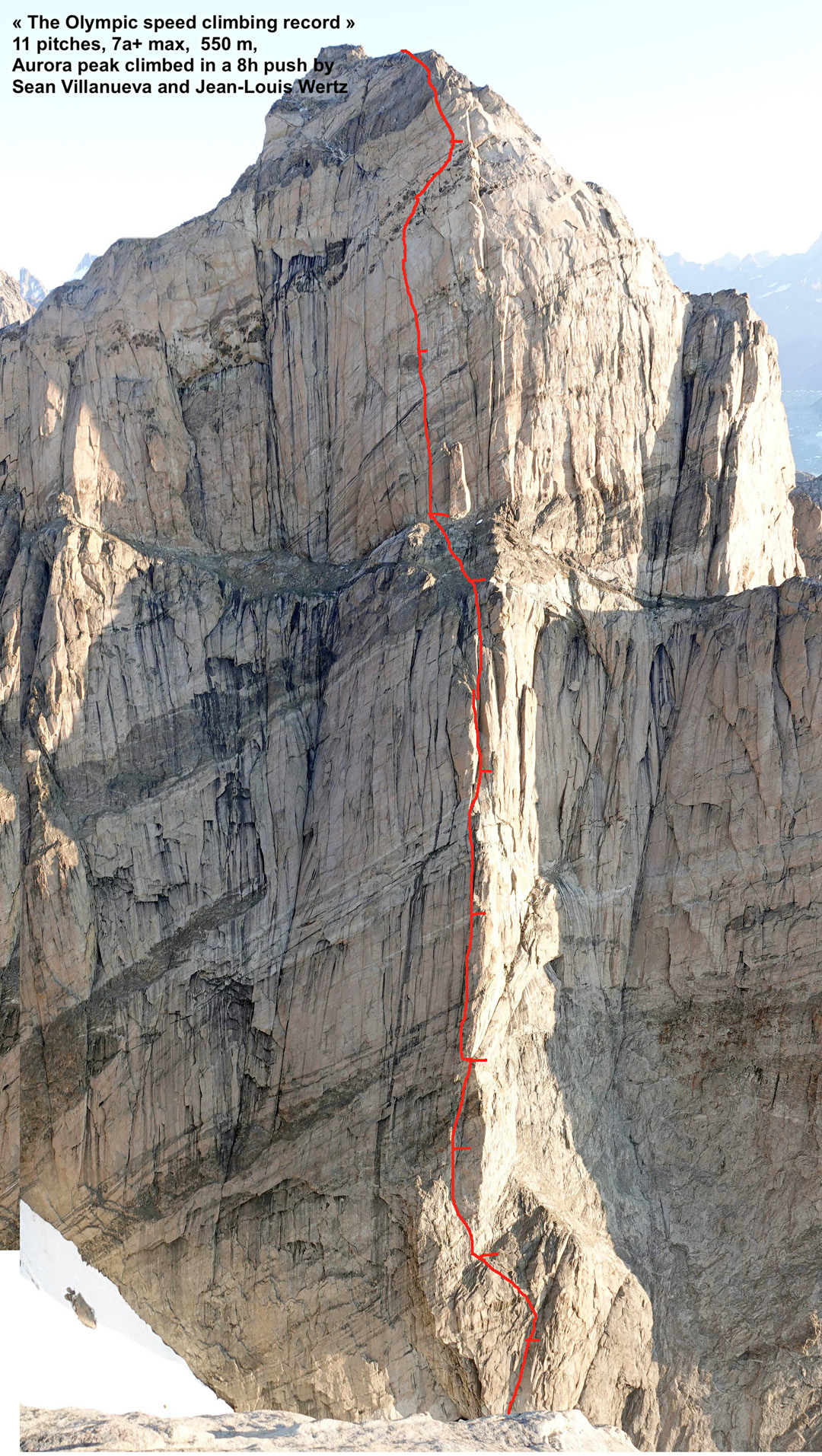 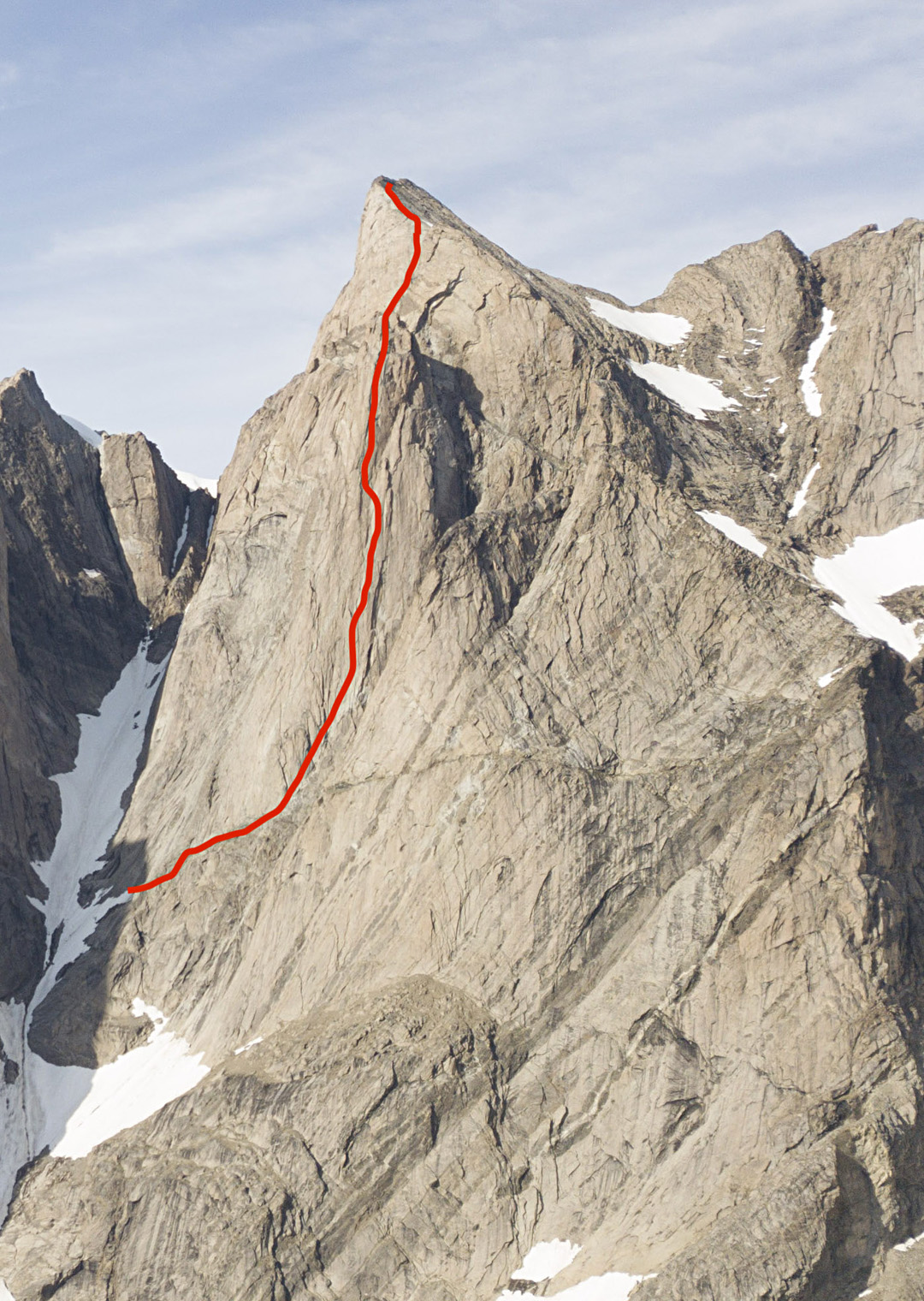 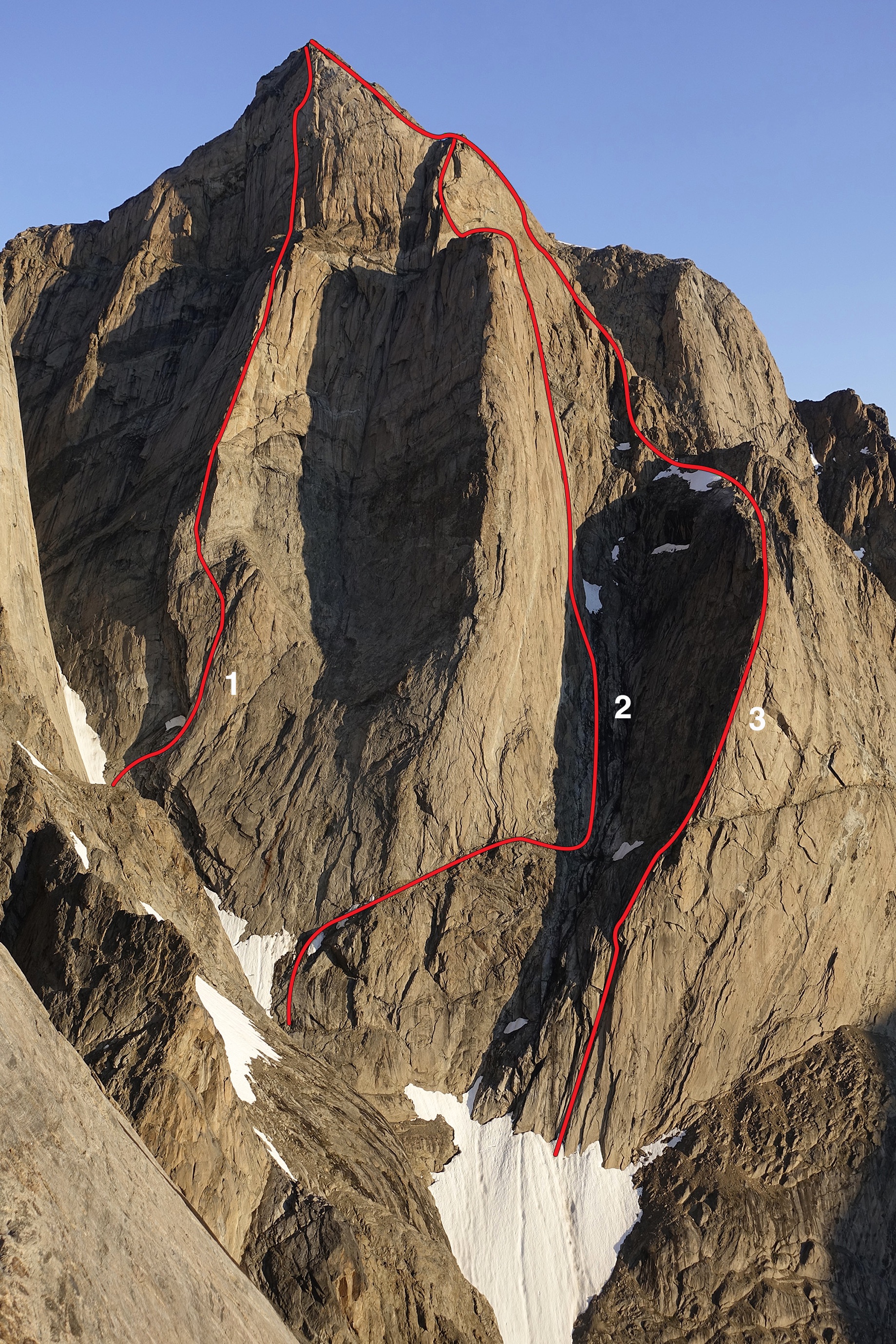 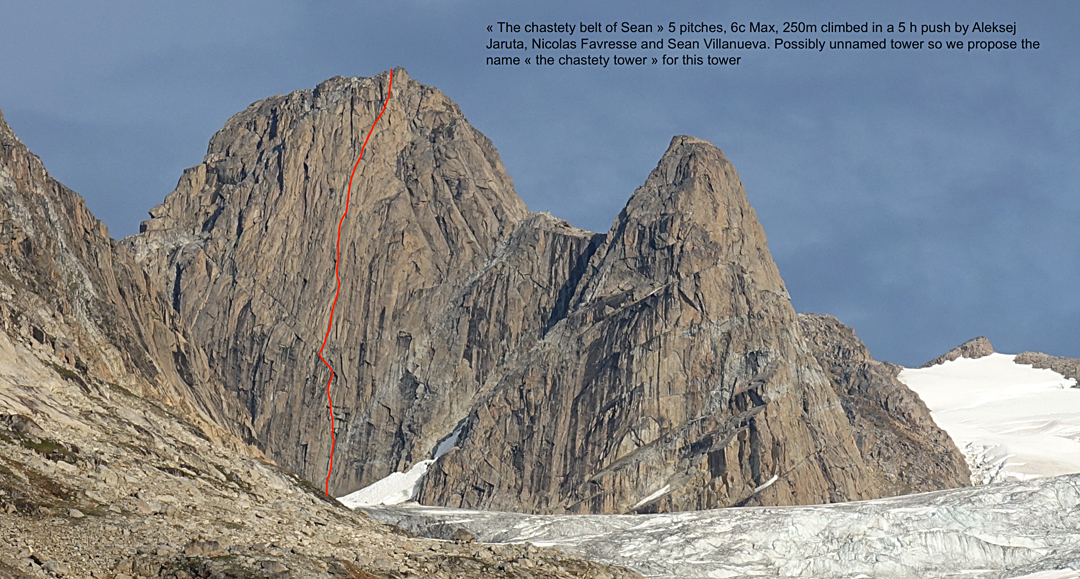 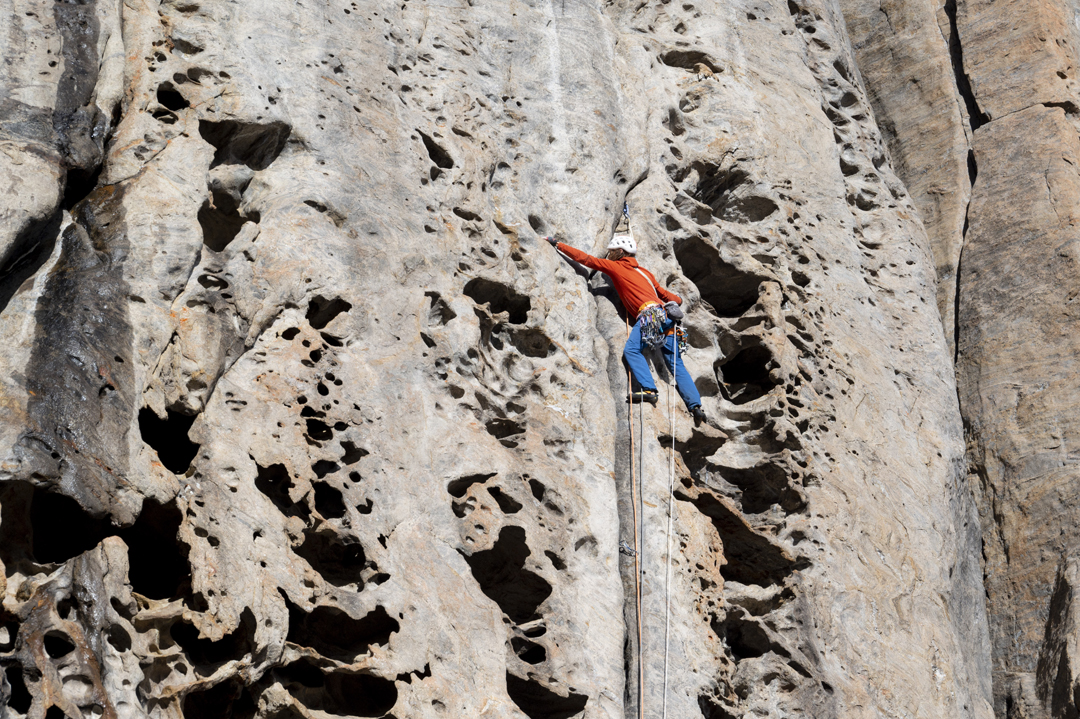 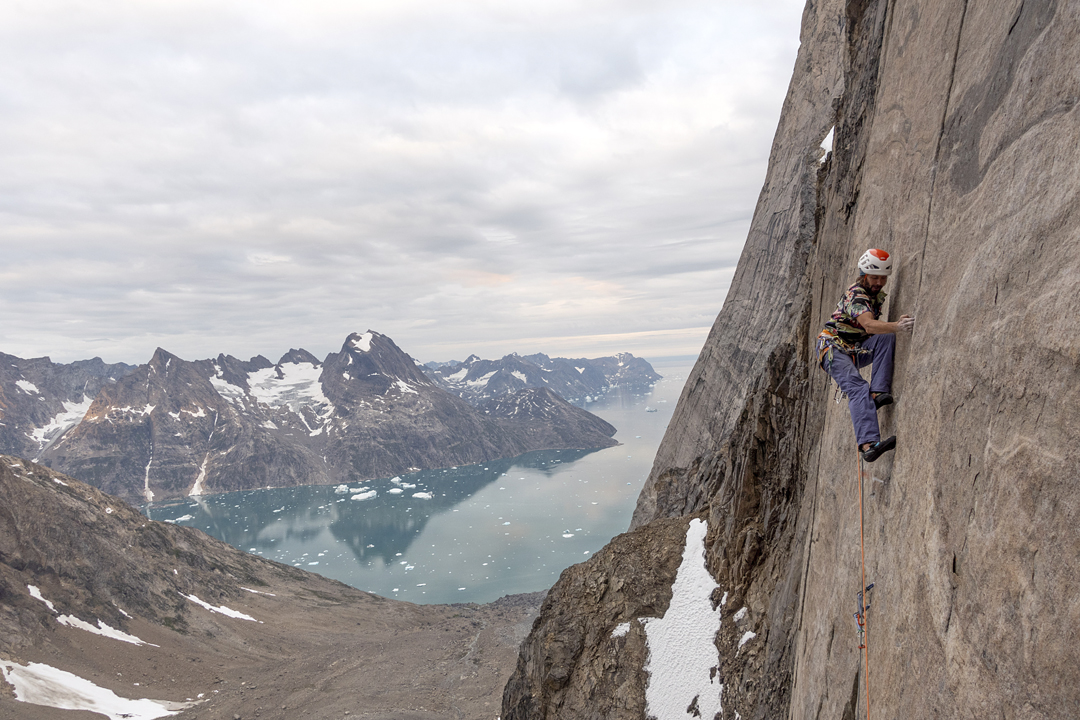 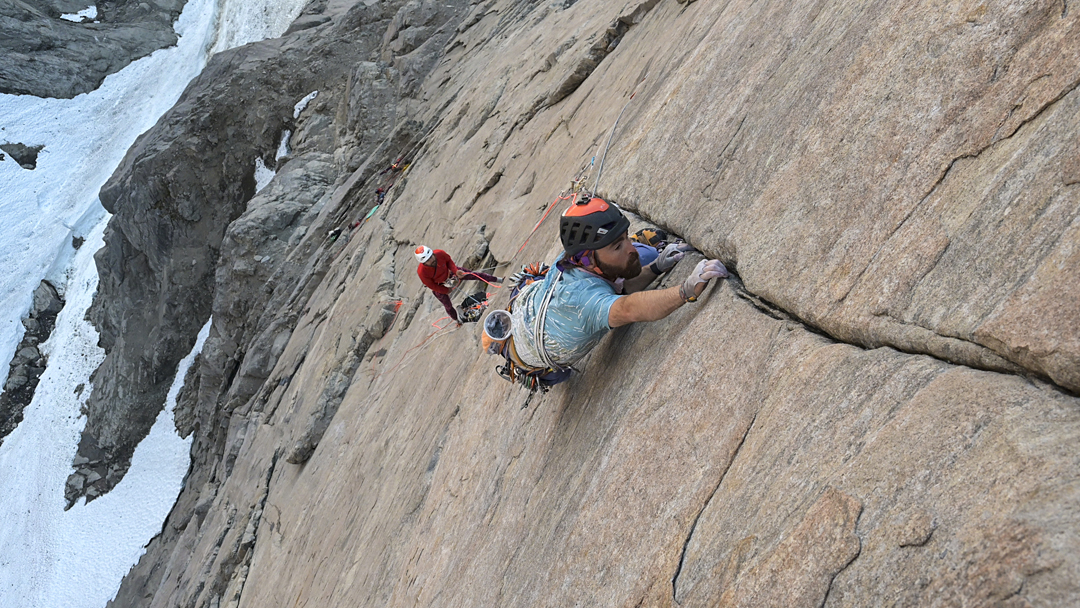 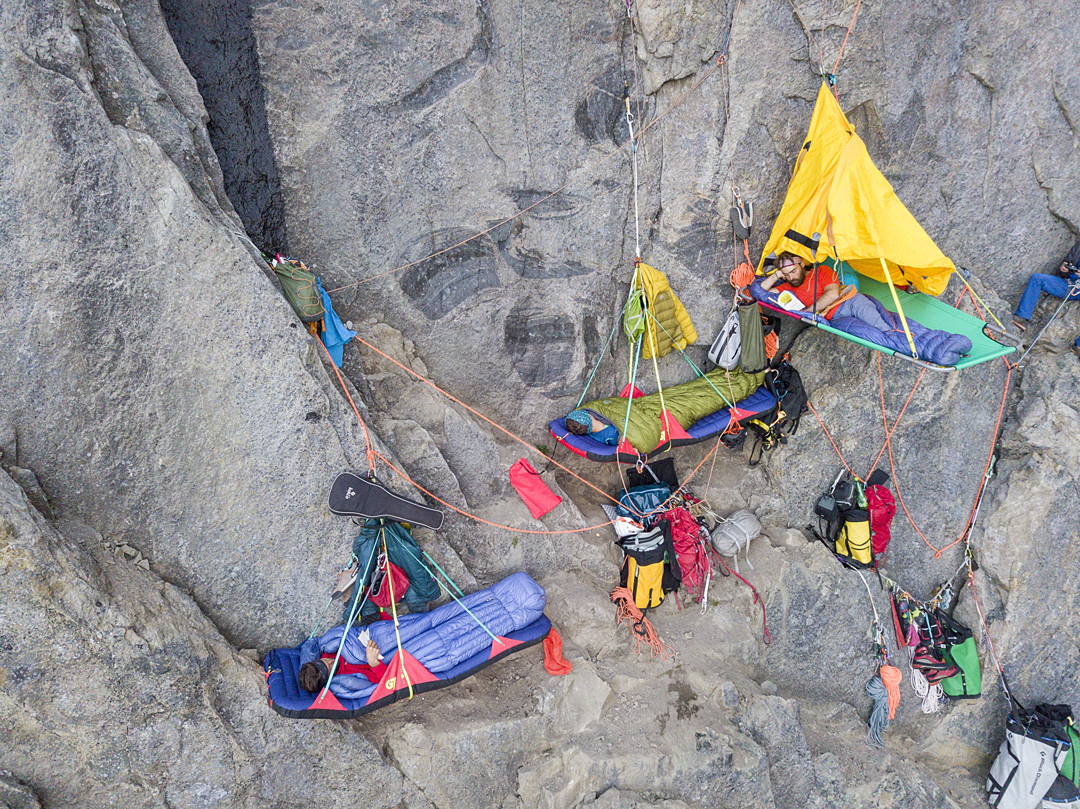 Camping on the northeast face of Siren Tower during the first ascent of The Wall of Planck.
Jean-Louis Wertz
Previous Next

Camping on the northeast face of Siren Tower during the first ascent of The Wall of Planck.
Jean-Louis Wertz
Previous Next