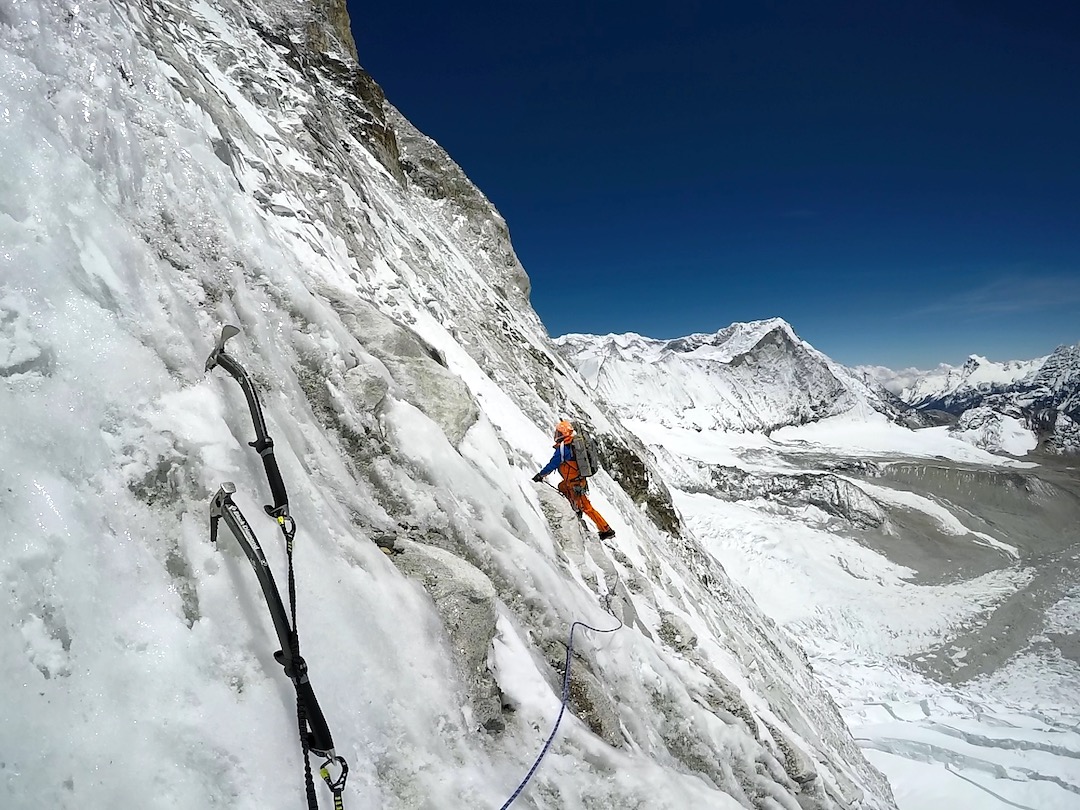 I fell under the spell of the west face of Baruntse (7,152m) in 2001 during an expedition to attempt Kyashar, about 20km to the southwest. As I stared at the 1,300m face of interlacing snow, ice, and rock features, I began looking for lines of weakness. Before long, I had identified a clear and distinct path. But I buried the notion of climbing it; some ideas need time to percolate before one’s awareness and courage are equal to them.

I exhumed the idea in 2019, when I once again passed beneath the west face of Baruntse. Zdeněk Hák and I were in Nepal to make the first ascent of the complete northwest face of Chamlang. Even before we had returned to the ground, after summiting via our new route UFO Line, I was scheming for Baruntse.

The pandemic put those plans on hold until the spring of 2021, when I teamed up with Radek “Ráďa” Groh. Ráďa is 15 years younger than me, but we had already tested our partnership, climbing a hard route in Peru together in 2019.

For 15 days Rada and I acclimatized as we trekked through the heart of the Nepal Himalaya, crossing several 5,000m-high passes around Gokyo and then over the very high pass of Amphu Lapcha to the Hongu Valley. We arrived at Baruntse base camp on May 13. There was absolute silence except for the cracking glacier and occasional avalanche, and not a soul to be seen. And there, in front of us, was the west face.

This face had only one established route, climbed by a Russian team in 1995. Our line was to the left of theirs and completely independent. A Czech pair had attempted our line in 2013 to around 6,600m but never returned from their attempt.

Already well acclimatized, we just had to wait for a four-day window of good weather, which took a while. But on May 21, our friend and meteorologist Alena Zárybnická sent us a good weather report on the satellite phone, which sent my blood-pressure sky-high. We packed gear and food for six days and immediately set off up the Hongu Glacier. Our first bivouac was just below an overhanging serac at 5,800m, which offered protection against any “hellos” that might swoop down upon us during the night.

The next morning we started up the 2km-wide face and, from the very first moments, encoun- tered challenging conditions. Our axes and crampon points squeaked into the hard ice like nails on a chalkboard. In recent years, the west face has undergone a major change; a lot of the ice and snow I saw plastered on the face 20 years earlier had melted, leaving only the hardest shell. Looking at the pillar climbed by the 1995 Russian expedition, I can’t imagine anyone repeating it in the current conditions.

The terrain stayed difficult throughout the day, and we made pathetic progress. After ten hours of constant front-pointing, we stopped to bivy at 6,200m, about 100m lower than we’d hoped. We dug a small platform into a ridge of solid frozen snow, reminiscent of an organ pipe. The spot was so small that we couldn’t lie down, only sit with our legs hanging over the abyss. We draped the tent over us without poles, like a canopy. It was a miserable night.

Good weather greeted us on May 23. We climbed to an ice sheet that led us diagonally left and then continued up hard ice grooves separated by ribs of soft snow. The climbing was monotonously tiring. Thankfully, the hard work paid off, as we made up for our poor progress of the day before. In the late afternoon, we found a small but comfortable space for the tent on a snow rib at 6,500m. Ráďa and I exchanged hardly any words, thinking only of how tired, hungry, and excruciatingly thirsty we were. We soothed our parched throats with tea, stretched out, and went straight to sleep.

May 24 brought the most difficult part of the ascent, a 250m barrier of broken rock. It took us a while to decide where to go. The climbing was technical and slow—which only got harder when it began to snow. We had hoped to reach the ridge, but were forced to bivy again on the face. Fortunately, we found a rocky promontory at 6,900m that perfectly matched the size of our tent, jutting out so the torrents of spindrift flowed by on either side. Once inside, we crawled into our sleeping bags, which had absorbed moisture during the previous nights and then frozen hard; still, it was best to lie down and steam inside them.

I pulled out my satellite phone to find a message from Alena: “Damn, the weather wasn’t supposed to change today. It shouldn’t have been getting worse until tomorrow afternoon.” We had been half a day slower than planned, and the weather had deteriorated dramatically. There were no good options for retreat—the only way down was up. We hoped the weather would allow us to climb the final few tens of meters to the summit ridge the next day, and then we could descend via the normal route on the southeast ridge.

Suddenly, the satellite phone beeped with another message from Alena, bearing worse news. Now the forecast called for the weather to deteriorate even more the next afternoon, and possibly even more the day after that.

On the morning of May 25, it was cloudy with poor visibility, but we had to try to get off the mountain. We climbed the final mixed sections to the ridge and crossed over the summit around 4 p.m., covered in hoar frost, and then descended a bit and set up the tent at 7,100m with impending dread. Strong wind and driving snow hammered the thin tent walls during the night like a military bombardment.

Near dawn on May 26, everything seemed calm: Although the wind raged on, the tent was now completely buried in snow. We dragged ourselves into the storm and moved the tent a few meters. Whiteness all around forestalled any possibility of safe descent. We lay next to each other all day without saying anything.

Finally, on May 27, we felt like our luck might be turning. Around 10 a.m., the wind began to die and the fog started dissolving. We hastily packed the tent. As we started descending along the ridge, the sun shining through a wall of clouds created a diffuse light that was extremely disorienting, like a feeling of total drunkenness. There were no reference points, just shimmering white.

“But we must try to keep going or we‘ll kick the bucket here, Mára.”

“I know it‘s hard to accept, but there‘s nothing we can do, we have to wait.”
We kept up the discussion until common sense prevailed and we repitched the tent only a few tens of meters lower. Aside from trips outside to free the tent from snow, we waited and prayed. Everything was wet or frozen, and we felt the beginnings of frostbite. Moreover, we were out of food and tea. Thankfully, we still had some fuel to melt snow. We remained tent-bound all of May 28.

The weather eased some on May 29, and we climbed down the sharp, steep ridge, which was covered in deep unstable powder. We managed to descend about 750m by nightfall, before resigning ourselves to a ninth consecutive bivouac. Now very scared about serious frostbite, we slipped into a single sleeping bag to keep each other warm.

Before going to sleep I called our agency to request that a helicopter pick us up the follow- ing day. Between our physical state and the high avalanche hazard at the bottom of the face, we needed help. Plus, there was no one left at our base camp and no chance of anyone reaching us on foot with the deep new snow.

May 30 was a beautiful day—finally! We fine-tuned the coordinates with the helicopter pilot, started down again, and he picked us up around 7 a.m., freeing us from our icy hell.

We called our route Heavenly Trap and graded it VI+ M6+ 80°. It is the hardest climb I have done in the mountains. Ráďa and I dedicated the route to our two friends, Petr Machold and Kuba Vaněk, who lost their lives on the same face eight years earlier.

Translation assistance was provided by Lenka Strnadová. The author was interviewed about this climb for the Cutting Edge podcast (link below).

The Cutting Edge · Marek Holeček: His Greatest Challenge in Over 40 Expeditions 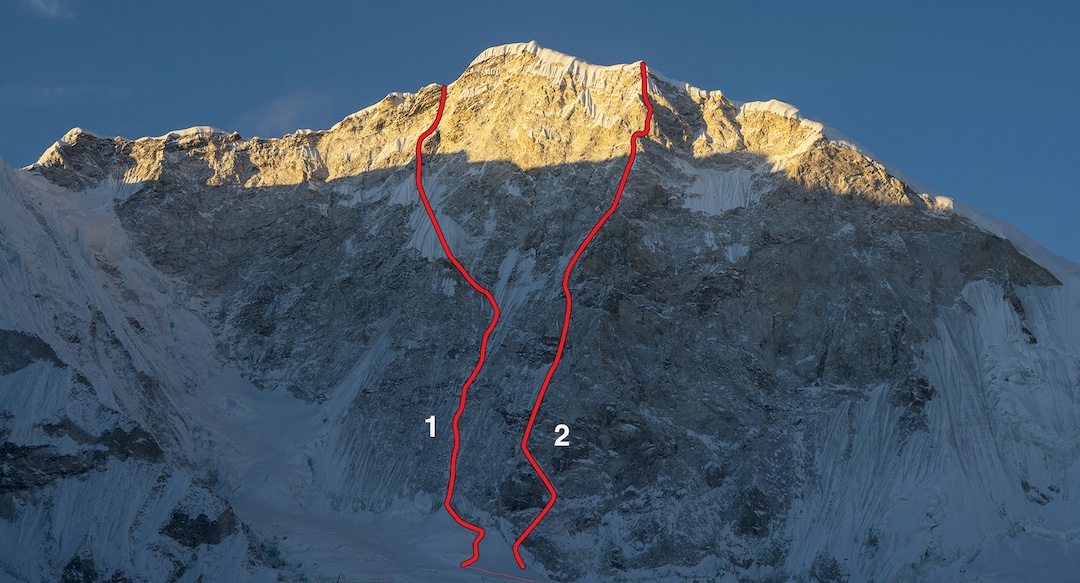 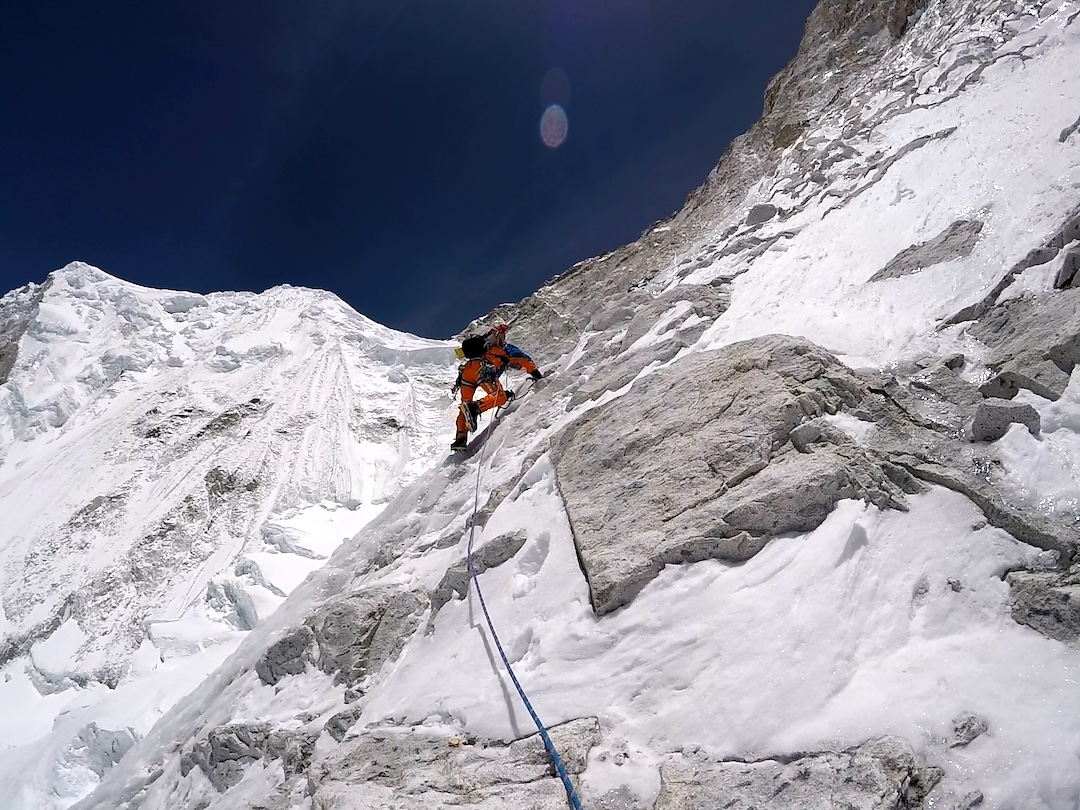 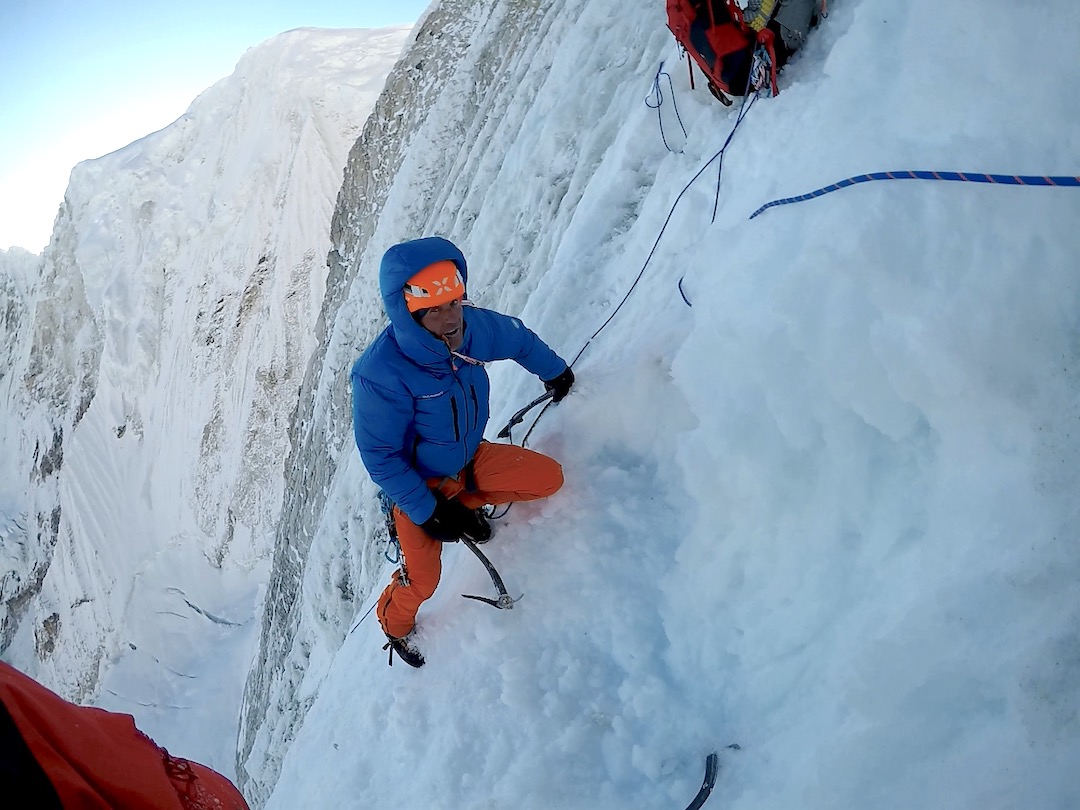 Chopping a bivy ledge on the west face of Baruntse.
Radek Groh 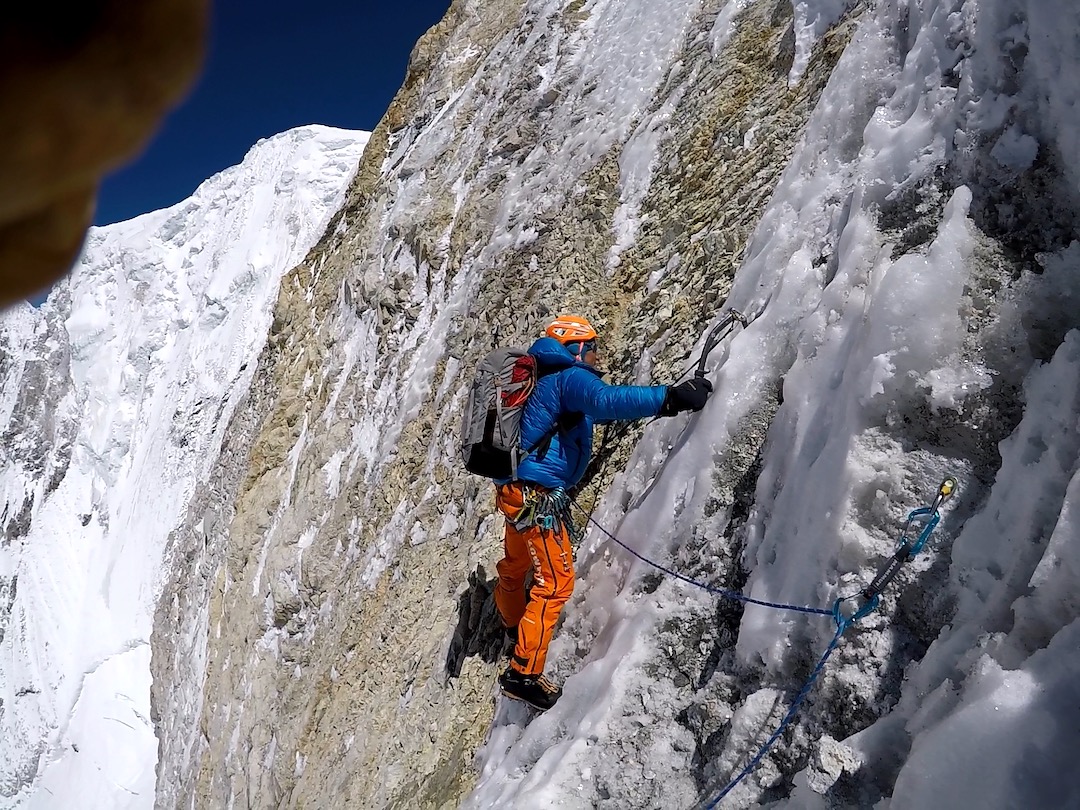 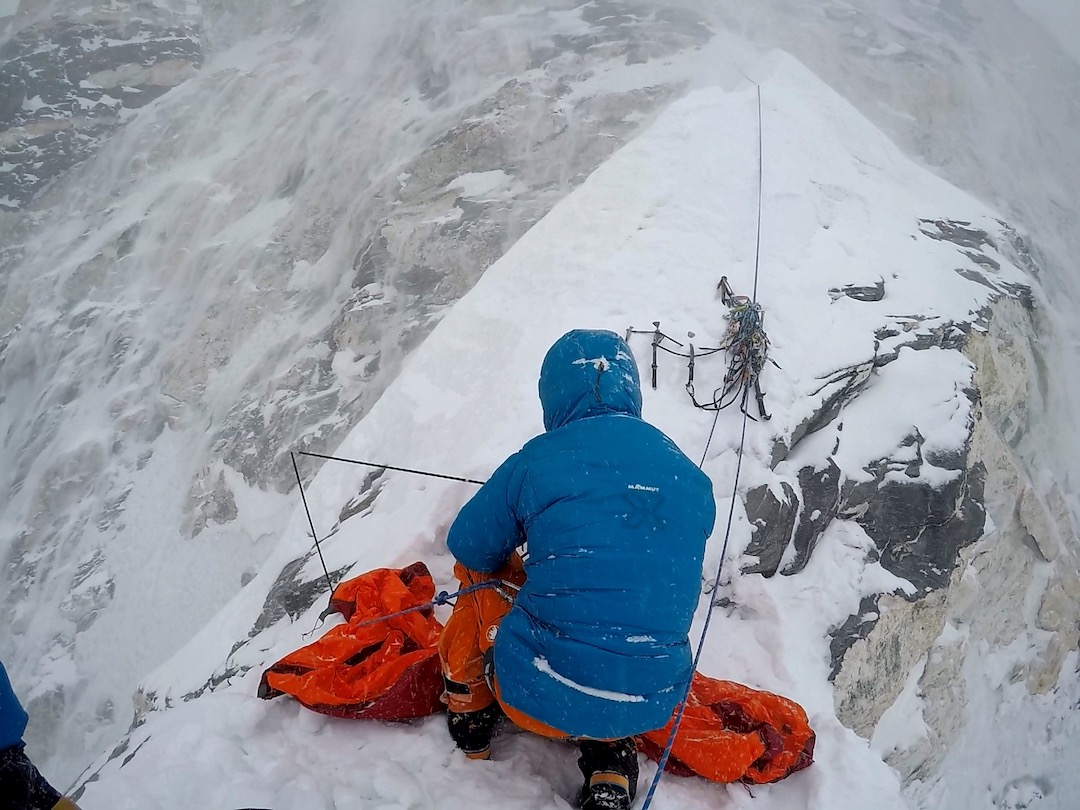 Torrents of spindrift pass by the final bivy site on the face (6,900m).
Radek Groh 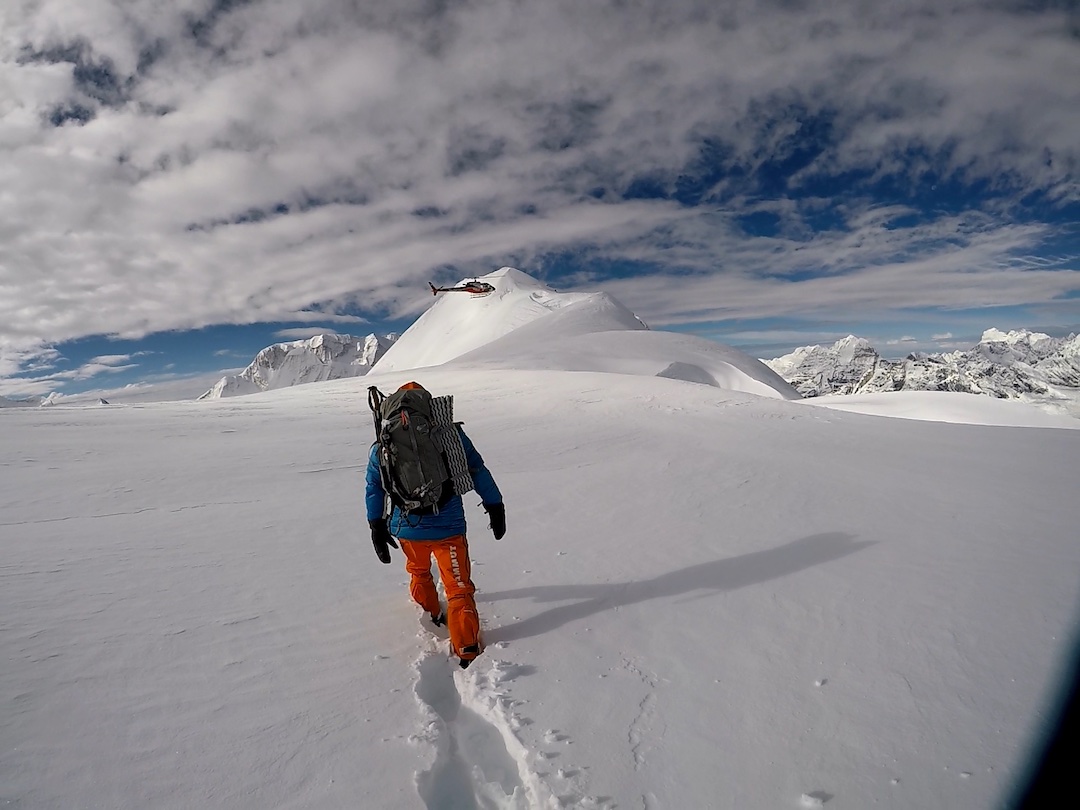 Moving through fresh snow to reach a helicopter the climbers called to pick them up at the end of their descent after 10 days on the mountain.
Radek Groh
Previous Next

Chopping a bivy ledge on the west face of Baruntse.
Radek Groh

Torrents of spindrift pass by the final bivy site on the face (6,900m).
Radek Groh

Moving through fresh snow to reach a helicopter the climbers called to pick them up at the end of their descent after 10 days on the mountain.
Radek Groh
Previous Next