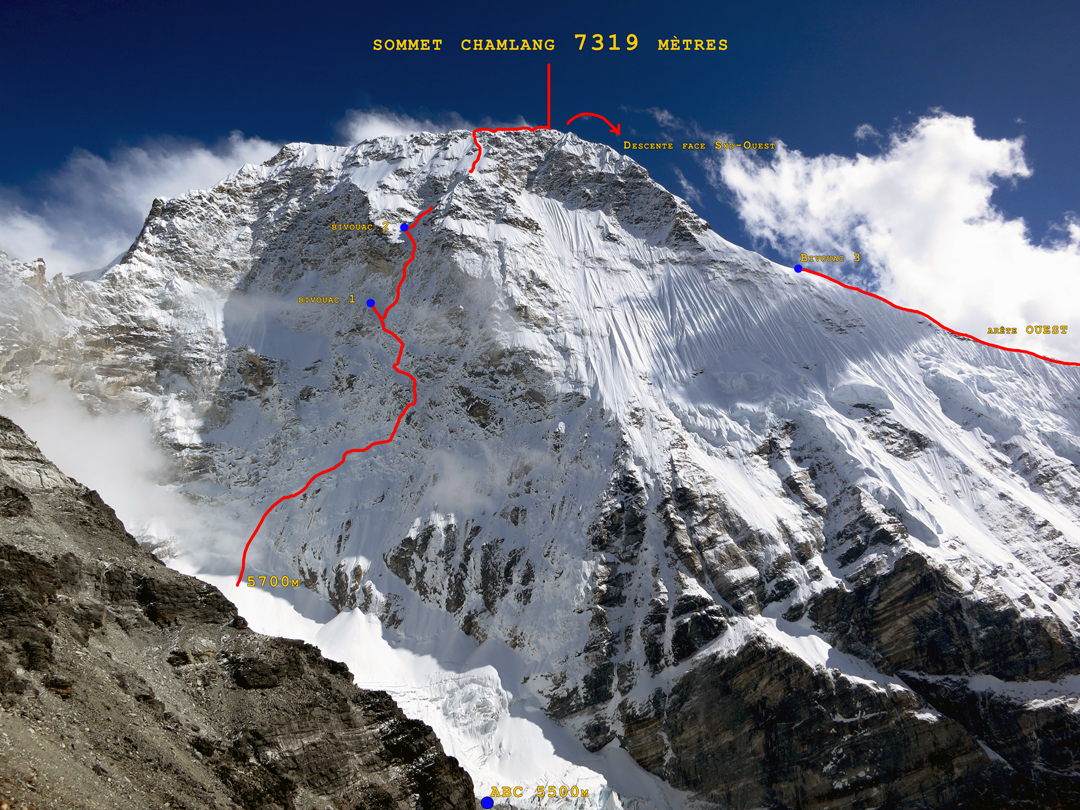 On October 4, six French alpinists—Charles Dubouloz, Damien and Fanny Tomasi, Aurélien Vaissière, Benjamin Védrines and Symon Welfringer—arrived at a 4,970m base camp in the Hongu Valley, below the north face of Chamlang (7,319m). In 2019, Védrines had attempted the unclimbed north pillar and then climbed the northeast couloir to a 7,240m foresummit on the east ridge of Chamlang (AAJ 2020). He was now back with Dubouloz for the main event: a new direct route up the north face. The other four climbers would attempt the north pillar.

Dubouloz and Védrines spent October 1–3 climbing and sleeping on Mera Peak (6,470m). From then until the 9th, when they slept at a previously placed camp below the face at 5,450m, they either rested at base or cached gear at this higher camp, on one day climbing over the bergschrund to check snow conditions on the north face and leaving a rope fixed (a good precaution, as it happened, because by the time they made their attempt, the slot had opened considerably).

Leaving on the morning of the 10th, the pair simul-climbed the first 300m of the face (55–65° snow) and then pitched more difficult ground between 6,000m and 6,400m, finding the climbing much steeper than they had envisaged. They bivouacked to the left of what would prove to be the crux section and spent a fairly miserable night due to heavy spindrift.

Next morning, they made a rappel to reach the start of the 200m crux section and climbed through it over thinly iced terrain (WI5+ M5+), bivouacking just above at 6,700m. According to Védrines, this was the worst night of his life, as spindrift constantly tried to collapse the tent and came through the walls and into his sleeping bag. The pair had very little sleep. They experienced no wind while climbing the lower and middle sections, but in the upper part had mostly continuous 30–40km/h westerlies, which funnelled spindrift down the north face.

On the 12th they found the upper slopes less sustained (45–50°) and in good condition. At first, they pitched but then climbed unroped, stopping only to belay two mixed pitches of M4 and M5. After eventually joining the last section of the 2019 Hák-Holoček route, UFO, on the northwest face, they arrived on Chamlang’s summit at 3 p.m. in strong wind.

Moving fast, the pair traversed over the top and descended to a bivouac at 6,600m on the west ridge by 4:30 p.m. The following day they climbed unroped down the west ridge, finding it sharp in sections (“a little like Lyskamm in the Valais Alps, only steeper”). The pair arrived back at base camp around 1:30 p.m. They named the route A l’Ombre du Mensonge (“In the Shadow of Lies,” ca 1,600m, ED WI5+ M5+ 90°, with around 10 sustained pitches of this technical grade in the crux section).

Meanwhile, the other four French had reached a 6,100m camp on the plateau below the north pillar, but had found too much snow for a safe attempt. Instead, they chose to try Hongku Chuli’s southwest ridge. On the morning of the attempt, while packing up without wearing gloves, Welfringer badly injured his thumb when a tent pole snapped. After some debate, the four descended to base camp.

On the 15th, with everyone resting in base camp, and knowing that heavy snowfall was on its way, Védrines decided to solo the southwest ridge of Hongku Chuli (6,833m). This mountain is officially unclimbed but may have been ascended from the north in 1952 by the Evans-Hillary-Shipton expe- dition (the 1954 Hillary expedition climbed Hongku Chuli West from the north), and since then by unauthorized parties. The southwest ridge, however, was more than likely unclimbed, although it had been attempted in Novem- ber 2019 by the German guide Luis Stitzinger and his client, Manuel Moeller, who turned back 300m below the summit.

Védrines was able to use his fellow team members’ tracks on the 300m west-northwest face of the 6,070m col that gives access to the plateau below Chamlang’s northeast side as well as the start of Hongku Chuli’s ridge. Above the col, Védrines found mixed ground on the ridge and then a prominent rock section (III). Beyond another col was a beautiful sharp snow arête with a few mixed steps, which led to a 300m-long plateau. Above this were sections of 40° before he reached the summit.

Lacking energy, Védrines began to doubt he could descend the way he had come, and he tried to inspect the west- northwest ridge. As he couldn’t see the lower section of this ridge, he returned by his ascent route, and fortunately felt stronger as he lost height and the downclimb proved less difficult than anticipated. The team left base camp on the 16th. 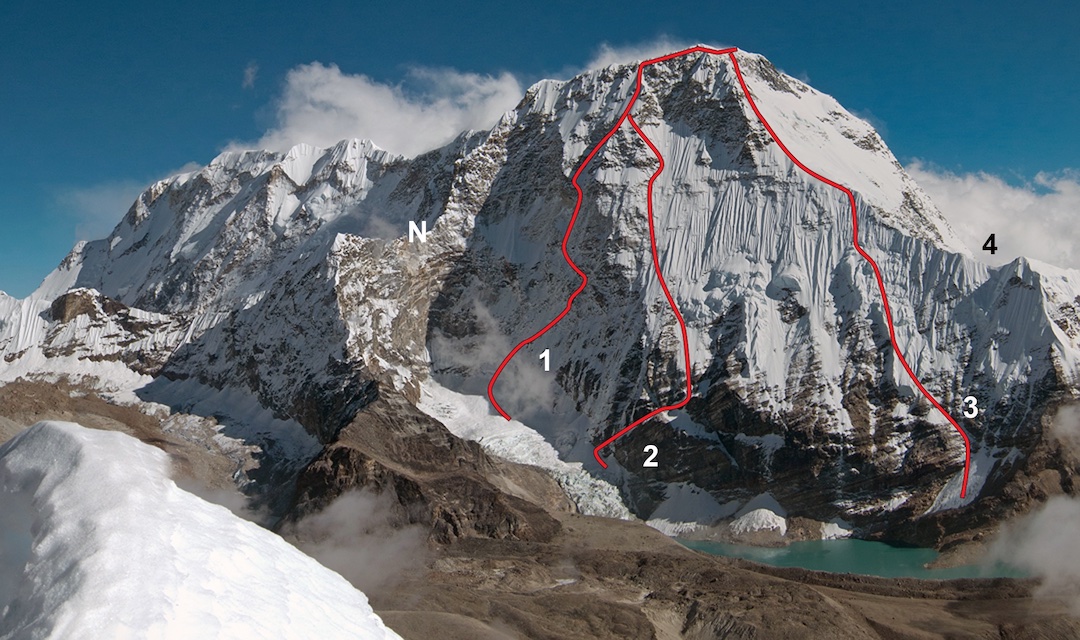 A l'Ombre du Mensonge on the north face of Chamlang, and the descent via the west ridge.
Benjamin Védrines 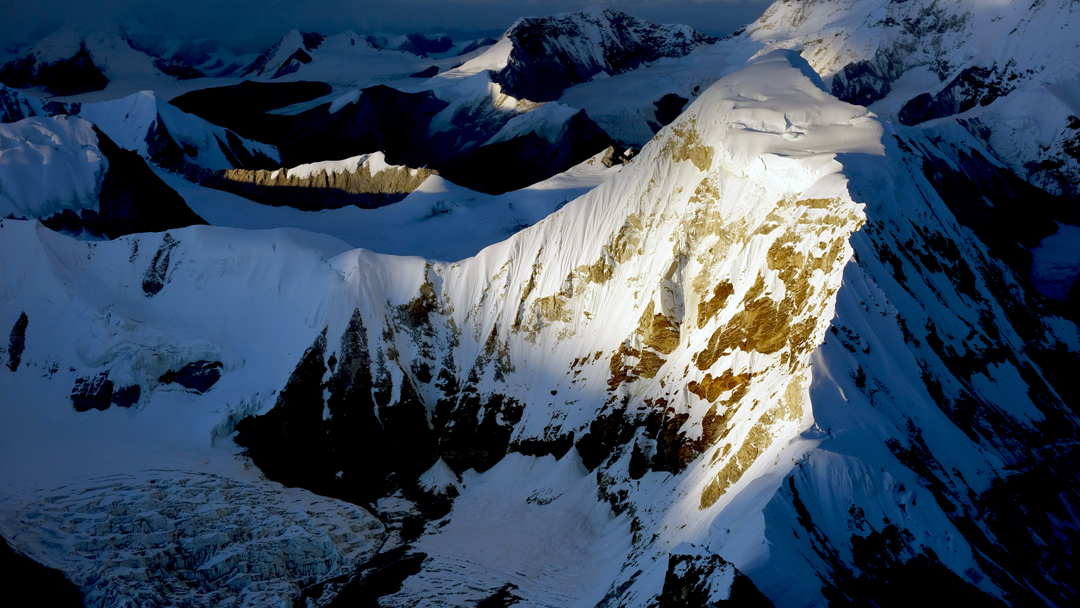 Seen from high on Chamlang, the southwest ridge of Hongku Chuli points toward the camera.
Benjamin Védrines 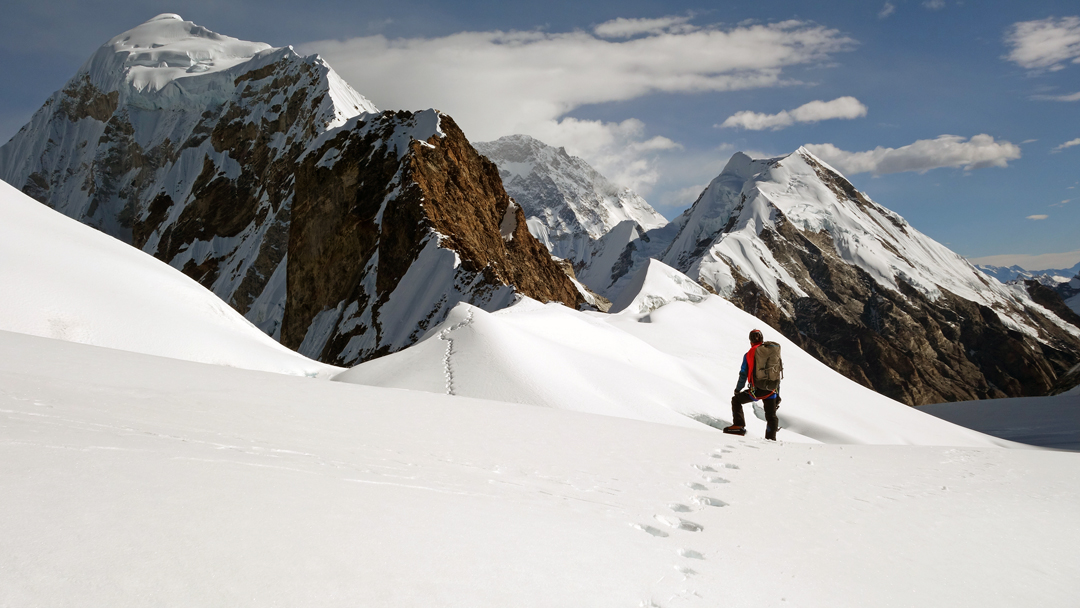 Tracks lead to Col 6,070m and the start of the southwest ridge of Hongku Chuli, which slants up left to the summit.
Benjamin Védrines
Previous Next

A l'Ombre du Mensonge on the north face of Chamlang, and the descent via the west ridge.
Benjamin Védrines

Seen from high on Chamlang, the southwest ridge of Hongku Chuli points toward the camera.
Benjamin Védrines

Tracks lead to Col 6,070m and the start of the southwest ridge of Hongku Chuli, which slants up left to the summit.
Benjamin Védrines
Previous Next