Kelley climbed toward the right side of the 1,200m south face, which comprised mixed rock, ice, and snow, to reach a subsidiary summit of 6,050m on the southeast ridge. He bivouacked once on the face at around 5,300m. From the subsummit, he followed the ridge to a col (ca 6,000m) before the main summit and made his second bivouac. On the 23rd he reached the summit after a long day and returned to his bivouac at night. On the 24th he was back in base camp. Difficulties are reported to have been sustained at M4 WI3.

In 1974 a British team, having seen photographs taken by the 1970 British expedition to Nampa, planned to attempt a beautiful peak on the ridge to the south of Nampa. At that time the only peaks on the permitted list were Api and Nampa, so they applied for, and received, a permit for "Nampa South." Approaching via the difficult Salimor Khola to the east (the first mountaineering team to do so), the team moved west into an unnamed valley, found their peak, and climbed the south ridge to a point 400m below—but some distance from—the summit. They were told locally that the peak was named Rokapi, but many years later it became apparent they had reached 6,400m on Jethi Bahurani (6,850m). This high peak was eventually climbed in spring of 1978 by Japanese, who also operated under the guise of "Nampa South." They were not so lucky with the authorities—the leader was banned from Nepal for five years once the true summit was known.

In 1977, another British team planned to attempt the 1974 expedition's Nampa South, but this time from the opposite side. They ended up climbing what is now known as Rokapi. This team approached from the Rokapi Khola to the northwest, establishing a base camp toward the end of September at 3,800m. Despite being slightly epic in character, the ascent of the mountain—a 13-day alpine-style traverse—remains an impressive and little-known achievement for the era.

With only the leader, Dick Godfrey, and Nepali staff left in base camp, Tom Herley and Kevin McLane climbed the west-southwest ridge, over a foresummit they named the Merangue, to the main top. Then, returning to the col before the Merangue, they cut back north and descended the northwest face. At one point on the ascent they were avalanched about 150m, while on the descent both fell between 12m and 25m over an ice cliff. They had no food for the last four days, and on the last two suffered many hallucinations. Godfrey and the liaison officer, having given the two up for dead, were just on the point of leaving when Herley and McLane staggered into base camp. 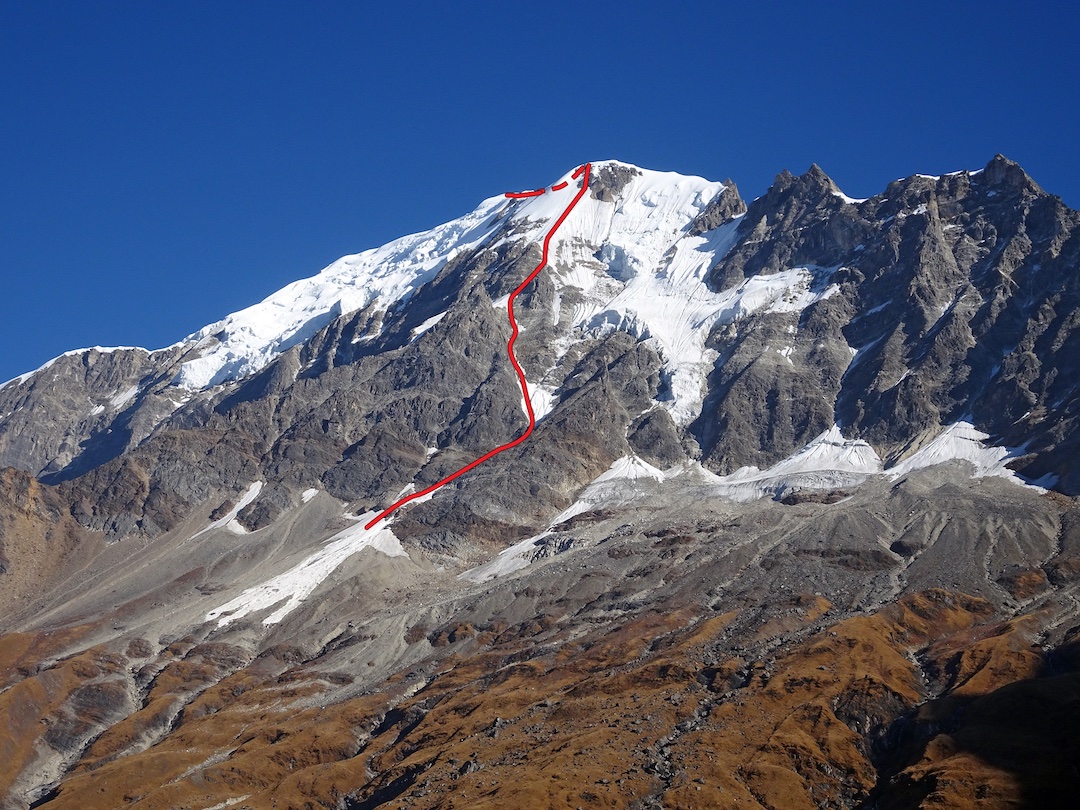 The 1,200-meter south face of Rokapi (Kap Chuli) and the 2021 solo route. The ascent was the second overall and first winter ascent of the 6,468-meter peak.
Roger Nix
Previous Next

The 1,200-meter south face of Rokapi (Kap Chuli) and the 2021 solo route. The ascent was the second overall and first winter ascent of the 6,468-meter peak.
Roger Nix
Previous Next