One-day solo ascent of the north face in winter 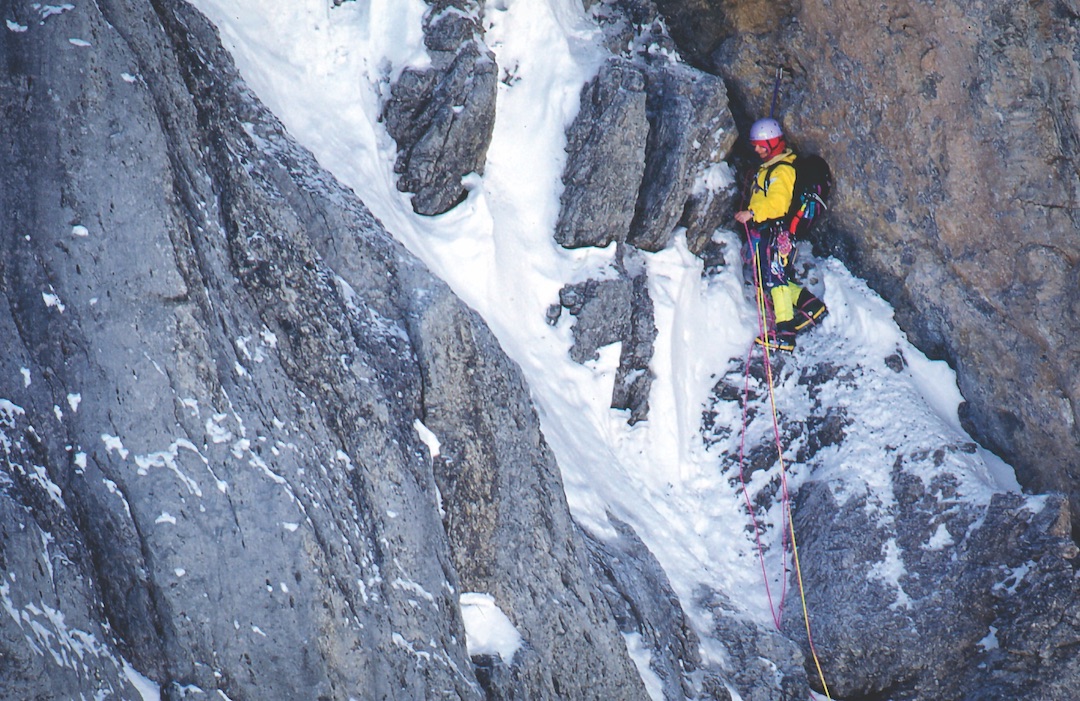 Making full use of the remaining daylight, I traversed 40 meters to the left to a small snow-covered platform below the Exit Cracks. I looked up and was staggered to see not a cascade of ice but a large, completely vertical groove of polished rock that had a light dusting of snow. The discovery almost floored me—this was going to be far from easy. It was already 6 p.m., the night was drawing in. The idea of bivouacking crossed my mind but was instantly rejected, as I judged there was still just enough light to climb the first ten meters of the groove, which looked to be the very steepest part. I wasted no time, put my headlamp on over my helmet, and started up the giant groove.

I climbed without hesitation, spreading arms and legs to push on each side of the dihedral. I was afraid of the abyss below, but concentrating so hard that I managed to shut it out of my thoughts. As I had anticipated, after 15 meters, the gradient reduced a bit and there were better holds. However, the darkness bothered me to the extent that I found myself gripping the holds twice as hard as normal. At last I reached a small snowy ledge. There was no longer any need to hurry, as it was now dark. I would get there when I got there. So, before starting the rest of the climb, I had a drink and ate a few energy bars while trying to see what was above by sweeping the beam of my headlamp across the face.

I thought again of bivouacking, but it was risky. If I waited for daylight sitting upright or stand- ing, dehydrated as I was, my fingers and toes risked freezing or, come the morning, I would be too dazed and sluggish with cold to leave. It was better to move on, even if it meant climbing all night. Already getting cold, I left immediately. The route was not complicated—straight on up to the top. I left no room for uncertainty, systematically checking each handhold and foothold. Each move was made with the utmost concentration.

Some meters higher, I realized I was starting to lose feeling in my fingertips, and I made myself stop, even though I did not want to interrupt my steady progress. I put on my gloves, got some feeling back into my fingers, and then conscientiously went on with the ascent. It was hard work constantly checking all my holds, and my fingers began going numb again. Once again, I needed a stop to warm up my extremities and give my mind a bit of a break.

It took a ridiculous length of time to climb just 50 meters. I could feel exhaustion setting in. After each meter I stopped, tried to relax a little, and then went on. The temptation to throw caution to the winds and power on up to the summit was great. It was a permanent struggle with myself; I needed to be sensible.

Finally I reached the ice slope. Perked up by the proximity of the summit and armed with my ice axes, I attacked the last steep section with greater cheer. Unfortunately, 20 meters higher, it was all too much and I had to stop: I needed to catch my breath. After 30 seconds, I was off again. A few moves higher, another stop. Looking up obstinately in an attempt to glimpse the summit, all I could make out was blackness.

At that point I realized I would need to concentrate on my movements again, not on reaching the summit. Climbing slowly, I would be bound to get there sooner or later. With greater determination and with my eyes fixed no more than a meter away, I set off again.

Lost in thought, I suddenly noticed I was practically crawling on a slope so gentle that I normally would walk up it. Footprints appeared in the circle of light just under my nose. I was on the summit ridge.

Catherine Destivelle on the north face of the Eiger in March 1992, photographed from a helicopter.
René Robert
Previous Next

Catherine Destivelle on the north face of the Eiger in March 1992, photographed from a helicopter.
René Robert
Previous Next