A 2001 route ascended the left side of this aspect Siulá Grande, directly under the summit, but only reached the ridge at 6,250m (see “Southern Discomfort,” AAJ 2002). The entire southeast pillar and ridge on the right side of the face was climbed more recently, in 2016 (see “Le Bruit des Glaçons,” AAJ 2017). I studied Google Earth imagery of the ramp between these two lines: It seemed like one of the cleanest routes on the mountain, with minimal exposure to objective dangers—if you could get through the icefall. I tucked the idea away to ripen until called to it.

On July 22, 2017, my friends Aaron and Jeanne Zimmerman summited Siulá Grande by the Catalan route on the east face, where they recorded summit elevations of 6,368m on the southern top and 6,366m on the northern (the summits are about 150m apart). I felt called to attempt the Catalan route one year later. We were not so lucky with the weather.

In May 2019, one of our team members from that climb, Benjamin Billet (France), was able to take some key photos of the south face while acclimatizing on the Huayhuash trek. These images revealed that the ramp on the south face gained the upper southeast ridge without any overhanging cornices. Thus, we decided to try this route. Arttu Pylkkanen (Finland), Billet, and I would form one rope team, while Luis Crispin and Thomas Schilter (both from Peru) would form the other. 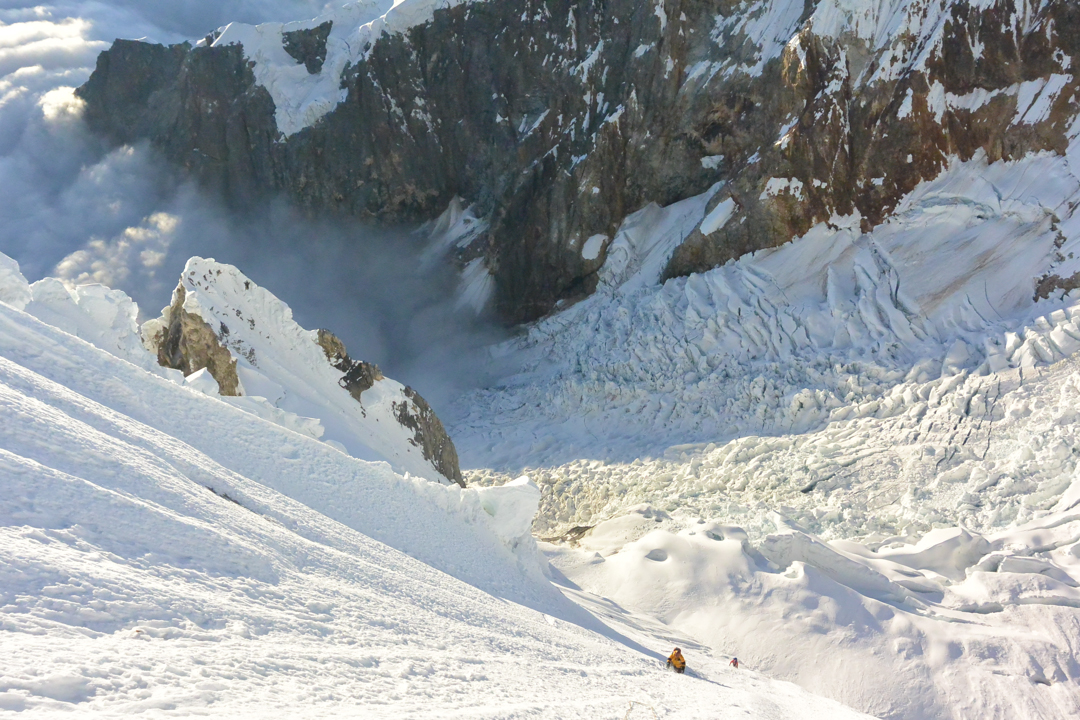 On June 22, we traveled to Queropalca on the east side of the range, where we met our arriero, Cesar, at his house in the pastures below Carhuacocha. On the 23rd we hiked with the donkeys to the lagoons at the foot of Yerupaja and Siulá Grande. We had hoped to camp at the last lagoon, Quesillococha, but the locals forbade it, so we continued 2km further. We left some equipment by the glacier that afternoon.

On the 24th, we dove into the labryinth of seracs that tumble down from the basin above. We hoped to make it through in one day, but at 4 p.m. we decided to camp under a huge wave of ice that protected us from falling debris. Early the next day, we reached a camp at 5,400m on the glacial plateau. The only true obstacle we encountered was a wide crevasse at the base of the north face of Carnicero, though the whole area is exposed to rockfall.

At midnight on the 26th, we started our climb. Once on the ramp proper, we climbed straightforward 60–70° snow and ice for 800m to reach the southeast ridge at 6,200m by late morning. Clouds blanketed the east, while the Cordillera Raura provided an unreal backdrop to Carnicero’s unclimbed north face. A large, hidden crevasse cut through the east face, denying us an easy ridge traverse. Past this, one last technical obstacle remained, where the shoulder steepens for 100m (WI3) to gain the snowy summit ridge. A 10-minute traverse of the broad upper ridge brought us to the summit at 4:30 p.m., where our GPS showed a height of 6,380m. We stayed for a half hour in the fading light and enjoyed our moment on top of this elusive summit.

We used a snow stake as a dead-man anchor to descend the upper ridge and reached the top of the ramp again as darkness set in. Halfway through our 17 rappels, I became very dehydrated and started to throw up bile. Eating snow provided much-needed liquid relief for my parched throat. When we finally got to the bergschrund, I hammered in our best snow stake to descend the 10m overhang to the glacier below. We reached our high camp again at 3:30 a.m., 27 hours after leaving. 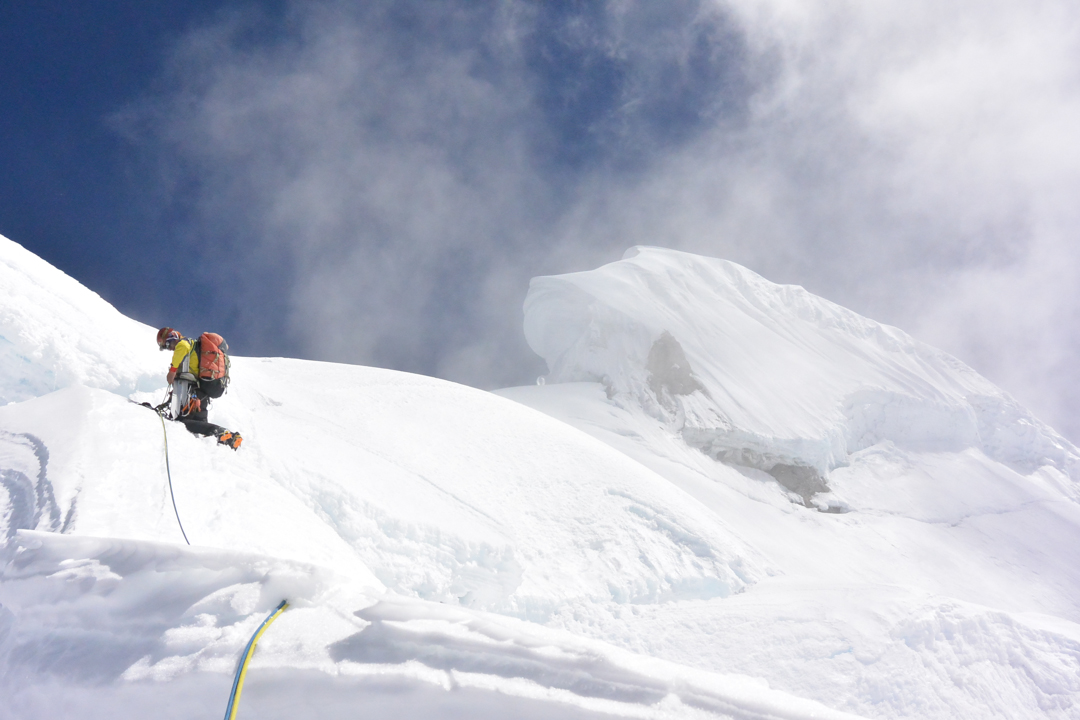 Everyone was on high alert while descending the spider web of snow bridges through the icefall the following morning, this time with more rockfall. We reached our base camp at 7:30 p.m. on the 28th. Cesar arrived the next morning, cracking his whip over the donkeys. The weather had changed for the worst, as it normally does when a principal Apu has been climbed.

We called our route Peruana Supreme (1,000m, TD AI4). This ascent was special for all of us, but especially for Luis and Thomas (16 years old), both from Cusco, who became the first Peruvians to summit this famous mountain. I met Luis in 2011 on my way back to Cusco after a climb; he lives in a village at 4,300m below Ausangate and began assisting his uncle with tourist treks when he was 12 years old. He worked with me as I established my guiding agency, and since then we have done many climbs together. From my observations, Luis did not start climbing for any other reason than curiosity and camaraderie. He loves the natural world and has vast knowledge of it, and, at first, I think he just wanted to know what it would be like up there in the snow and ice. Luis and Thomas roped up together on Siulá Grande so no one could suggest they hadn’t made a purely Peruvian ascent of the peak.

For me, this was the eighth summit and last difficult peak on my personal quest to climb the 10 highest mountain massifs in Peru.

Luis Crispin and Thomas Schilter leading up the 800m ramp of 60–70° snow and ice on the direct south face of Siulá Grande.
Nate Heald

Luis Crispin on the upper shoulder of the southeast ridge of Siulá Grande.
Nate Heald 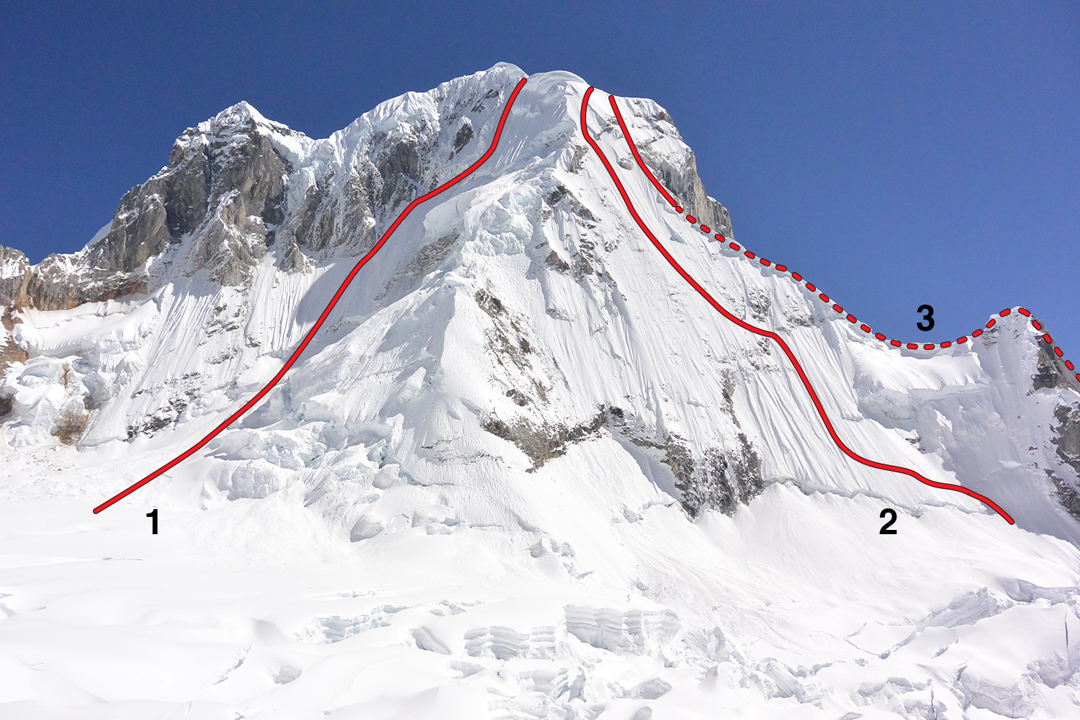 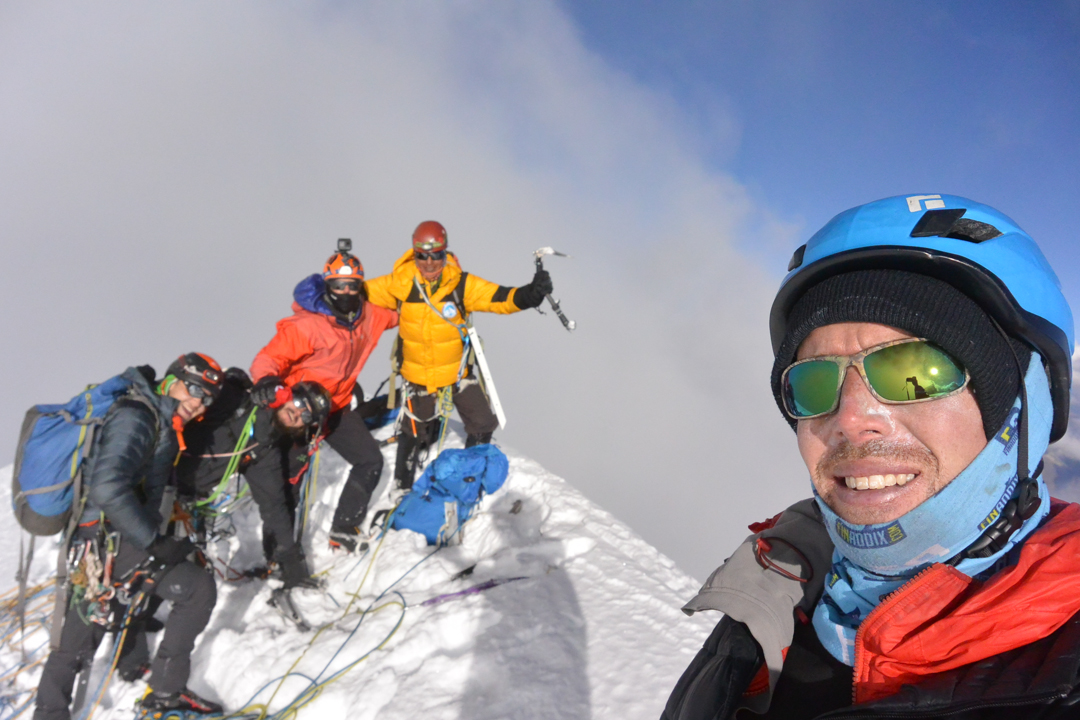 The team on the summit of Siulá Grande.
Nate Heald
Previous Next

Luis Crispin and Thomas Schilter leading up the 800m ramp of 60–70° snow and ice on the direct south face of Siulá Grande.
Nate Heald

Luis Crispin on the upper shoulder of the southeast ridge of Siulá Grande.
Nate Heald

The team on the summit of Siulá Grande.
Nate Heald
Previous Next