The Shining Wall of Gasherbrum IV 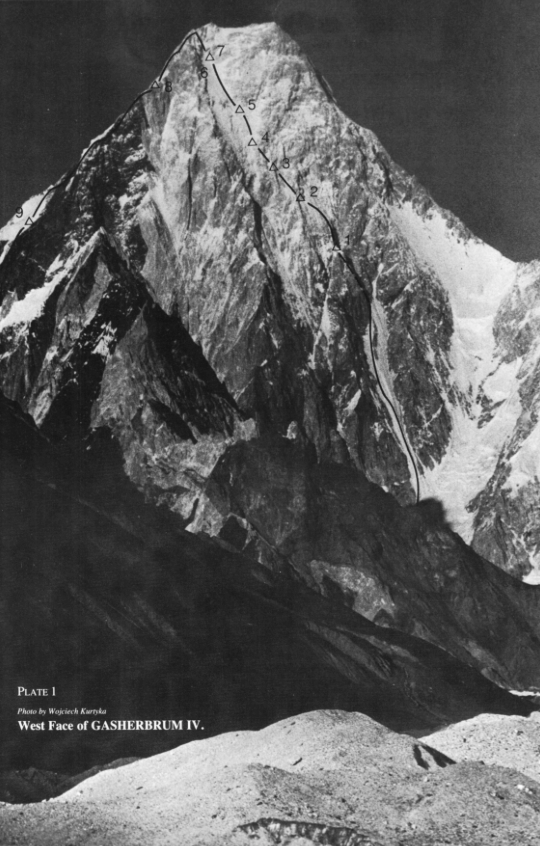 FROM JULY 13 to 20, Austrian Robert Schauer and I from Poland climbed the virgin west face of Gasherbrum IV to the top of the wall, though we did not get to the very summit. The descent was completed from July 20 to 23 via the north ridge. The 2,500-meter-high face has been called the “Shining Wall” and has gained the reputation of being one of the most beautiful and challenging mountain faces in the world. It had already been attempted five times by strong American, Japanese and British teams.

We did the ascent in the purest alpine-style after an acclimatization climb to 7100 meters on the north ridge, where we left a food cache. Dramatic circumstances in the last stages of the ascent, after we had completed climbing the face proper, prevented our reaching the exact summit. Appalling weather and conditions on the face delayed us and dangerously prolonged the ascent, making us suffer from hunger and thirst. On July 20, after emerging exhausted from the wall onto the summit ridge, we abandoned the apparently easy horizontal traverse to the summit and immediately started the abseils down the north ridge.

The mountain seemed to be ruled by an unfriendly spirit which opposed the germ of every effort and even of every intention. Surprisingly, it ceased to harass our faltering minds when we abandoned the last meters to the summit. However, we got off the face alive; the climb was perfect and very instructive of all possible traps and hazards of alpine-style climbing in the high mountains. A few striking examples follow.

#. Just below the summit on July 18, the sixth climbing day, at 7800 meters, when we had run out of food and fuel, we were trapped by a horrifying tempest. Protected only by a modest bivouac sack, we spent two hard nights on a tiny snow ledge, swept by avalanches and raked by the hurricane. Masses of snow constantly buried, squeezed and suffocated us. The whirling, blinding wind so oppressed us that we could fend off the snow only by crawling on all fours.

Thank you, angry sky, you cleared on the second night!

#. The bivouacs were miserable. The second and third nights, we sat almost sleepless and separated from each other, very uncomfortably, on spiky, rocky pinnacles. The sleeping bags were the only shelter from the cold sky.

Thank you, Karakoram, you were windless those nights!

#. All the following nights were troubled by furious winds and impetuous spindrift. Again we had little sleep in the bivouac sack, buried on ledges hacked into the ice.

#. The conditions on the face proved very difficult and dangerous. The rock was either completely rotten or of completely compact marble, which offered poor protection. Due to the total lack of belays, it was the common practice to extend the pitches from 40 to 80 meters—though some were of sustained Grade V difficulty. Altogether, we climbed four pitches of Grade V—two of them at 7100 and 7300 meters in technically very hard extremely compact marble without a single belay point. The real nuisance was the very deep snow on the mixed ground through which we tunneled vertically, demanding tortuous work.

How beautiful, the horrifying long rope, swinging away free!

#. The conditions caused slower progress than expected. We carried food for four bivouacs and fuel and drink for five days while the complete climb lasted eleven days. Finally we were saved by the food cache reached on the evening of the ninth day at 7100 meters, left during the acclimatization climb on the north ridge. We had endured four days without food and three without drinking.

Oh, how wet was the tea, how sweet were 30 candies!

#. The physical exhaustion, hunger, thirst and lack of sleep caused a number of astonishing psychic sensations. Particularly amazing was the phenomenon experienced by others at high altitudes, the feeling of the presence of the “man who isn’t there,” of the “third person.” It was so intense that at times both of us instinctively awaited the reactions and the participation of the “third person.”

Why, dear friend, did you not appear?

#. For long periods I heard strange sounds like music, the twittering of birds or whispered talk. Sometimes it was easy to discover them as transformed real sounds and to trace them to where they came from. For instance, the sound of beautiful and passionate women singing, something between Barbra Streisand and Santana, heard at five P.M. on the last days, came from the rubbing of the rope sliding over the rough snow surface punctuated by our steps.

I’d never guess that you would come out of the rough snow, Barbra Streisand!

#. Uncommonly intense and almost troublesome was the amazing inclination and ability to associate rocks, snow or clouds with human figures and shapes. These were transformed into very real images. They seemed shaped by some hidden, mysterious spirit.

Who made you, lovely and quiet figures?

#. Particularly painful, due to the severe lack of sleep, was repeatedly falling asleep suddenly and unchecked at the belay stances followed by an equally sudden awakening with a sense of terror.

#. Equally unpleasant were the tormenting visions of food and drink.

Oh, you rice, you bread!

Though it was the most beautiful and mysterious climb I have ever done, I feel miserable for having failed to reach the summit. I can’t resist the conviction that this Beautiful Mountain and its Shining Wall are too splendid and too perfect to consider any ascent of it without its most essential point—the summit—as really completed.

* “Shining Wall” is not a translation of Gasherbrum as has appeared several times in print. In Balti rgasha=beautiful; brum=mountain.—Editor.