At the end of May, the prolific Catalan climber Oriol Baró and partners arrived in Cusco without plans or a set goal in mind, but knowing they would be able to find a real adventure. Like Baró, his teammates Ferran Rodriguez and Guillem Sancho were fresh off a season of guiding at home in the Pyrenees. Through a mutual friend, Oriol contacted me, and we met for beers to discuss interesting objectives and logistics for them. [The author runs a Cusco-based guide service and has done many first ascents in the area.] We called my arriero friends in the different ranges, and the guys made their plans over a few rounds.

The first phase was to acclimatize in the sport climbing area of Chacco Huayllasca, located in Pitumarca at 4,000m, two hours southeast of Cusco. The local climbing community, led by Jorge Sirvas, has dedicated the last few years to develop this area, and it has become one of the best in Peru.

At the beginning of June, the guys drove to the village of Pacchanta, on the north side of the Cordillera Vilcanota. There they went to the house of Alejandro Crispin to get some horses for their gear; it would be three hours up to the Jampa pass at 4,900m to make their base camp.

Their first two new routes were on Concha de Caracol (5,640m) and the south peak (6,070m) of Jatunhuma (6,127m, a.k.a. Tres Picos), which anchors the center of the Cordillera Vilcanota. First, they climbed a direct line up the south face of Concha de Caracol, which they called Via Pirenaica (TD+). The descent went west to the col with Caracol (5,625m) and down the easier slopes up which past ascents of this peak were made.

After a day of rest and time to see other possibilities, they went for the unclimbed south face of the Nevado Jatunhuma on the lowest of its three summits. While this peak had seen a few ascents decades ago, it was traversed from the southeast ridge to reach the principal northern summit. Their line on this peak, Via Adrenaline (ED+ WI6 M6 R A2), is now the most technical in the entire range, with a pitch of WI6 and a run-out, mixed ice-roof crux with M6 and A2 climbing at 5,900m elevation. However, they were just getting started.

After some rest in Cusco, the team went to the end of the road at Soray Pampa (3,900m) below the south face of Nevado Salkantay (6,279m) to stay in the Refugios Salkantay lodge owned by a local friend, Edwin Espinoza. After a recon of the complex mountain, they horse-packed up to the Incachillaksa pass and made camp below the southeast ridge at 4,900m to rest for a day and study the face. After traversing over the ridge to the southeast face, they worked up a line between the Czech 1978 southeast face route and the New Zealand 1973 southeast buttress route. They descended the east ridge and returned to camp 25 hours after leaving. This is the first new line since 1986 on Salkantay, a mountain that has seen only a handful of ascents since then.

After Salkantay, Jordi Marmolejo (Catalan) arrived in Cusco to join the team, replacing Rodriguez. The next peak of interest was Nevado Terijuay (5,330m), in the Cordillera Urubamba, north of Cusco. They were able to rent my truck for the drive, since there is no regular public transportation to the village of Quelcanca.

On my own ascent of Terijuay in 2017, our team ran into the problem of machete-wielding locals trying to stop us from climbing the mountain. This year, the Spanish were unable to convince the new community president to allow them to go up to base camp with an arriero, so they got in the truck to look for something else. By chance, they ran into local climber Coqui Galvez, who told them of his ascent of the south peak of Chicon. They decided to climb a line just left (400m, TD). After this, Guillem Sancho departed Peru. Since they were close by, Baro and Marmolejo repeated the normal route (D) on Nevado Veronica (5,911m) in a couple of days at the end of June.

For Baró’s sixth climb of the trip, he and Marmolejo teamed up with local Jorge Sirvas (Peru). They set out from Sirvas’ home in Pitumarca, at the southern foot of the Cordillera Vilcanota, and in a quick sortie, they climbed the south face (400m, TD) of Surimani (5,420m) on July 2.

The last climb of this incredible trip was the grand finale. Nevado Sacsarayoc (5,918m) in the Cordillera Vilcabamba lies just south of Pumasillo (5,991m) on a knife-edged ridge and had only one previous ascent, by a 1962 New Zealand expedition (Alpine Journal 1964). The NZ team spent two months in the area, using the village of Yanama as a base of operations, and made several first ascents. They first tried to traverse Pumasillo south along the ridge to Sacsarayoc. Eventually, they circumnavigated the mountains to the east over the Lasunayoc col to reach a feasible line. After much effort, only Hermann Farrell reached the summit, following an open bivy a few hundred feet below the top.

For years, I had thought to try the second ascent of Nevado Sacsarayoc by the stunning south face, visible on the flight from Lima to Cusco. However, there are many other climbs waiting, so I shared this idea with Baró and Marmolejo. Two days later, they went to meet arriero Alejandro Huaman, in Yanama, which now has a decent dirt road. Alejandro took them up the grassy slopes to the south of the peak until the mule could not go further. A few hours later, they crossed an unsettled moraine to make camp on the last rock shelves before the glacier. On July 10 they climbed the south face and reached the summit at midmorning, after which they rappelled their route. They named the route after one of their favorite things in Peru between climbs: Pisco Sour (800m, TD+). 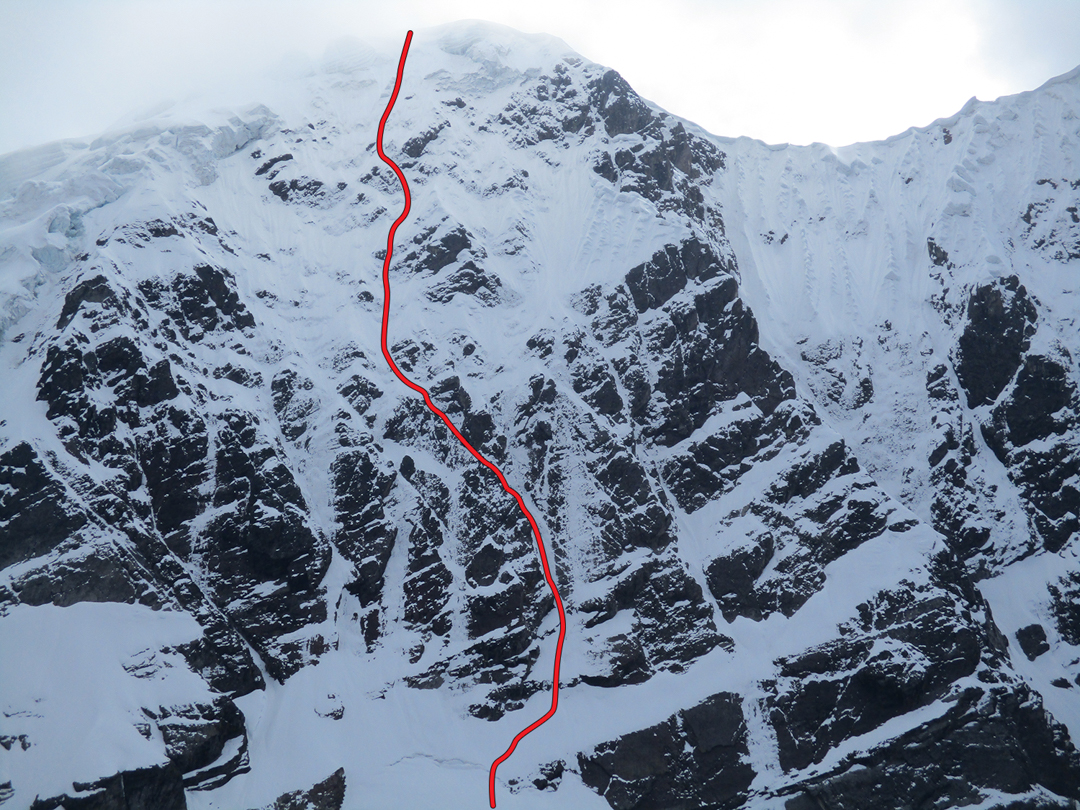 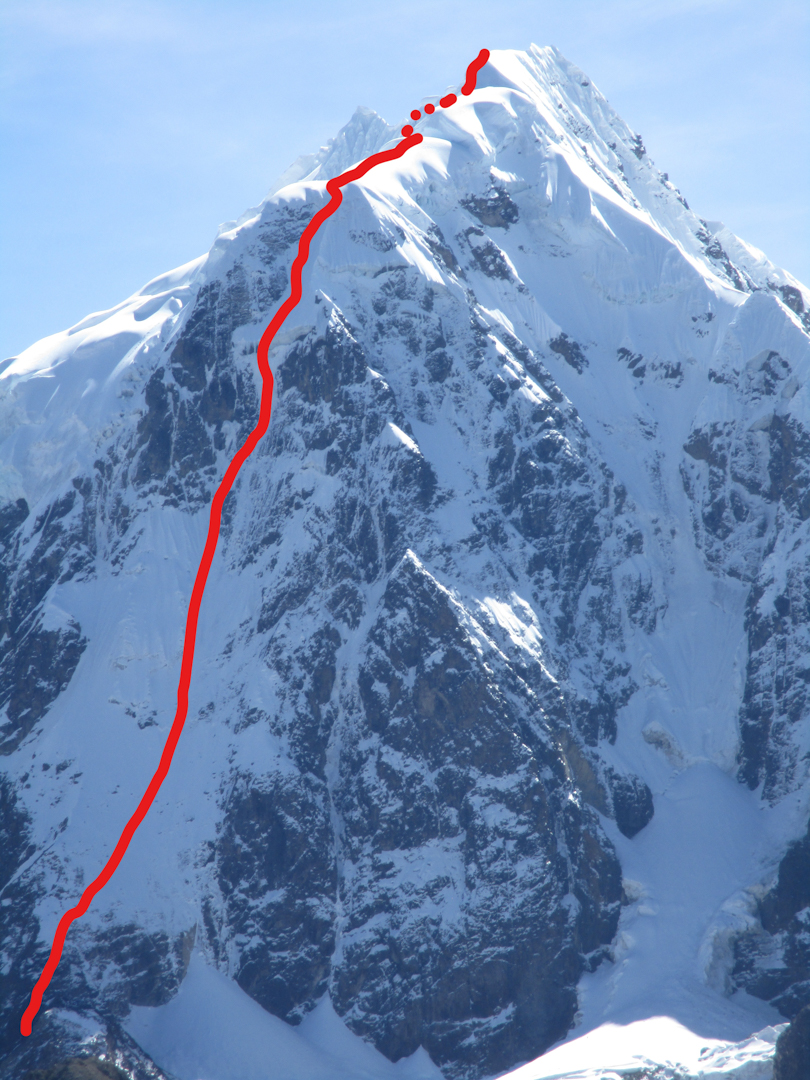 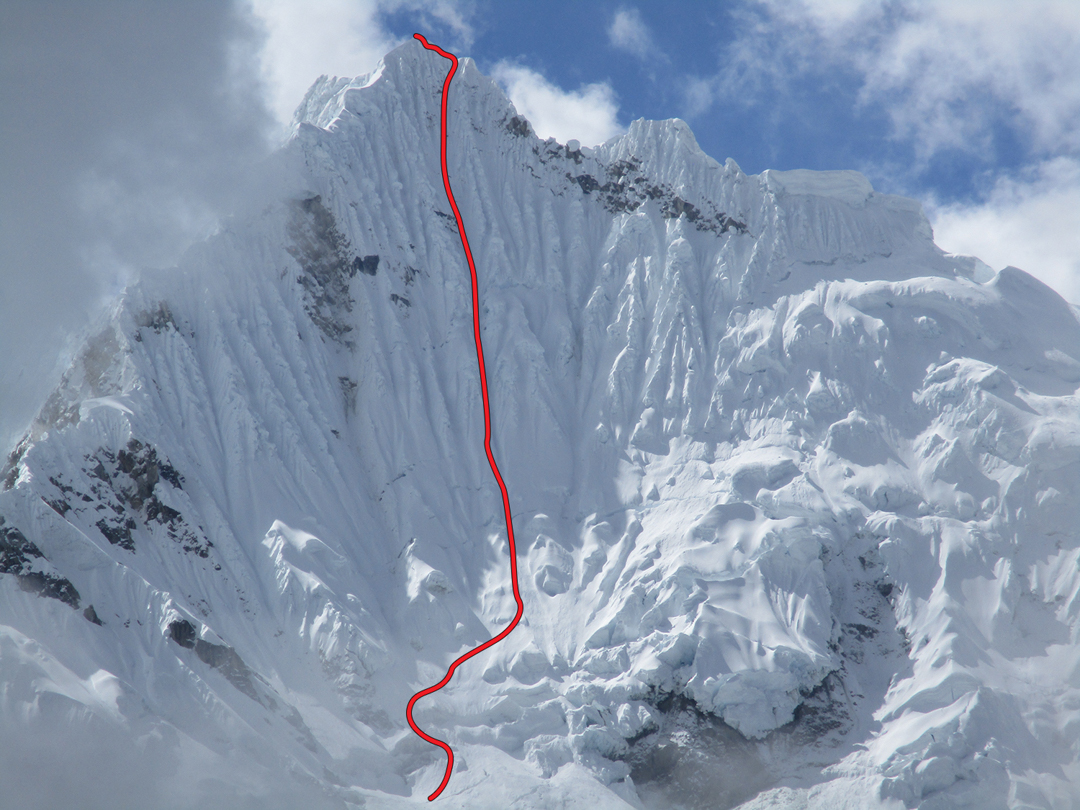 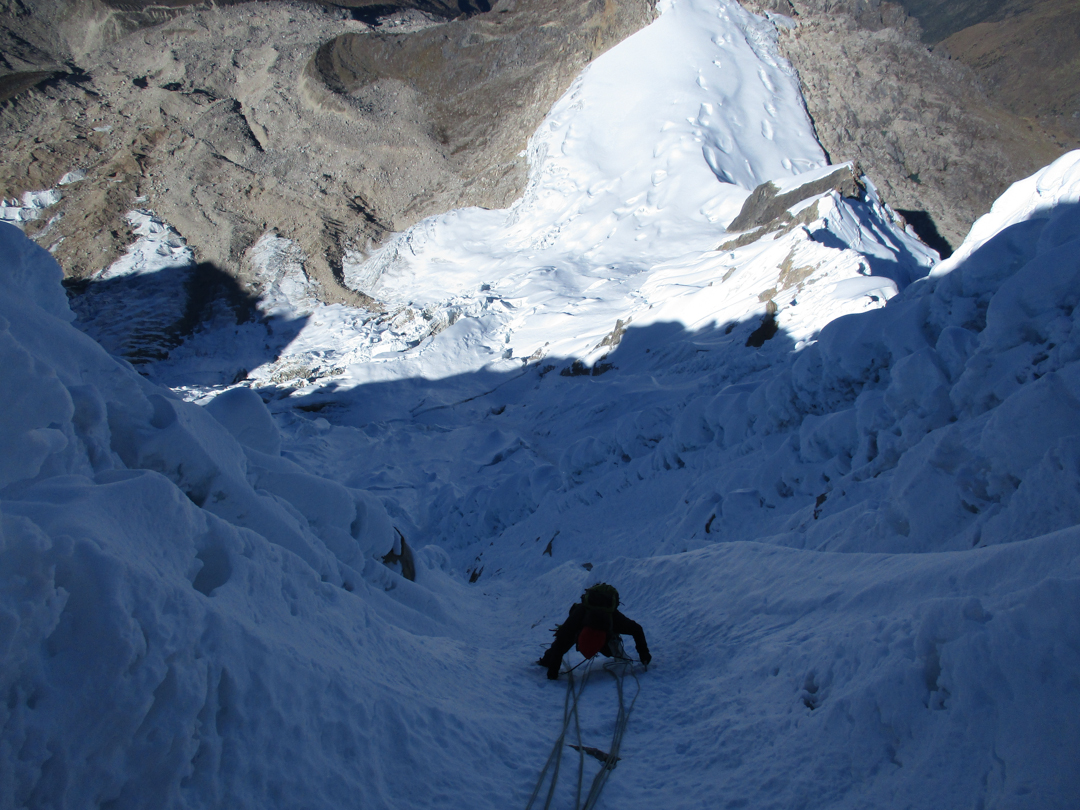 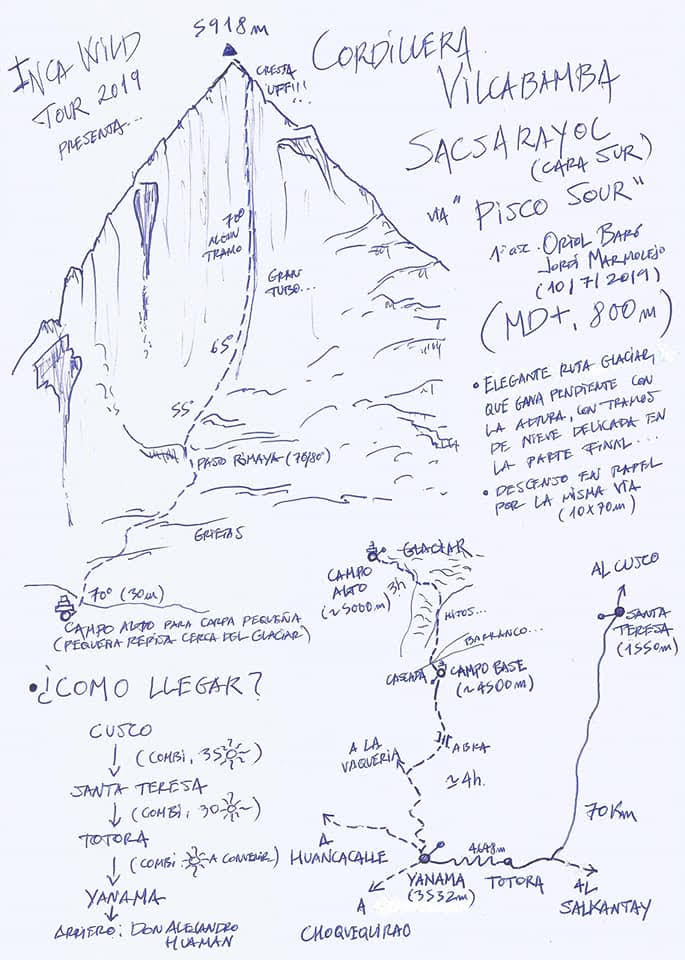 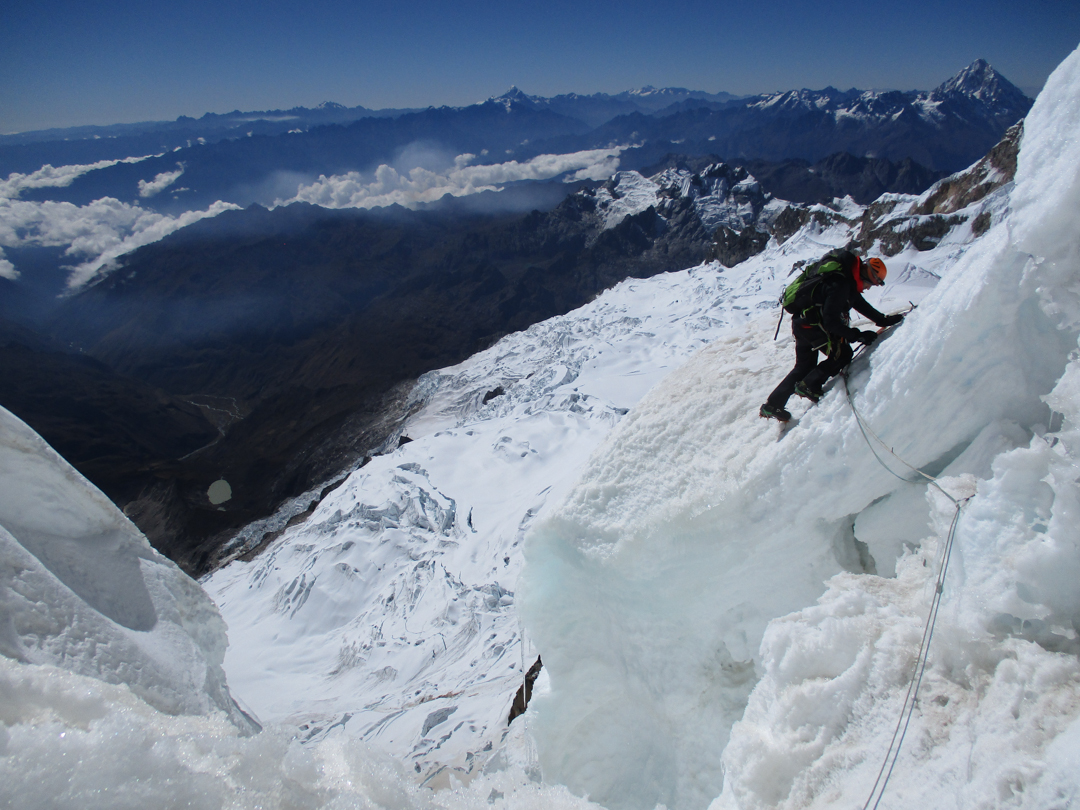 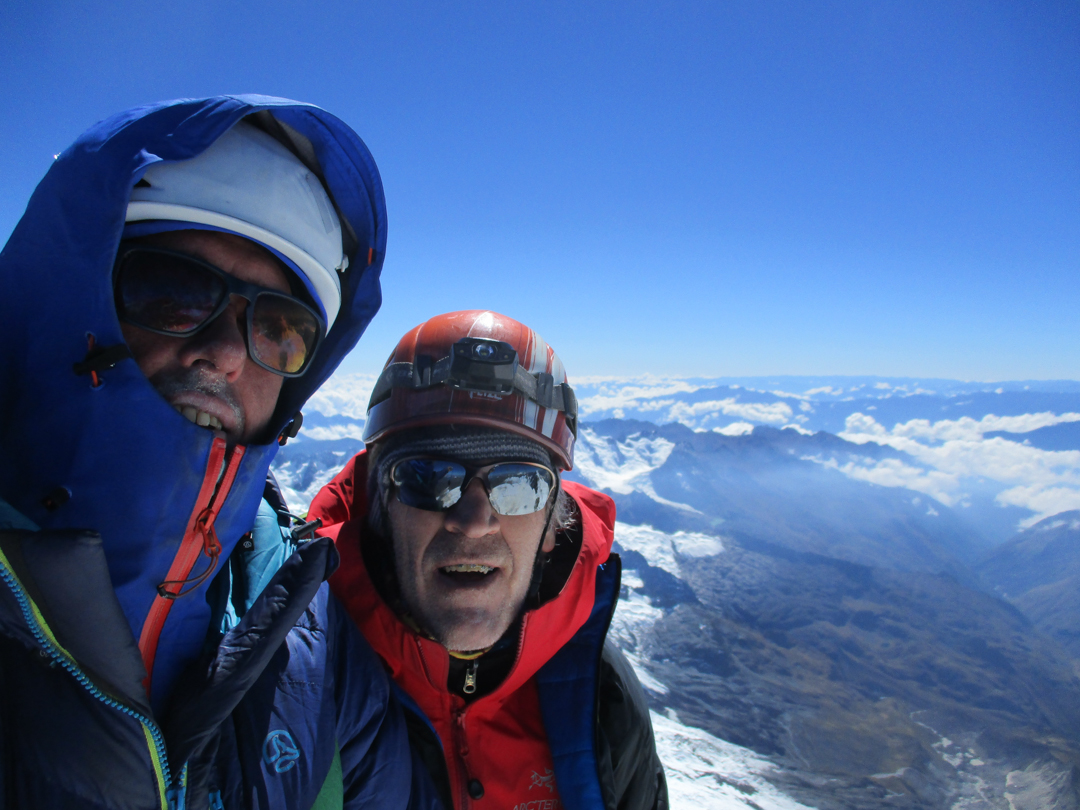 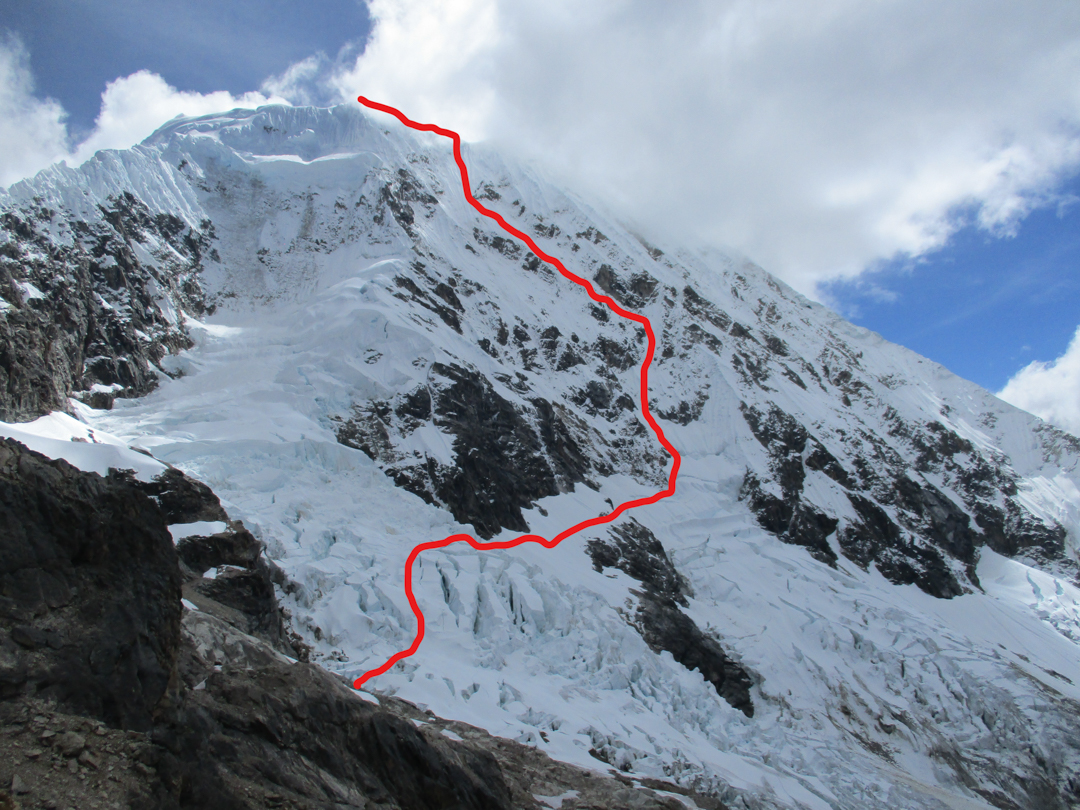 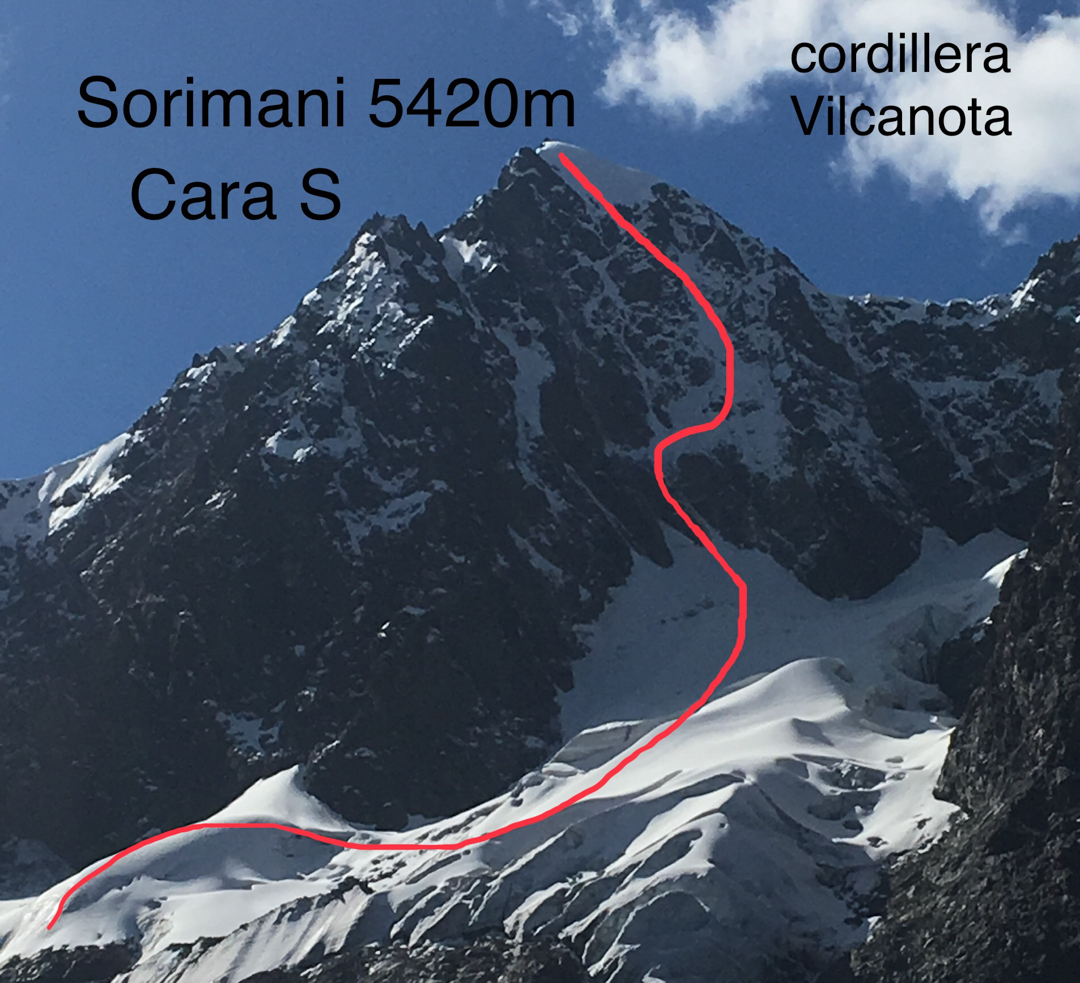 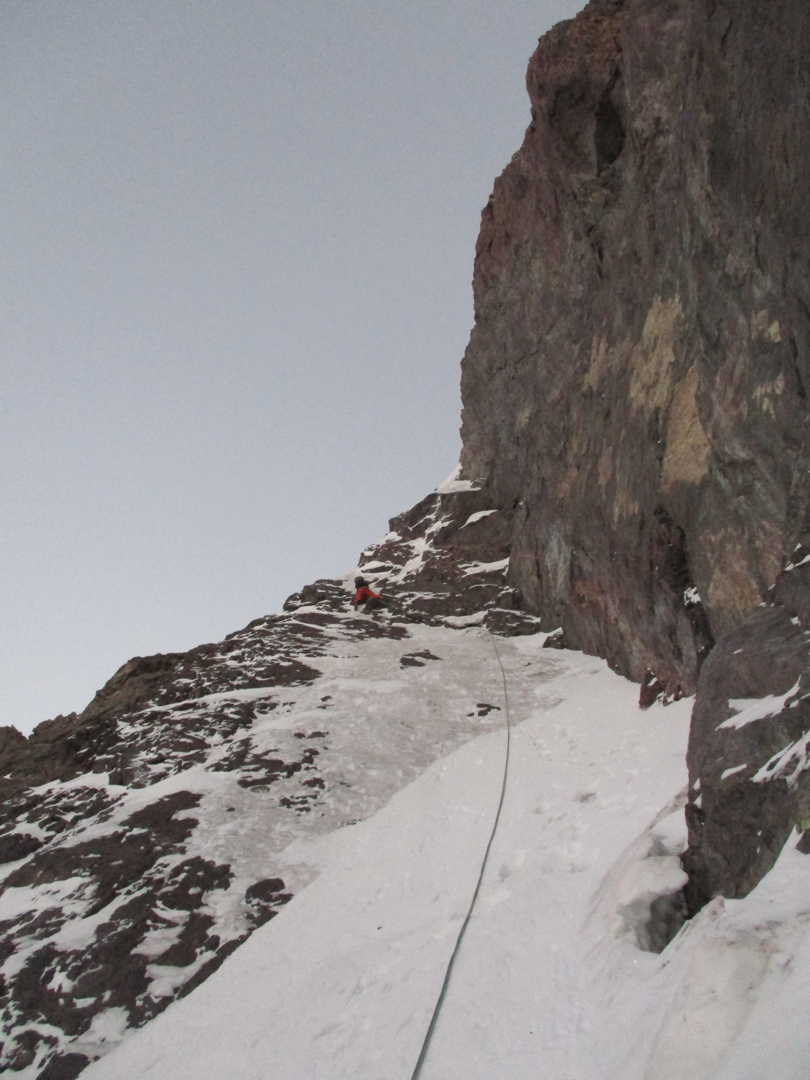