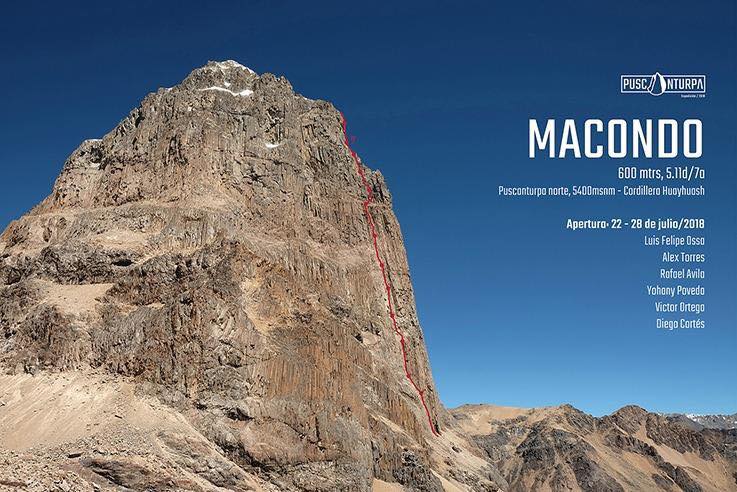 In July, Colombian climbers Rafa Avila, Diego Cortés, Jhoany Poveda, Luis Ossa, Victor Ortega, and Alex Torres organized an expedition to the Cordillera Huayhaush. They started their trip on July 21. After installing a base camp under Puscanturpa Norte (5,652m), they started their ascent of this fantastic peak on July 22.

The route they chose followed cracks in the columns on the left side of the north-northwest face. Their strategy was to climb in two groups. On the first pitches, they reported seeing some pitons from the route Macanacota (AAJ 2001). After fixing 150m of rope, they returned to base camp. [Editor’s note: According to the climbers’ topo, the 2018 route ascends mostly to the right of the route Macanacota; however, it is in the same vicinity as the route Barne Sua, and it is unclear the extent to which the 2018 route is new. See AAJ 2004 and 2010.]

Their second day on the wall was July 24. Ossa and Poveda led the climb and the other members carried food and gear. On July 25 the climbers had a near miss with rockfall and the team cleaned the initial pitches for free climbing. On July 26, Cortés and Poveda climbed three more pitches to reach the upper, lower-angle part of the wall.

On July 27, Avila, Ossa, and Torres climbed the final 200m of the wall proper. From there, Ossa descended to base camp, while his partners worked up the final 200m of terrain to the summit. A dangerous cornice stopped the ascent to the very top at 8 p.m. The group reached base camp again at 1 a.m. on July 28.

Three members of the team later tried to complete the route in a single push to the summit but only reached the same high point as their friends. They climbed some pitches free but the route awaits a continuous free ascent. The climbers called the 13-pitch route Macondo (600m, 7a).