On April 12, at approximately 1:15 p.m., the Coconino County Sheriff's Office received a call regarding an accident at the Pit. The county search and rescue unit responded, along with the Flagstaff Fire Department and Guardian Medical Transport. It was determined that Person 1 fell approximately 30 feet while leading Sunshine Daydream, a 5.7 sport climb. Person 1 had ascended approximately 20 feet to a small ledge and then continued up. She was attempting to clip the third bolt above the ledge, and the belayer had paid out slack for Person 1 to make the clip, when she lost her grip and fell approximately 30 feet onto the ledge.

Person 1 sustained a head injury, thoracic spine injuries, and a pelvic injury. Rescuers were able to access Person 1 by hiking up a small drainage to the left of the route. She was packaged in a litter, and a steep-angle lowering system was established to lower Person 1 to the bottom of the canyon, from which a litter team carried her out of the canyon to a waiting ambulance.

On this climb, Person 1, age 23, was leading outdoors for the first time. (She had previously led climbs in an indoor climbing gym.) Person 1 was not wearing a helmet. The belayer, Person 2 (age 18), had five years of experience and had climbed in the area before.

The weather on April 12 was very windy, with gusts from 45 to 60 mph However, Person 2 did not feel that the wind played a factor.

This route is rated 5.7 and has been described as a good route for first leads, with eight bolts and good clipping stances. The potential complicating factor was the intermediate ledge, which provided a hazard if a clip was missed and the climber fell. The other hazard was the high wind, which may not have affected the climber's ability to ascend the route but could have made verbal communication difficult between the climber and the belayer. A helmet may have mitigated some of the injuries sustained by Person 1. (Source: Aaron Dick, Coconino County Sheriff’s Office.) 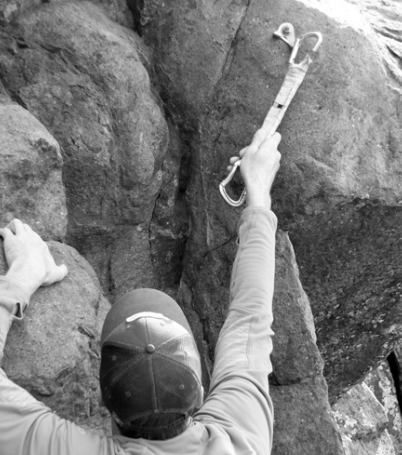 Editor’s note: Ledge falls are one of the hazards that new climbers generally won’t encounter in a gym setting but are frequently found on outdoor climbs—especially on easier routes like this one. When transitioning to outdoor routes, climbers must learn to judge such hazards and avoid falls that might be inconsequential in the gym but could be very serious outside. Seek a balanced position before attempting a difficult clip, and don’t pull up slack unless you’re in balance. Practice downclimbing to a rest position to recover when a clip can’t be made the first time. A homemade or purchased “stiff draw” (see photo) may allow shorter climbers to clip bolts that are just out of reach.