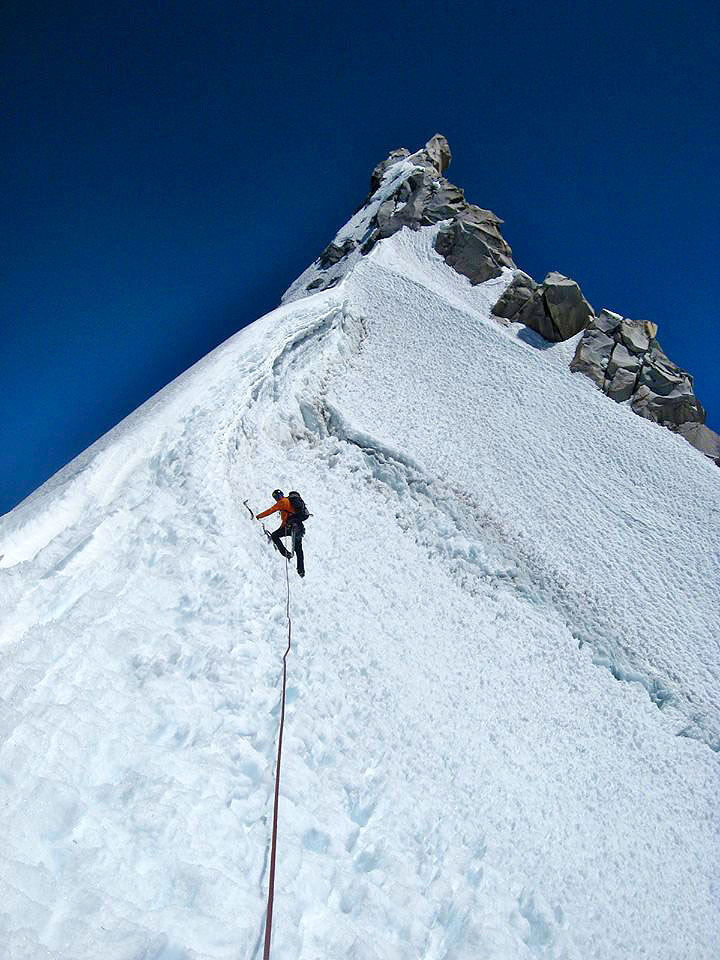 In August, Peruvian IFMGA guide Marco Jurado, along with Frank Huamán and Misael Mendoza (both Peru), traveled to Reserva Paisajística Nor Yauyos Cocha, east of Lima. After traveling through Huancayo, they made camp at 5,070m at a small lake under the northeast side of Nevado Pariacaca Sur (5,750m), which is the main summit of Pariacaca.

On August 8 they started climbing at 6:30 a.m., reaching the glacier and crossing some crevasses and ice bridges. They began up the lower northeast face with two pitches on rock, following cracks. They then reached a snowy shoulder leading to the final knife-edged north ridge. Mendoza waited here while Huamán and Jurado continued up the final 100m to the summit, with a serac and some crack climbing.

The three descended the east side of the mountain and reached base camp again at 6 p.m. Their route is Wanka Ñan (650m, AD+ UIAA V+ M3), and its upper portions are likely similar to the 1972 route and possibly the 1938 route; certainly snow and ice conditions have changed considerably since those earlier ascents. Jurado notes that the mountains around Nevado Pariacaca have a lot of possibilities for new routes.

[Editor’s note: Nevado Pariacaca (also spelled Paryaqaqa or Pariakaka, and also known as Tullujuto or Tulluqutu) has two summits; the north summit is 5,730m, and the south is 5,750m. Both were first reached by American expeditions led by T.A. Dodge—the north in 1936 and south in 1938. The south summit was reported to have been climbed by its south ridge in 1968, by its west ridge in 1970, and its northeast ridge in 1972. All of these ascents were made by a north or east approach; however, some expeditions seem to have misidentified the various aspects climbed. The 1968 route likely ascended the east-southeast ridge, and the 1970 route likely ascended the north ridge. Pariacaca’s south and west aspects are steep, snow- and ice-covered faces with up to 500m of prominence. The only known route on these faces is Peru 6 Mil, a very difficult route climbed in 2005 by Diego Fernandez and Guillermo Mejia on the southwest face of the south peak.]