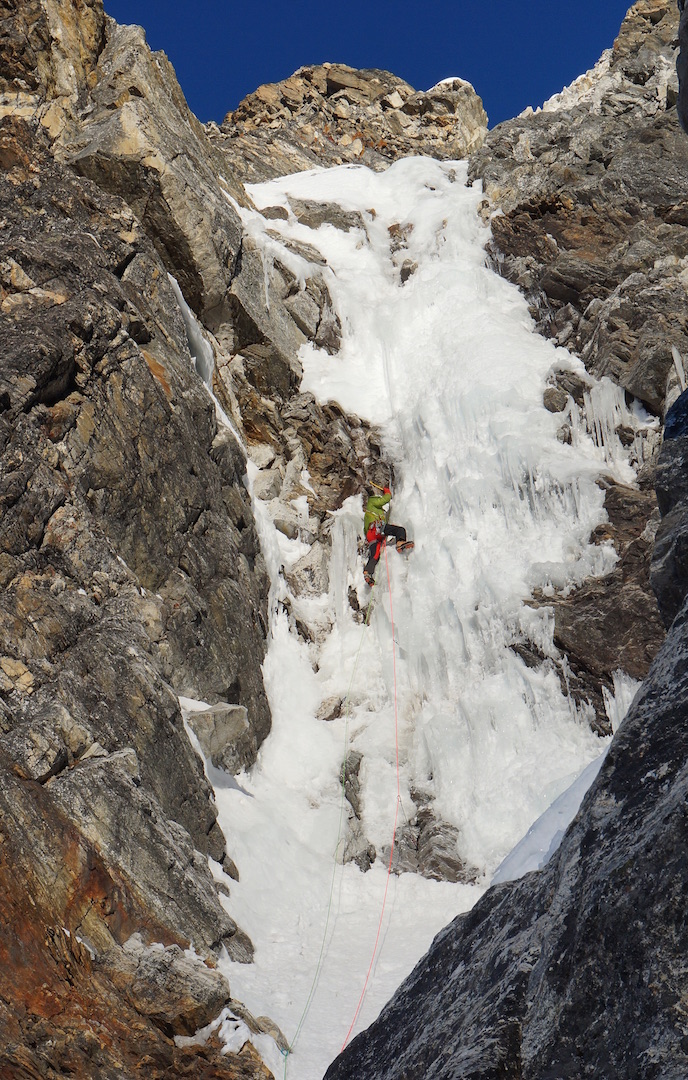 Our friends Paula Alegre and Oriol Baró were already in the Rolwaling when Jordi Corominas, Jonatan Larranaga, and I arrived. In a week or so we were at the base of Chugimago North (5,945m HMG-Finn map), planning to make the second ascent of Infleti, climbed by Oriol and Paula some days earlier. (See report.) There was a rock entry, then some mixed, and a finish over straightforward snow. It proved quite tough for us, as we were still trying to come to terms with the altitude, but the panorama, including Everest, Tengkangpoche, Tengi Ragi Tau, Menlungtse, and Gaurishankar, was unbeatable.

After two days’ rest we decided to head for Chekigo (6,257m), where we had spotted a direct line up the south face to the summit. Although the line took a central spur, the initial section of the route was serious threatened by a large serac barrier to the right. We had to move fast through this section, and decided to travel light, hoping to climb and descend the face in a day. We began at midnight with a mixed section (M5) that was difficult to protect. Above were four pitches up to M4 and AI5, but as we were still “running” we had no time to enjoy them. Snowfields allowed us to move up and left, away from the serac. Next came three steps that we had observed from below the face. The first proved straightforward, but the second and third were AI5 or 5+. We were now at ca 6,000m. The climbing became a little run-out, and we were only able to place reasonable protection of a section of sustained M6. Above that, 300m of unconsolidated snow, where we had to be careful, and a little mixed climbing, led to the top.

Our idea was to descend the line taken by Oriol and Paula after their ascent of Via Sopeti. It took a long time to descend the west ridge to their exit point, but after that it was simply a question of rappelling to the bottom, which we reached 20 hours after starting the route. We named our line Shiva–Straight to the Top (1,200m, AI5/5+ M6), and felt fortunate to be able to climb a peak of which previous ascents can probably be counted on the fingers of one hand.