The team established base camp on August 16 at 4,200m in the middle of the glacier, seven days after being dropped north of the valley by truck. Highlights of the trip are reported below; see the online story for all ascents.

On the 20th Isa, Morrell, and the Zholobenkos made the first ascent of Ledenaya Stre'coza (Ice Dragonfly, 4,892m) by the west ridge (Butterflies and Hurricanes, D-). This is a prominent peak at the head of the western branch of the glacier and, climbed from a col at 4,665m, had a section of Scottish 3/4. On the 26th the Zholobenkos returned to climb the north flank and east ridge, dubbing it Sparrow Route (AD).

On the 21st the Zholobenkos climbed a new route on Kucyk (Pony, 4,705m), following the north face, northwest ridge, west ridge, and finally west face (Broken Pony, D-). There was an excellent ice pitch of 70-80°. This peak was first climbed by the Poles in 2010. On the 24th the same pair made the first ascent of Ak-Baital East summit (Pt. Slepota or Blindness, 4,970m), climbing the south ridge at PD+.

The next target was Nochnoi Motyl (Night Butterfly, 5,056m), which lies close to the head of the main glacier, where it splits into west and east branches. It was first climbed in 2010 from the south. On the 28th Morrell and Alex Zholobenko climbed the North Face Corridor at TD-/TD (ice to 70-80°).

Lun'noe Rebro (Moonlight Arête) is marked on maps as a single peak of 5,102m. It is actually a series of points on a ridge. On the 20th Gilmore and Kernan climbed the 700m Tramadol and Fingertape (D), following a couloir on the left side of the west-northwest face to gain Pt. 5,065m (Scottish 4). On September 1 Iza and Alex Zholobenko added First Gully (D) to the right, finishing on Pt. 5,120m, the highest of the summits.

On the 26th Gilmore and Kernan made a traverse (Eagle Traverse) of the previously virgin border peak Uighur (4,979m). They climbed the north face to west ridge, then descended the east ridge (D). On the 30th the same pair made the first ascent of the northwest face of Skalni Kon (Rock Horse, 5,189m), a peak on the Dzhirnagaktu - Kyzyl Asker divide that was first climbed in 1985 by Kazakhs, and then again in 2010 by Poles. The 800m route was graded TD (Scottish IV, 5 in the upper section). They descended the west ridge, and then southwest to the main glacier (AD). Their descent route was ascended on the 30th by Isa and Alex Zholobenko. On the 28th Isa and Vladimir Zholobenko climbed up the west flank (PD) of Kazalnica (4,786m), a minor point on the west ridge of Raven Peak and first climbed in 2010.

All in all the weather was mixed: quite poor during the first half of the expedition, but considerably better afterward, when there were no full days of bad weather. The expedition was grant-aided by the Mt. Everest Foundation, Mountaineering Ireland, and Queens University Belfast. 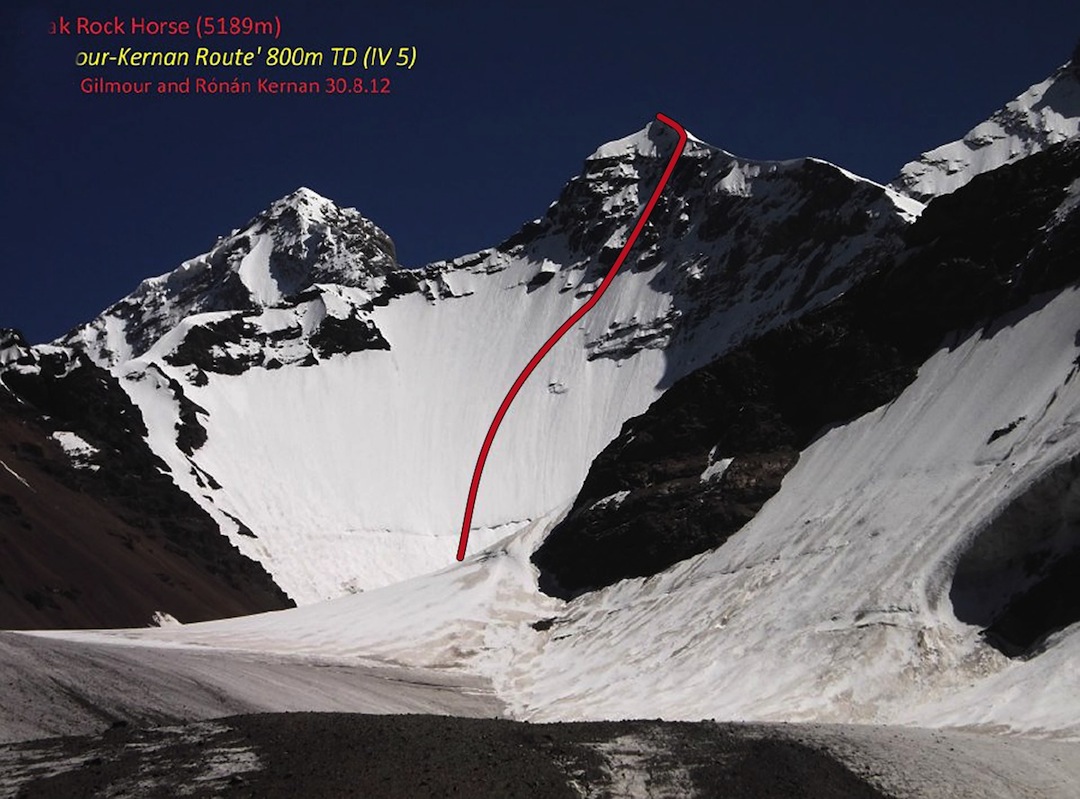 Rock Horse, showing the 2012 route (TD) on the northwest face. The peak had been climbed twice before.
Bradley Morrell

Rock Horse, showing the 2012 route (TD) on the northwest face. The peak had been climbed twice before.
Bradley Morrell