Mt. Parandas (4,250m) has an 800m north wall with lots of overhangs but also decent ledges, so one can climb without using a portaledge. The sun hits the north wall for only 1 to 1.5 hours a day. I had studied a line on the right side in 2010, but during that trip we climbed a different route on the left [AAJ 2011].

Sergey Maksimenko, Taras Tsushko, and I began climbing our new route on August 3. A slab that looked problematic from below was found to be difficult but not hopeless. We spent two nights in a tent on a good ledge, fixing pitches above. We then pulled up the ropes and followed beautiful corners, spending the third night sitting on top of a flake. We transferred to the left by pendulum, found ourselves in a corner again, and climbed past an overhang. Above this was a blank wall that forced us to join the Mogila Route for one long pitch. Where the Mogila Route turns sharply left, we continued up, crossing an overhang to reach a huge roof, which we bypassed to the right.

After another night in the tent, it seemed the route was about to get easier, but this was an illusion. An overhanging wall with poor features led to corners and a less steep but broken wall. There was ice in the corners and on the ledges. We did not make it to the ridge before dark, and had another sitting bivouac. On the morning of the sixth day, after 40m of difficult climbing, we reached the ridge. By 11 a.m. we were on top of Parandas, and then rushed down. I think is the most difficult line climbed on Mt. Parandas. We did 23 pitches on the wall and placed 17 bolts (seven for belays).

Alexander Lavrinenko, from a report at Mountain.ru provided by Anna Piunova and translated by Ekaterina Vorotnikova 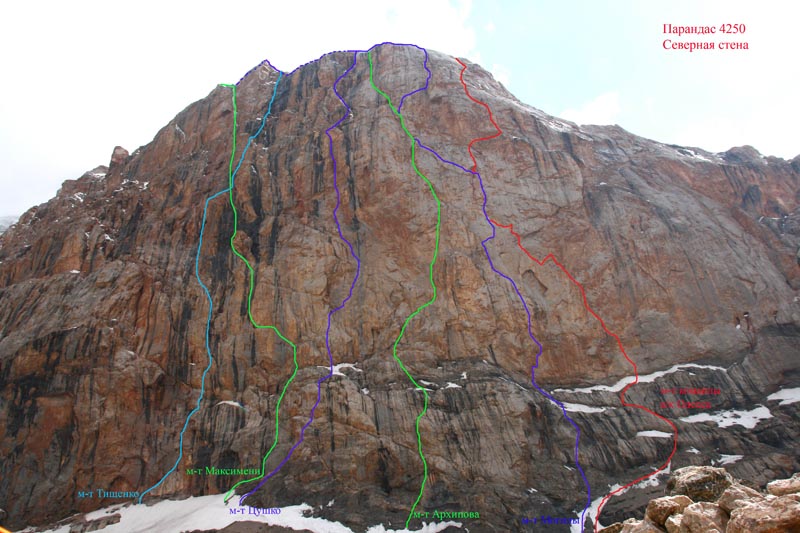