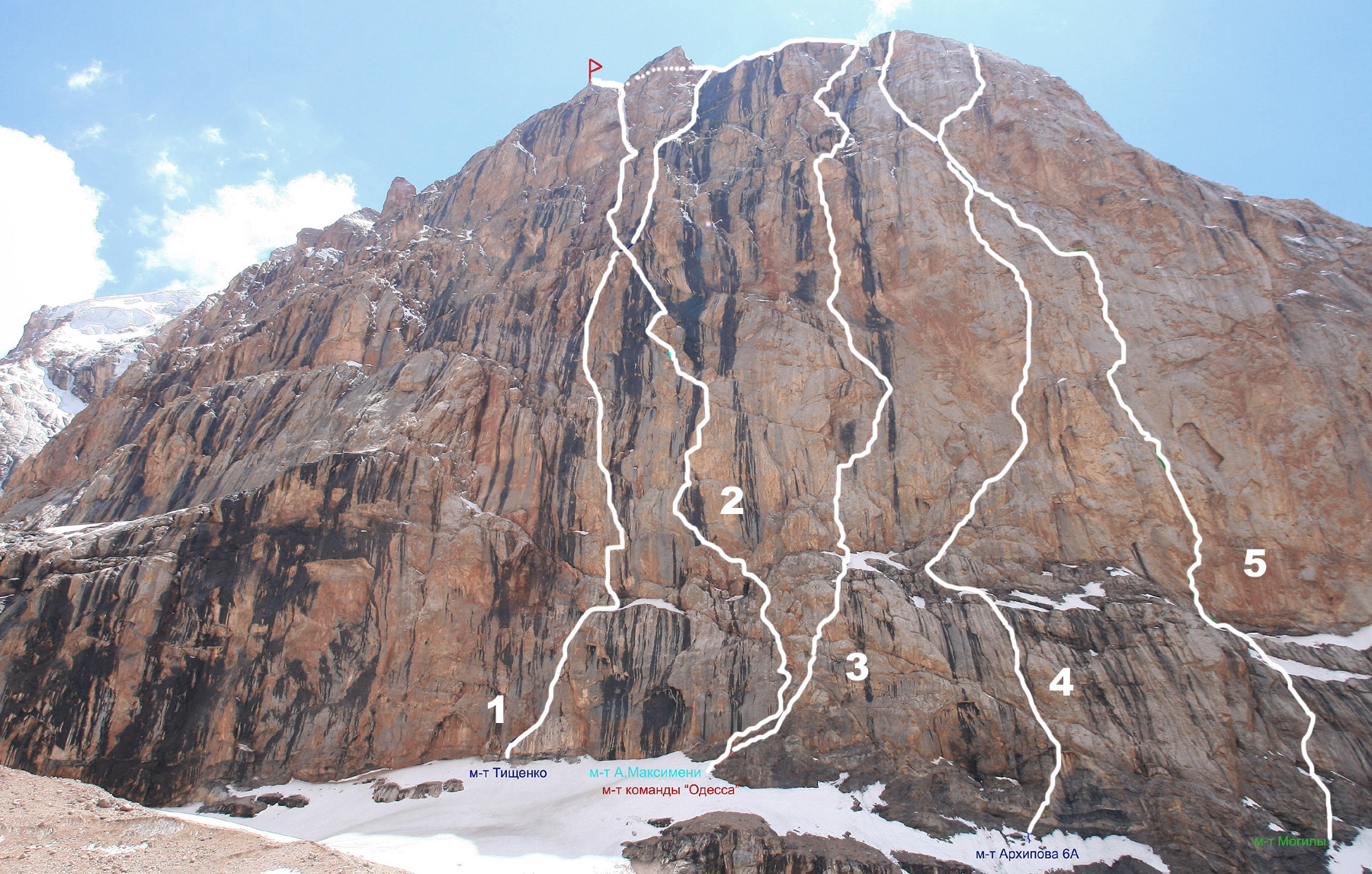 The main mountaineering development of the Fanskiy Mountains took place in the 1970s and early ’80s. After that, attention turned to the newly discovered areas of Karavshin and Laylak. It appeared that all good lines in the Fanskiy had been climbed. However, looking at the walls with a fresh eye, climbers have recently discovered several new and logical lines. Our team for Parandas comprised Alexander Khomenko, Maxim Polyakov, Taras Tsushko, and I.

Parandas is rather small by Fanskiy standards with an official altitude of 4,250m. However, our GPS registered 4,600m on the summit. It is not an independent summit but more a wall on the ridge leading to Zamok (Castle). In the old days climbs on Parandas were only considered complete if they finished up the very long crest to the main summit of Zamok. However, times change, and nowadays a route on Parandas alone is acceptable. The main face is 800m high and two kilometers wide with marble-like dolomitic limestone. After the two ascents in 2010 there are only five routes on this wall and still plenty of scope for others.

We climbed a prominent line up the center of the face, characterized by a big C-shaped overhang at mid-height, above which a deep-red corner rises to large overhangs that can be turned via a system of corners to the left. In general the wall is compact with only a few loose sections; we only had to drill bat-hooks in the section around the C-shaped overhang. Climbing was often hampered by streaks of water or ice, but I think we chose the optimal time for an ascent—the first half of July—because warmer weather could pose the problem of rockfall from the summit ridge. We were able to climb without a portaledge, bivouacking each night on ledges. One night we had to sleep sitting. Similarly, there was no need to carry water, as there was plenty of snow and ice on ledges. We climbed 28 pitches to the summit ridge and from there scrambled several hundred meters to the top. Named Odessa Route, the difficulties were Russian VI6B, A3.

From the top we examined closely the west face of Bodhona, particularly the right side. There are seven routes on this wall, some of which provided their first ascensionists with Championship prizes in the former Soviet Union. However, no one had attempted the buttress on the right. We took several days rest at Alaudin base camp and then started up a system of corners in the lower buttress. It took two days to climb the first six pitches. Here, a small ledge allowed us to bivouac in a semi-prone position. On the third day we committed to the wall and managed to reach a big outward sloping, snow-covered terrace below the second step. It was not a good place to spend the night.

The step has a number of large overhangs, but we managed to find a logical route through, though we made slow progress in bad weather and had to sit out a night beneath roofs. The weather improved the following day. We finished the second step and began on the third, which was easier. On the snow-covered terrace below this, we met Maximenja, who had been soloing a route to the right. On our eighth day we arrived at a snow and rock ridge leading to the summit tower. A 40m rock step festooned with huge icicles proved an unexpected obstacle. We climbed the thickest and most stable of these and then continued to the summit over relatively easy snow and rock. The vertical interval of the route was 1,188m (840m on the west face) and gave us 1,552m of climbing (26 pitches plus some moving together) at Russian VI 6B, A4 70–75° ice.