In 2008, Josh Thompson and Glen Griscom put up the first route on the slightly chossy-looking buttresses just north of the Black Wall, known as the Tan Buttresses. They called their route Noth’n but a Good Time (400’, II 5.11- R). Later that summer, after deciding that climbing to the right of Roofer Madness was a little cold for September, Steve Su, Jonny Copp, and I retreated to the relative warmth of the Tan Buttresses and discovered they were so featured that all one needs to new-route is a regular rock rack and a little bit of creativity. In the ensuing years, I managed to drag various people out to climb a number of ill-planned new routes. Meanwhile, Josh Thompson put some effort into equipping, cleaning, and sending the high-quality Fallen Angel (330’, II 5.11+) with Josh Wharton. Recently, a few other groups have discovered the joy of new-routing on the Tan Buttresses. At present, there are 15, four to six-pitch routes ranging from 5.8 to 5.12, with the majority in the 5.10 to 5.11 range.

During my obsession with the Tan Buttresses, I noticed there were some unclimbed dihedrals on the right side of the Black Wall. In June of 2010, Josh Finkelstein and I did the shorter, right-hand dihedral: The Ant Farm (500’, III 5.10+ R). A month later, Josh Thompson, Doug Haller, and I climbed the left-hand dihedral, finding great features and lots of vegetation: The Emerald Highway (700’, III 5.10+). Afterward, Josh was intrigued by features to the left of the dihedral, so, two years later, we returned to have a look at them on rappel. While we were disappointed by the features that Josh had initially noticed, we were amazed by a series of thin cracks and chicken heads that continue 400’ above the top of the hard climbing in the dihedral. A couple of days of route preparation produced a very nice climb with six or seven pitches of 5.10. A violent thunderstorm on the last pitch produced a spectacular rainbow on the hike out: Rainbow Highway (800’, III 5.10+).

Additionally, in 2009, several people made the long walk to the large northwest buttress of Mt. Warren, located down-valley from the Black Wall cirque, and climbed several long, fun mixed ice and rock routes. In the summer of 2012, Chris Sheridan and Andy Grauch explored the rock climbing potential on this buttress and found several routes up to 800’ in length. The most notable of these appears to be Highrise Buttress Left (800’, III 5.10+). 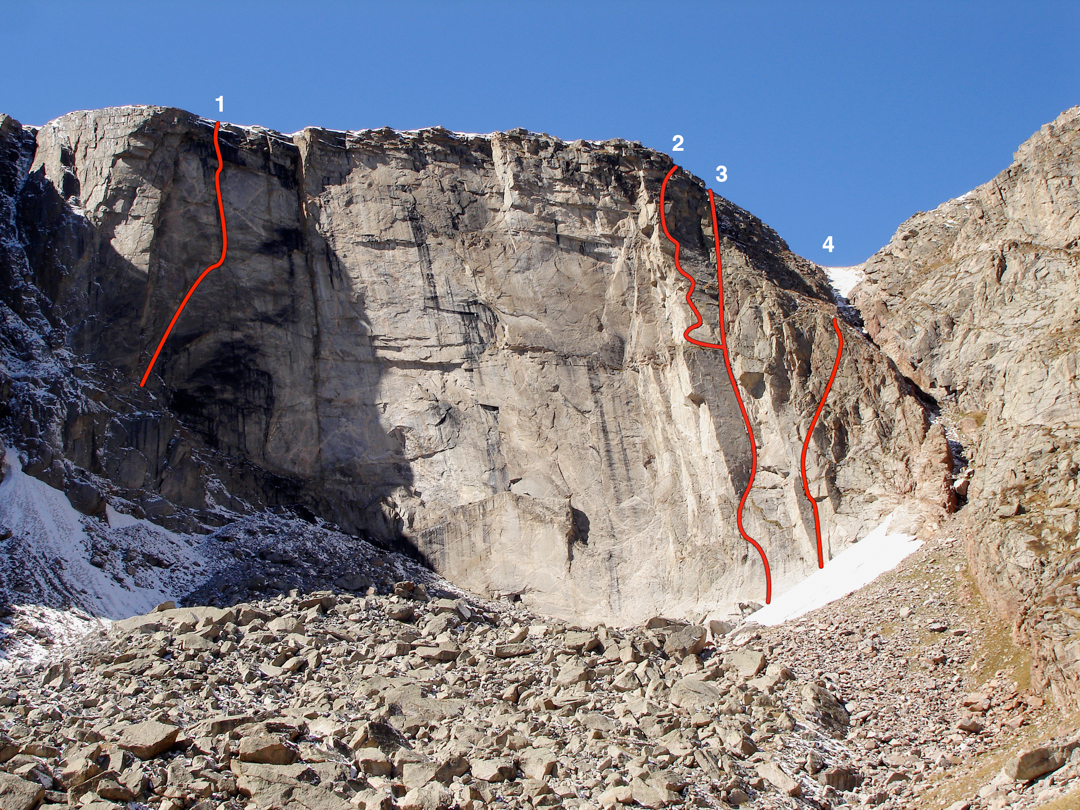 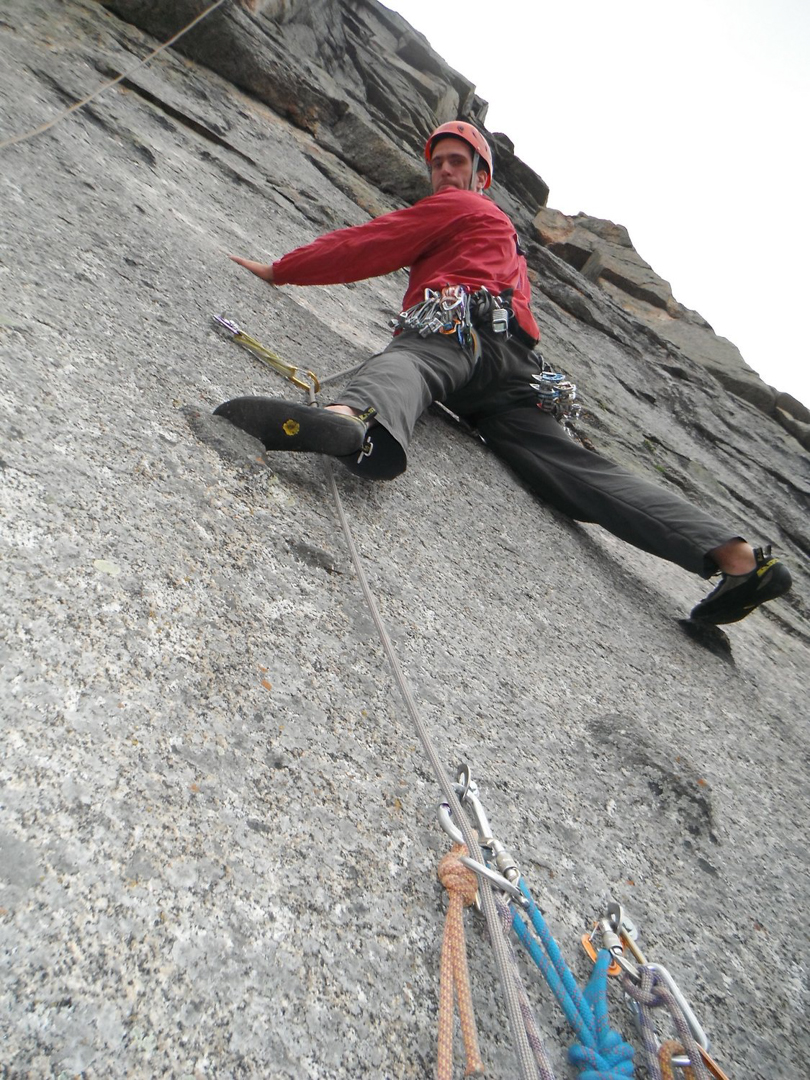 Josh Thompson leading off the belay on the Rainbow Highway.
Benjamin Collett 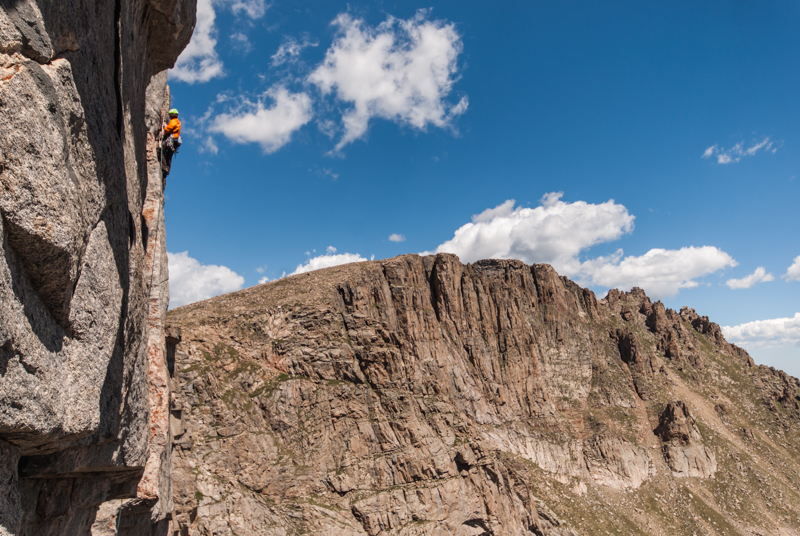 The Tan Buttresses are in the background.
Dan Gambino 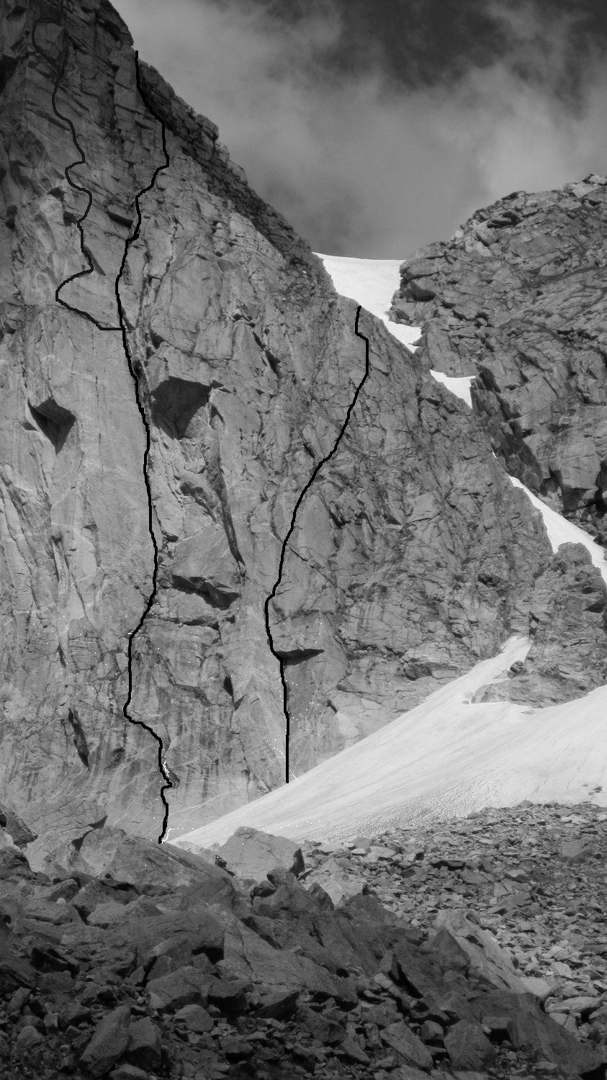 Overview of the new routes on the right side of the Black Wall, showing the Ant Farm and Emerald Highway variation (left) and Rainbow Highway (right).
Benjamin Collett
Previous Next

Josh Thompson leading off the belay on the Rainbow Highway.
Benjamin Collett

The Tan Buttresses are in the background.
Dan Gambino

Overview of the new routes on the right side of the Black Wall, showing the Ant Farm and Emerald Highway variation (left) and Rainbow Highway (right).
Benjamin Collett
Previous Next