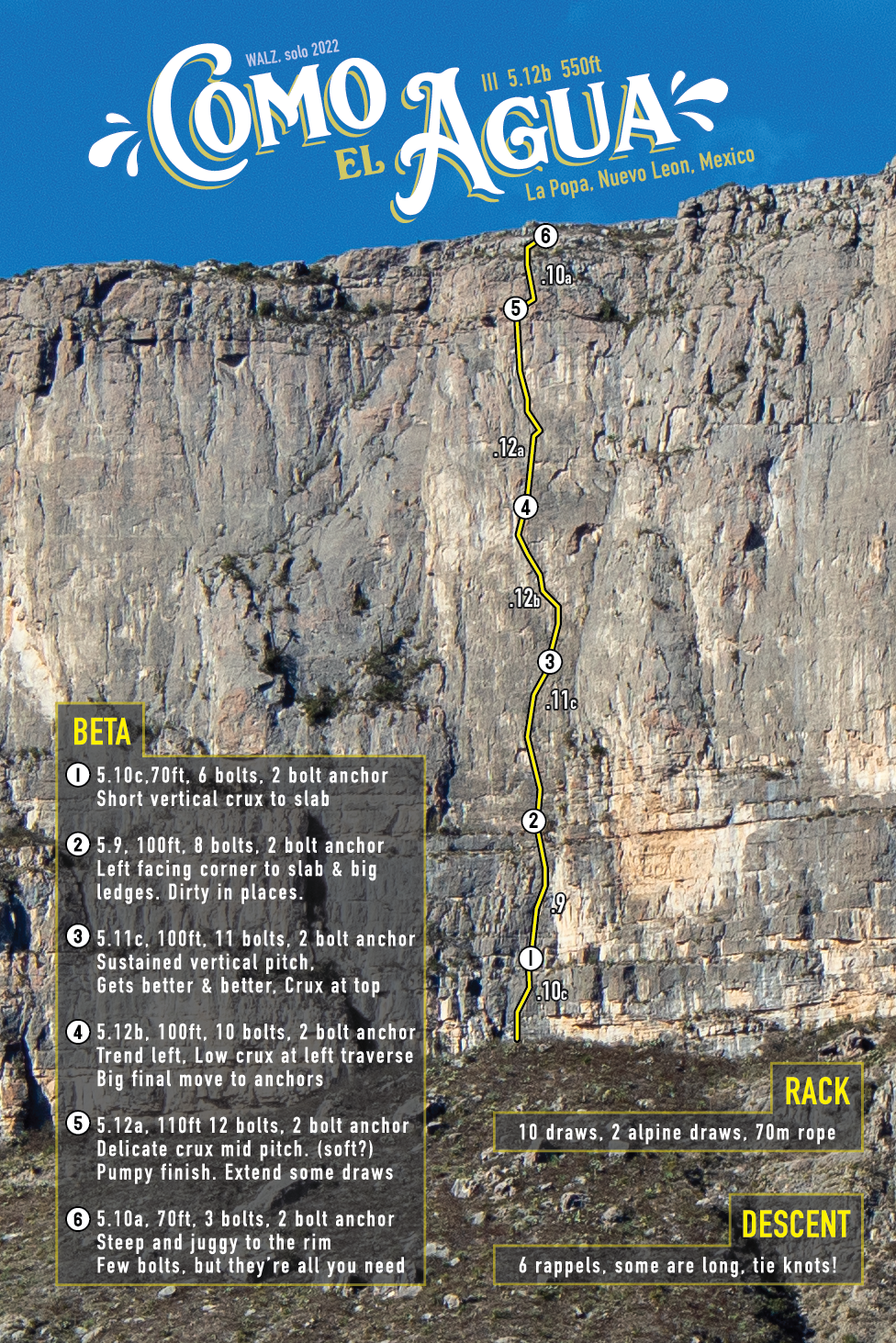 I knew I was going to Mexico and that was about it. I didn’t know where I was going to climb or with whom—if anyone at all. I had two haulbags full of bolting equipment, a fresh divorce, and all the time in the world. I decided to head to La Popa after seeing photos and hearing about its relative remoteness compared with busy El Potrero Chico. I reached Monterrey still not having found any partners, so I embraced a solo mission.

The approach to the northeastern rim of La Popa from the tiny village of San Jose de La Popa, is a measly 25 yards if you have a vehicle with serious rock-crawling capabilities. If you’re like me, driving an economy rental, it’s a three-mile hike, mostly straight up. Over the course of a week and half, I did this approach more times than I can count. After a couple days of dropping in to inspect various sections of the five-mile-long wall, I found a line on the northeastern aspect with continuously quality stone. It’s located about 500m to the right of the route El Gavilan (9 pitches, 5.13a). Though the wall is seemingly endless, the sectors that sport good rock from the dirt to the rim seemed limited.

I worked two to three days at a time, cleaning, working out moves, and equipping the line. Between these days I drove to Hidalgo to rest and charge batteries for my poor little Milwaukee M12, a 12-volt drill that kept up surprisingly very well. By the time the route was ready for a send attempt, I had made friends in Hidalgo who were excited to give me a catch on the route. However, after having spent so much effort working on the route solo, I decided that the best style would be to send the route alone as well.

Before my first send attempt, I pulled all my static rope from the wall and hiked it down. If I failed and for some reason couldn’t hang-dog my way up the wall, it would be an eight-mile hike around the mountain back to the car.

On March 20, 2022, I rapped into the wall, stashing food and water at both the crux belays. I led the route from the ground using a continuous loop method. I belayed myself using an unmodified Grigri on my belay loop and a Micro Traxion on my chest to keep the weight of the brak rope off the Grigri, making it easier to feed myself slack while free climbing. The first pitches were awkward as I remembered how to free climb while belaying myself, managing slack, and clipping the right rope to the draws. By the time I made it to the base of the 5.12 pitches, I had the system dialed and sent both of them first go.

In total it took me roughly eight hours car to car to hike three miles up, rap the route, free climb every pitch, rap every pitch to clean anchors, jug every pitch back to the high point, and finally hike back to the car. I named the 550-foot route Como el Agua and proposed a grade of 5.12b, but that could be a sandbag as I wired the moves so well prior. Or it could be soft, as things often feel harder solo.

Photo-topo of Como El Agua on the northeast face of La Popa.
Dakota Walz
Previous Next

Photo-topo of Como El Agua on the northeast face of La Popa.
Dakota Walz
Previous Next