Running in the Shadows

A FOUR-DAY ADVENTURE ON YEXYEXÉSCEN 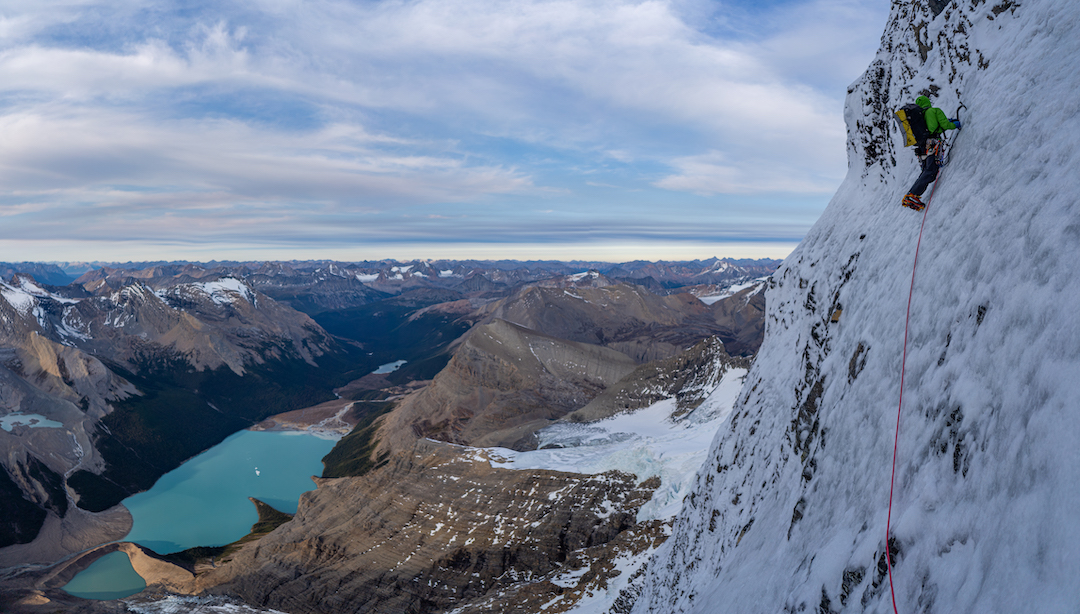 I first laid eyes on the Emperor Face in October 2018. Winter had already arrived, and lines of snow and ice shimmered in the afternoon light. The wind whipped snow over the ridgeline and clouds spun around the summit. A prominent gully system left of the classic route Infinite Patience (Blanchard-Dumerac-Pellet, 2002) immediately captured my attention. First because it was a logical weakness that looked like it would suit a fast-and-light style, and second because I knew nothing about it. I left Mt. Robson that day feeling equal parts inspired and intimidated.

I later learned that striking line was, in fact, a variation of the route envisioned on the first serious attempt at Robson’s Emperor Face by Americans Pat Callis and Jim Kanzler in 1974. The pair climbed high onto the face through “The Jaws’’—a two-pitch choke point where three major gully systems converge—before deciding, after two bivouacs, to escape horizontally to the north face, having misjudged the ice conditions on the upper face.

The gullies above The Jaws received little more attention until 2010 when, on their third attempt of the year, Canadians Jason Kruk and Jon Walsh more or less followed the middle gully to reach the Emperor Ridge, Robson’s northwest ridge, bounding the right side of the concave Emperor Face. They descended the ridge without going to the summit due to incoming thunderstorms. I wondered if it would be possible to climb through The Jaws and aim for the right-hand gully above.

After a couple of winter seasons in Canmore and expeditions to Bolivia and Alaska, I felt ready to revisit the Emperor. In June 2020, Peter Hoang and I made an attempt but quickly deemed the face out of condition. After spending a warm night watching the face cleanse itself of its winter weight, the decision to bail was easy. The reconnaissance did provide valuable information, though, and I figured the copious amount of fluffy snow, stuck to the steep face like cotton candy, might solidify into solid ice by the fall season.

The short Canadian summer quickly passed, and soon I was back to checking the weather forecast daily, taking notes of freezing levels and snowfall amounts, and scouring social media for tourists’ photos of the face, which sits conveniently in the backdrop of one of the most popular hiking trails in the Rockies. A window appeared just a week before I was due to head south to the United States. A few days later, Uisdean Hawthorn (Scotland) and I were on the trail to Berg Lake, bags packed for four days in the Canadian wild.

Four days of clear weather is a lot to ask from the king of the Canadian Rockies. So when we started the approach in a drizzle, with the mountain completely shrouded in fog, we weren’t totally surprised. Halfway to Berg Lake, we stopped for shelter under the dense forest canopy. We brewed a coffee and I closed my eyes, already noticing the sharpening of senses that accompanies each alpine ascent. It was Uisdean’s first trip to Robson, and he had yet to lay eyes on the peak. I wondered if he could feel its presence. I appreciated the trust he had in me. This would be by far our most significant undertaking together. 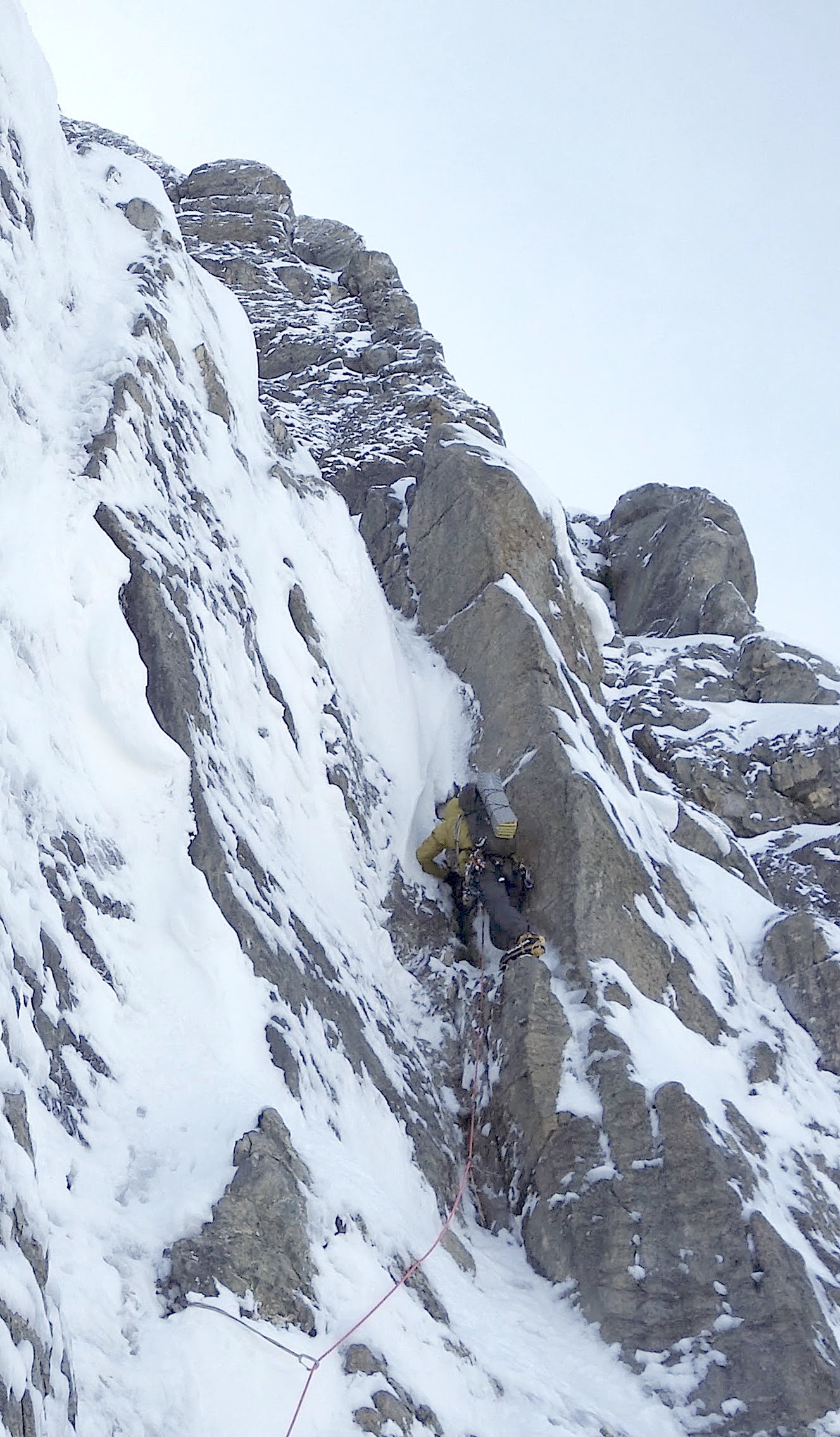 When the alarm went off at 1:30 the next morning, we got our first full view of the face from our bivy by the Robson River, which serves as the toe-numbing threshold between approach hike and mountain climb. The sky had cleared overnight, and a bright moon wrapped us in a blanket of stars. We were concerned about the quality and level of the freeze on the face, but after discuss- ing all the reasons not to go climbing, we laced up our boots and packed our bags.

The rope stayed in the pack as we scrambled through broken rock bands, avoiding the drainages still running with water low on the face. We crossed the freezing threshold and roped up just before The Jaws, which turned out to be a pitch of unprotectable near-vertical snow. Condi- tions improved as we climbed into the right-hand gully. We fell into a familiar rhythm, stopping to belay tenuous pitches of thin ice blobs over steep and compact limestone slabs, and moving together over large sections of lower-angle alpine ice.

In the early afternoon we reached the first of several crux rock bands. I twice tried to work my way up a thin ice strip that didn’t feel like it would hold my weight, and then backed off. The flow state we found earlier had dissipated, and the daunting reality of retreat began to penetrate our mental armor. Uisdean took the lead, sniffing out an overhanging snow-choked corner, and with slow and deliberate craft worked his body upward. The clearing of snow was laborious, and he had to rest and pull on a few pieces of gear as he progressed. He howled as he reached the belay above, and I joined him shortly thereafter. “You can take the boy out of Scotland, but you can’t take Scotland out of the boy!” he said, the fire back in his eyes.

After a couple more pitches, we stood below another steep rock band, the last big question mark of our route. I found a thin, vertical ice runnel, which I followed for nearly 60 meters and through several overhanging rock steps. I took an abrupt fall onto the leash of one ice tool (thankfully with the best protection of the pitch at my waist), then tied off my final ice screw, hammered in two mental pitons, and made delicate moves to the ice slope above. One more long mixed pitch brought us to easier ice, which we followed for several pitches to the Emperor Ridge, topping out the face after 19 hours of climbing.

We hacked out a decent tent platform on the edge of the abyss and began rehydrating and refueling. We had gained about 1,800 meters of elevation from our bivy in the valley, half of which was over new ground, comprising around 14 long and sustained pitches of the highest quality ice and mixed climbing. But the summit was still far away—only 500 meters higher but more than a kilometer horizontally over convoluted calf-burning terrain.

We woke dizzy from dehydration, a sea of clouds swirling outside the tent. With only 30 meters of visibility, we decided to make our summit bid via the “Patience Traverse” across the upper west face, bypassing the infamous rime-ice gargoyles that guard the Emperor Ridge. The route-finding was difficult, but as we neared the end of the traverse, the clouds broke just enough to help us locate the final ice pitches, which led us through a “tube” separating 20-meter rime towers. We topped out to an auspicious full moon rising, just above the cloud ceiling that had tested our mental fortitude all day. We howled to the moon and sat on our packs, savoring the realization of our vision and the comfort of horizontal ground, before putting up our tent, elated to shiver away a cold and windy night at the highest point of the Canadian Rockies.

The pre-dawn hours were rough, as our strung-out bodies struggled to stay warm. But the morning sun thawed our numb fingers and toes and energized us for the arduous 3,000-meter descent down the Kain Route and Patterson Spur. We trudged down glaciers, snow slopes, ridgelines, talus, scree, and water-worn rock to reach the ancient forests below. My feet were a mess, but I welcomed a newfound sense of clarity and awareness in the vast landscape. I felt like I could see each ripple of rock on the towering limestone walls lining the valley, and hear the sound of each droplet of water cascading down the nearby falls. 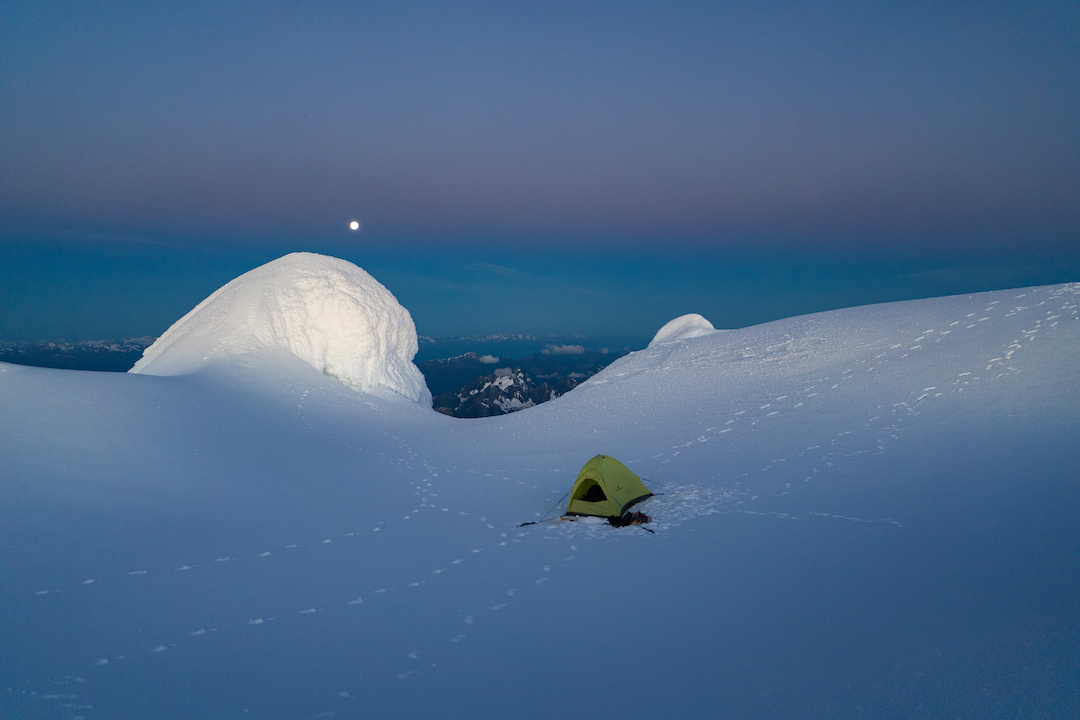 It is hard for me to imagine what Jamie Logan and Mugs Stump must have experienced when they made the first ascent of the Emperor Face in July 1978. My own climbing experience has been fully shaped by modern ice climbing equipment, ultralight gear, and up-to-the-minute weather forecasts. Yet our ascent bears a familiar resemblance to theirs. “The real key to climbing the Emperor Face was making the firm decision to try, regardless of the obstacles that nature and our imagination might place in our path,” Logan wrote in the 1979 AAJ. That much certainly still rings true.

We named our route Running in the Shadows as reference to the song that blasted from our car speakers as we turned onto the Yellowhead Highway and sped away from Robson. This will perhaps be my most treasured memory of the whole experience, when the climb, already completed, was still our secret, only a conglomerate of raw sensory experience and consciousness, all of which was released to the wind as we lowered the windows and sang and danced our way to pizza and beer.

Summary: Running in the Shadows (2,300m, VI AI5 M6, with a smattering of aid), a new route up the Emperor Face on the north side of Mt. Robson (Yexyexéscen) in the Canadian Rockies, by Ethan Berman and Uisdean Hawthorn, September 30–October 2, 2020. On the lower face, the pair climbed previously traveled ground through “The Jaws,” then broke right for about 14 pitches of new terrain, to the right of the 2010 Kruk-Walsh route, exiting in a similar location on the Emperor Ridge. They traversed alongside the upper Emperor Ridge and across the northwest face to reach the summit. Berman and Hawthorn walked about 20km to approach Robson and hiked back out, only the second party (after Dave Cheesmond and Tony Dick in 1981) to climb a new route up the Emperor Face and also reach Robson’s summit, without using a helicopter for the approach or descent. They told their story in Episode 34 of the AAJ’s Cutting Edge podcast (see below).

About the Author: Born in 1990, Ethan Berman lives in Canada, splitting his time between Squamish and Canmore, and works as an environmental and data science consultant.

Ethan Berman launching into one of the crux pitches on the Emperor Face. A discontinuous thin ice runnel split the rock buttress above and took the climbers through several steep rock steps.
Uisdean Hawthorn 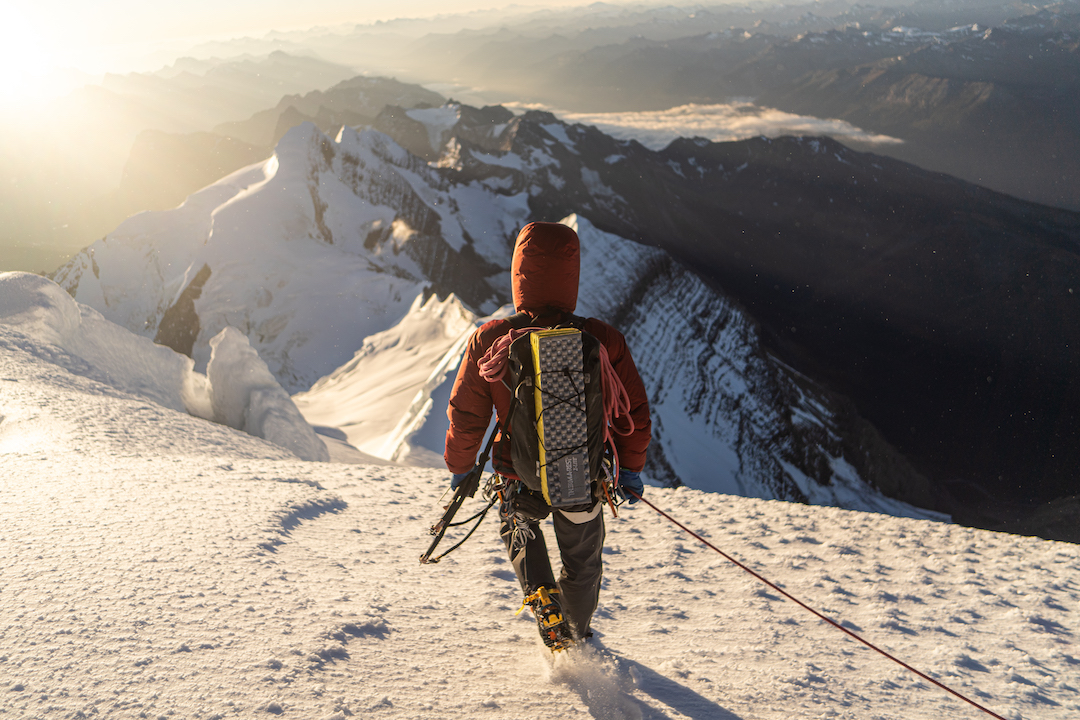 Ethan Berman starting the 3,000-meter descent off Yexyexéscen (Mt. Robson) in the Canadian Rockies. Berman and Uisdean Hawthorn made a rare car-to-car ascent of the Emperor Face to the summit of Yexyexéscen, without helicopter assistance.
Uisdean Hawthorn 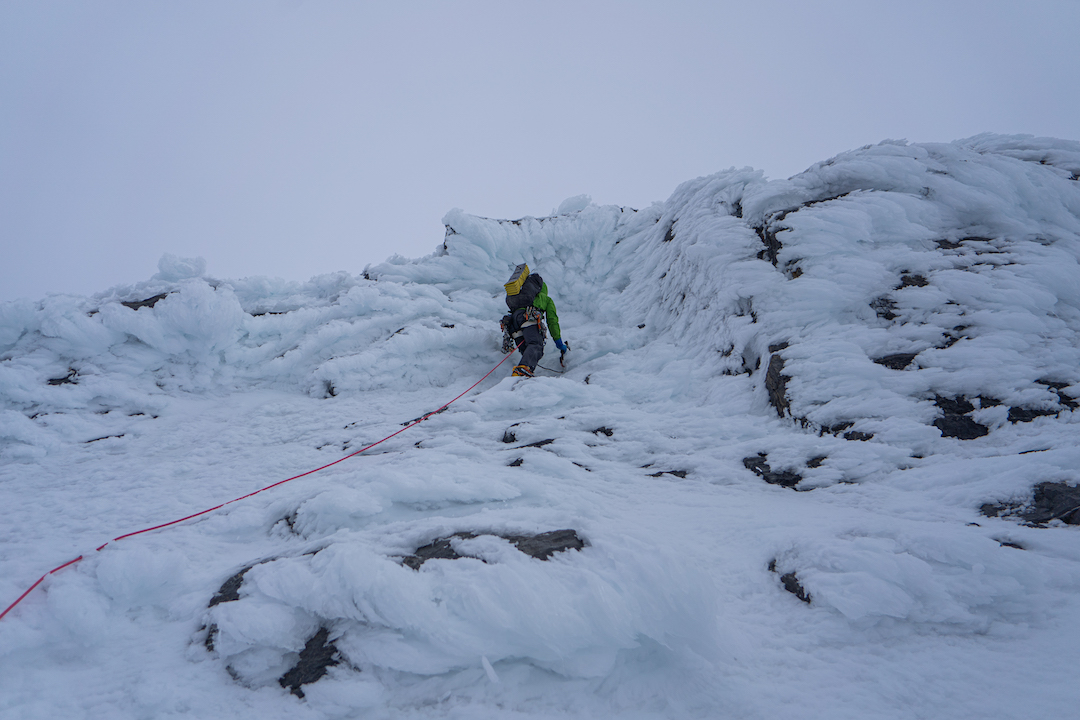 Climbing through the rime guarding the summit of Mt. Robson.
Uisdean Hawthorn 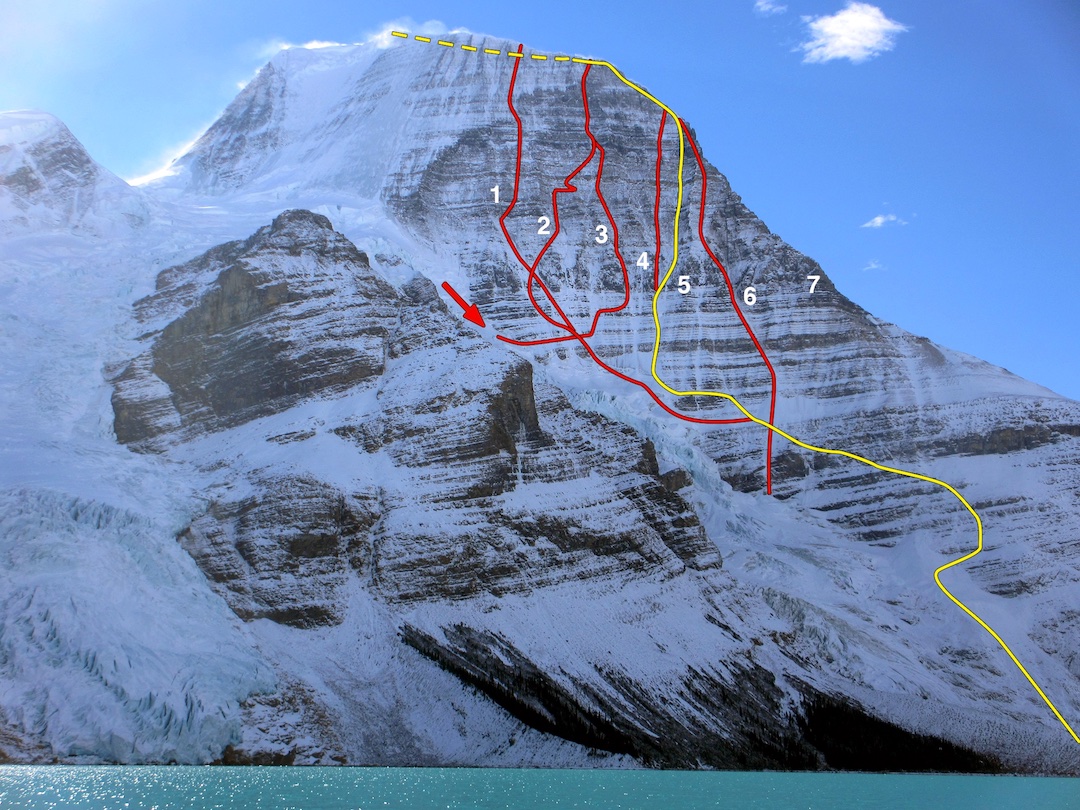 Moonlit bivy on the summit of Mt. Robson after the first ascent of Running in the Shadows on the Emperor Face.
Uisdean Hawthorn
Previous Next

Ethan Berman launching into one of the crux pitches on the Emperor Face. A discontinuous thin ice runnel split the rock buttress above and took the climbers through several steep rock steps.
Uisdean Hawthorn

Ethan Berman starting the 3,000-meter descent off Yexyexéscen (Mt. Robson) in the Canadian Rockies. Berman and Uisdean Hawthorn made a rare car-to-car ascent of the Emperor Face to the summit of Yexyexéscen, without helicopter assistance.
Uisdean Hawthorn

Climbing through the rime guarding the summit of Mt. Robson.
Uisdean Hawthorn

Moonlit bivy on the summit of Mt. Robson after the first ascent of Running in the Shadows on the Emperor Face.
Uisdean Hawthorn
Previous Next