An Autumn Ascent of Sani Pakkush in the Karakoram 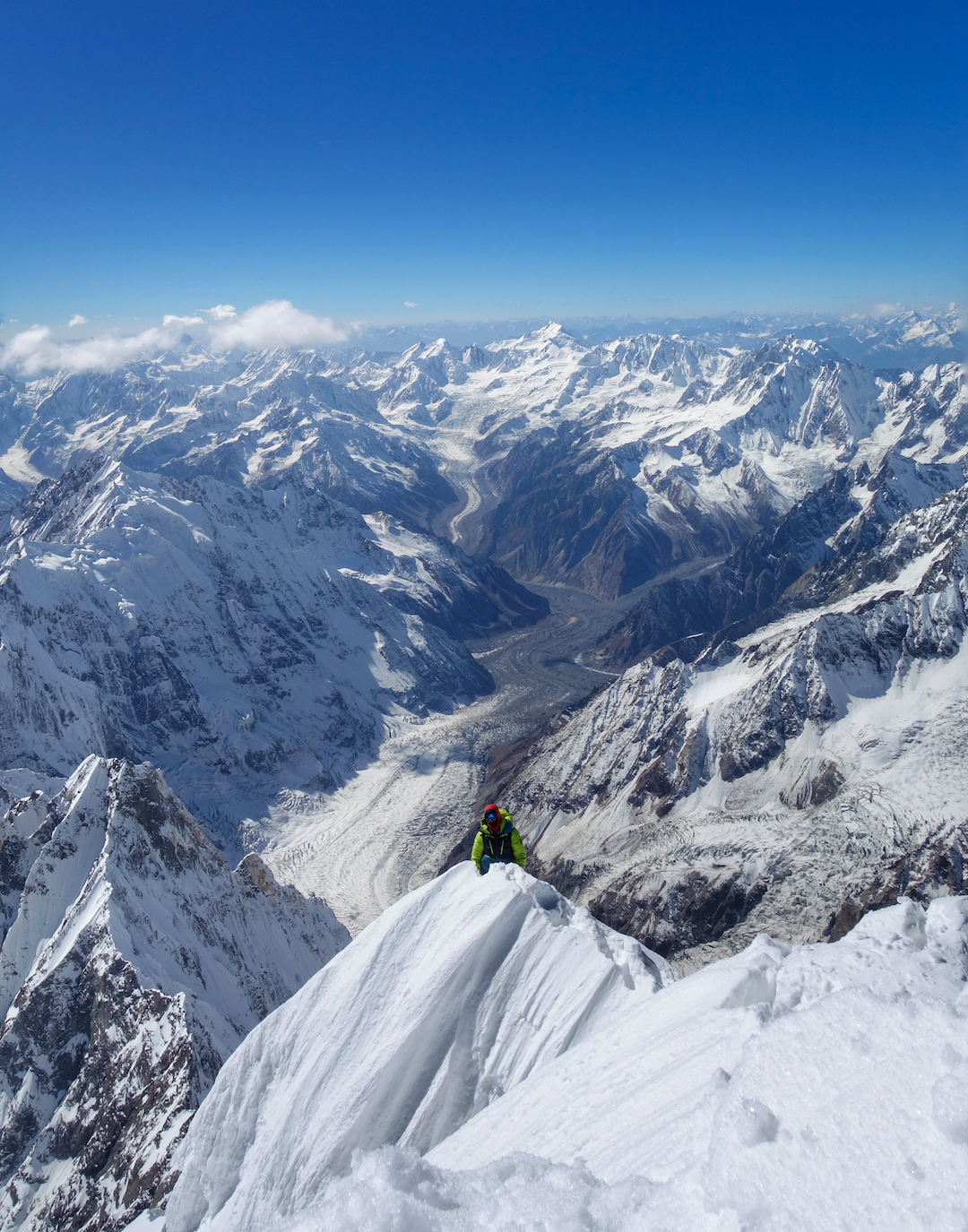 We had hoped to go to Nepal in the fall, but the pandemic decided otherwise. Pierrick Fine and I were forced to modify our plans just two weeks before our departure. The choices were limited—the only country that opened its doors to us was Pakistan.

Once the destination was confirmed, we had to find a new goal very quickly. We were looking for a peak of around 7,000 meters to reinforce our high-altitude experience. With great help from Fatmap and Google Earth, our eyes finally turned toward Sani Pakkush, which rises to 6,953 meters. The summit had only been reached once, in 1991, by a German team who climbed the upper north ridge above Tilman’s Col, approaching from the west; the rocky west buttress of the mountain was attempted in 1998. The south face, 2,500 meters high and very steep, was still virgin.

Sani Pakkush rises near the west end of the long ridgeline formed by the Batura group. The mountain’s south side is accessed by the Toltar Glacier, which branches to the north near the snout of the Baltar Glacier. It is unclear if any previous climbing expedition had ventured to the head of the Toltar, though locals certainly have. Even more than usual, we set out on this adventure with a lot of uncertainties!

Ours was one of the few international expeditions to the Karakoram last fall. In addition to COVID-19, this is also explained by the fact that autumn weather in the Karakoram is nowhere near as stable as in Nepal. The temperature is too low and the faces too snowy for rock climbing. However, we felt the south face of Sani Pakkush might offer great possibilities for mixed climbing.

As it turned out, the month of September was particularly rich in precipitation in the Karakoram, and in October the weather became milder. Thus, the mixed and ice conditions were very interesting.

The approach up the Toltar Glacier took two days; crossing the glacier to reach our base camp site was tricky with our porters. We arrived on September 26 and established a campsite on dry ground at around 4,100 meters. Almost all the mountains around us were unclimbed, offering amazing potential for future expeditions.

Once at BC, we were stuck in our tents for a few days, watching the snowflakes come down. After all the effort to get here, we were quite disappointed to see such bad weather, and these days were really hard to bear. It’s not like we hadn’t been warned: Everyone had told us you can’t climb big mountains in Pakistan in October!

With all the tent time, it was comforting to think back on the experiences that had led the two of us to this remote glacier in the Karakoram. After some successful studies in science, Pierrick had decided as a teenager that he preferred ice axes to pencils and calculators and had devoted himself to the mountains. He was a member of the French ice climbing team, traveling the World Cup circuit for a few years and achieving some great results. After that, he applied his skills to the real mountains with some good ascents in the Alps. In 2019, we traveled to Pakistan together with two other climbers and completed the first ascent of a nearly 6,000-meter mountain in the Hindu Raj, near the border with Afghanistan, at the head of the wild and unknown Risht Glacier.

On my side, nothing had predestined me to alpinism. A former indoor climbing competitor, I went quite late to the mountains, as I was born and raised in the city of Metz, in the flat northeast of France. It was only after moving across the country to finish my meteorological studies at an engineering school in Toulouse that I discovered alpinism in the nearby Pyrenees. After school, I moved to the Alps and devoted myself almost full-time to the mountains. Now I split my time between meteorological engineering, mountain guiding, and climbing. Pierrick and I are only in our mid-20s, but we’ve both developed a deep love for the expedition life.

Meanwhile, at our campsite by the Toltar Glacier, the sun had finally appeared. The battle was now on.

It was difficult to find technically easy terrain on which to acclimatize—all the faces surrounding us were really steep. But we managed to climb to about 5,500 meters on snow slopes, spending one night at our high point. After five days of acclimatization, we returned to base camp, hoping this would be enough to go up to nearly 7,000 meters on technical terrain. At least we managed to do some good hangboard sessions at base camp.

Back home in France, we had envisioned a steep line in the center of the broad south face of Sani Pakkush, where massive rock buttresses are split by complex, twisting couloirs. But given the weather conditions and the ambient cold, our only option was snow and mixed climbing, not rock, and the left side of the face held the most obvious line. We spent the days of acclimatization observing this side of the wall for objective hazards and planning how to avoid them. In the end, we followed exactly the line we imagined from base camp—only the bivouacs were in different spots than we expected.

After two weeks we felt ready to go, but poor weather made us wait a few days more. The upcoming forecast was good, however: The sun was expected to shine for almost a week, which would give us a proper try on the face.

We left base camp at 2 a.m. on October 16 and met the first difficulties at the very bottom of the face, at 5,000 meters, with some sustained ice pitches. Big avalanches were rolling down the face, and we nearly got caught in one. On the very first pitch, a spindrift avalanche smashed into my pack as I was leading, cutting a big hole in the fabric. Luckily, we managed to find a safer line to avoid the slides. We repaired the pack as best we could, but we could no longer carry heavy loads in it.

Some easier terrain on snow and mixed followed. At around 5,600 meters, we completed one of the hardest pitches (M4+/M5) and found a little platform for an uncomfortable bivy. It was impossible to find a good spot for our tent, and we could only use one of the poles to put it up. It was not a restful night.

On the second day we managed to get high on the face, passing through the rock band at around 5,800 meters that was obviously going to be one of the hardest parts of the climb. The rock band is vertical to overhanging, but two awesome pitches of ice broke right through the middle. For me, this was the best moment of the ascent, with dreamy ice conditions.

At around 3 p.m., at 6,200 meters, we began another desperate search for a bivy site. After hours of looking, we could only sit and wait for morning, one of us on a small snow ledge and the other sitting in the tent, which was hanging from the belay anchor like a hammock.

After two bad bivies, we were really exhausted. We were happy the face got sun early, because the nights had been very cold, dropping below -20°C (-4°F). We decided to climb only to the summit ridge that day and to find a spot to stop as early as possible. At an altitude of 6,400 meters, we located a nice, comfortable crevasse in which to put up the tent and have a proper rest.

Early on October 19, we started for the summit. We left our tent and extra gear at the crevasse bivy and slowly climbed the last 500 meters on the snowy southwest ridge. The snow constantly changed in consistency, and sometimes we had to dig through deep powder. It became harder and harder to continue. In such moments, you understand how significant it is to climb with the right person. Pierrick and I have different skills, and that was one of the keys to our success. I led the technical pitches, but for sure he was the master above 6,500 meters, getting stronger and stronger as the altitude increased. Leaving for a big and committing expedition with only one teammate is risky, but when everything goes right, it creates a very special bond. “L’esprit de cordée,” as we say in French, the partnership between two friends linked by a rope.

After seven hours of hard work, we arrived on top at 2 p.m., completely exhausted. We descended to our camp at 6,400 meters and spent another night there, relaxing before the long descent to base camp. We spent our last day on the mountain going back down the same route we had climbed, alter- nating between rappelling (20 to 25 rappels) and downclimbing. Late in the afternoon of October 20, we made it safely back to base camp, empty of all energy but with lots of emotion in our minds.

We called our route Revers Gagnant, a name that translates somewhat poorly in English as “winning setback.” It refers to the fact that we played against all odds by going to Pakistan without much notice and at a season supposed to be bad for alpinism. As a result, we had the chance to discover a completely wild place and stunning mountains.

During all that time I spent on Google Earth and Fatmap, looking for virgin mountains and steep walls, I was amazed to see so many interesting places and objectives in the Himalaya and especially in northern Pakistan. This was my third time in Pakistan and eighth expedition in all, and the discovery of new places and new people remains fascinating to me. The search for unclimbed steep faces at higher altitudes is now my main goal. The potential is still gigantic.

Summary: First ascent of the south face and upper southwest ridge of Sani Pakkush (6,953 meters) in the Batura Muztagh of Pakistan, by Pierrick Fine and Symon Welfringer (France), October 16–20, 2020. Their route is called Revers Gagnant (2,500m, WI4+ M4+ 90°). This was the second ascent of the mountain.

About the Author: Symon Welfringer lives in Grenoble, France. He thanks North Pakistan Adventure and Ishaq Ali for organizing this expedition. 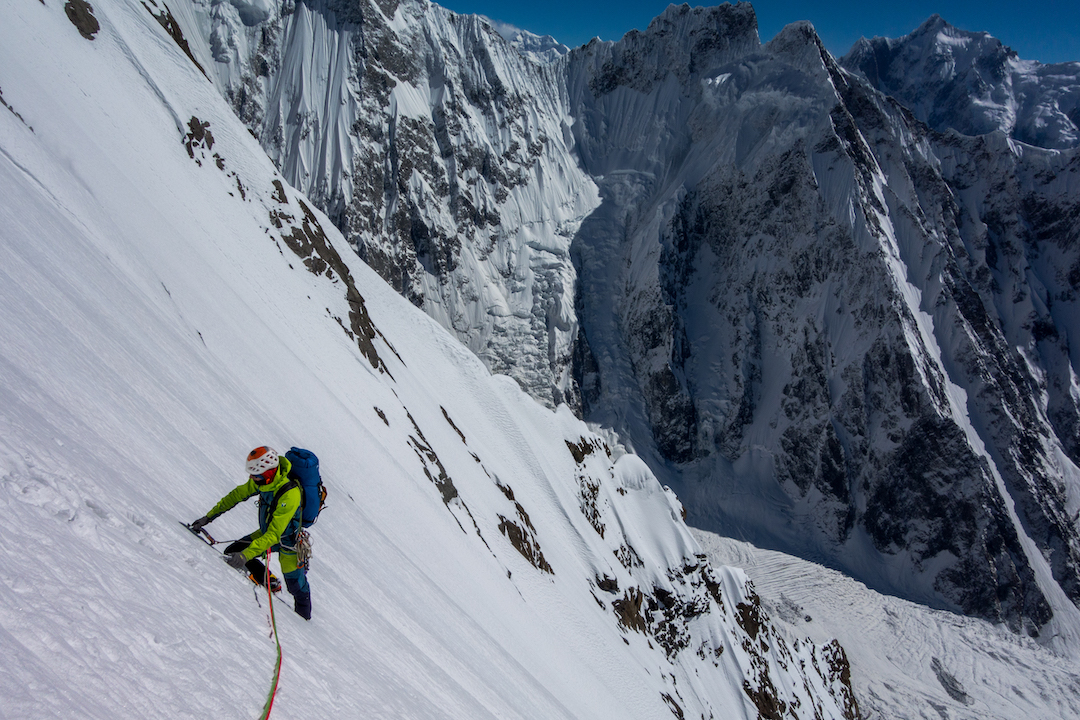 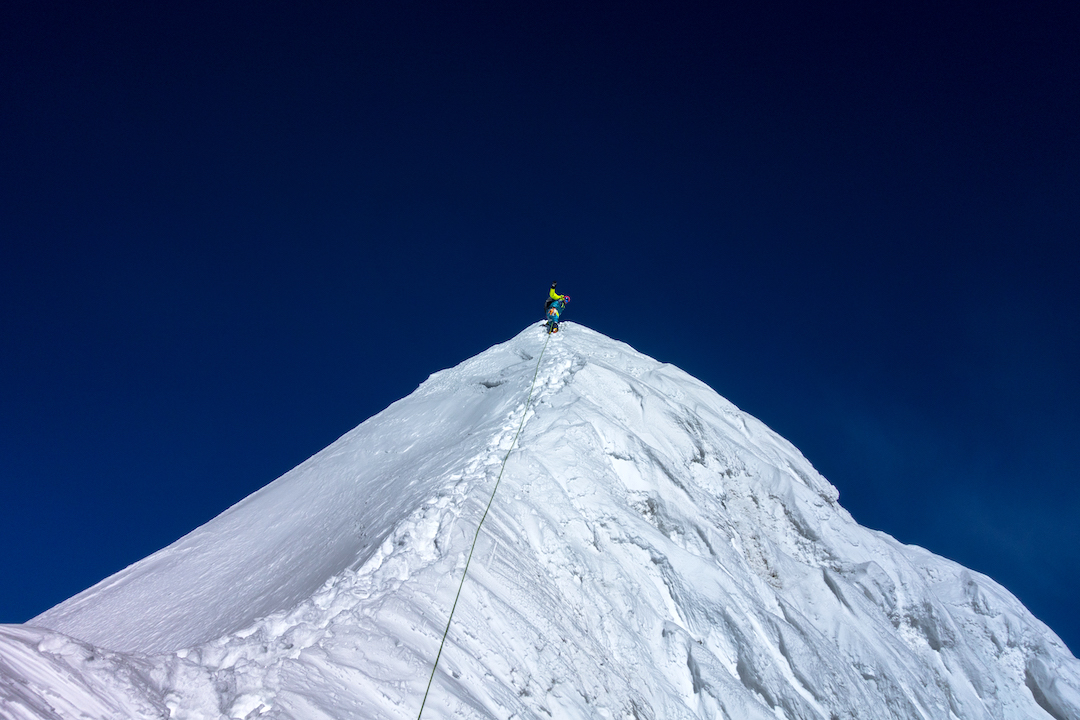 Nearing the summit on Sani Pakkush (6,953 meters) after the first ascent of the south face.
Symon Welfringer / Pierrick Fine 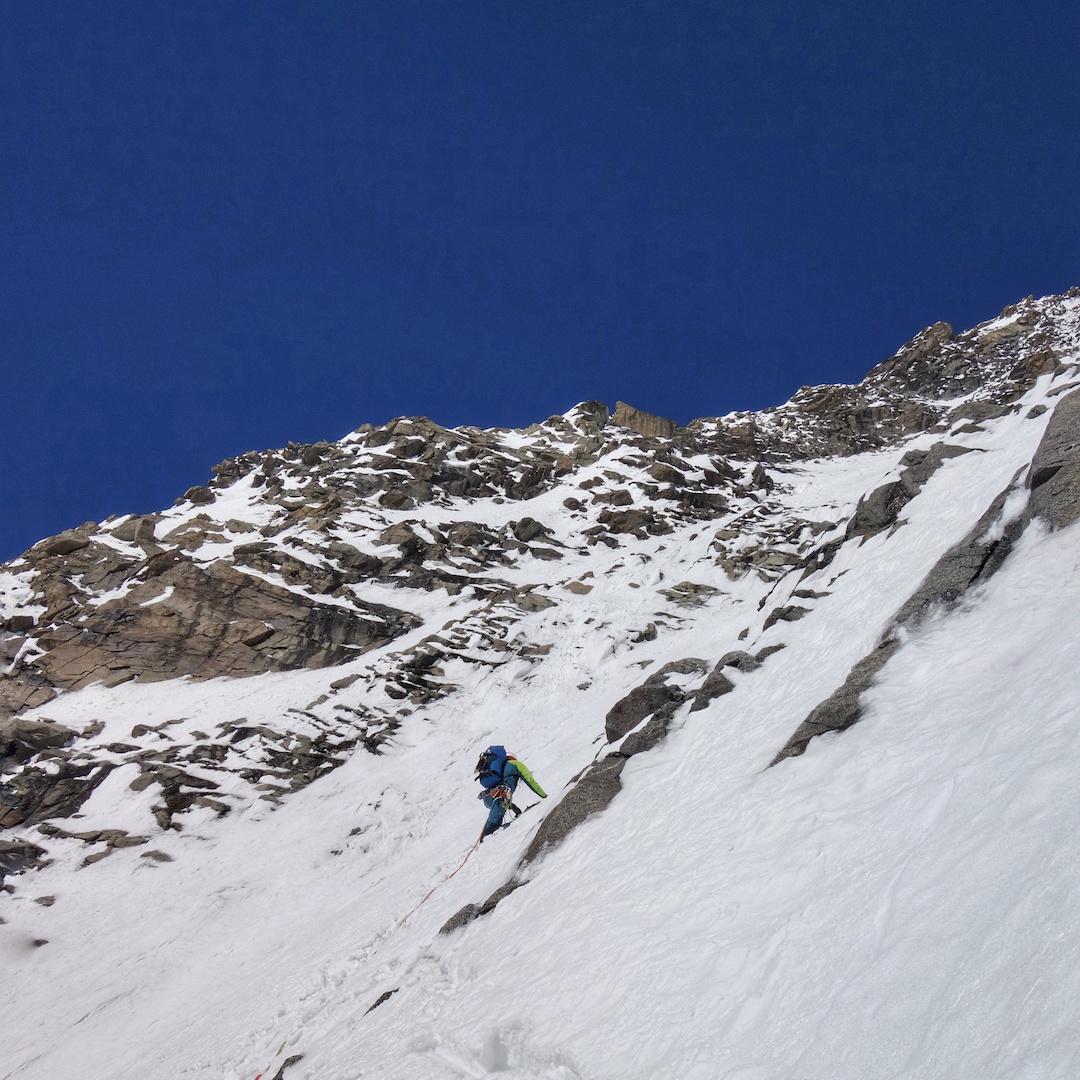 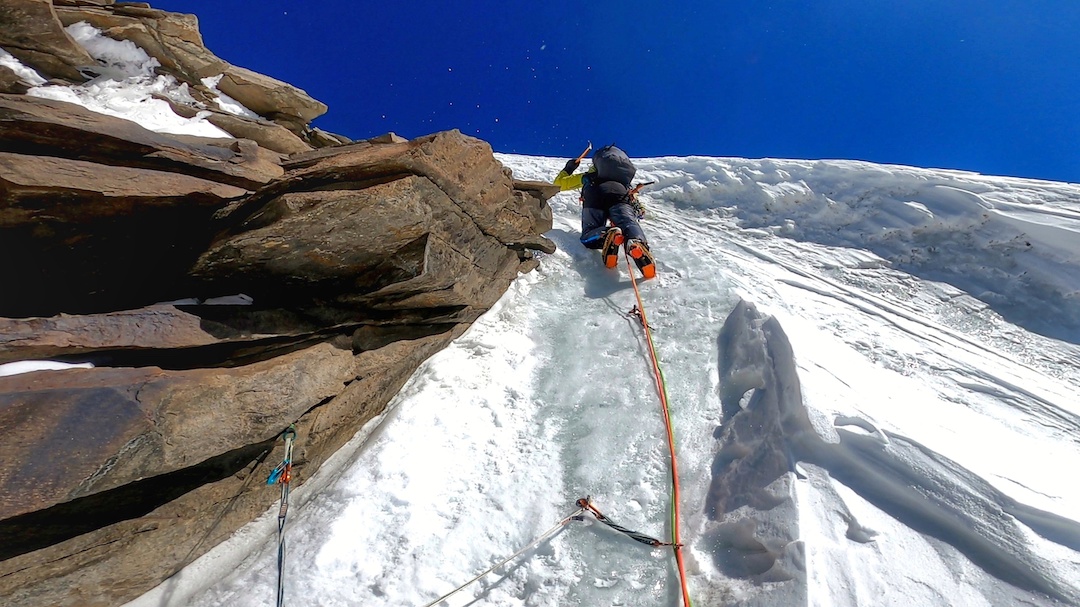 Pierrick Fine follows a strip of good ice past a rock band at around 5,800 meters.
Symon Welfringer 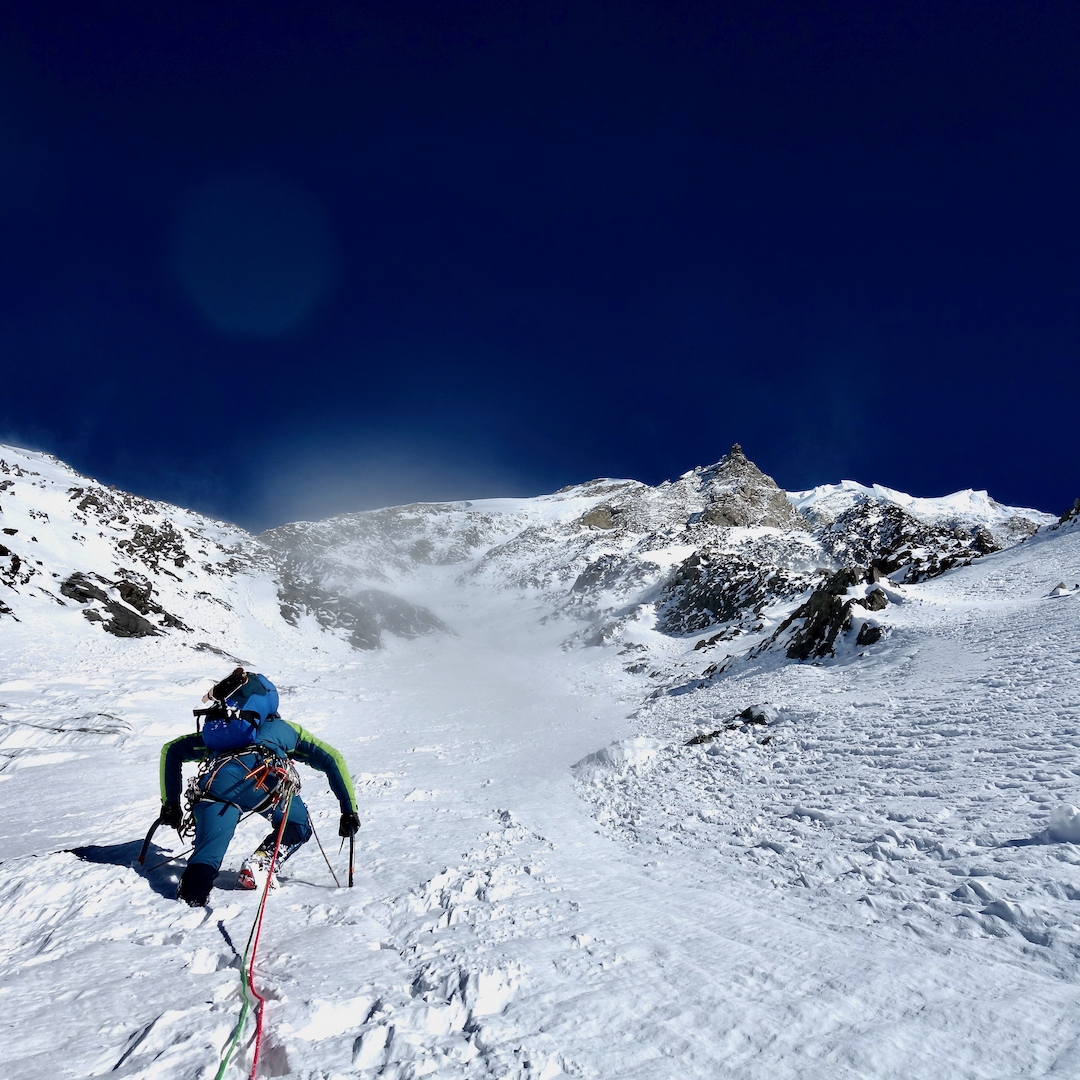 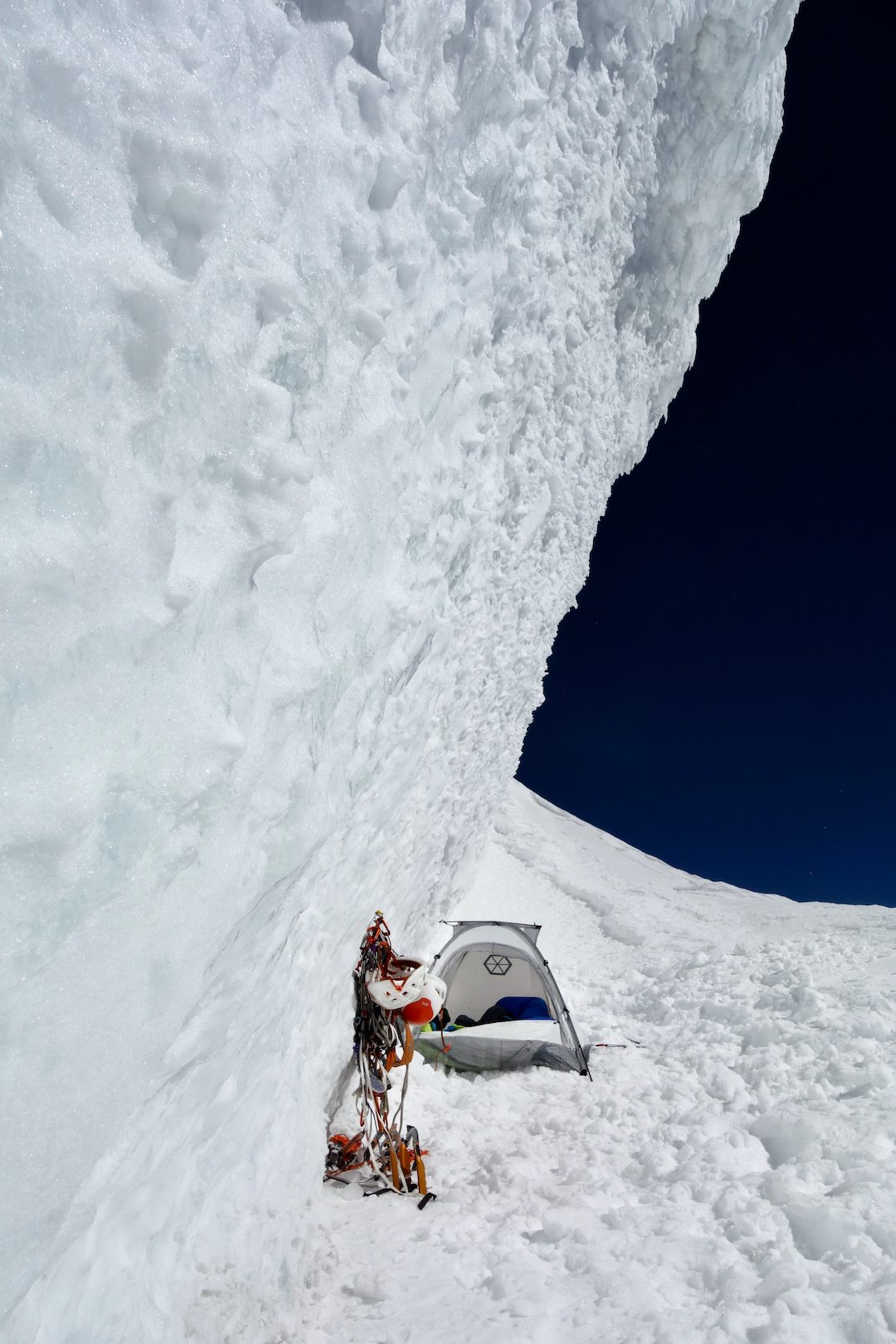 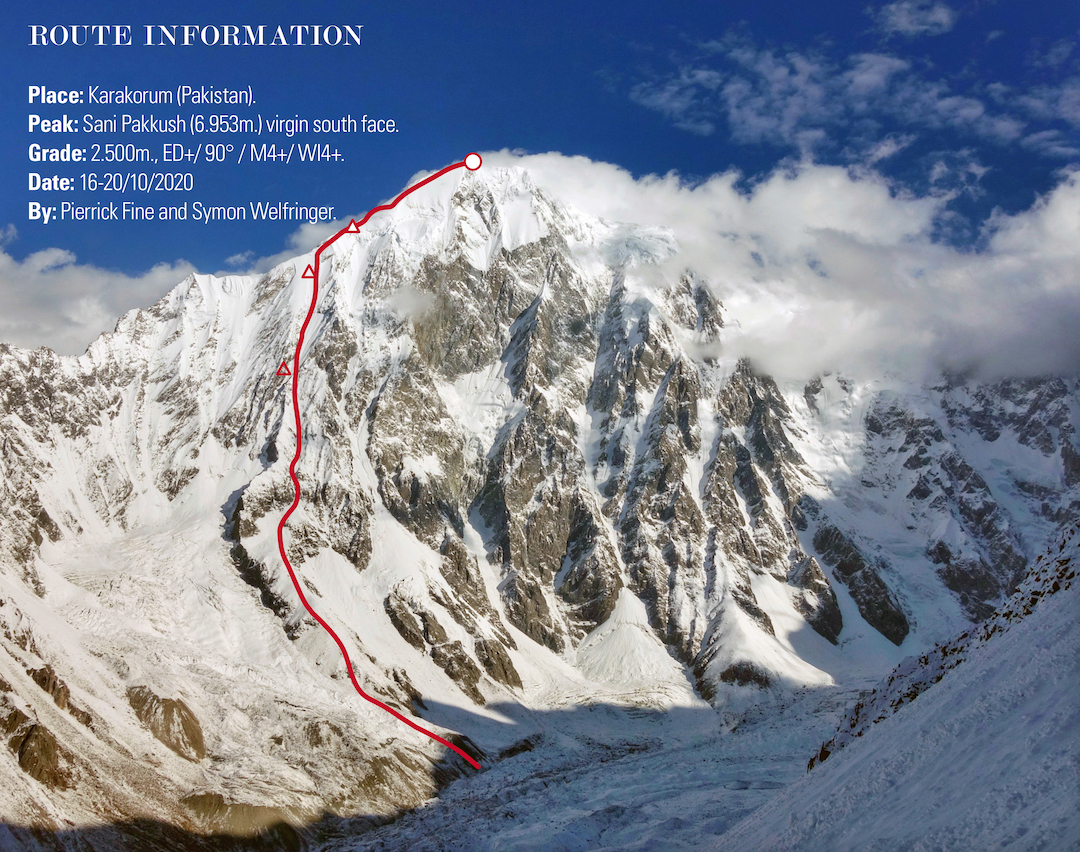 Sani Pakkush (6,953 meters) showing the 2020 route up the south face and upper southwest ridge. The climbers spent a second night at their high camp before descending the route.
Symon Welfringer
Previous Next

Nearing the summit on Sani Pakkush (6,953 meters) after the first ascent of the south face.
Symon Welfringer / Pierrick Fine

Pierrick Fine follows a strip of good ice past a rock band at around 5,800 meters.
Symon Welfringer

Sani Pakkush (6,953 meters) showing the 2020 route up the south face and upper southwest ridge. The climbers spent a second night at their high camp before descending the route.
Symon Welfringer
Previous Next