Ushba: A New Route by a New Generation on the Northwest Face 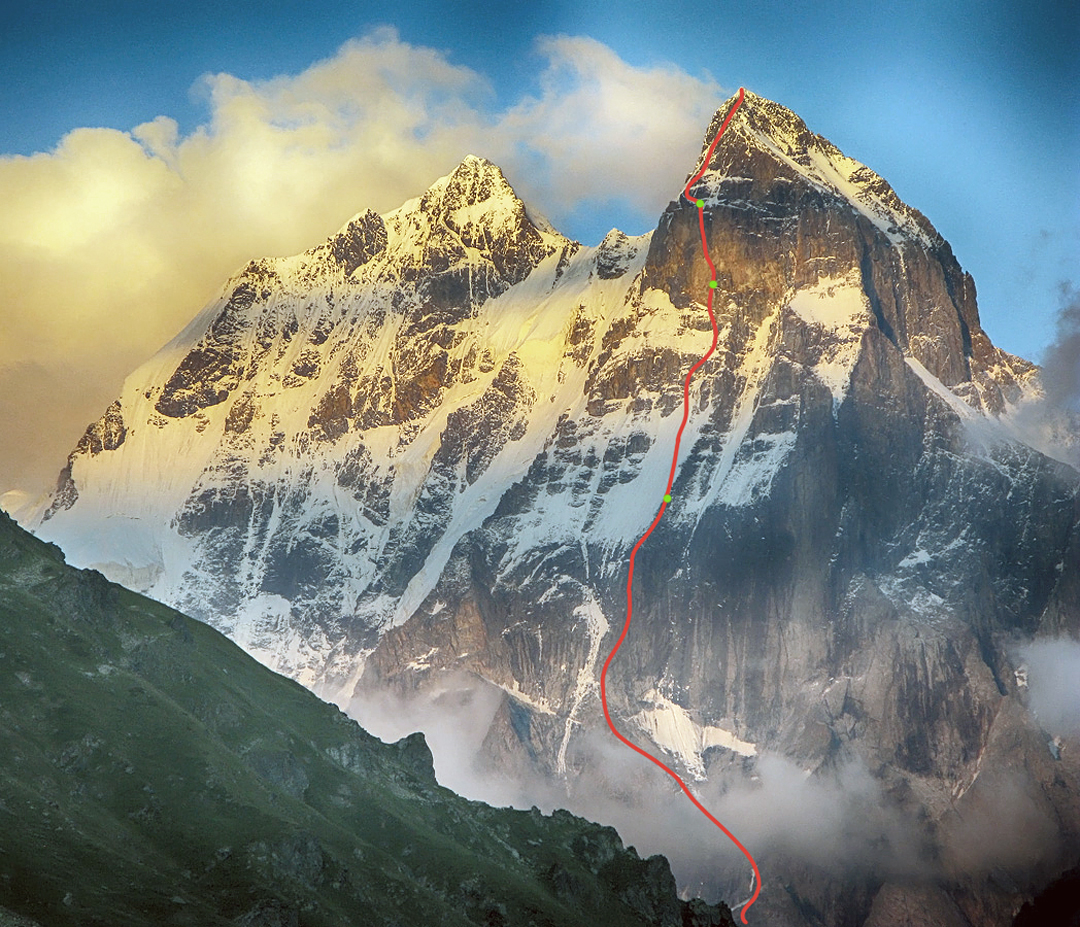 Climbing a new line up the most iconic peak of the Caucasus—Ushba (south peak, 4,710m; north, 4,690m)—is a dream for many alpinists. The mountain is famous for being harsh, complex, and dangerous. I remember moments as a teenager cautiously searching for “my line” on this magic mountain, but every logical route on all six faces of this double-summited peak appeared to have been climbed. Giorgi Tepnadze and I wanted a new, bold line, climbed in a lightweight style, which would test our longtime friendship and team experience.

In 1946, Georgians made the first ascent of the northwest face of Ushba South, but 25 years were to pass before the large upper wall—the Rockband—barring access to the summit, was finally breached. The 1971 Artsishevskiy Route (6A) climbed a corner on the left, while the 1972 Grigorenko-Prigoda Route (6A) took a corner on the right. Both teams spent two weeks, using siege style, to complete their routes, and since then there have been only a handful of ascents (AAJ 2017).

We aimed to climb the center of the Rockband, beginning at around 4,200m. This area is gently overhanging and very compact; melting snow from above drops like a waterfall over the wall, fortunately not touching our proposed line. We planned to go fast and light, with the flexibility of switching to big-wall style on the Rockband.

Our preparation was intense. Starting in June we climbed in the Chaukhi Range and the Tetnuldi group, then the 1962 Mishlyaev Route (1,700m, 5B/6A) on Ushba South, and finally a new route on Ailama (see report here).

After a 15km hike on September 9, at midnight we started approaching the face via a glacier labyrinth and many moderate pitches of unroped climbing up a rocky spur to gain the Georgian Shelf. Crossing this early in the morning, when it was free from the threat of falling ice, we then roped up and began simul-climbing, then pitching, up the lower northwest pillar. In the afternoon we stopped at a small ledge.

On the morning of the 11th, we started up new ground, climbing a dozen pitches of cold ice up a large icefield. Above, we reached the base of the Rockband via mixed terrain and several tricky sections with powerful pull-ups. The first two pitches on the headwall were crumbling granite, leading to the start of the really steep climbing. While belaying, I melted snow to give us each four liters of water for the coming days. A tough pitch brought us to the only ledge on the wall, and we settled into our second bivouac on this tiny stance.

The next day we climbed two overhanging pitches, and the higher we progressed the harder it became. Following this section on the rope involved much spinning and big swings. Free climbing was no longer possible. Without a portaledge it would be impossible to sleep higher on the headwall, and we weren’t sure of the line to take. The situation rapidly became clear: We either had to bail—just 300m below the summit—or commit to climbing throughout the day and night until we reached a place where we could at least sit. The weather was cold and stable, but soon our water would be finished.

We spent a second night on the tiny ledge, and on the 13th jumared our rope and pushed hard for the top. As the sun was setting, I was below a roof, experiencing a section of loose rock, maybe one pitch shy of the top of the wall. At this point I fell, taking a lump of fractured granite and three pieces of protection with me. Much of our equipment was now wearing out or had already broken. When the night wind started to howl, Giorgi took the lead, and I began to sing to provide us with encouragement.

As he searched for an exit on brittle ice, Giorgi’s ancient talisman—a short Cassin ice hammer—broke, and with almost no protection he made a bold lead of the last few meters of difficult icy rock. At 1 a.m. on the 14th, I heard his jubilant shout from the top of the wall.

We built a ledge, rehydrated, napped for a few hours, and woke tired but in exceptional spirits. After a few hours on moderate but extremely loose new ground, we reached the top. One hour of calmness, enjoying a clear sky and the surrounding mountains, restored our strength. We got off the mountain the same day (our fifth) by making an eight-hour descent of the 1937 Gabriel Khergiani Route (5A/5B) on the southeast face, reaching Becho village at midnight. Our 1,700m new route was graded 6A/6B UIAA VI/VII A4.

Editor's Note: A comprehensive survey of Ushba's geography, routes, and climbing history will appear in AAJ 2022. 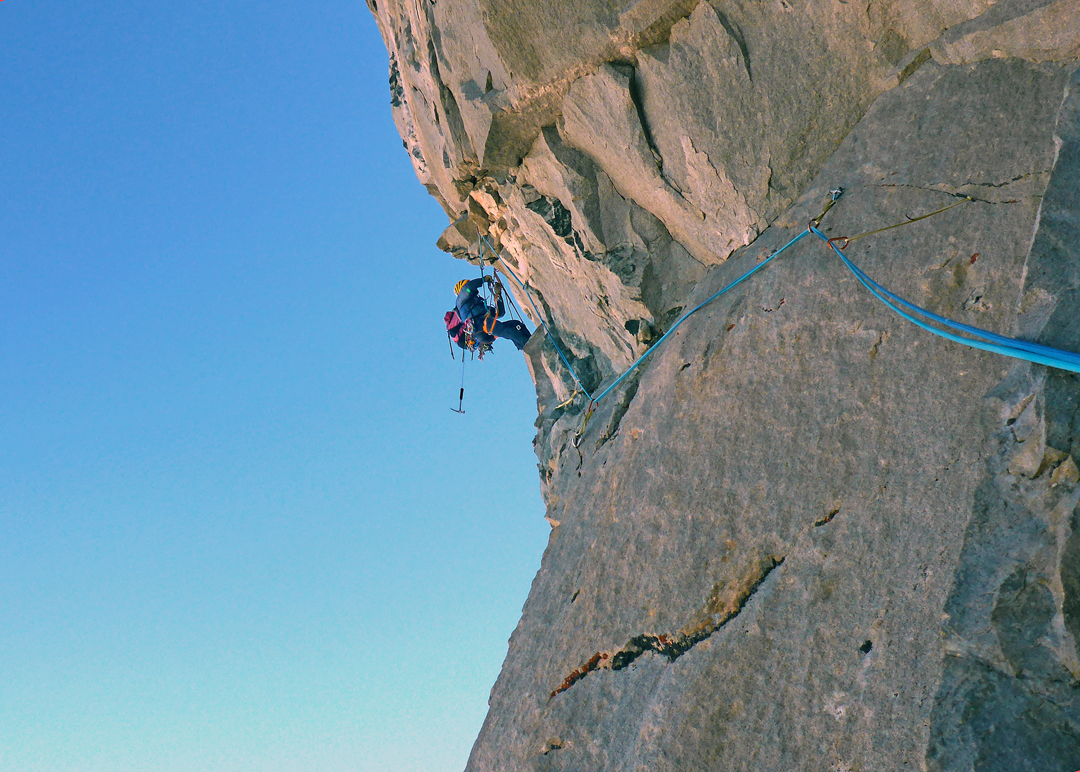 Giorgi Tepnadze on the first overhanging pitch of the Rockband, day three on the 2020 route.
Archil Badriashvili 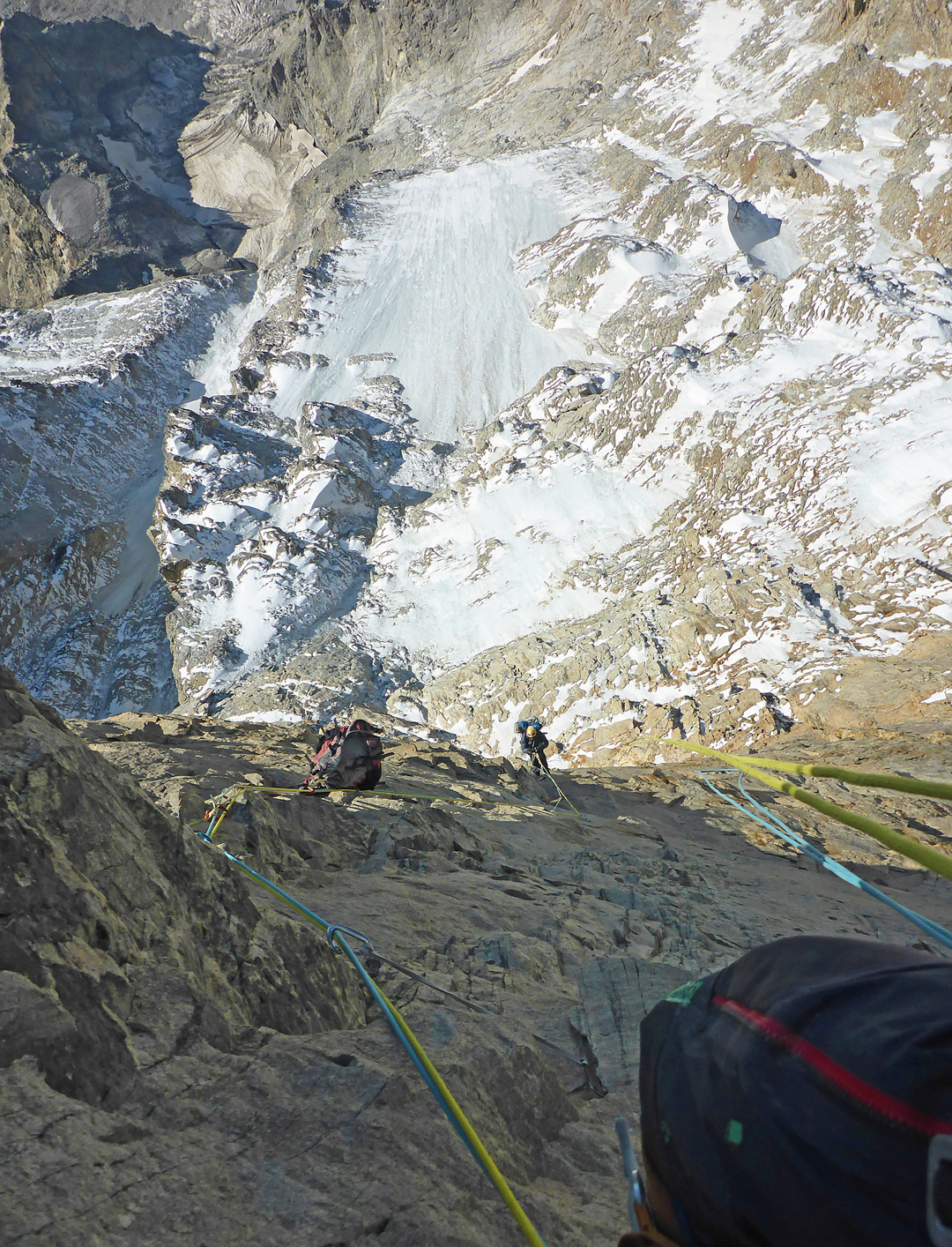 Giorgi Tepnadze follows a pitch on the Rockband. The middle icefield of the route is visible below.
Archil Badriashvili 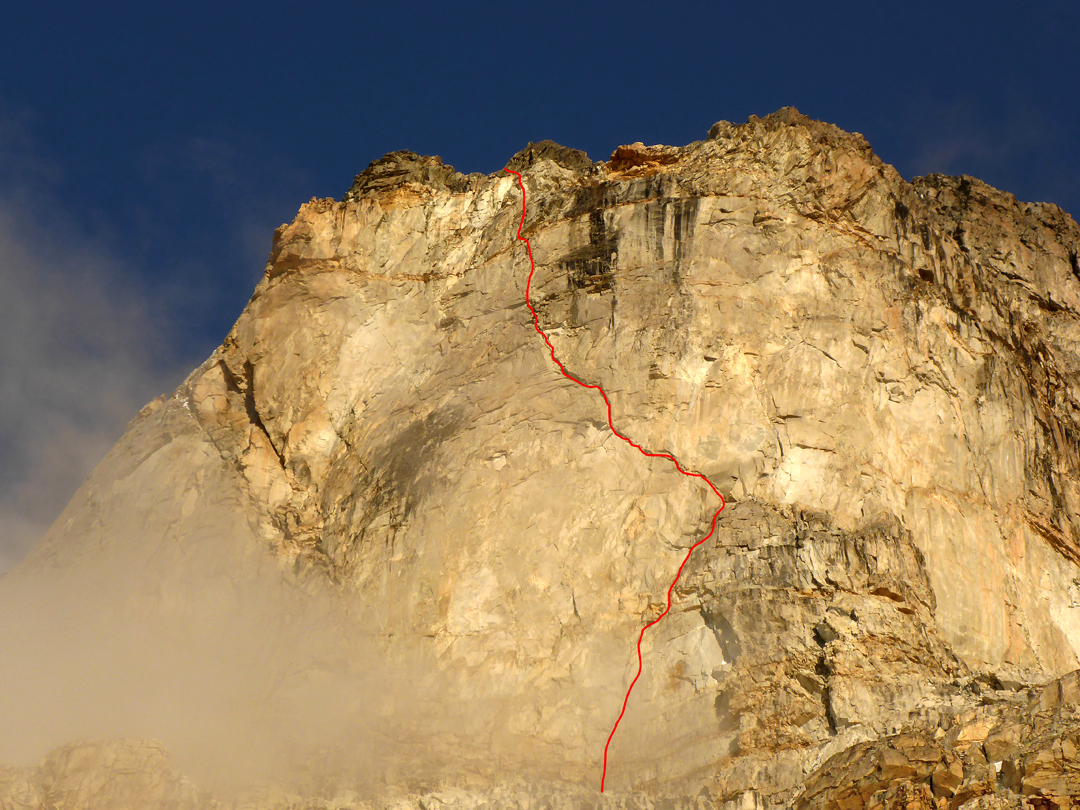 The upper rock barrier and crux of the new Georgian Route on the northwest face of Ushba South.
Archil Badriashvili

Ushba from the west, showing the upper northwest face and the line of the 2020 Georgian route with bivouac sites. The climbers spent two nights at the second bivy site.
Supplied by Archil Badriashvili 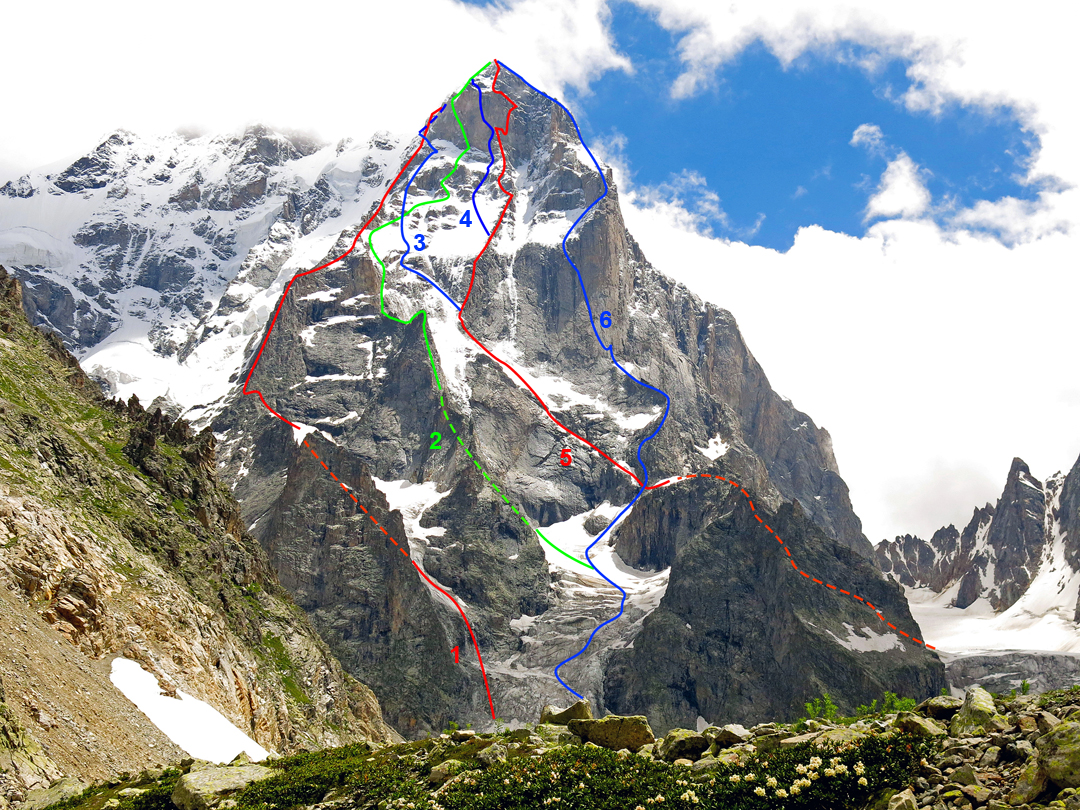 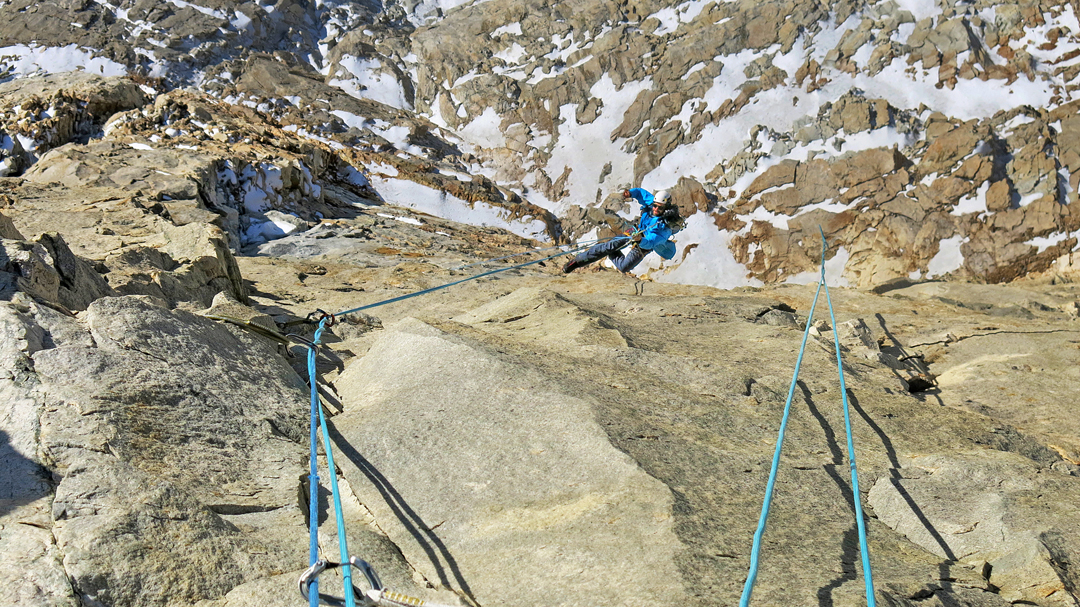 Giorgi Tepnadze on the first overhanging pitch of the Rockband, day three on the 2020 route.
Archil Badriashvili

Giorgi Tepnadze follows a pitch on the Rockband. The middle icefield of the route is visible below.
Archil Badriashvili

The upper rock barrier and crux of the new Georgian Route on the northwest face of Ushba South.
Archil Badriashvili

Ushba from the west, showing the upper northwest face and the line of the 2020 Georgian route with bivouac sites. The climbers spent two nights at the second bivy site.
Supplied by Archil Badriashvili