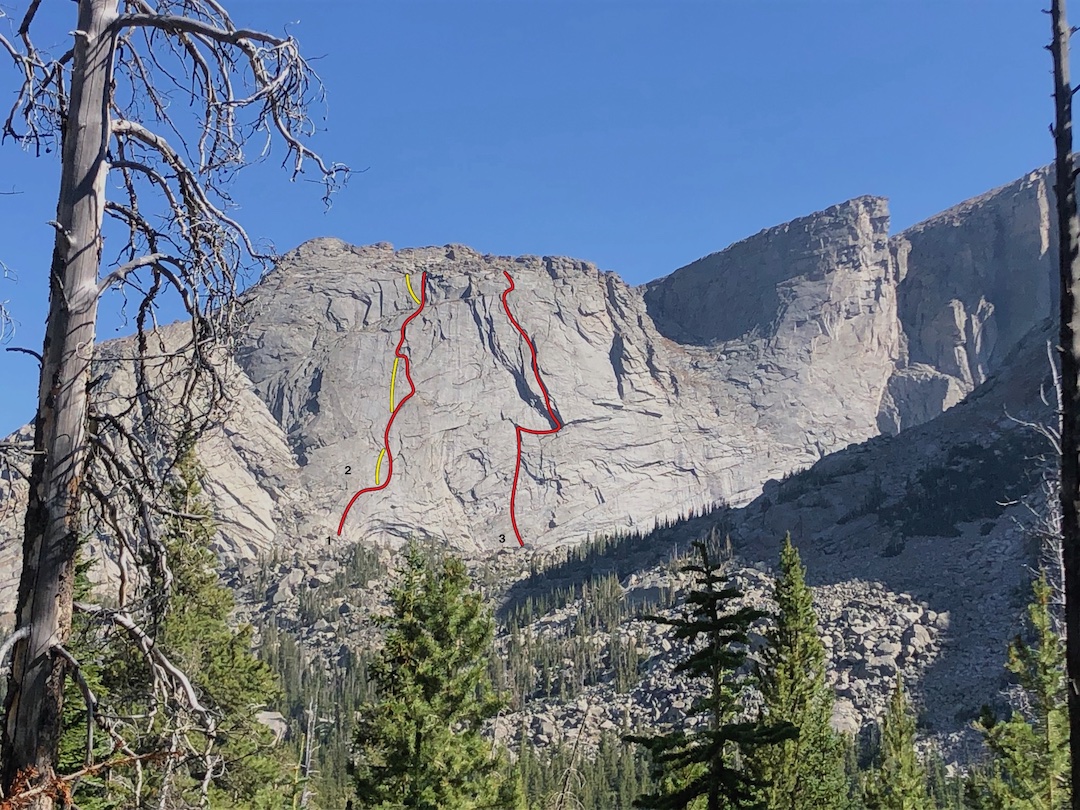 Relative to other areas in the Winds, the Cirque of the Moon has seen few climbing parties since the first recorded routes were established in 1978. We were drawn to the promise of seclusion and opportunity to attempt the first free ascent of one of the newer routes, Space Ghost (5.10+ C1, Ferro-Hughes, 2016; see AAJ 2017).

On July 25, Lane Mathis, Rob Pizem, and I hiked from Dickinson Park and set up camp in the forest below the cirque. The next day we climbed Space Ghost, with the follower trundling some leftover loose rock. I aided through the crux, brushing it a bit as I went. Rob freed it on the follow at around 5.12-, and we topped out to enjoy a shiver bivy on the rim. The next morning Rob hiked out, leaving us with his extra food. During days three and four it rained pretty consistently and we spent the time tending a fire and wrestling a steep boulder near camp that we called the Mansion.

By the time the rain stopped, half of our trip was spent. Lane and I decided to shift our focus to the unnamed, low-angle wall looker's left of the Sunset Buttress. We began referring to this as Sumac Point. The first route we climbed, Chicken Talk (1,100’, 8 pitches, 5.10+), followed obvious dihedrals up the right side of the wall. Although the first 200’ of the route were wet and loose, the rest of the line followed wonderful rock. Most of the day was spent bouncing from corner to corner, laybacking above great protection. 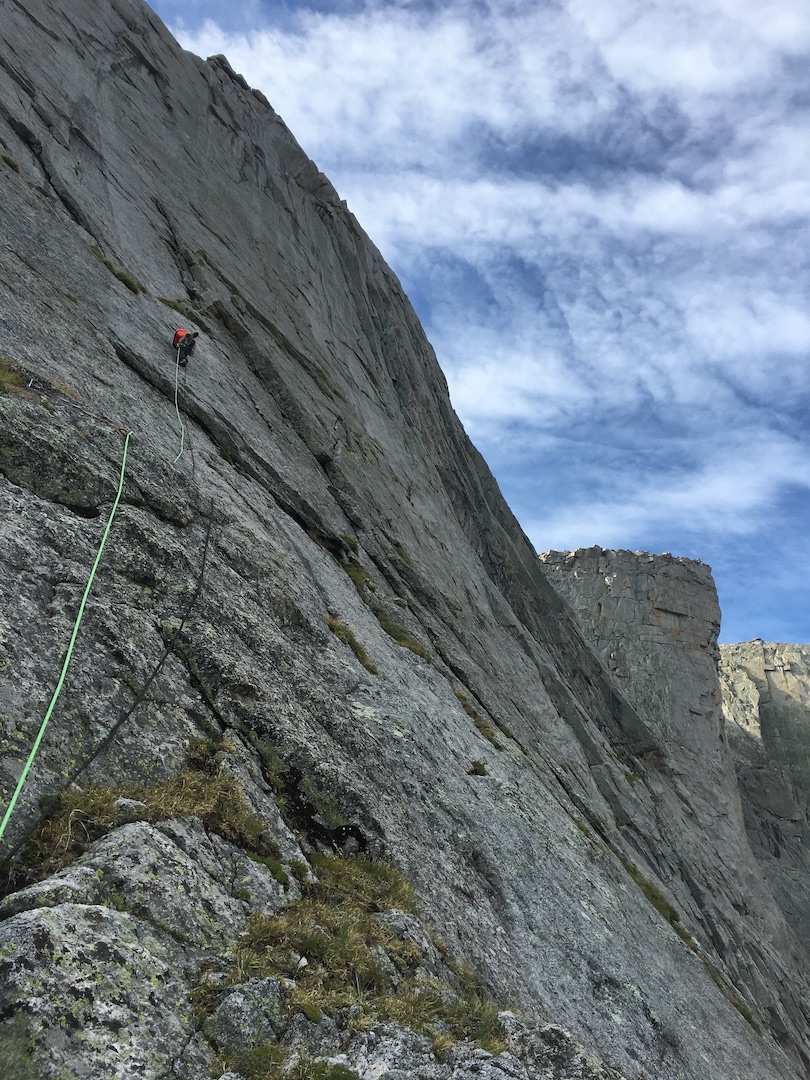 The next route, Forest Creatures (900’, 6 pitches, 5.9 R) began about 100 yards up and left of Chicken Talk, aiming for what looked like many splitter thin-hand cracks. Unfortunately, they all turned out to be flaring seams; however, the low angle and great rock quality allowed for an awesome 82m pitch of run-out face climbing. This quest of a pitch reached cracks on the upper half of the wall that took us to a major ledge just below the summit. From the ledge, many exit pitches were possible—we took the path that looked to protect the best and found a rusted fixed nut just 40’ below the summit. Given the relatively easy, wandering nature of the wall, it’s impossible to say how much our line shared with this previous, unknown ascent. [See the note below for another ascent in 2020 in this same vicinity.]

After hiking back down to the tree line, Lane returned to camp while I ventured back into the cirque to climb a final line on Sumac Point. On the far north end of the west face, I soloed a less than aesthetic line: Bo Mambo (500’, 5.9). Weaving left and right, I chased what looked to be the most enjoyable path to the top; a highlight was a left-angling hand crack on the shoulder of the formation. From the shoulder, a grueling 4th-class hike led back to the summit and the final descent of the trip.

Mountain Critters on Sumac Point: On August 27, with no knowledge of Mathis and Walz's recent ascent, Dave Nettle and Glen Poulsen climbed a similar line on Sumac Point, which they later named Mountain Critters (6 pitches, 5.9). They also began just left of the large eyebrow feature at the base of the wall, taking several face climbing variations and adding some bolt protection to mitigate runouts before taking an independent finish on a long, right-facing flake. Nettle and Poulsen also equipped the line with bolted rappel anchors, likely providing the best descent from the top of the wall. 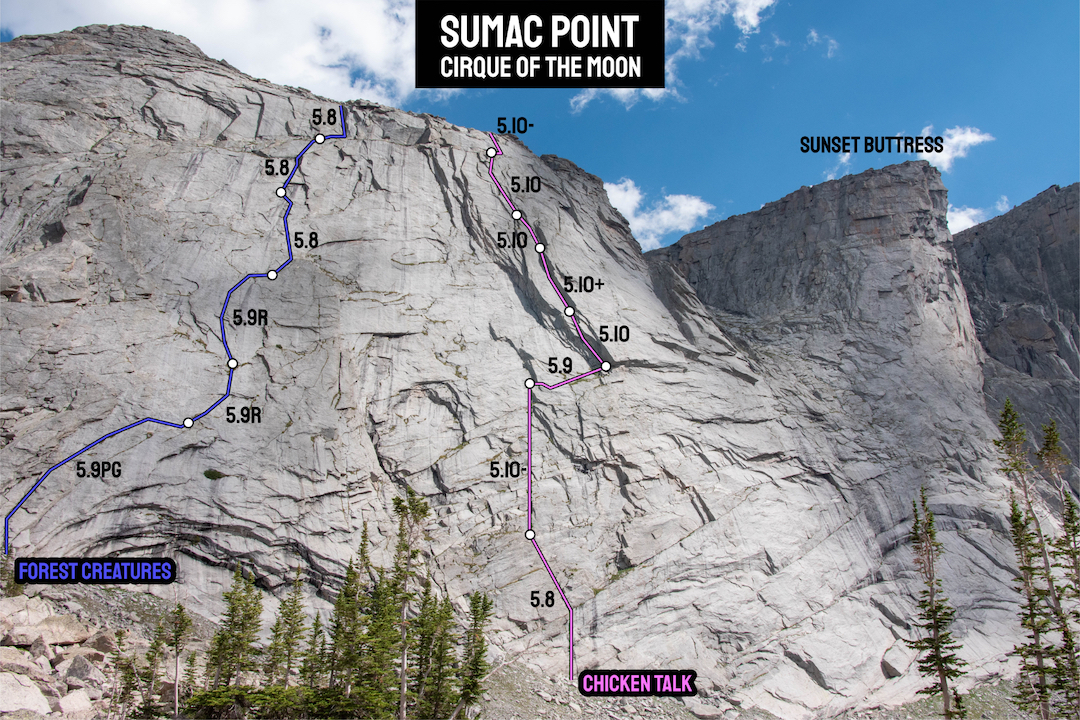 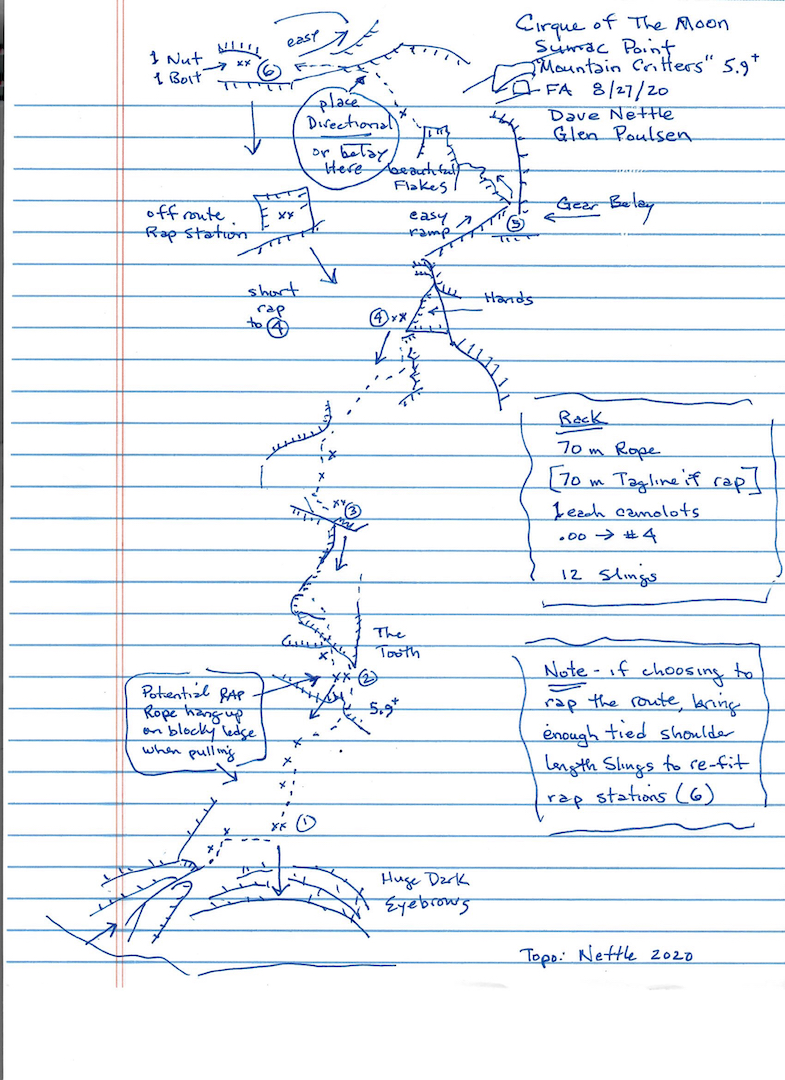 Topo of the route Mountain Critters on Sumac Point, Cirque of the Moon, Wind River Range.
Dave Nettle
Previous Next

Topo of the route Mountain Critters on Sumac Point, Cirque of the Moon, Wind River Range.
Dave Nettle
Previous Next