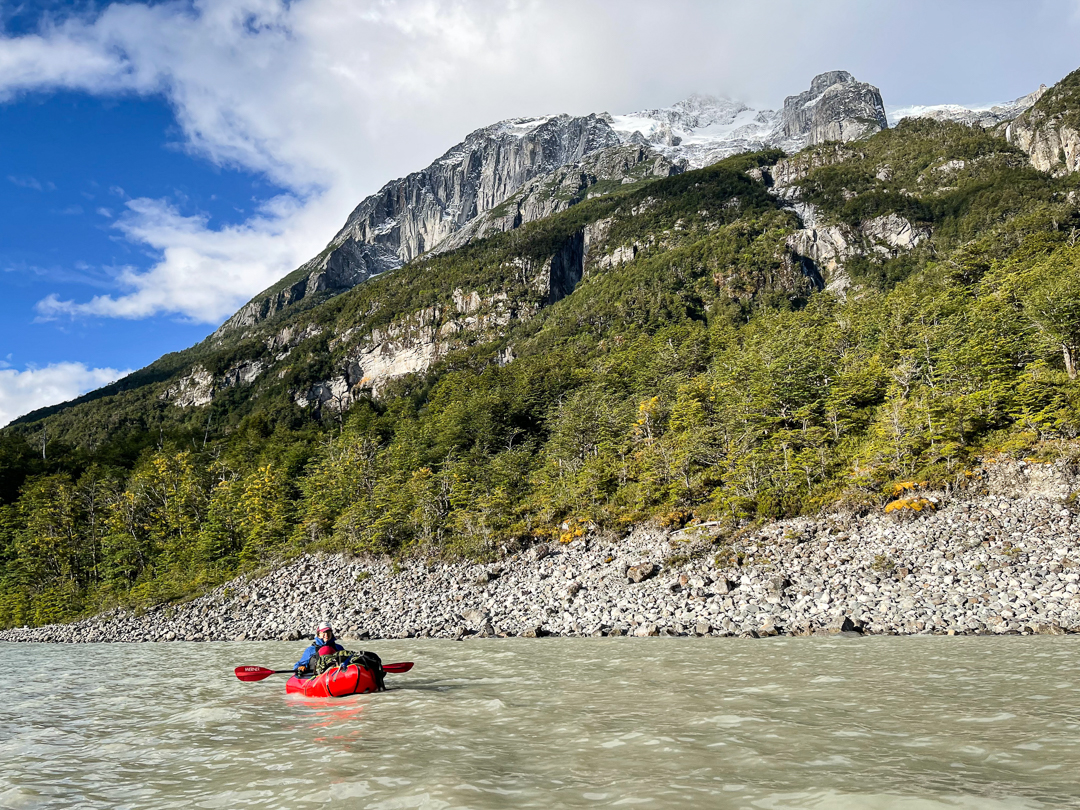 For Isidora Llarena and me, most expeditions begin with talking a partner into a half-baked scheme, later followed by faint guilt for the mishaps that ensue; fortunately, our adventure to Cerro Nora was anything but. Unclimbed Cerro Nora (2,460m; 47°06'43.2"S, 73°24'14.4"W) had caught my eye years ago on a scramble behind a remote ranch where I was co-caretaking. Isi had hoped to attempt the peak on a NOLS course in March 2020, before the COVID-19 pandemic canceled all plans. With each of us hunting around for a climbing partner we could cajole into “Project Nora,” the trip felt like a twist of fate.

Although we’d only spent three days in the mountains together, we blocked out most of our January calendar with “CERRO NORA!” and began creating multi-tab spreadsheets. We learned that we both delight in thorough research and meticulous planning. Down sleeping bag: Worth the risk? For two hot drinks a day, how many fuel canisters do we need?

On January 8, 2021, Isi arrived in Puerto Guadal in a chilly downpour. Laden with camping, mountaineering, and packrafting gear, plus 13 days of food, our packs weighed in at 75 pounds each—daunting but not enough to change our plans. We drove to Valle Colonia the following morning. While we asked for permission to leave our car at Campo Tres Limones, Don Evaristo plied us up with sopapillas, offered theories about the weather, and asked if we planned to die out there. We tried to assure him to the contrary.

We made our way to Lago Colonia on January 10, moving slowly with our heavy packs. Eventually, the rains gave way to fresh snow that stretched down into the trees—our first views of Nora! We napped on the shore and waited for the lake to calm down. We were rewarded with a spectacular evening paddle to the northwest end of the lake, about 7km away. We cached one packraft and hiked northwest toward the Cachet Dos basin, where we used the other packraft to ferry loads (and ourselves) across the river. The Colonia Glacier is extremely broken up and makes for poor travel. We continued along its edge, mostly hiking on moraine but occasionally crossing over to the bare ice. 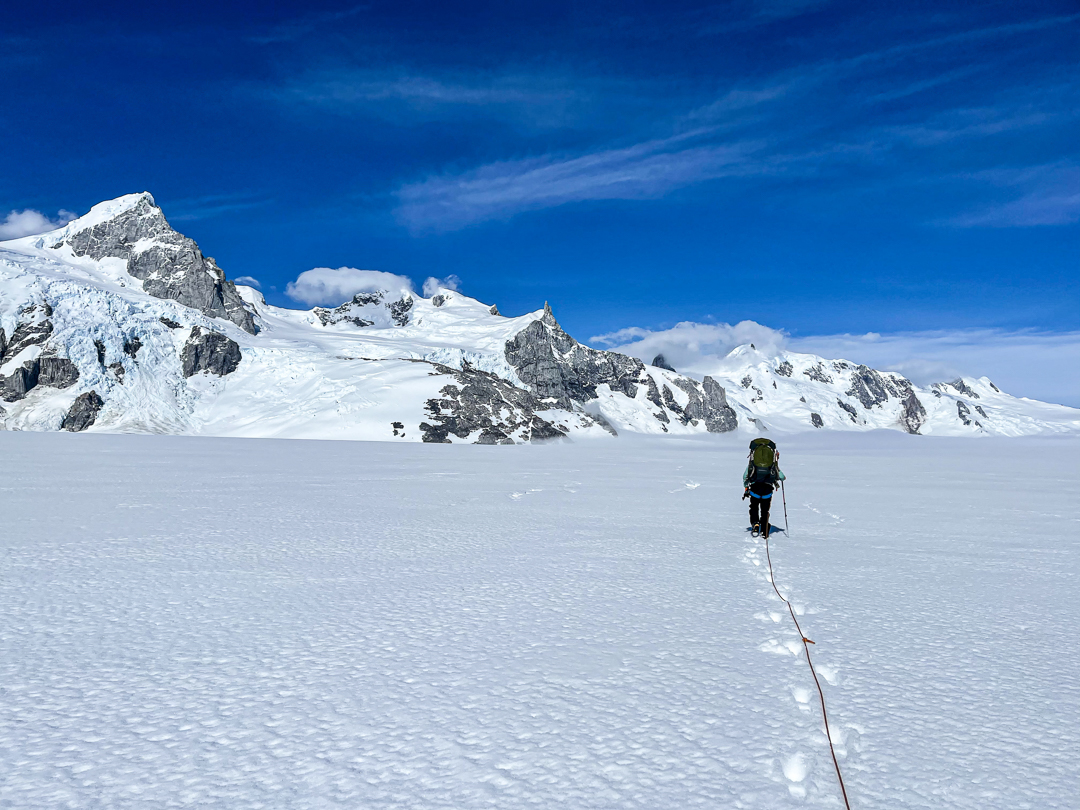 On day three, we hiked northwest into an open valley of meadow and lenga forest and established a base camp. Although the forecast for the next day looked ideal, our planned route to the summit (scrambling north from the lake at the top of the valley to reach the ridgeline, then crossing over a steep subsummit) looked more arduous than expected. Our bodies had taken a beating from long days with heavy packs. After a lazy morning, I set off to scout out an alternative route. Returning that evening, I proposed a crazy idea: Despite an iffy forecast, we should pack up immediately and move camp into the next valley to the west, just to open the faint possibility of summiting the next day. Isi signed on immediately. So, at 8 p.m., we started for our new camp.

We awoke at 4:15 a.m. on the 14th to clear skies and no wind. To access the glacier, we scrambled through cliff bands, waterfalls, and loose scree, some of the trickier terrain of the day. Once on the Nora Glacier, we moved quickly into the firn zone, then roped up to piece our way through steeper sections of crevasses. After three hours, we reached a small cluster of rocks at the start of the expansive summit plateau. While enjoying some snackitos, we looked up at our originally planned route, which would have taken us over the potentially impassable subsummit, and felt grateful for our revised plan.

From there on, we wished for skis as we trudged 3km across the gradually inclined summit plateau. Isi expertly led us through one rollover section with large crevasses and set a steady upward pace. We paused at the base of the steeper summit cone. The bergschrund looked daunting but passable in a few spots; the main face looked steep (55°). The left (southeast) ridgeline caught our eye as exciting but more moderate (45°). Isi let me give it a whirl. We traversed left, gained the ridge, surmounted the bergschrund, and climbed a pitch of alpine ice toward the summit (1,500m from camp, AI2 moderate snow). 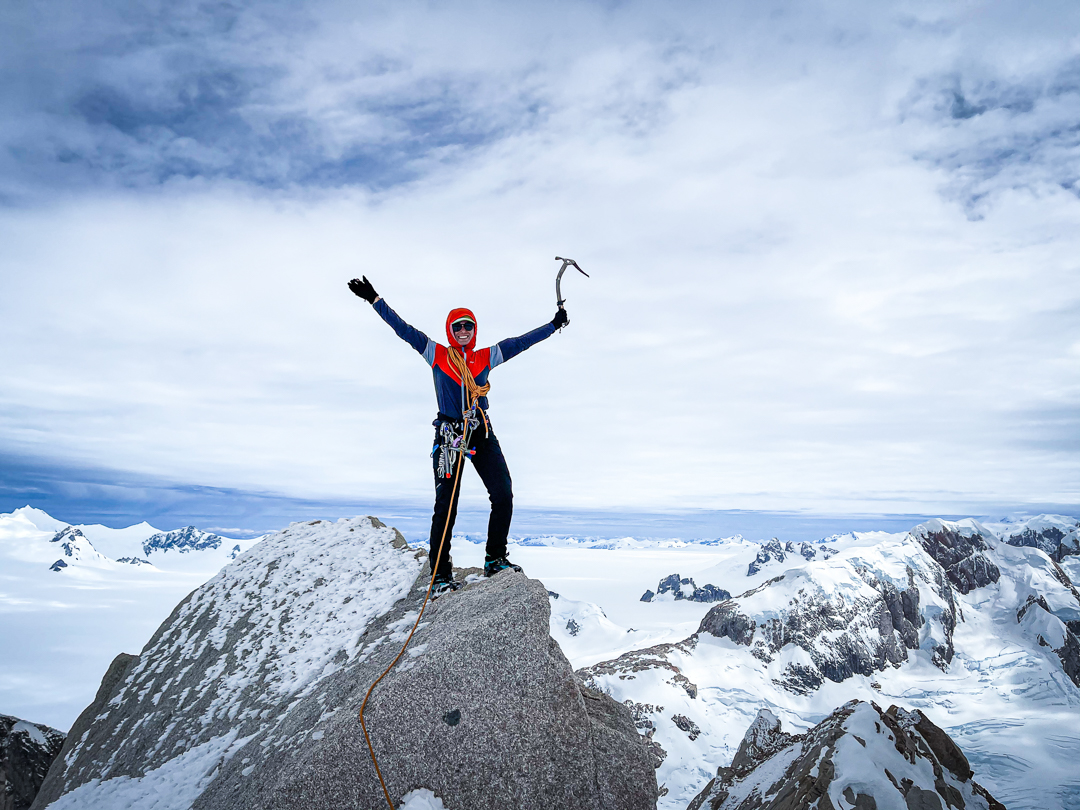 A small rime-covered boulder on top provided a somewhat silly challenge, though necessary to reach the highest point! We took turns on the final 2m of the climb, then paused for a moment to take in the views across the icefield to the Aysén Range and even out toward the fjords of the Pacific coastline.

From the summit, we descended a chossy gully to the plateau, where the sun burned through the cloud blanket, softening the snow. Isi punched through a few snow bridges, and we got to test our two-person glacier travel system, but we made it back to camp safely, tired and thrilled to have completed the first ascent of this beautiful peak. While checking inReach messages, we learned that we were the first all-female expedition to the Northern Icefield! Climbing one of two peaks in the area named for a woman felt fitting.

The next morning, a steady drizzle offered good reason to sleep in. Though satisfied with Cerro Nora, we counted days, debated plans, hiked back to our first base camp to retrieve a food cache, and ultimately decided to push onward. The opportunity to see more of this vast and remote region in good weather outweighed our eagerness for showers and beer. 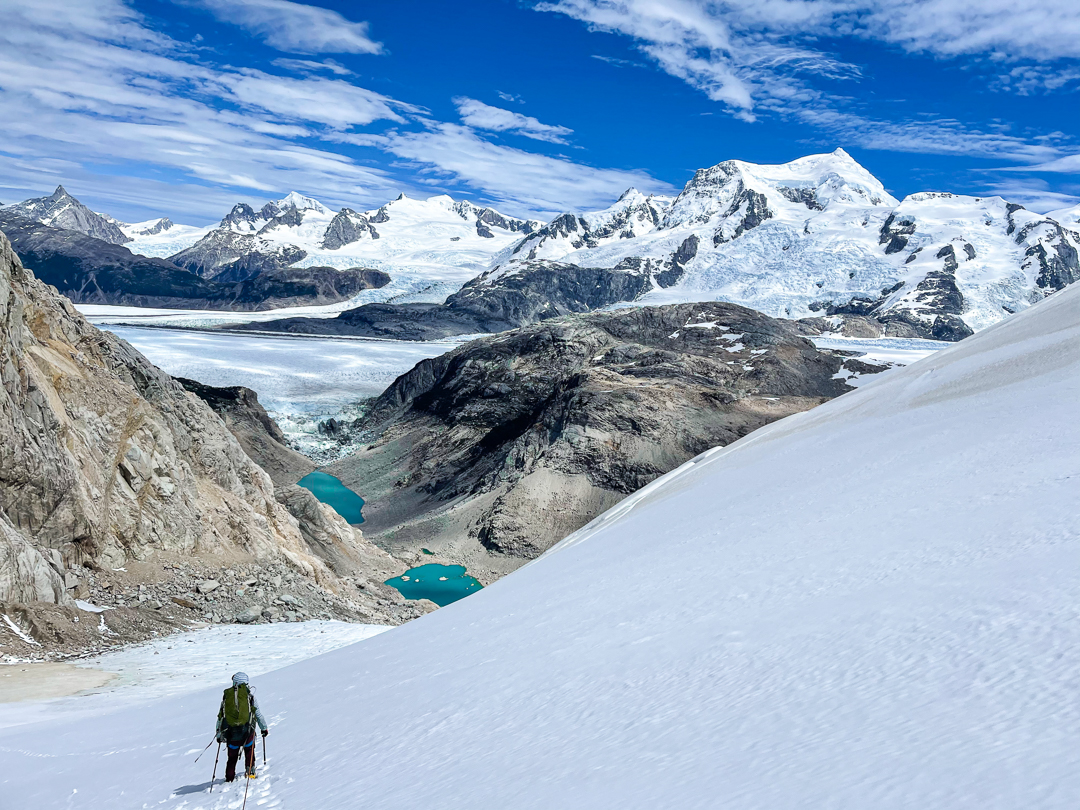 We dropped into the lake-filled valley below, then boulder-hopped our way to the edge of the flat “pancake” of the icefield. From there, crossing the Colonia Glacier proved straightforward: While the lower stretch of the glacier is terribly broken up and close to impassable, we bypassed the last major icefall and found easy travel. On the fly, we chose Cerro Silvia as our “stretch goal;” the peak is located approximately 10km west-southwest of Cerro Nora. As we approached, it became clear that our stretch of sunny weather meant the snow had not frozen for days. Snow bridges were weak and untrustworthy, and the apparent route to the summit, via the east face and north ridge, had many crevassed sections. We made the tough call to turn around.

With lighter packs and stronger legs, we covered ground quickly. For a mountaineering trip, our route covered a huge range of terrain, including both lenga and evergreen forests, alpine meadows, river basins, and glacial lakes. We followed trails of the endangered huemul deer and watched a condor dry its wings after a storm. We enjoyed good laughs as well, as we piled both of us and our gear into one packraft to descend the short section of river into Lago Colonia. We decided to paddle the somewhat spicy Rio Colonia below the lake to avoid a final 10km hike. Back at Campo Tres Limones, Don Evaristo led us on a hunt for chicken eggs hidden in his backyard.

On January 19, we returned to Puerto Guadal. Reflecting in the days that followed, we took pride in our fully self-supported expedition, relishing the freedom and independence that adventuring as a female duo, fully under our own power, had brought. 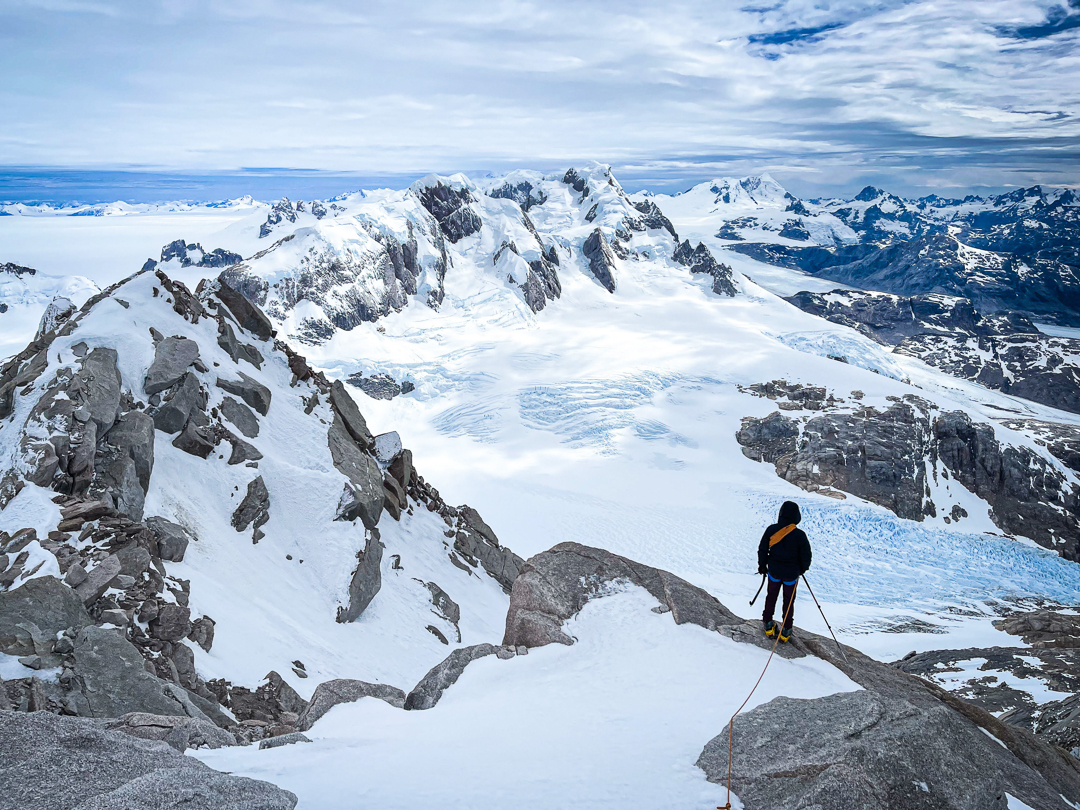 Isidora Llarena on the long and increasingly sunny descent from Cerro Nora (2,460m), with spectacular views of Cerro Arenales and the glacial lakes below the team’s base camp.
Nadine Lehner 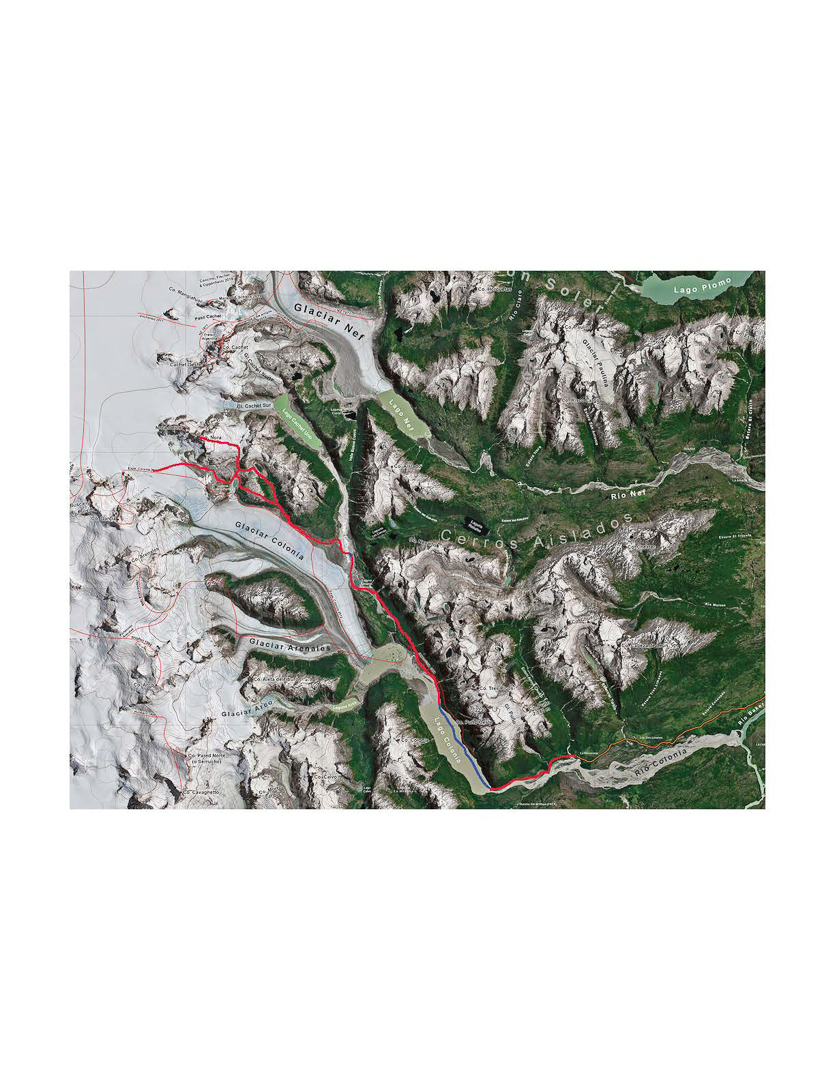 A rough sketch (see the thicker red and blue lines) of the 2021 expedition to Cerro Nora (2,460m), imposed on Camilo Rada’s excellent map of the Northern Patagonian Icefield.

As the team worked their way across the upper Colonia Glacier, they enjoyed tremendous views of Cerro Arenales and the Aysén Range. Cerro Silvia is located center-left behind the cloud.
Nadine Lehner 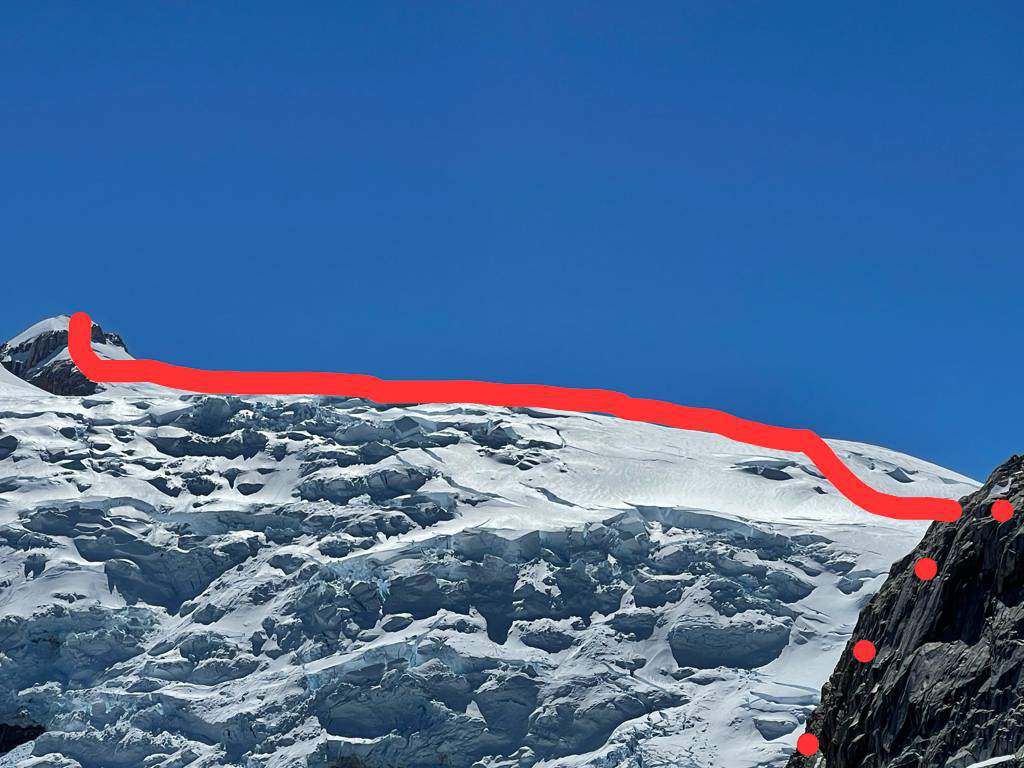 The upper portion of the first ascent route (1,500m, AI2 moderate snow) on the southeast face of Cerro Nora (2,460m). The first one-third of the route is hidden.
Nadine Lehner

Nadine Lehner on the summit block of Cerro Nora (2,460m). 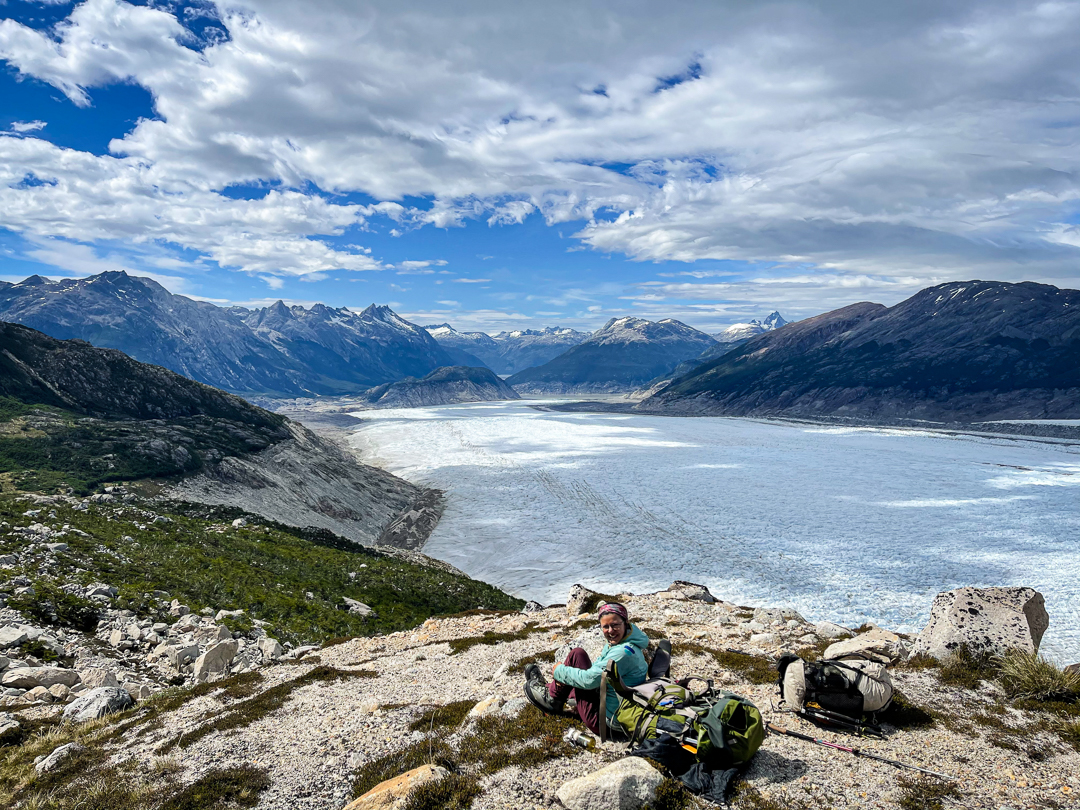 Looking down over the broken-up lower Colonia Glacier on the route out, with Lago Colonia barely visible behind the nunatak.
Previous Next

Isidora Llarena on the long and increasingly sunny descent from Cerro Nora (2,460m), with spectacular views of Cerro Arenales and the glacial lakes below the team’s base camp.
Nadine Lehner

A rough sketch (see the thicker red and blue lines) of the 2021 expedition to Cerro Nora (2,460m), imposed on Camilo Rada’s excellent map of the Northern Patagonian Icefield.

As the team worked their way across the upper Colonia Glacier, they enjoyed tremendous views of Cerro Arenales and the Aysén Range. Cerro Silvia is located center-left behind the cloud.
Nadine Lehner

The upper portion of the first ascent route (1,500m, AI2 moderate snow) on the southeast face of Cerro Nora (2,460m). The first one-third of the route is hidden.
Nadine Lehner

Nadine Lehner on the summit block of Cerro Nora (2,460m).

Looking down over the broken-up lower Colonia Glacier on the route out, with Lago Colonia barely visible behind the nunatak.
Previous Next