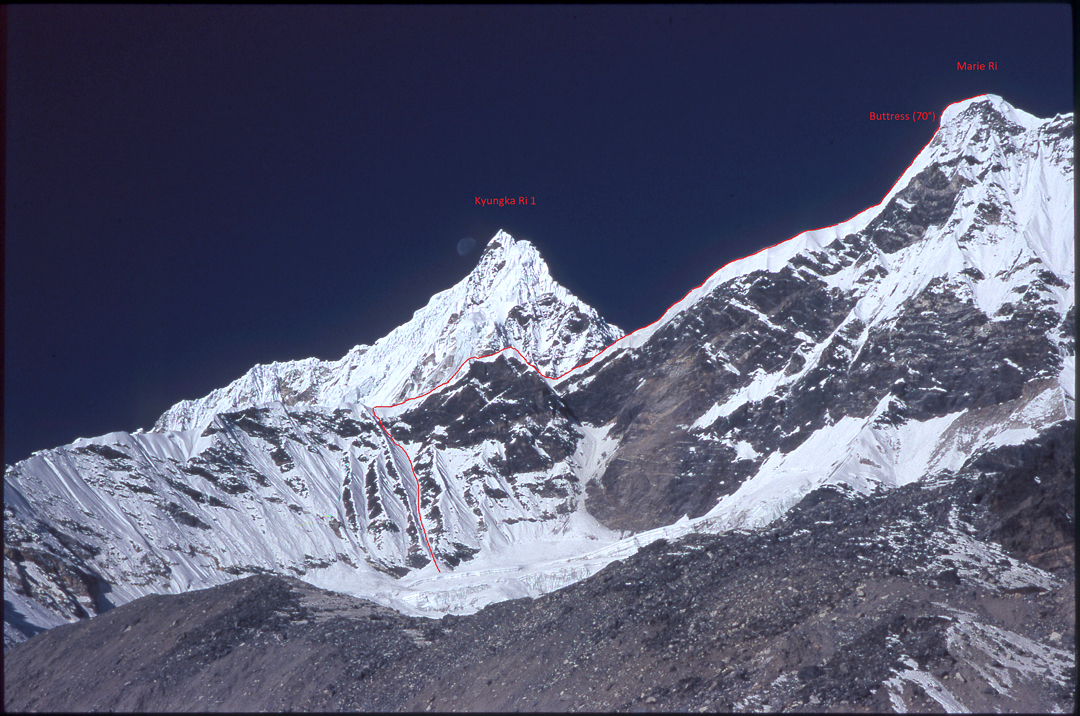 In late 1996, the late Jean-Christophe Lafaille (France) planned a bold, solo, clandestine ascent of the southwest face of Xixabangma during the first few days of the official Nepal-China winter mountaineering season (December 1–February 15). He would start from Langtang, follow the Langtang Glacier north to the border at Hagen's Col, and cross it to the foot of the southwest face. Lafaille was accompanied by Jean-Michel Asselin, then editor of the French magazine Vertical, and four Sherpas (Amchu, Dorje, Gyalzen, and Zangbu).

The group trekked up the Langtang Glacier to the foot of Hagen's Col, but deep snow made progress much slower than anticipated. When they reached the slopes leading to the col and found them to be hard ice, they retreated. During their return journey, they camped near the junction of the Langtang and Kyungka glaciers (ca 4,870m), where Lafaille was attracted by a prominent peak (6,140m on the HMG-Finn map, 28°18'0.91"N, 85°40'58.68"E) on the long east-northeast ridge of Kyungka Ri I (6,599m).

The next day, December 1, he left camp early and reached the summit in a little over seven hours. He climbed a steep, fluted eastern face of 250m to reach the crest of the south-southwest ridge at around 5,800m, and followed this to the summit, negotiating a 70° ice step high on the crest. Lafaille christened the peak Marie Ri after his daughter, who would be two years old the following day.

From the camp, Asselin was able to follow the entire ascent, shooting pictures with a long telephoto of Lafaille reaching the summit. Despite the images being published in Paris Match, the ascent fell under the radar of the dedicated climbing press; the peak does not appear on the list of Nepal's permitted mountains. Fifteen years after his disappearance on Makalu during a bold winter solo, Lafaille's ascent of Marie Ri now has a full report, and the peak has been properly identified. [Editor’s Note: Himalayan climbing researcher Eberhard Jurgalski noted that the top named Marie Ri is a subsidiary point along the east-northeast ridge of Kyungka Ri I, and it might be best defined as the “east top” of the Kyungka Ri East (6,187m on the HMG-Finn map).]

(A) Kyungka Ri (6,599m), with a large pale moon just left of the summit. (B) Marie Ri (6,140m) and the route followed in December 1996 by Jean-Christophe Lafaille. A 70° ice step can be seen just below the summit.
Jean-Michel Asselin
Previous Next

(A) Kyungka Ri (6,599m), with a large pale moon just left of the summit. (B) Marie Ri (6,140m) and the route followed in December 1996 by Jean-Christophe Lafaille. A 70° ice step can be seen just below the summit.
Jean-Michel Asselin
Previous Next