Another World: The Solo First Ascent of El Chileno Grande 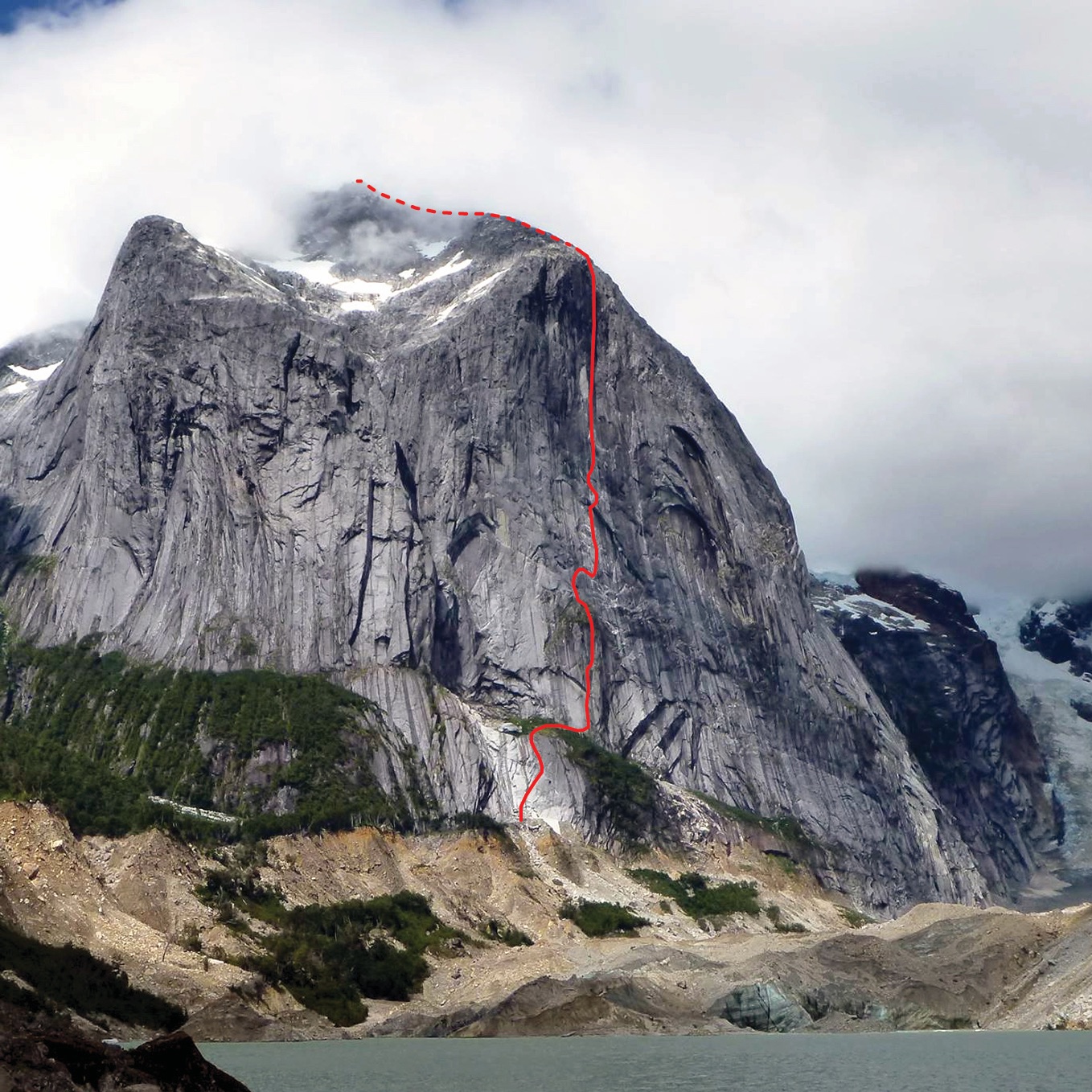 When I first saw photographs of the wall, it was definitely not love at first sight; in fact, it took me some time to realize that I really wanted to give it a go. The wall is impressive, but it didn’t grab my attention. And the poor weather in the Aysén Region of Chile made me cautious. The weather conditions make such a difference on a climb, and poor weather significantly reduces the likelihood of success on a solo big wall. It’s true that being able to climb something depends not only on the weather but also on one’s ability to cope with adverse conditions; we don’t have the power to change the clouds, but we have the capability to climb in bad weather. Still, I thought it would be better to wait and see if another wall project would materialize in a more bearable place.

But a few weeks after I got those photos of the wall from two locals, Pere Vilarasau and Pancho Croxatto, the positive memories of other, similar ascents weighed more than the negatives and inspired me to give it a try. Sometimes I have the feeling that we don’t choose a particular challenge, but rather there are situations, or walls, or places, that choose us. There isn’t a logical explanation. It’s as if life suggests each moment, and we have the option to decide whether we will make the attempt.

I decided to go to El Chileno Grande.

It ended up being a two-month trip, during which I spent a total of a month and a half climbing and hauling my gear to the wall and back. [The west-facing granite wall called El Chileno Grande is at about 46°32’24”S, 73°05’24”W, a little over five kilometers east of the Exploradores Glacier, as the crow flies, and at least ten kilometers from the road.] I did a total of 16 days carrying loads (round trip), through glacier, forest, and moraine, in order to transport six bags of 25kg apiece. Andrea, Marco, and Manu, who worked in the area and to whom I am profoundly grateful, offered to help, each doing one carry. The rest of the carries, and moving the equipment to the base of the wall, I did on my own, walking more than 150 kilometers going there and back.

After fixing the first 180 meters, I spent 33 days living on the wall (February 7–March 10) in order to complete the new route. It’s a lot of days, but the wall is huge and demanding—not just from pure climbing difficulty but also because of complex moves to link crack systems. Overhangs, pendulums, and traverses made hauling and rappelling complicated and slow. In fact, descending the wall took four days, having to fix pitches beforehand in order to rappel with the haul bags.

One 330-meter section of vertical terrain had a lot of vegetation, which made the climbing in this stretch hard to enjoy. I didn’t really know how to grade it, so I’ve marked this section MT for matojo tracción, or “bush traction,” because it involved climbing the vegetation that filled the cracks. Eventually I resorted to using crampons and an axe to make progress. The majority of this section had little to no protection, with usually only one bolt at each belay, hand-drilled, following the rules of the park.

The rest of the route (another 850 meters) was cleaner face and cracks, including some offwidths and chimneys. The slab sections had moss that become slippery when wet. I climbed capsule-style, with three wall camps. Two of these had two-bolt anchors, but many of my belay anchors had only a single bolt for security and hauling, and when it came time to descend, I ended up rappelling nearly the entire route, with the haul bags, from one bolt at a time. 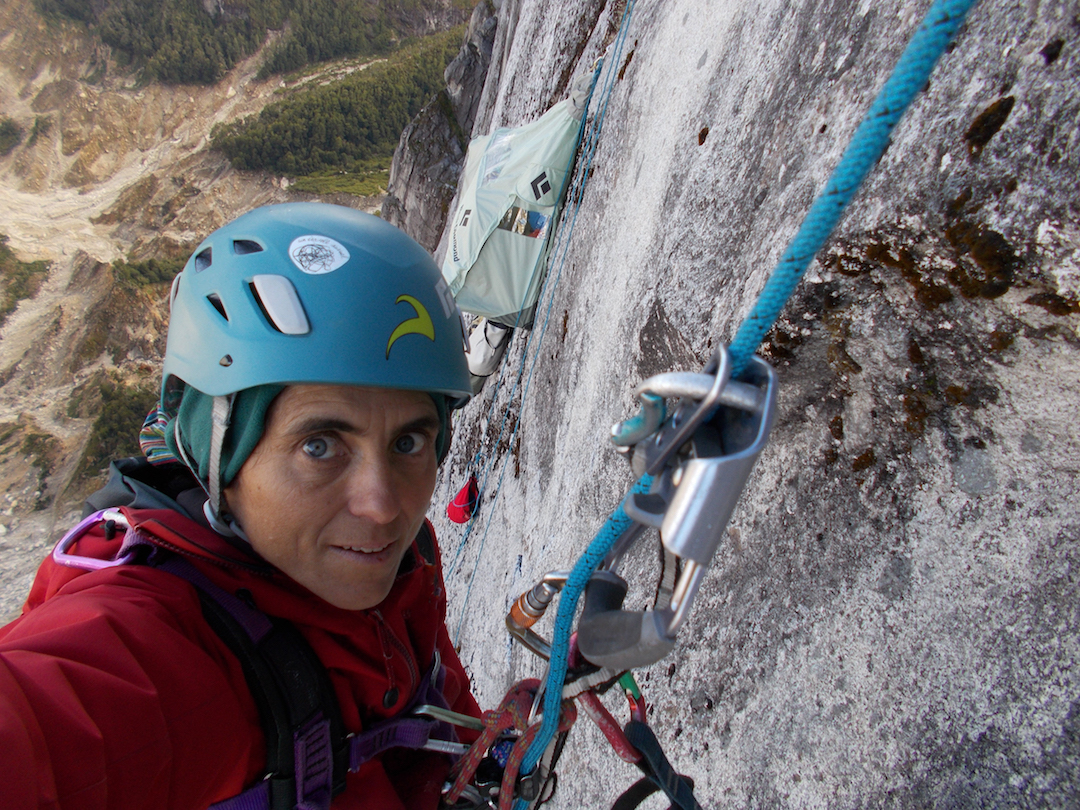 I can’t complain about the weather I had. It rained 50 percent of the days—normally it’s more. There were two big storms with rain and strong wind. During one of these, the wind and rain battered the portaledge until it flipped completely over, with me inside, but it held together. I hit my head, and I couldn’t get the portaledge righted. I had to crawl outside in order to flip it, but the wind spun it back as soon as I started trying to straighten it. Finally, I was able to get it righted, but before going back inside I tied the haul bags to the portaledge to weigh it down so it wouldn’t happen again.

I was completely alone and without contact. I had no phone, no radio, and no GPS, because that is how I prefer to have these experiences. If I brought these things, even if I didn’t use them, just the fact of knowing I had them, that I could make a call at any moment, would completely change my experience and make it that much more difficult to concentrate on the circumstances I was living. On the other hand, with no phone or radio, you don’t have the ability to get a weather forecast, so deciding the best logistics for the climb depends on just going for it each day. The final attack on the summit is the most delicate moment in this regard, because there is such a great margin for error.

During this time on Chileno Grande, some circumstances happened at the perfect time, and because of that I named the route Sincronia Màgica (“magic synchronicity” in Catalán). When things—no matter how hard or difficult they can seem—are happening and flowing, and then you finally reach what you have aspired to, the experience has been worth it.

I returned happy from this experience, which for me created a distinct feeling of “before” and “after,” just like every big trip. To be alone for so many weeks or months, in silence, incommunicado, in hard conditions, has an effect. However, this particular return feels different because of COVID-19, causing the before and after to feel more blurred; I have the feeling that I have not yet finished “returning.” In a way, I keep feeling that synchronicity of events. Normally, when I return from an expedition, I need time to reacclimatize myself to “civilization.” But in this case what has changed has been the entire planet. The world has changed, and us along with it.

Summary: First ascent of the west face of El Chileno Grande, in the Aysén Region of Chile, by Sílvia Vidal, February-March 2020: Sincronia Màgica (1,180 meters, A3+ 6a+). At the top of the wall, Vidal scrambled 30 minutes to the westernmost top of the mountain, which, she discov- ered, was not the highest point.

About the Author: Sílvia Vidal lives in Catalunya, Spain. Information about her talks and presentations is at vidalsilvia.com. She would like to thank all the people who helped with this expedition, both at home and during her time in Chile. She also thanks CONAF, the administrator of Chilean national parks, “for their help and open-mindedness about this style of climb.”

Francisco “Pancho” Croxatto, a Chilean mountaineer and glacier guide, was the first to scope this wall, around 2002, and was responsible for christening it. He named it after one of the early settlers of the area, a large man who was affectionately called “el Chileno Grande.”

About a decade later, Croxatto showed the wall to Pascal Mao and Fabien Burlon, who in turn alerted French climber Etienne Tafary. He visited the area in 2015, with Felipe Andrade, Matias Larrain del Sante, and Enzo Oddo, but bad weather only allowed them to climb a few pitches. Tafary returned in January 2020 with Antoine Eydoux, Etienne Grosclaude, and Pierre-Jean Lallement. The French climbers spent seven days on the wall, climbing 400 meters, before heavy rain forced them to retreat. Their attempt was far to the right of the line climbed by Vidal, whom they met as they were walking out and she was just entering the valley for the first time.

The wall is located inside Laguna San Rafael National Park and is accessed via a private park (www.parquexploradores.cl). To visit, you need permission both from CONAF and from the private park; both permits are relatively easy to secure. As in any wilderness area, “leave no trace” principles should be followed. —Rolando Garibotti 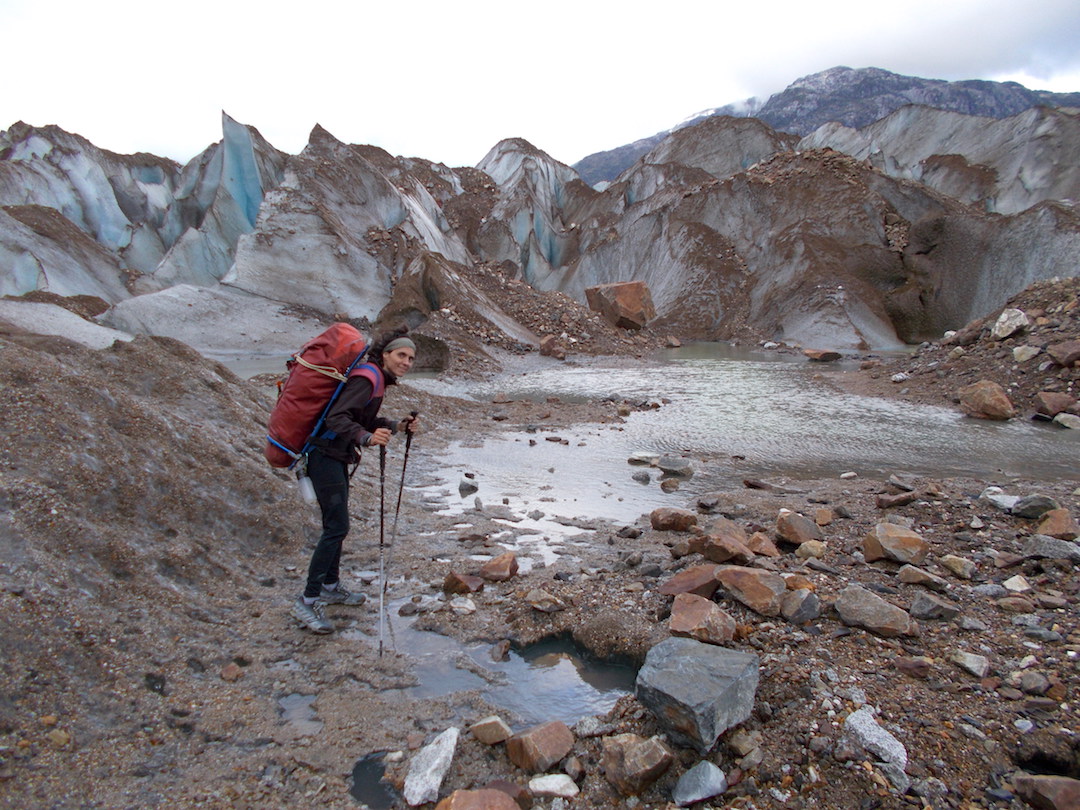 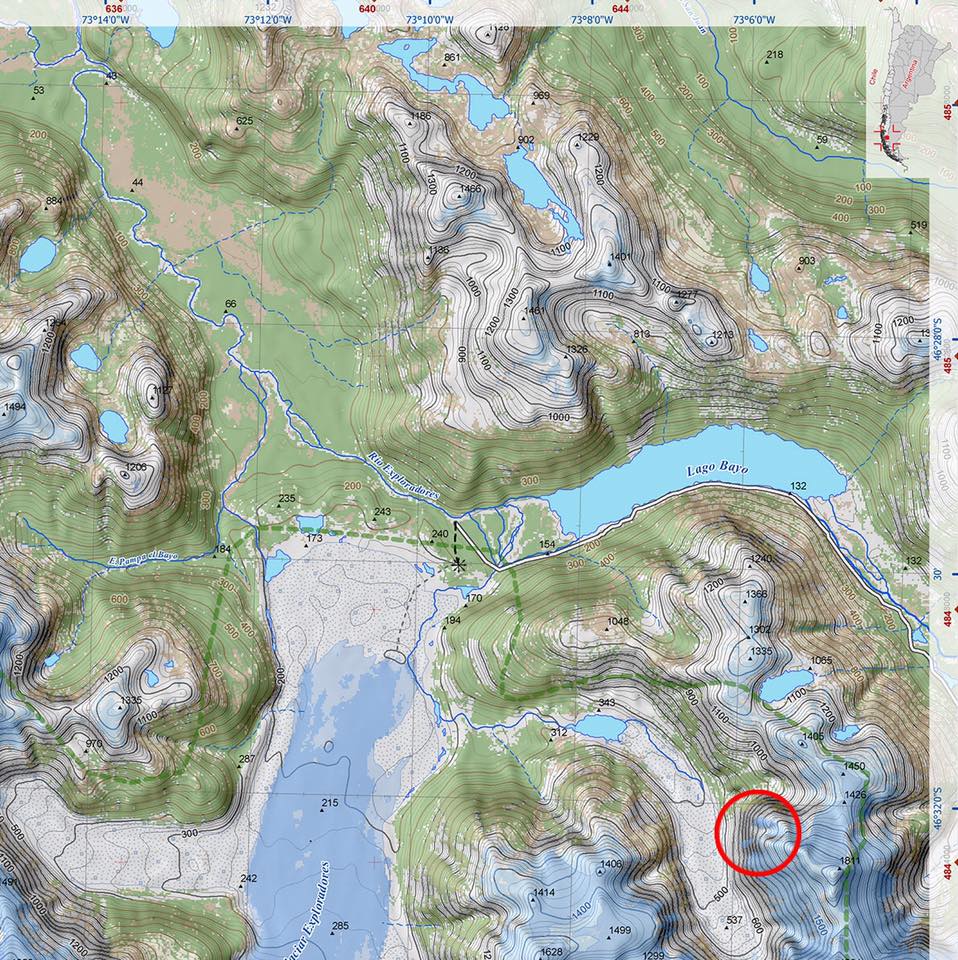 Location of the wall called El Chileno Grande, east of the Exploradores Glacier.

Sincronia Màgica on the west face of El Chileno Grande. From the top of the wall, Vidal scrambled to the closest summit in the clouds.
Felipe Andrade

Location of the wall called El Chileno Grande, east of the Exploradores Glacier.

Sincronia Màgica on the west face of El Chileno Grande. From the top of the wall, Vidal scrambled to the closest summit in the clouds.
Felipe Andrade