It's Time for Climbers to Take this Risk More Seriously

Every winter, ice climbers are caught and sometimes killed by avalanches. Even small avalanches can be deadly when they get funneled into the narrow gullies where ice climbs form. So understanding the avalanche conditions and carrying rescue gear when climbing is essential for many climbs.

Yet despite this reality, climbers have been slow to embrace basic avalanche safety practices, even when they always use avalanche gear when backcountry skiing. This contradiction makes no sense, and it’s high time for a paradigm shift.

Once you’ve determined if your ice route is formed, your next move should be to figure out whether it’s threatened by avalanches. Any steep snow slopes on the approach, the route, above the route, or on the descent have the potential to release an avalanche.

If your route is threatened by avalanches, then you need to know more. Is the climb located in a gully with avalanche start zones overhead? Will you be climbing through snow slopes above cliffs? How about the approach—will you be walking under avalanche paths or kicking steps up a 40° slope to reach the base? How hard is the route—can you climb fast or will you be exposed to avalanches for hours? What does the local avalanche forecast say? You need to answer all of these questions before going climbing.

Avalanche risk in ice climbing has three main ingredients: 1) enough snow to produce an avalanche, 2) avalanche-prone terrain, and 3) climbers exposed to this hazard. Remove any one of these elements and you’ve eliminated the avalanche risk.

But while eliminating avalanche risk ensures safety, it won’t get you up the routes on your hit list that are subject to avalanche hazard. For this, you’ll need to manage the risk by assessing its individual elements and understanding how they affect you and your partner. 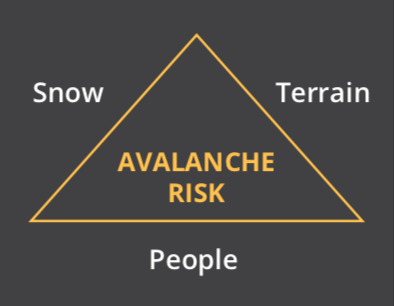 The best indicator of unstable snow is avalanche activity. Both slab avalanches and sluffs are threats to ice climbers, because it doesn’t take much to knock you off your front points. If avalanches are occurring near your route, then it’s safe to assume the snow on your route is also unstable. Here are the big three factors:

(1) Precipitation – new snow and especially rain can overload the snowpack

Minimize your exposure by positioning belays out of avalanche terrain or in protected locations, moving together when you can, moving one at a time when necessary, belaying across exposed slopes, and spending no unnecessary time exposed to avalanches. These are the strategies that keep experienced climbers alive. Here are the terrain basics to keep front of mind:

For risk to exist, something must be “at risk,” and in climbing this is people, delib- erately exposing themselves to avalanche hazard. All people are fallible, and human factors are well-recognized as a major contributor to avalanche accidents. Here are some considerations:

(3) Trophy hunting – don’t obsess over one climb; have options and let the conditions determine your route 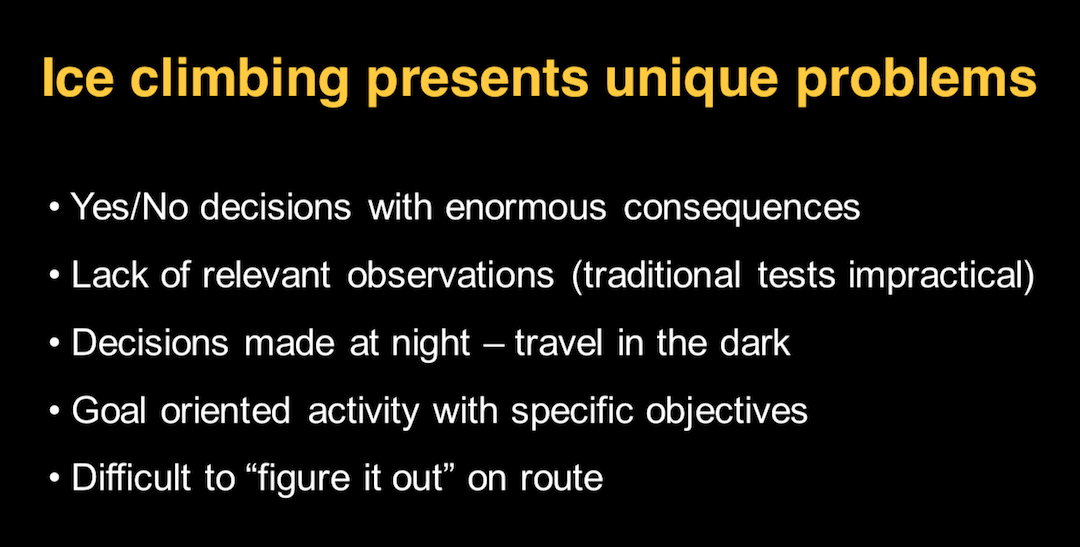 An excellent source of information on local conditions is the public avalanche forecast, found at avalanche.ca in Canada and avalanche.org in the USA. Locals watch the forecast regularly to stay abreast of conditions; start checking it early to get a sense of the snowpack.

Don’t climb in avalanche terrain unless the danger rating is "Low" or "Moderate." When it’s "Considerable," avalanches are likely, so now you need to know specific details about the route and what might trigger an avalanche there. If you don’t understand this, then don’t climb there. "High" and "Extreme" are obvious—stay out of avalanche terrain.

Many ice climbs form directly beneath large avalanche slopes. To climb these routes, you need to determine whether a natural avalanche will release while you’re there. This is difficult, but the avalanche forecast, weather forecast, and ridge-top weather stations (accessible online) will provide some of the information you need. Always remember that snow depth, wind effect, and air temperature will be much different high above your climb, so don’t be lulled into complacency by snow conditions near your route.

Climbing steep snow is usually part of ice climbing, and this can lead to triggering a slope yourself. Whenever possible, go around snow slopes or cross them as high as you can to reduce the amount of snow above you. If you have to climb directly up the middle of a big slope, the best tactic is to evaluate smaller, safer slopes of simi- lar character to get sense of conditions. Then consider spacing out, going one at a time, or belaying, even if the slope is small but the consequences are catastrophic.

If you’re climbing and exposed to avalanche risk, then you should use avalanche rescue gear. If someone gets buried, you have about ten minutes to find them, dig them out, and clear their airway before they asphyxiate. Each member of the team should carry an avalanche transceiver, probe, and shovel. Nobody likes extra weight, so be thoughtful about when and where you carry the gear—plan it out like you plan your rack. Do you only need it for the approach or for the whole route? Maybe take one shovel up the route instead of two. What about the descent?

Even if you’re climbing a route where you think an avalanche would be unsurvivable, somebody will still want you back, which means SAR teams will be searching for you. Wearing a transceiver and using clothing equipped with the Recco system does everyone a favor by making you searchable.

Good avalanche skills are part of being a solid alpinist and waterfall ice climber. While climbing a great route feels awesome, climbing it in good style and doing everything you can to reduce your risk feels even better. Adding risk without additional benefit is pointless, so learn about avalanches, carry the gear, and respond to the ever- changing conditions.

ABOUT THE AUTHOR: Grant Statham is an ice climber, IFMGA mountain guide, and avalanche forecaster based in Canmore, Alberta. He works with Parks Canada’s search and rescue and avalanche safety programs in Banff, Yoho, and Kootenay national parks. 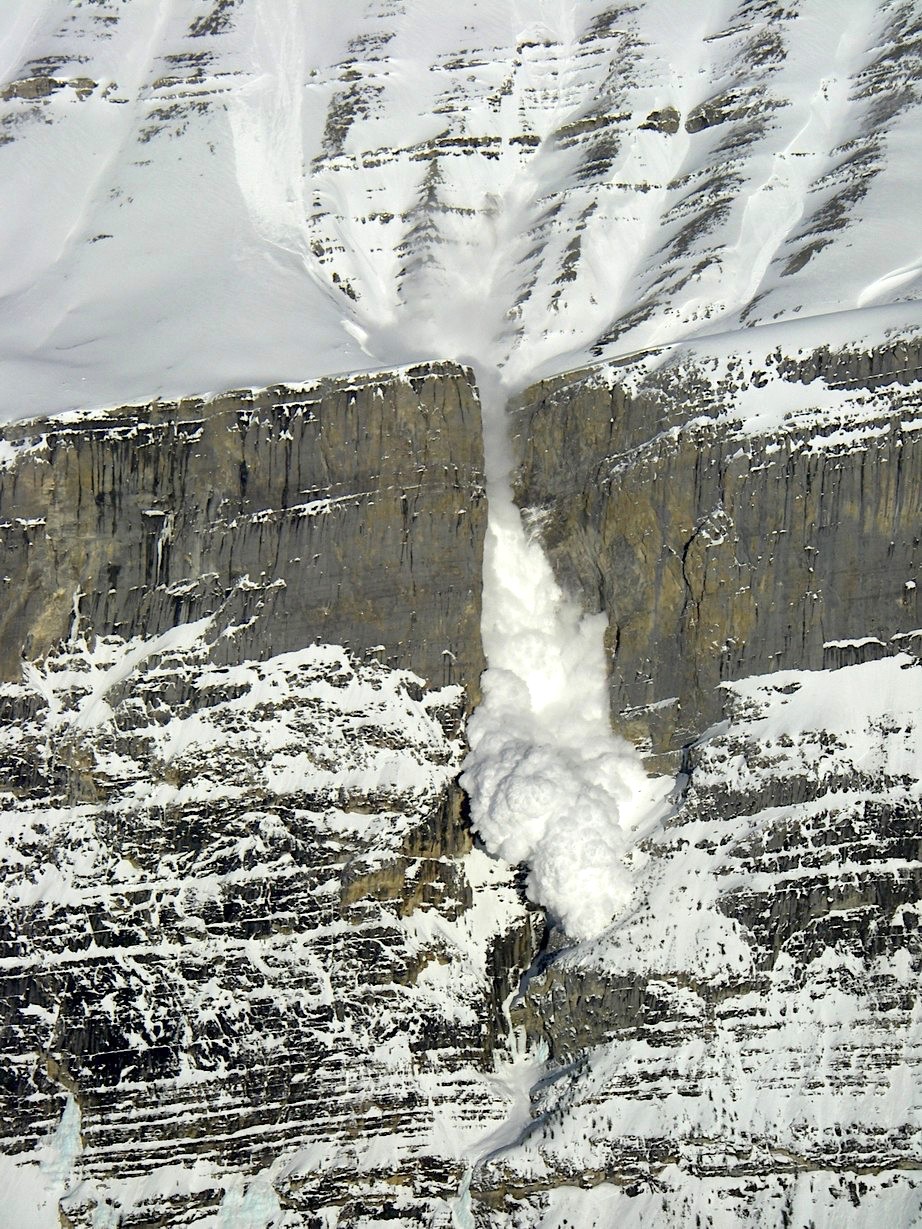