Drone Use is Growing Fast in the Mountains. Where Should the Lines Be Drawn? 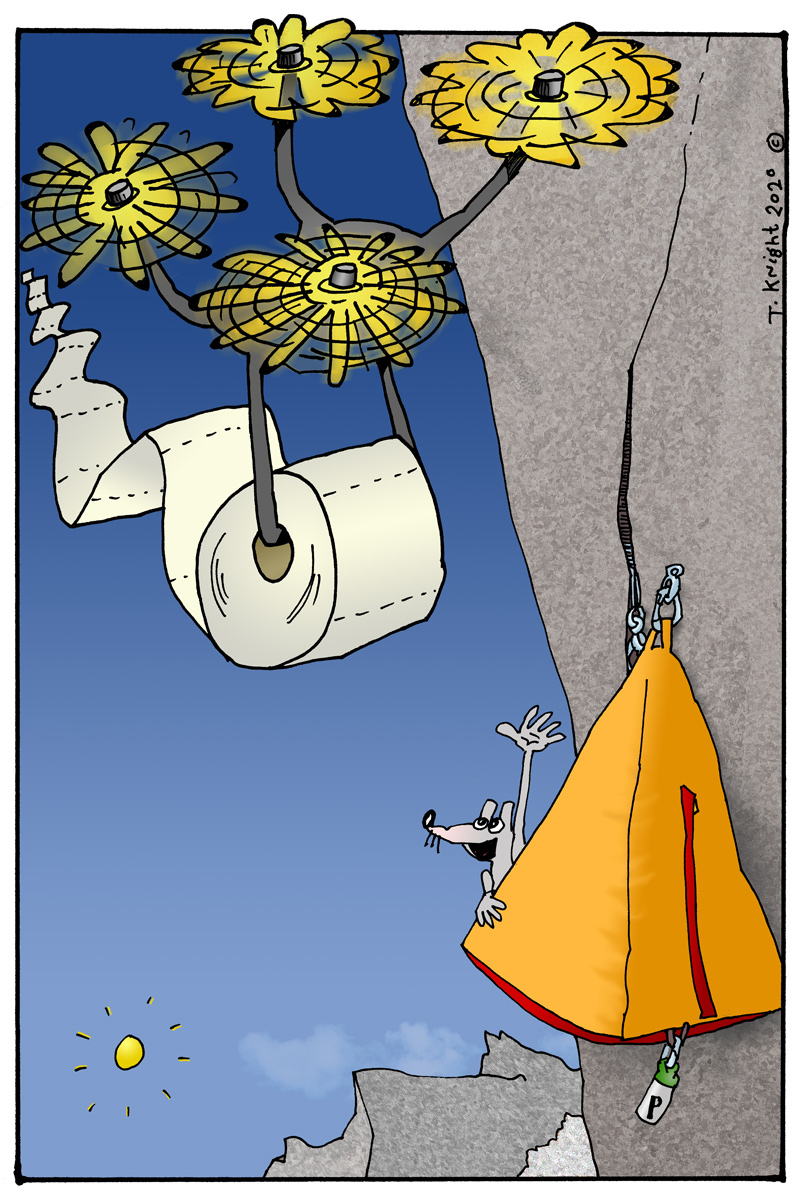 In the last decade, the use of remote-controlled quadcopters, a.k.a. drones, has skyrocketed. In the United States alone, more than one million unmanned aerial vehicles (UAVs) have been registered with the Federal Aviation Administration. Today’s quadcopters are lighter, more reliable in the mountain environment, and can carry heavier payloads than ever before, and reports of drone use by mountaineering expeditions around the world have been filtering into pages of the AAJ—in sometimes surprising ways.

Drones infuriate many climbers with their loud whine and the general sense of invasiveness in relatively pristine environments. Many national parks and other jurisdictions around the world have banned their use. Yet creative uses of these tools continue to grow. Amid these trends, where are we headed and what guidelines should climbers follow?

Drone use in the climbing world was pioneered by photographers and videographers, allowing spectacular aerial imagery at a tiny fraction of the cost of filming by helicopter. The fly-bys and vertical tracking shots of climbers in action have become so ubiquitous they almost are clichés—albeit, often very beautiful ones.

Drones are increasingly used to capture imagery in the highest mountains. Photographer Sean Haverstock operated a drone from advanced base camp below Lunag Ri in Nepal in 2018 to film the late David Lama soloing the first ascent of the nearly 7,000-meter peak, resulting in the cover shot of the 2019 American Alpine Journal. Lama also was one of the subjects of an early experiment in high-altitude mountaineering photography, when Corey Rich and pilot Remo Masina collaborated on drone footage of Austrians Lama and Peter Ortner making a free ascent of Trango Tower in Pakistan in 2012. In a beautiful demonstration of the power of drone photography, Renan Ozturk flew a drone from the North Col on Everest in 2019 to capture a unique 360° panorama of Everest and its surroundings.

Professional photographers aren’t the only ones using these tools to capture stirring images. In a solo expedition to Greenland in 2018, the German climber Robert Jasper used a drone and other tools to photograph himself soloing a new route on an isolated granite tower. In places where drone photography remains legal and socially acceptable, it seems likely there is still enormous potential for creative image making and storytelling.

From capturing aerial photos and video in the mountains, it’s just a short step to using that imagery to plan routes and conduct reconnaissance. The first mention of such tactics in the AAJ came in 2016, when a team of Polish climbers—the first to visit the spectacular Lachit Valley in Pakistan—used a drone to photograph side arms of the glacier en route to making two first ascents.

Examples are quickly mounting of drones used to avoid exposure to dangers unseen from below. French climbers in Nepal in 2017 changed their planned attempt on an unclimbed 6,475- meter peak to the completely opposite side of the mountain after a drone reconnaissance revealed dangerous seracs above their original route. In the autumn of 2019 on Everest, several teams canceled their expeditions after a drone studied a huge serac poised above the Khumbu Icefall and determined it to be an exceptional threat. 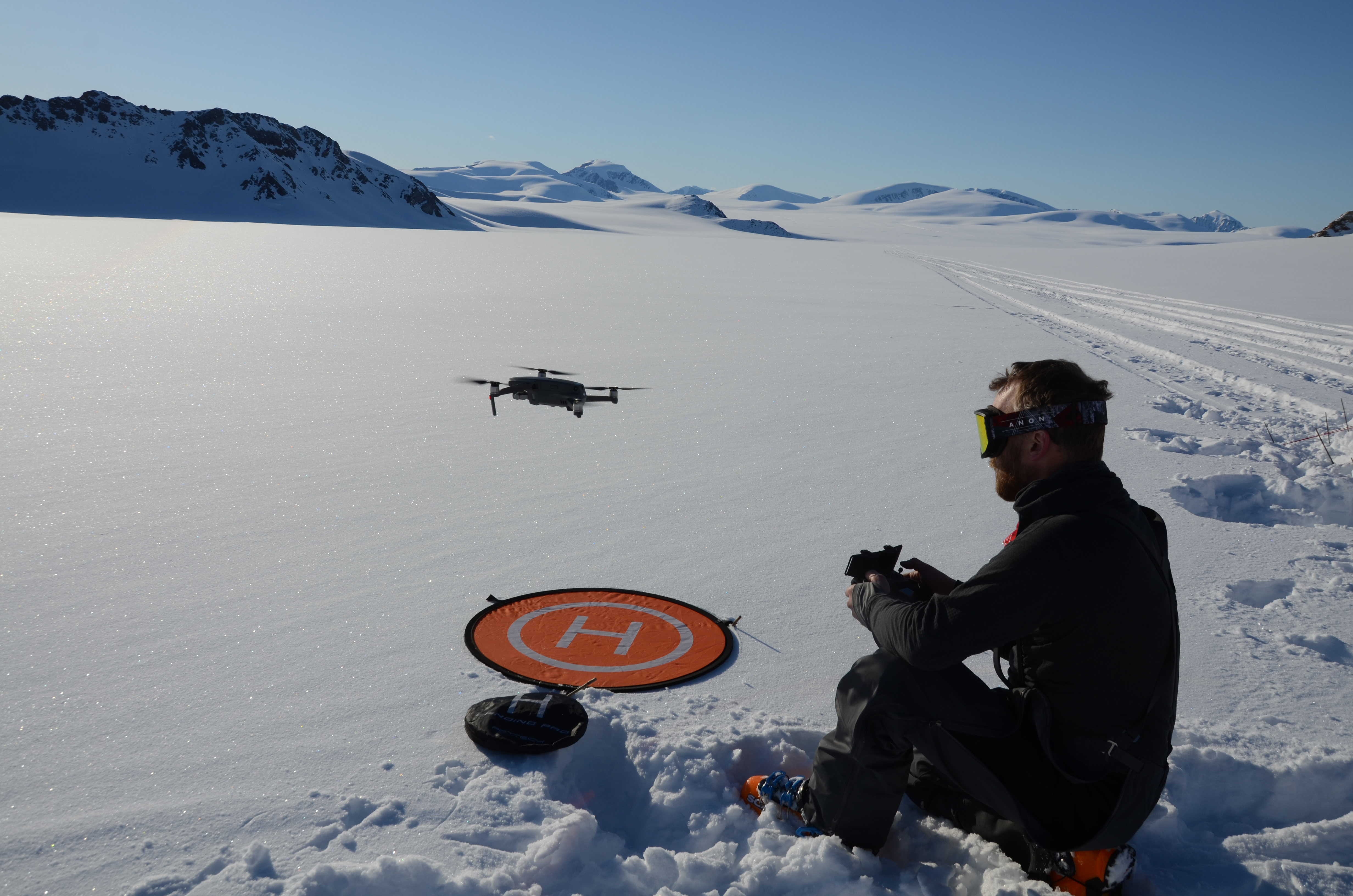 Longtime Arctic explorer Greg Horne and his team carried drones for the first time on an expedition last spring, visiting the Prince of Wales Icefield on Ellesmere Island. Their original plan was to use the drones for studying ivory gulls, but after encountering more crevasses than Horne had seen in 10 previous expeditions, and after a crevasse fall with a 70-kilogram loaded pulk (sled), the team began deploying a drone to scout the best places to cross crevasses and meltwater river channels that were up to 50 kilometers long. “Every evening, after camp was set and supper done, we would fly a recon mission to scout ahead,” Horne wrote in an email. “One evening, after I was only airborne a couple seconds, I saw that camp was right beside a multi-kilometer- long crevasse we could not see from the ground and hadn’t discovered through probing. In fact, my pulk was parked right on top of it. Re-probing determined the bridge was nearly two meters thick—still, after the crevasse fall a week earlier, our senses were on high alert.”

In the summer of 2018, Scottish climber Rick Allen went missing during a summit bid on Broad Peak in the Karakoram. Using a telescope, a climber at base camp spotted a dark dot at around 7,000 meters that could have been the missing climber, and Polish climber and photographer Bartek Bargiel, also in base camp, agreed to fly his drone up Broad Peak for a look. Using the drone, Bargiel located Allen, still alive, marked his precise coordinates, and helped lead rescuers to him. [See video clip below.]

Although their capability may be limited by weather, visibility, altitude, and payload restrictions, drones have been widely adopted by search and rescue teams; they can be equipped to detect avalanche transceiver signals and Recco reflectors or to capture thermal imagery for low-visibility searches, and increasingly they are able to deliver supplies directly to stranded or injured subjects. Bartek Bargiel, who flew his quadcopter as high as 8,500 meters to scout and film his brother Andrzej’s first ski descent of K2 in 2018, also used the machine to fly medicine to Camp 3, where Andrzej’s climbing partner was stranded with debilitating back pain, and to deliver a GoPro camera and batteries that Andrzej had forgotten at base camp.

Many wonder how far climbers will push the limits of this new form of aid. It’s not hard to imagine powerful drones being deployed to resupply climbers at high camps with extra fuel or food, or even to deliver a spare crampon when one is dropped. In the old days, such a mistake usually would mean the end of an expedition. Now, perhaps not.

Many mountain visitors despise drones. Whizzing close by a crag, they may shatter the focus of a climber making delicate moves, and their persistent whine in flight breaks the silence that many seek in the mountains. They may have negative impacts on cliff-nesting birds and other wildlife. As a result of these and other concerns, drones are illegal to fly in many places, including national parks in the United States, Argentina, and many other countries; other jurisdictions require a permit for drone use.

Even climbers who have deployed drones themselves for purposes other than photography may feel misgivings. “I used a drone once while I was halfway up an unclimbed wall to scout out the terrain above, and that’s one of the few stylistic regrets I have from my entire climbing career,” said AAJ associate editor Chris Kalman. “It felt like cheating. But more importantly, it was antithetical to the very reason I seek out new routes. I don’t want to know what’s up ahead. That’s why I’m up there in the first place.”

Yet, many tools and technologies once decried as cheating in rock climbing and mountaineering now are used without a second thought, from cams and chalk to GPS systems and weather forecasts delivered by satellite phone. Few climbers today feel any guilt about studying Google Earth to plan an expedition. Will drone imagery soon be regarded as little different? “I’ll bet that most climbers have referred to a photo of a mountain while climbing to help with route-finding,” said alpinist Colin Haley. “Aerial photographers like Bradford Washburn and John Scurlock have both been celebrated for their contributions to climbing. A drone might be even more useful than their photographs—and also much quieter and more environmentally friendly than their planes—but the basic purpose is the same: using technology from afar to help decipher the route.”

It seems climbers may need a new set of ethical guidelines for drone use to go along with the “rules” of clean climbing and free climbing and alpine style. Knowing and following the laws governing drone use in a given area is paramount—no climber or photographer has any excuse for flouting these rules. Avoiding negative impacts on fellow climbers’ natural experience and on wild creatures is equally essential.

In remote or high-altitude areas where no impact on other climbers or wildlife is likely, and there are no regulations preventing flights, the use of drones becomes a question of style, like so many choices in climbing. What do you hope to get out of a climb? Will you adopt any technology to improve the odds of success (and return with the imagery to prove it)? Or will you eschew this new tool to maintain a sense of fair play and the allure of the unknown?

About the Author: Dougald MacDonald is editor of the American Alpine Journal.

Testing a drone soon after landing on Ellesmere Island for a multi-week ski tour and research project. The drone proved invaluable for scouting the safest route over the icefields.
Greg Horne
Previous Next

Testing a drone soon after landing on Ellesmere Island for a multi-week ski tour and research project. The drone proved invaluable for scouting the safest route over the icefields.
Greg Horne
Previous Next