Storm Mountain, Eye of the Storm

After much discussion over Thanksgiving dinner at Jim Elzinga’s house (and some primo beta from Ian Welsted), Maarten van Haeren and I walked to Upper Twin Lake on October 16 to have a look at an unclimbed line on the lower north face of Storm Mountain. Conditions seemed really good: shin-deep snow and a light freeze overnight at 2,000m. Plus, our friends Max and Paul had made an attempt on the line two days prior, and there was a track straight to the base of this unclimbed route! You don’t get that every day.

Maarten led us up two fantastic pitches of ice (WI3–5), complete with a mixed finish (M6). Above was a beautiful thin runnel of ice, steep but with good stems, what dreams are made of. We were fired up.

I continued past steps of WI3 ice and deep snow, slogging to the base of a hanging ice pitch, the most distinct feature from the base. It ended up being a fantastic pitch of M5+ on quartzite into 30m of WI3—a 70m rope stretcher.

Maarten took over again, leading through blocky terrain to the upper snow band and the land of steep, long dihedrals. We hemmed and hawed, wondering about the time commitment of the terrain above. A classy “traverse” to the ridgeline was proposed, but after a bit of encouragement, Maarten stepped up for two pitches of incredible corner climbing. The left wall was polished slab interspersed with perfect edges and ledges, and the right wall gave good gear and hooks. The position and exposure were phenomenal.

I went back to the front, leading two 70m pitches of moderate mixed up to the ridge. There was no longer any thought of the summit as darkness crept in, wind picked up, and snow started to fall. Plus, the east ridge heading up above us didn’t look enticing and would have definitely been a change of style from the 700m of new steep terrain we had just climbed. We marched down to Lower Twin Lake, making one rappel off the ridge and unfortunately getting lost and cliffed out above the lake. Our GPS again came to the rescue.

After 16-ish hours on the move, we reached our campsite and Maarten, being the gentleman that he is, prepared two freeze-dried meals and saved me from a Snickers dinner. We drifted off into the night and woke under a blanket of fresh snow and a soaking wet tent. We were back to Canmore by noon. With bad weather on either side of our ascent, the eye of the storm had delivered: Eye of the Storm (700m, M6 WI5). 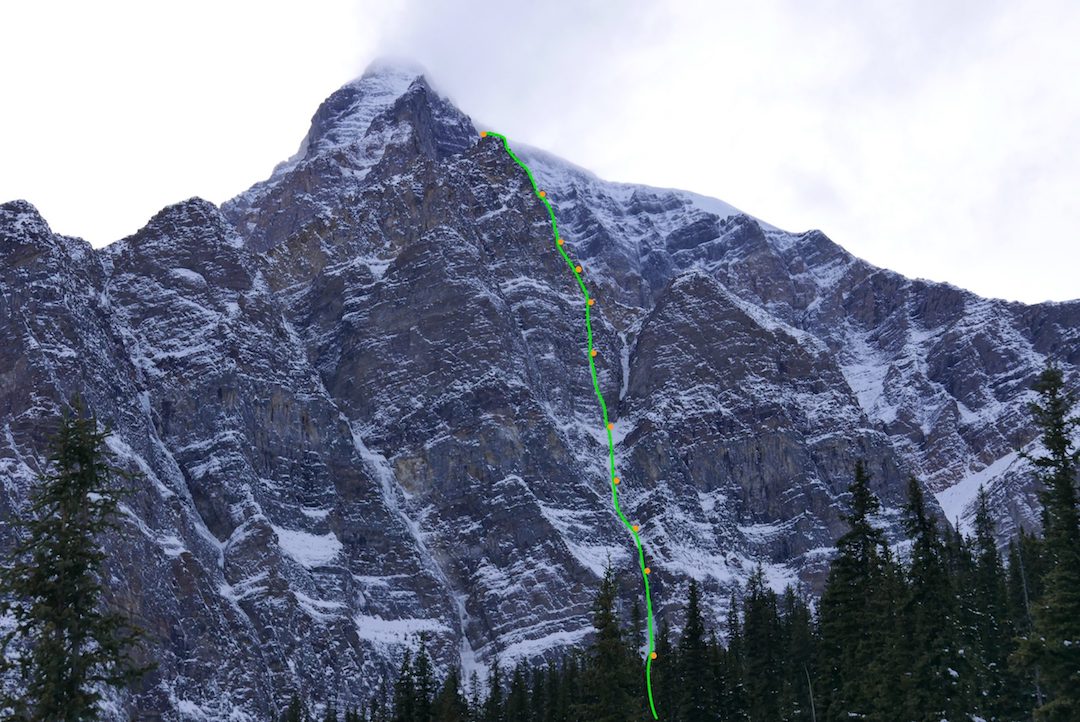 The line of Eye of the Storm (700m, M6 WI5) on the lower north face of Storm Mountain.
Maarten van Haeren 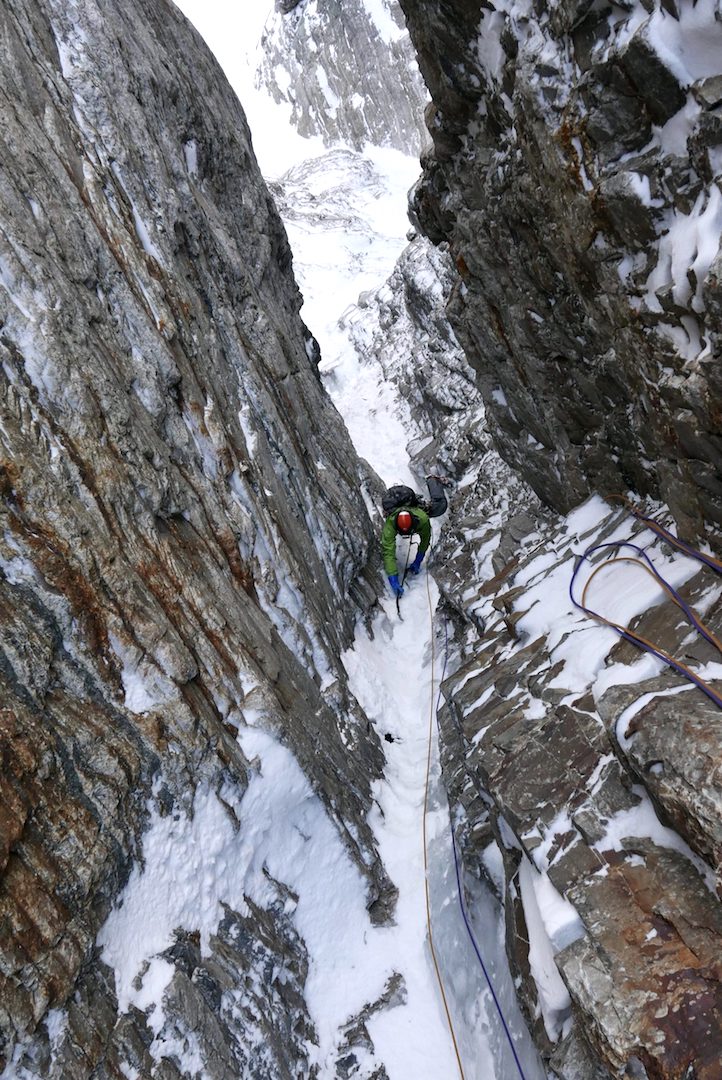 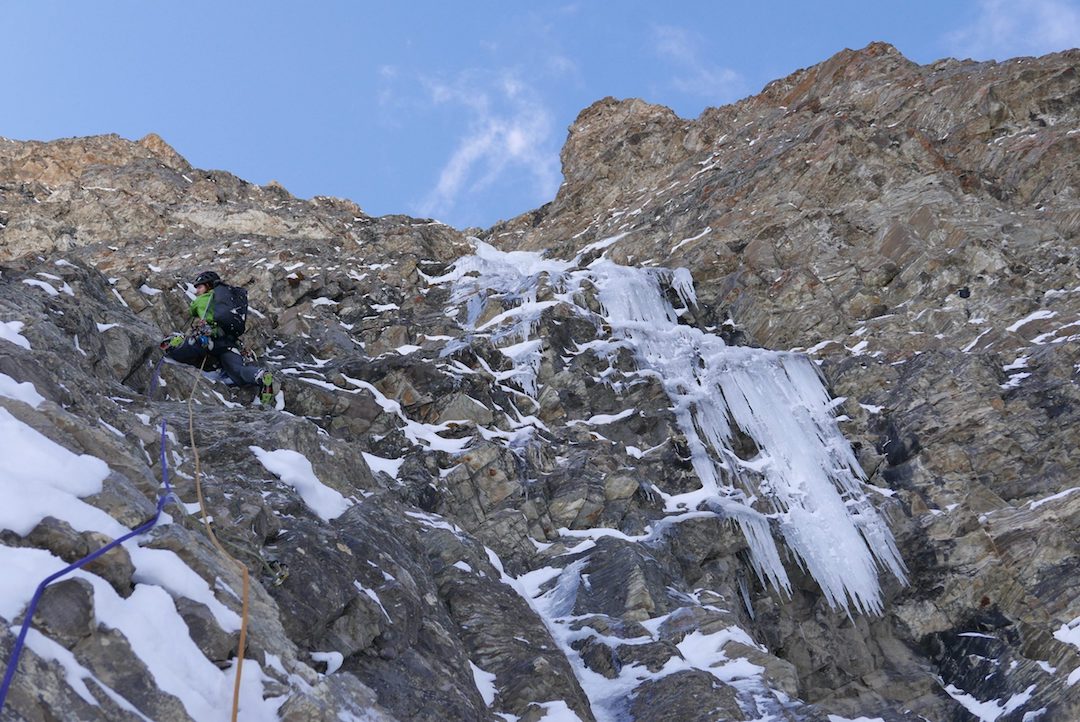 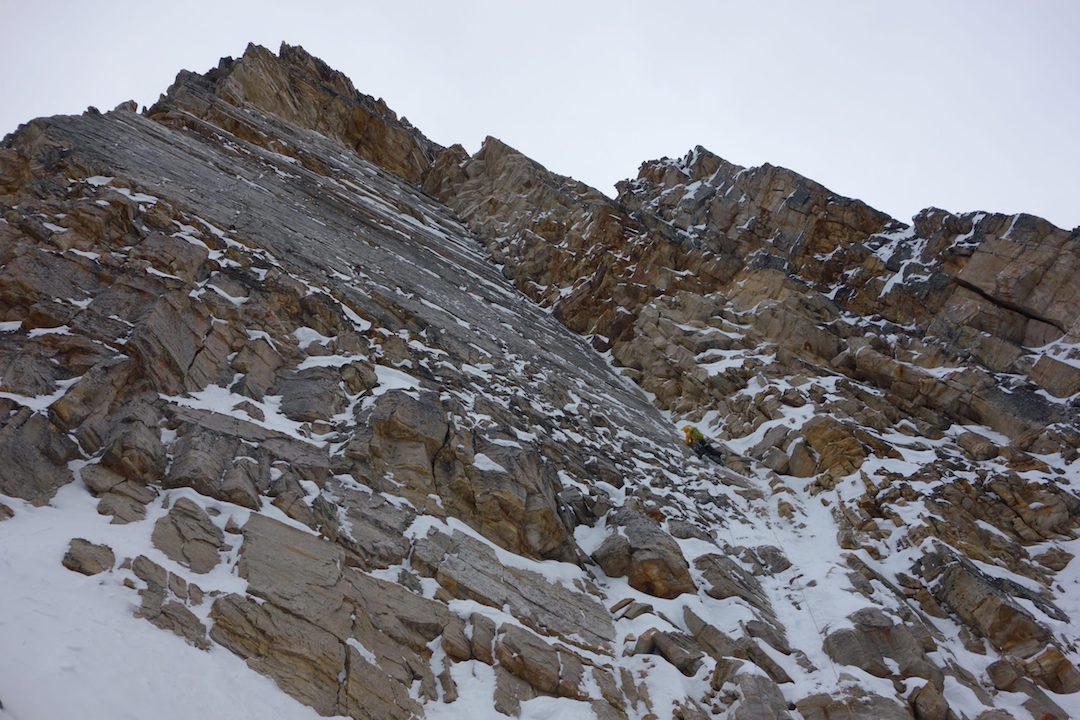 Maarten van Haeren starting up the monster dihedral on the eight pitch of Eye of the Storm.
Ethan Berman 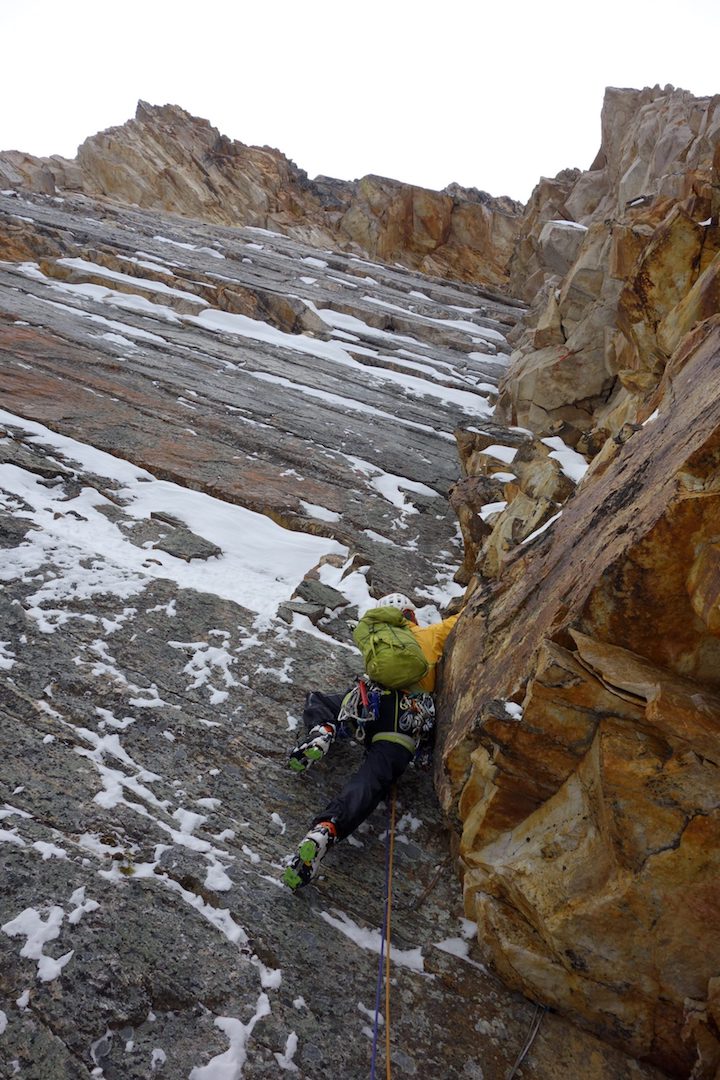 The line of Eye of the Storm (700m, M6 WI5) on the lower north face of Storm Mountain.
Maarten van Haeren

Maarten van Haeren starting up the monster dihedral on the eight pitch of Eye of the Storm.
Ethan Berman