Tim Banfield, Quentin Roberts (both Canada), and I arrived in Nepal in mid-September after a hectic time picking an objective. Our first plan had been to try the north face of Chamlang, but that was climbed in spring. Our second idea, climbing in Kashmir, no longer looked particularly safe or practical, so our third plan was the unclimbed north pillar of Tengkangpoche (6,487m).

We spent a few weeks acclimatizing in the Khumbu, but a long monsoon and, in my case, a week-long fever allowed no climbing before the end of the month. Quentin and Tim got to 6,100m on Cholatse, whereas I spent only one night at 5,600m before descending. After recuperating in Namche, we moved to the beautiful village of Thengpo (4,350m), opposite the north face of Tengkangpoche.

Early in the morning of October 11, Quentin and I approached the foot of a ramp that had been spotted by Alan Rousseau and Tino Villanueva, two friendly Americans climbing nearby Tengi Ragi Tau. The ramp skipped the lower moss-covered and snow-free part of the pillar, slanting left from a point below the smooth pillar where the Anthamatten-Steck route (Checkmate, 2008) slants right. We carried food for seven days, gas for nine, pitons, a double rack, a single rope, a 6mm tag line, and a light tent, all packed into our two 45-liter packs. We still had to climb some frozen turf, but following the ramp route we passed our planned bivouac spot early, continuing until 2 p.m., when we reached something better at an altitude of 5,400m.

Our second day gained only 150m, diagonaling left to the base of the headwall at 5,550m. The climbing was similar to the north face of the Grandes Jorasses, with thin ice ramps and tricky mixed slabs offering plenty of action. The second carried a bigger pack but still climbed everything free.

When the morning sun hit the headwall next day, we launched. This was definitely Quentin's terrain. He fluently free climbed, aided, and climbed mixed terrain, sometimes all in the same pitch. The sunlight quickly disappeared from the face, but Quentin kept rock shoes on for a long time after. We passed the 2006 high point of Canadians John Furneaux and Matt Maddaloni at around 5,600m, the highest rap anchor we found. They had spent nine days reaching this point more directly—we had spent two and a half on our line. The way ahead was now completely virgin.

Soon, the cracks were filled with ice and took a long time to climb. We hauled both packs, and I jumared. It got dark at the top of the seventh pitch on the headwall, and when I reached Quentin, belaying under a small overhang, he suggested bivouacking. We sat, our legs hanging free, the tent covering our bodies while spindrift poured all around. It would be a very uncomfortable night.

Next morning it was my turn. The angle kicked back and the ice was finally climbable. The next few pitches were probably the best quality on the route. At 5,880m we cut a poor tent platform on a snow ridge, and the next day we rested. The night on the headwall had taken a lot out of us, and we thought that staying still, eating, and rehydrating would help. It did, but it also took away some of our motivation after so many days on the wall.

In the afternoon, Quentin climbed a 50m pitch and fixed a rope, battling the hardest, most bizarre pitch so far. It was scary to watch. There were still many question marks, though it appeared the main difficulties were below us. The next day we would try for the summit ridge, and the top the day after.

Day six, October 16, dawned cold. The sleeping bags were now wet, and I had stomach problems that luckily responded to medicine. Above our high point, Quentin tackled a snow ramp, hoping to find features or ice that would lead to the next snow ramp and then to snow-covered slabs just below the ridge. There was nothing. What we had seen from the village as ice had probably just been snow, now blown away by the wind. The altitude was 5,930m and the rock ahead compact, completely devoid of cracks and unclimbable by pure means. Everywhere around us looked the same. Maybe sometimes there is ice, maybe not. Maybe there is another way, maybe not. The crux turned out to be right at the top of the pillar after all. Thus far, we had encountered difficulties up to 5.11 A3 M7.

We managed to leave only minimal pitons, wires, and cords on the rappel descent; they should be quite easy to add to the rack when another team comes to try this beautiful pillar. We truly hope that future parties respect the mountain and also climb in alpine style, without a drill or bolts. The expedition received financial support from the Austrian Alpine Club and with a John Lauchlan Award and Finnish Alpine Award. [An interview with Quentin Roberts was featured in episode 26 of the AAJ’s Cutting Edge podcast—see below.]

The Cutting Edge · A Proud Failure: Quentin Roberts on Tengkangpoche 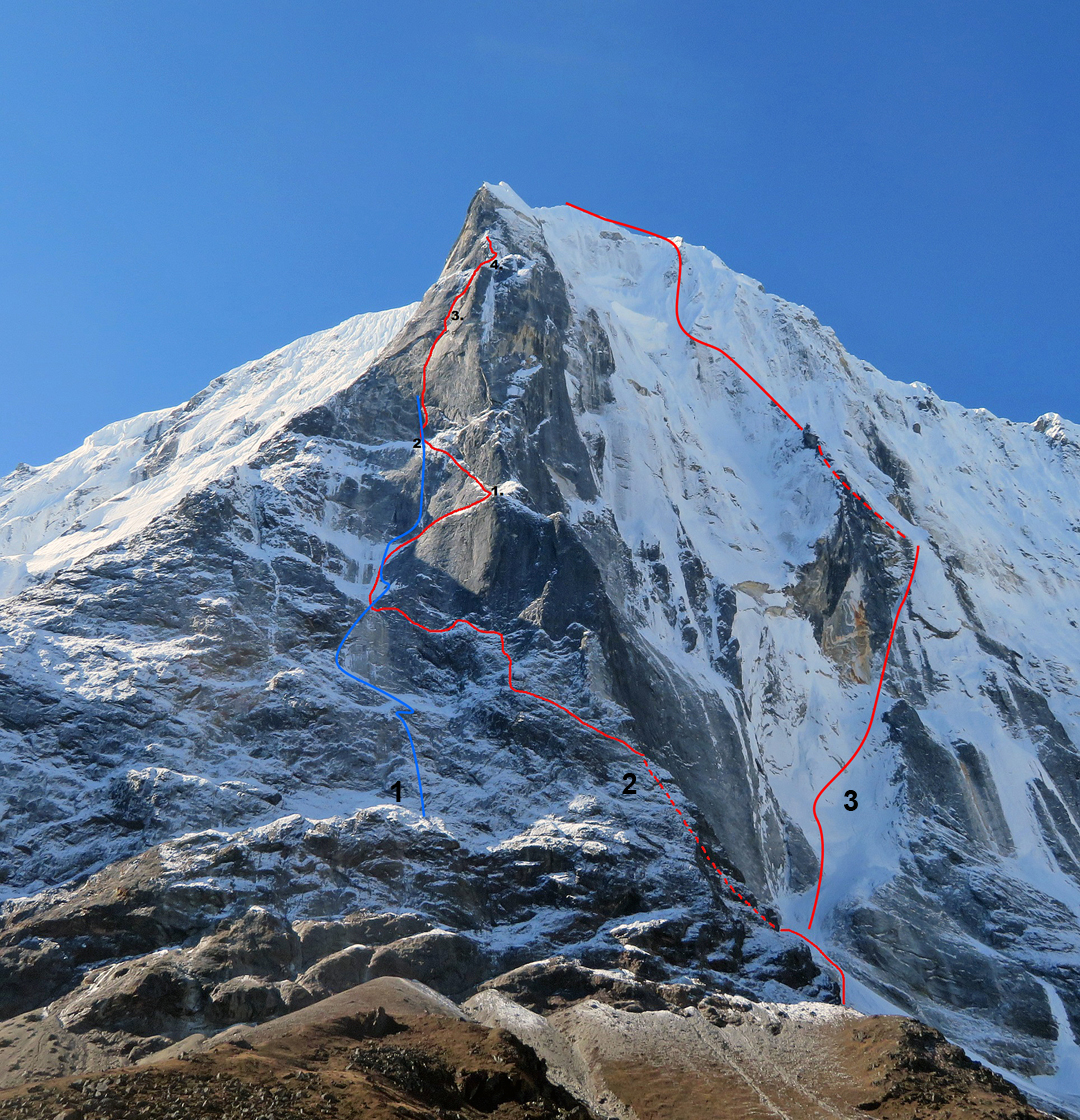 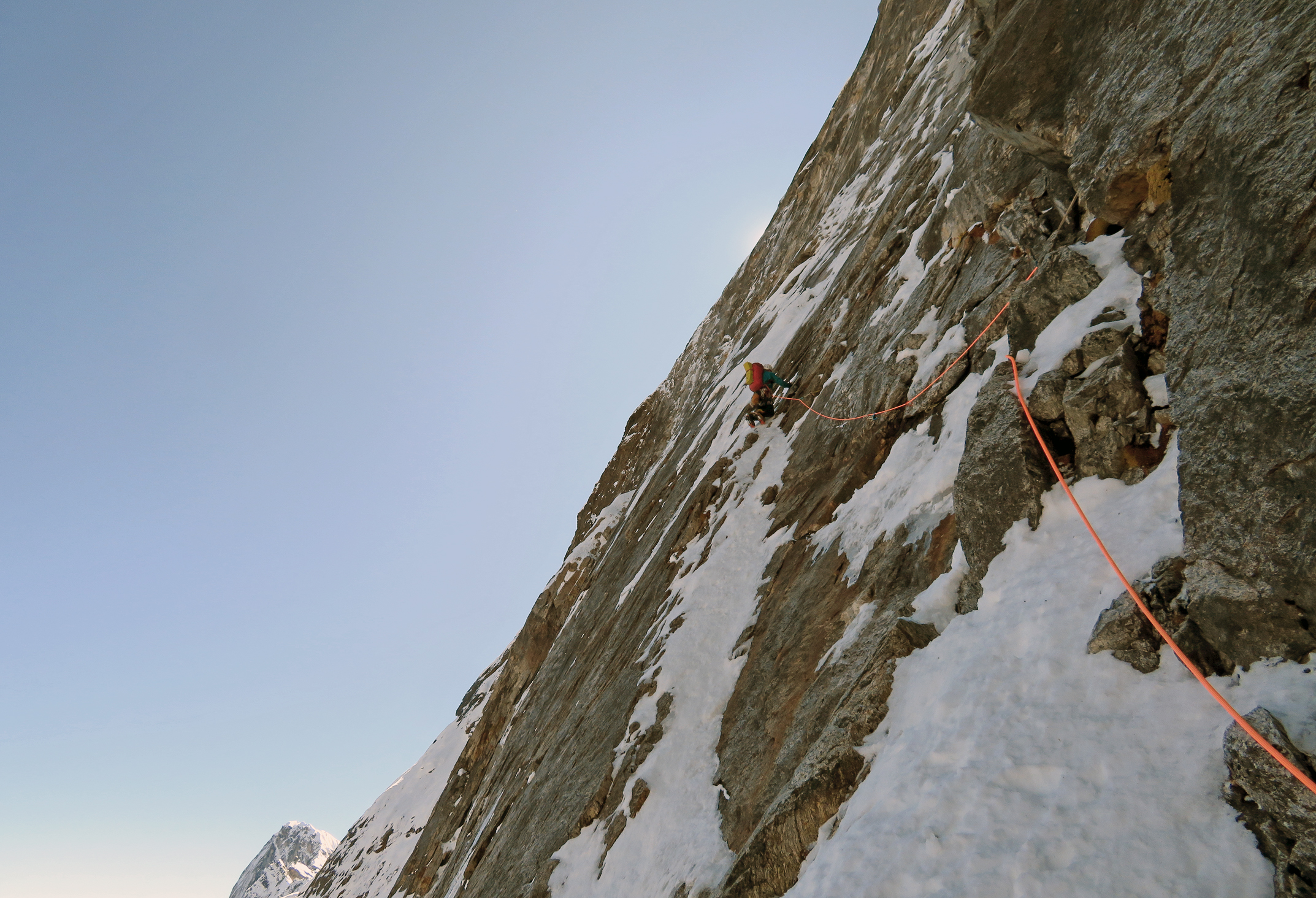 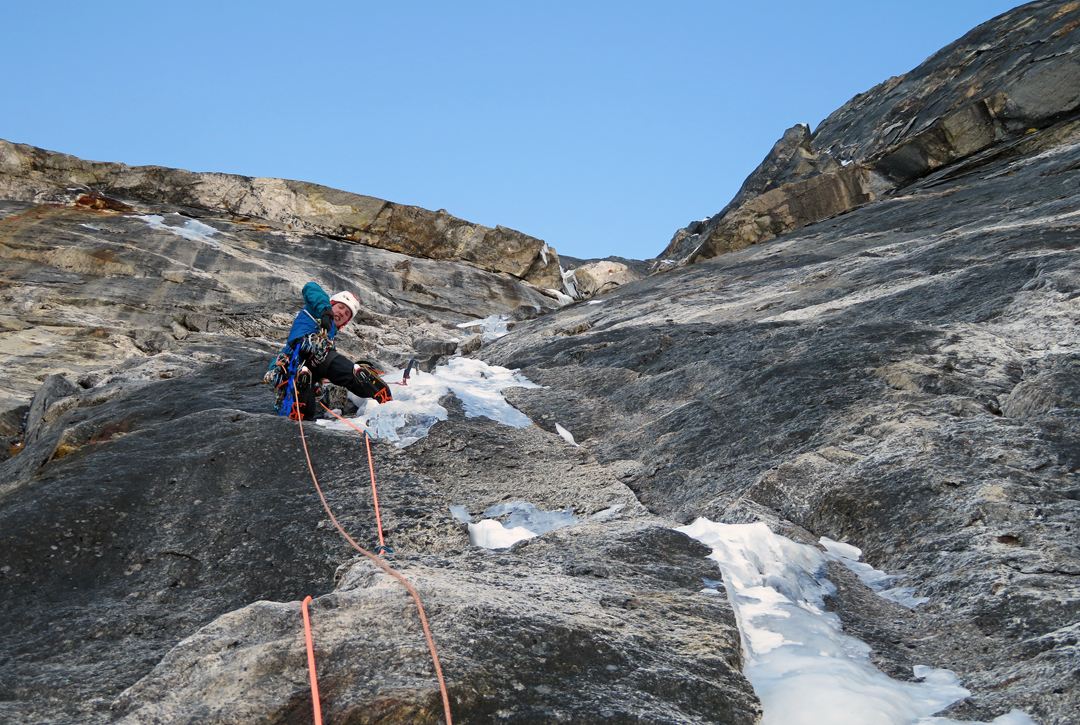 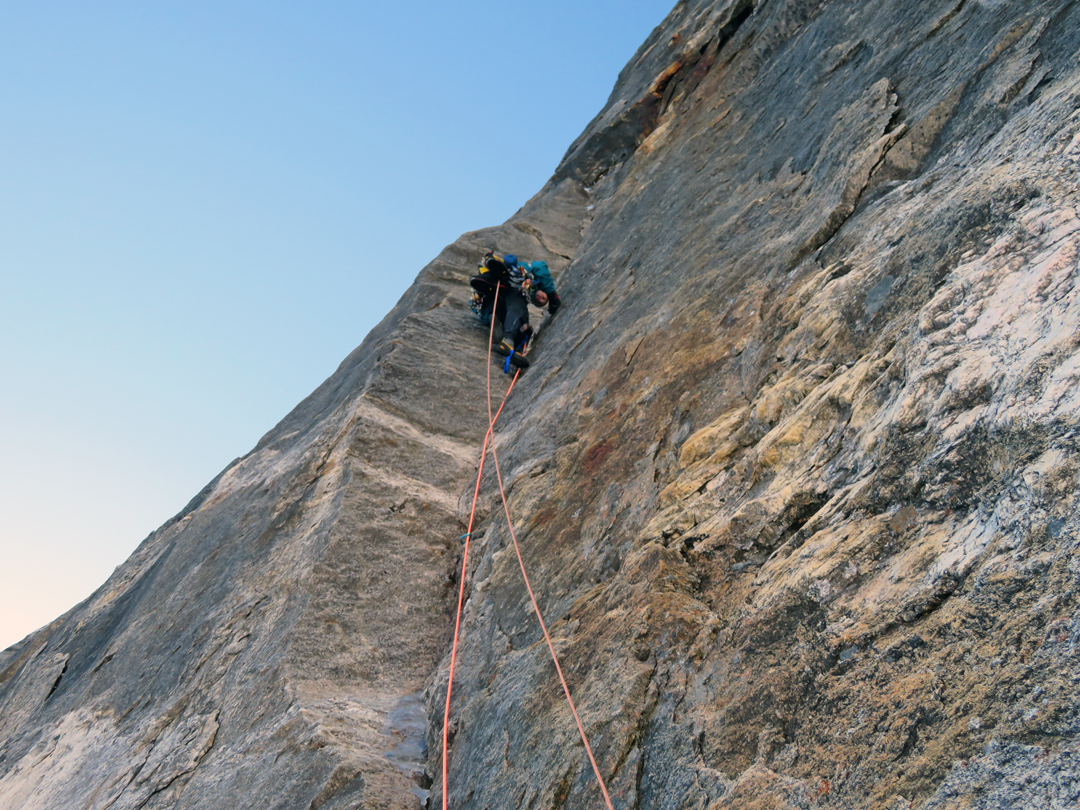 Quentin Roberts aiding thin cracks at 5,600m on the headwall of the north pillar of Tengkangpoche. This pitch was the high point of the 2006 Canadian attempt.
Juho Knuutilla 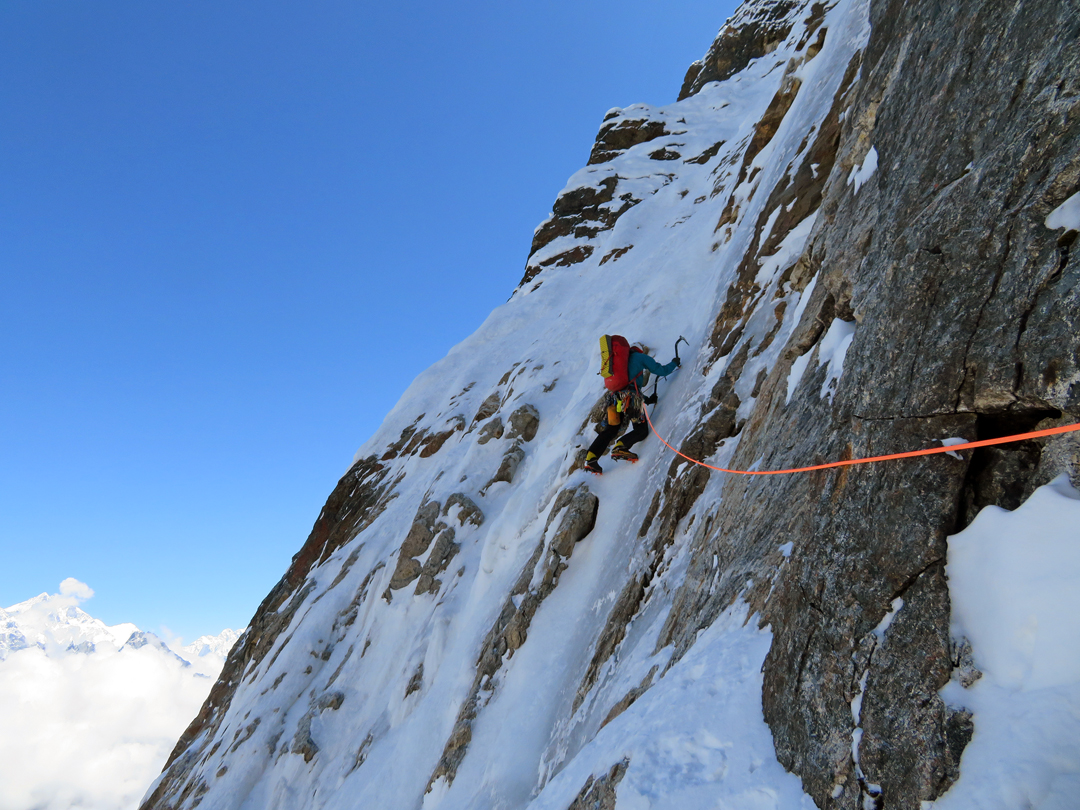 Quentin Roberts climbing straightforward ice on the first day of the attempt on the north pillar of Tengkangpoche.
Juho Knuutilla 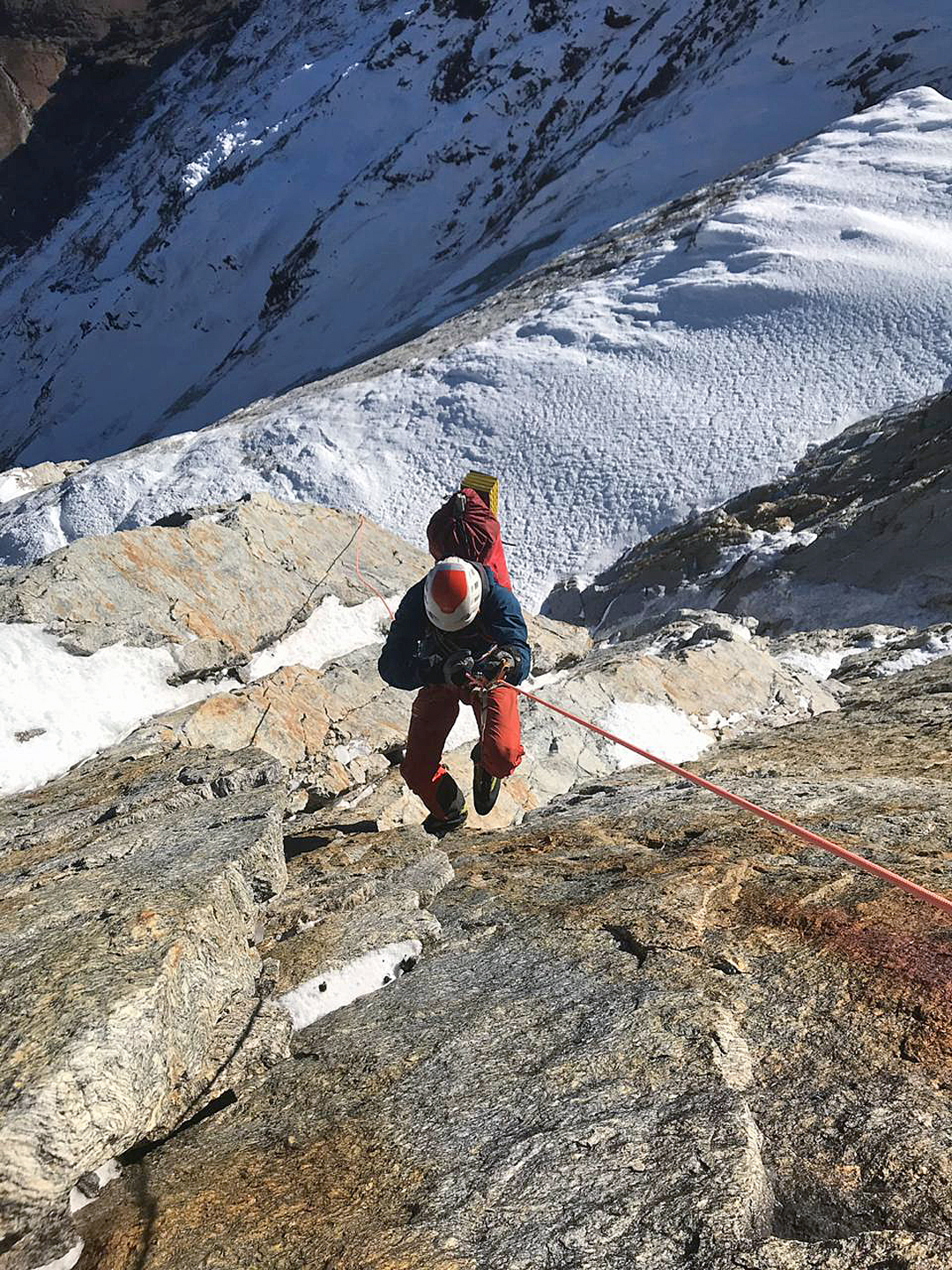 Juho Knuutilla jumaring on the headwall of the north pillar of Tengkangpoche.
Quentin Roberts
Previous Next

Quentin Roberts aiding thin cracks at 5,600m on the headwall of the north pillar of Tengkangpoche. This pitch was the high point of the 2006 Canadian attempt.
Juho Knuutilla

Quentin Roberts climbing straightforward ice on the first day of the attempt on the north pillar of Tengkangpoche.
Juho Knuutilla

Juho Knuutilla jumaring on the headwall of the north pillar of Tengkangpoche.
Quentin Roberts
Previous Next