We arrived in Kathmandu on September 10 and heard that an Italian-Swiss expedition was also due to attempt Panpoche I (see editor’s note below). Giorgi, Baqar, and I trekked over the Larkya La toward Samagaon village and reached base camp below Panpoche at 3,880m. On the 20th we began climbing the previously unknown southwest ridge of Panpoche II. After 600m we were able to see the whole of the mountain for the first and last time. It looked possible to climb it in two or three days, so we left behind some equipment and food, and continued light and fast. Fast seemed a good idea, as the forecast was never promising: In fact the weather was unpredictable throughout our stay, with rain or snow on almost every day.

We continued up the ridge, which proved extremely loose, sharp, and unprotectable. However, our long-term experience on loose terrain gave us courage to continue. After a total of 1,900m, we reached the only spot on the ridge that would take a tent. The altitude was 5,780m and there began a long spell of snowfall.

Next morning we set out in very poor visibility, and after a difficult, near vertical pitch we realized that this was not the way. To the right, the funnel-shaped south-southwest face looked to provide a better option. We crawled inside the tent and remained there until the following morning, when snowfall decreased and we decided to make a summit push.

We traversed right, then down, to reach the snow funnel. Due to warm conditions, snow cover was relatively thin and flimsy over sloping rock barriers. We simul-climbed the 900m face as calmly as we could, overcoming long stretches of 60° and sections up to 80°. At 5 p.m. on September 22 we gathered on the summit and briefly enjoyed a clear panorama of the surrounding mountains at sunset. We became thoughtful. Envisioning a descent of the poorly protected sections in the dark took our smiles away—yes, even from cheerful Georgians.

After six hours, four rappels, and much downclimbing, we reached our bivouac gear, which we had cached at the start of the funnel at around 5,720m. Dehydrated, we dug a bivouac site, had a three-hour nap, and woke to sunshine in an exceptionally good mood. We opted to continue straight down the central couloir on the face, negotiating rock barriers with poor snow coverage and flowing water. By evening we had regained base camp.

This ascent was slightly different from our previous climbs in Asia. To sum it up, it was hard and very intense. From where we started climbing, our route was 1,700m, ED 80°; from base camp around 2,600m.

We now moved our base camp to 4,300m in the uninhabited Samdo Valley for an attempt on the northeast ridge of Panpoche I. The Japanese had spent many days on this route in expedition style, retreating from the blade-like corniced summit ridge. We had seen part of this from Panpoche II and knew it would be the crux.

On September 30, after another intense bout of bad weather, we set off with relatively light packs, braking trail on the snow-loaded Sonam Glacier to a col at 5,580m on the northeast ridge. This is on the border with Tibet, and is the same place the Japanese had placed their Camp 2 in 2009.

Another day in strengthening wind brought us to our second bivouac on the ridge at 5,860m. On the third day route finding was trickier, and slopes heavily loaded. We had a grueling time before reaching the pinnacle at Point 6,335m. [This point was given the name Samdo and brought onto the permitted list in 2003 as an unclimbed peak; it was climbed in 2009 by the Japanese.] That day we had almost voted to retreat due to avalanche hazard. We camped, having decided we could reach the summit of Panpoche I next day, although it still seemed a long way to the southwest.

On October 3 we started our summit push. The weather was cold and clear, and after five hours we had reached the start of the "blade." We sent avalanches down to the right and loose rock to the left. The only protection if someone fell off was to jump down the other side of the crest. We therefore climbed slowly and steadily! Three hours of difficult work led to a point where we could—due to the narrow, limited space—go up to the summit only one by one.

After such stressful work we had great emotions (and a small sip of cognac), but then we had to go down. Before sunset we had reached our last bivouac, and the following day reversed our route to base camp. Our 2,300m route from base camp was ED 70° in numbers and symbols, but so much more in reality. Both ascents had required a coordinated team with extremely focused attention in order to deal with complex route-finding, weather conditions, and our mood swings.

Editor's Note: After a successful ascent of nearby Manaslu, Marco Camandona, François Cazzanelli, Emrik Favre, Francesco Ratti (all Italy) and Andreas Steindl, (Switzerland) attempted the west-northwest ridge of Panpoche I, which eventually gains the north ridge before the start of the "blade". They retreated at 5,800m. 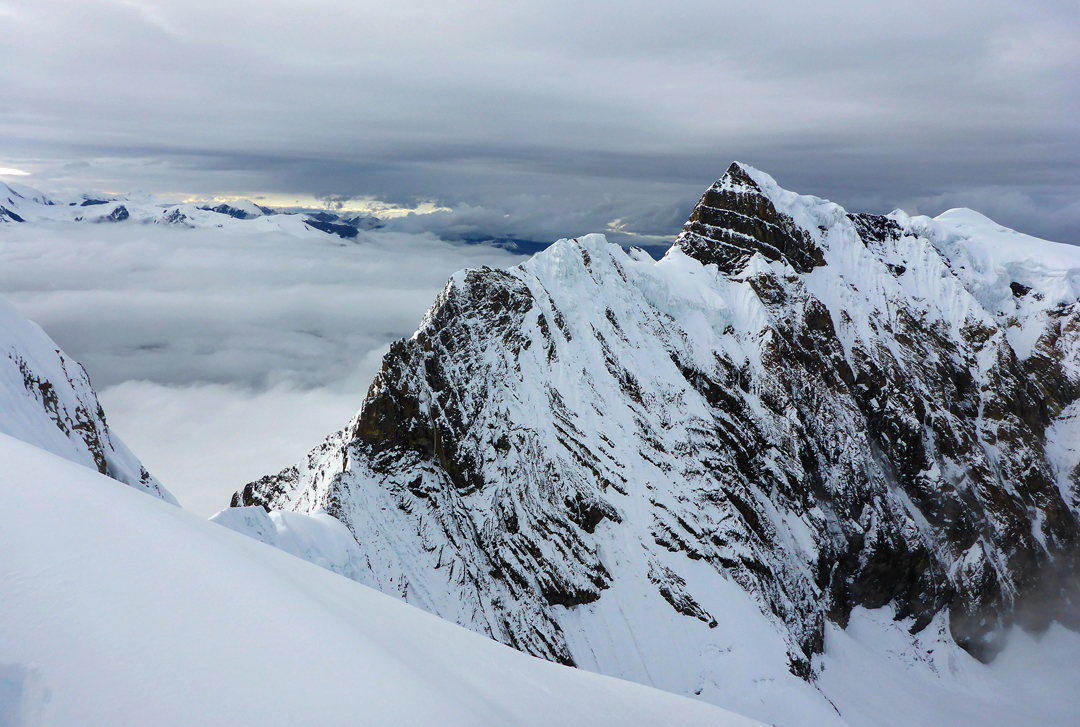 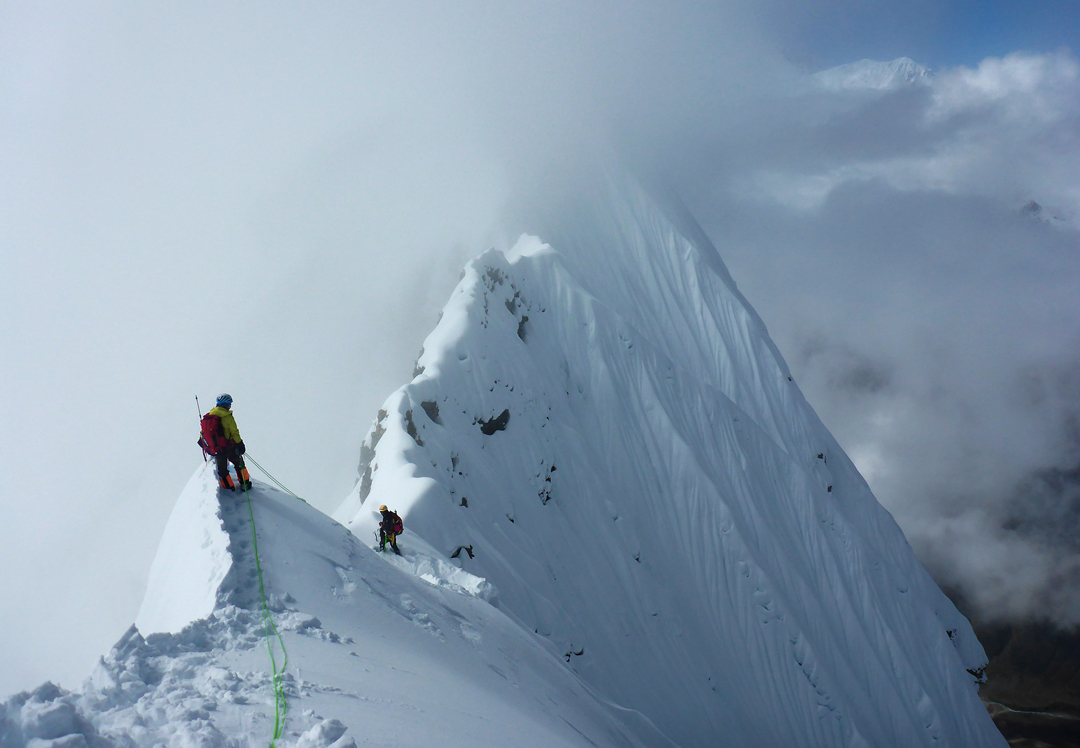 Starting the crux “blade traverse” at 6,520m, heading toward the summit of Panpoche I.
Archil Badriashvili 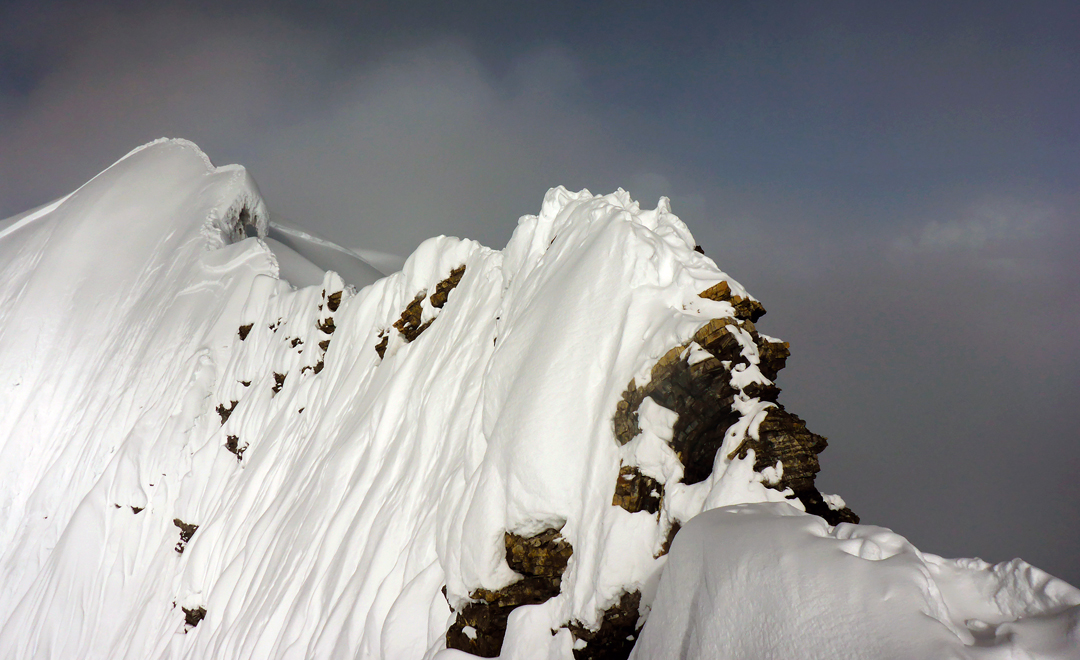 Looking back along part of the crux summit ridge of Panpoche I.
Archil Badriashvili 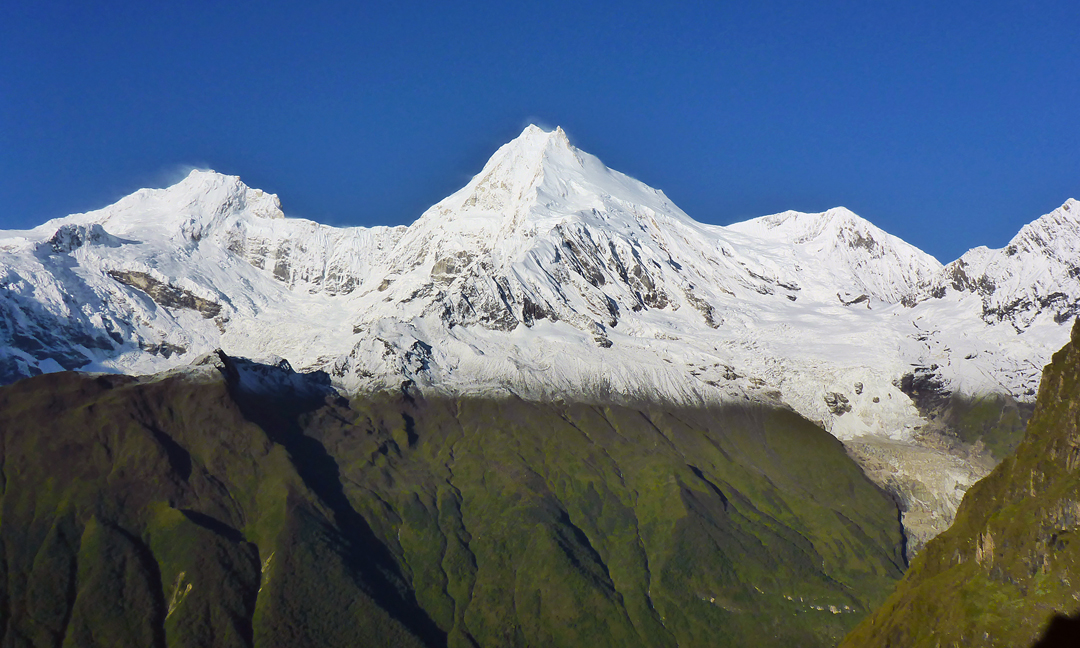 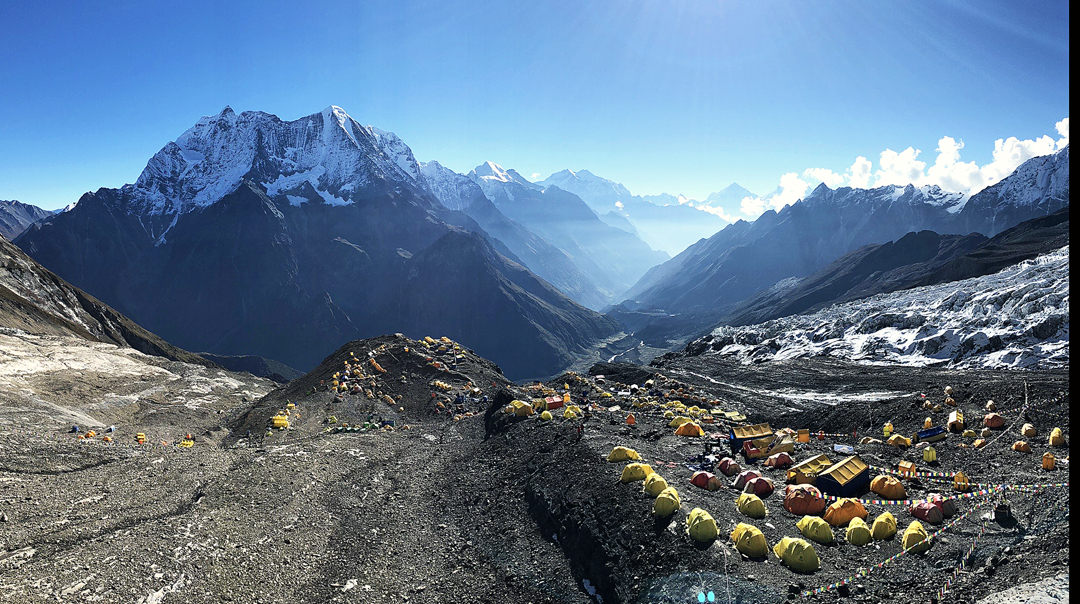 The Panpoche peaks from Manaslu Base Camp: Panpoche I is the triangular rock pinnacle toward the left end of the ridge; Panpoche II is the snow dome at the right end.
Mingma David Sherpa 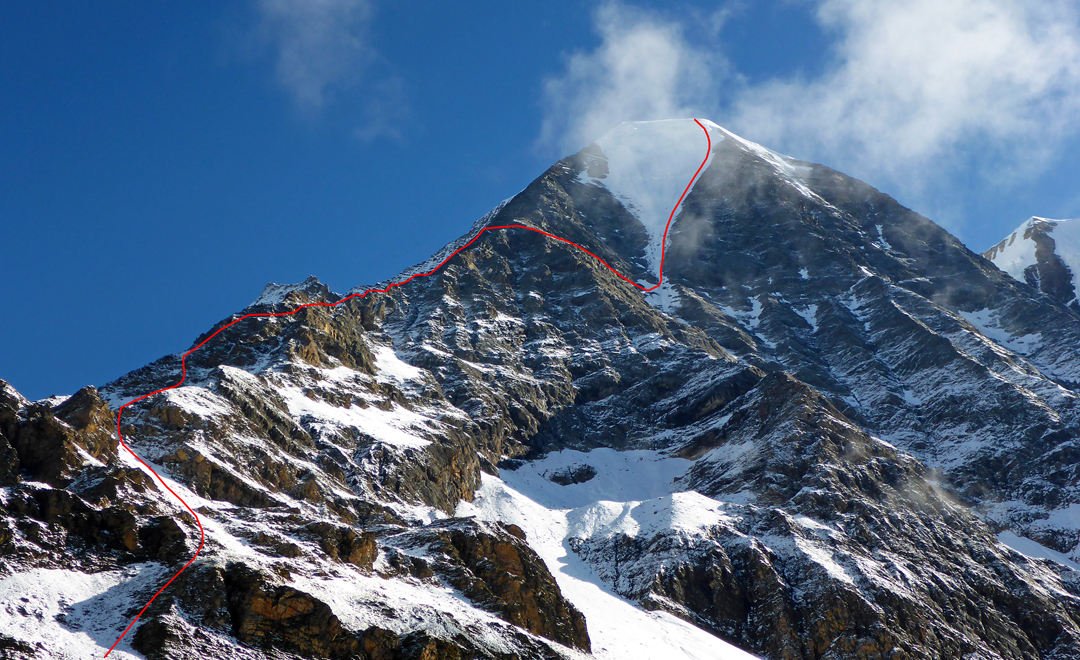 The Georgian Route on the southwest ridge and south-southwest face of Panpoche II.
Archil Badriashvili 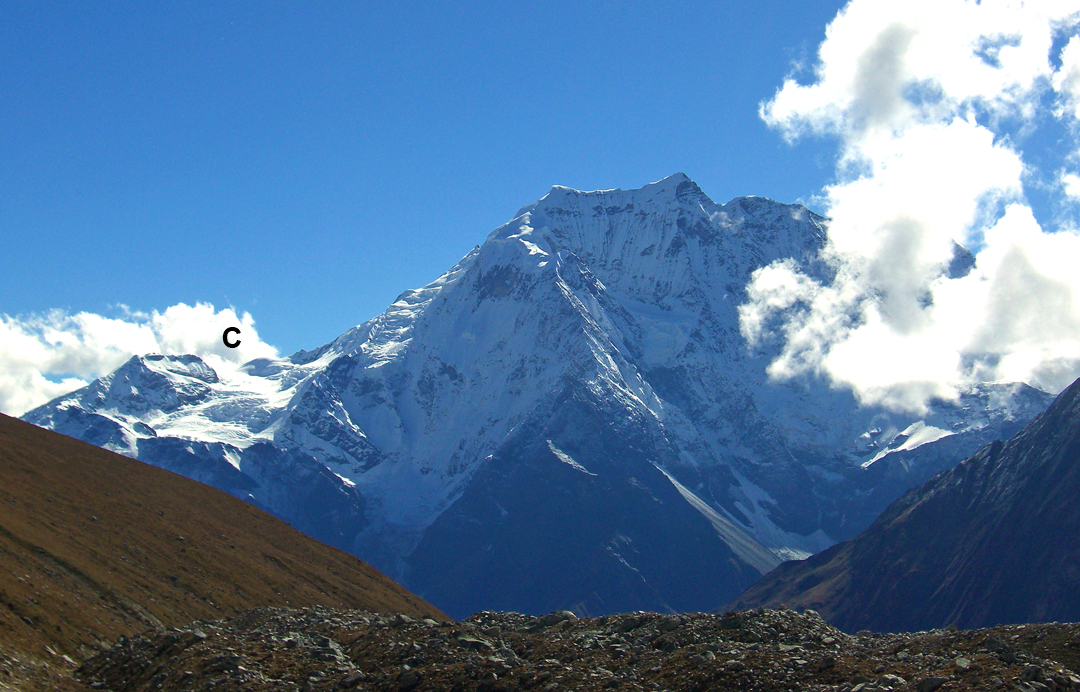 Panpoche I from the northwest. The northeast ridge is the left skyline. (C) marks the site of the first Georgian bivouac, on Col 5,580m, above the Samdo Glacier.
Yusuke Kuramoto
Previous Next

Starting the crux “blade traverse” at 6,520m, heading toward the summit of Panpoche I.
Archil Badriashvili

Looking back along part of the crux summit ridge of Panpoche I.
Archil Badriashvili

The Panpoche peaks from Manaslu Base Camp: Panpoche I is the triangular rock pinnacle toward the left end of the ridge; Panpoche II is the snow dome at the right end.
Mingma David Sherpa

The Georgian Route on the southwest ridge and south-southwest face of Panpoche II.
Archil Badriashvili

Panpoche I from the northwest. The northeast ridge is the left skyline. (C) marks the site of the first Georgian bivouac, on Col 5,580m, above the Samdo Glacier.
Yusuke Kuramoto
Previous Next