Together with Zakir Abduraimov, Kolya Ovchinnikov, Grisha Schukin, and Max Ten, I spent August in the Chon-turasu Valley. This is the limestone region at the eastern end of the Western Kokshaal-too, and unlike the well-known granite monoliths in the west, the rock here is either compact or very brittle.

The first exploration of the Chon-turasu took place in 1932, when I. Maron and A. Mashkov from August Letavet’s expedition climbed Pik Marona (4,902m). Most of the mountains here were climbed from 1957–’60, a period when all the lower peaks received ascents and were named. Dankova (5,982m), the highest in the range, was climbed in 1970 from the Grigoryev Glacier by Yuri Popenko and team as the endpoint to a long traverse from False Chontura. Pik Koroleva (5,816m) was climbed in 1969 via the west face and north ridge, while Pik Chon-turasu (5,728m) was not climbed until 1997, when it was ascended by the icy south face at 5A (F. Ahmatov and team). Foreign visits were impossible in the Soviet era due to the proximity of the Chinese border, so it wasn't until 1996 that Western climbers entered the area in the form of a joint French-Russian team. An International School of Mountaineering (ISM) expedition, led by Pat Littlejohn, came in 1997.

We drove from Almaty to Bishkek, then onward, using the agency of Pro Hunt, via Naryn and Akmuz to reach the Chon-turasu Valley. Next morning, Max and I climbed Pik 4,685m and our three friends climbed Gorelik. Littlejohn's team climbed Gorelik in 1997 and called it Sababah (4,785m), thinking it was a first ascent, however it was climbed by Russians in the late 1950s.

The next step in our acclimatization was Pik Marona, where we spent a night just below the summit. On our return, base camp looked raped. Two of the three tents were ripped, food chewed, and tins bent. Well, it was our fault—we had left camp fully stocked and a bear had raided it.

Next night, Kolya spotted the bear. We screamed and threw rocks, and the bear went away. Eventually, we dived into our tents to sleep, but in a few minutes heard noise from the dining area. Out we went again and drove the bear away. We then moved the tents closer, just to be near to friends. I was almost asleep when I heard Max say, "Make some noise!" The bear took a corner of his tent and started to drag it away. We shouted loudly. The bear was sitting 15m away, almost laughing at us trying to force him out. After a while, it went away and never appeared again. However, we spent next morning moving our camp to the biggest bear-proof boulder we could find.

On August 9, Max and I went for our main objective, the unclimbed north face of Chon-turasu. [Russian climbers attempting a line on or near the north face in 1996 were prevented by a corniced ridge from reaching the summit. Further details are not available.] Our three friends went for the north ridge of Pik Trapez (5,240m, first climbed from the southeast in 1996). The central part of the north face of Chon-turasu is defended by a frighteningly active icefall, in the middle of which is a 15m-wide groove. This was the route taken by falling seracs—and, unfortunately, also us. We climbed as fast as possible to a vertical ice wall, which led to an icy couloir that collects all the debris from the central part of the face. Once up this we crossed a gently sloping hanging glacier to the right and put our tent in a safe place on rocks. During the night it snowed 5cm.

Next day, five pitches of steep ice runnels, full of spindrift, incorrectly led to us thinking we had reached the wide snow slope in the upper third of the face. We slanted left for five more pitches until I dead-ended at steep rock walls. An Abalokov thread allowed me to descend to thick ice, where we hacked out two ledges and settled down for the night, me in a bivouac bag and Max wrapped in the tent, looking like a nylon-covered maggot.

On the third day we made a rising rightward traverse to get to the actual snow slope on the upper face. Somewhere above was a depression cutting through the rock barrier directly below the summit. That morning, the screws had only penetrated a few centimeters, but I wasn't too worried as the climbing was easy. Now I was faced with a 70° corner comprised of strange rock—monolithic with very thin cracks. Rock pitons crumbled the limestone. In front of my face I saw a beautiful shell imprinted into the rock. But I didn't need shells, I needed a crack. When I reached a snow-covered slab without protection, I searched for a piece of ice thick enough for an Abalakov, then bailed. As Max didn't want to try it, we started on what eventually became a 400m traverse to the left to reach a couloir of thick ice. Five pitches, where even 22cm screws didn't bottom out, led us to the ridge. At 8 p.m. we set up our third bivouac.

On the 12th we started long before dawn in cold, windy weather. The east ridge was gently angled but corniced, and we had to traverse the southern flank, not without incident, to arrive on the summit cone at 8:30 a.m. The 1,000m triangular northeast buttress of Dankova loomed to our left. To descend, we went down the west ridge and northwest flank, easy at first until we turned northwest, where the terrain became steeper. Eleven rappels over loose terrain down the west side of the north face brought us to the hanging glacier we had left a couple of days ago. In just one hour we rappelled and downclimbed as fast as we could through the icefall to reach the glacier below. Three hours later we were in base camp.

In the meantime, our friends had climbed over the minor summit of Pik Skala at the end of the north ridge of Trapez, but then found the continuation much more complex than anticipated, and retreated. After this, bad weather prevented anything more than a couple of easy summits near base camp, first climbed in 1969. 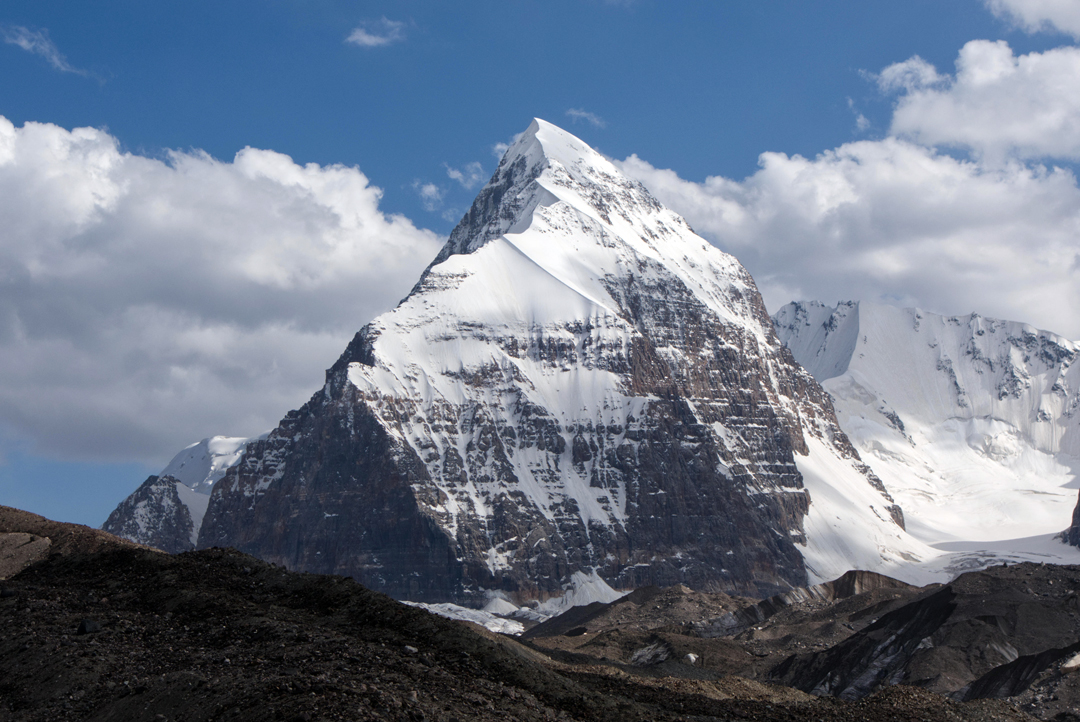 Pik Alpinist (5,492m) seen from the Korzhenevskogo Glacier to the north.
Kirill Belotserkovskiy 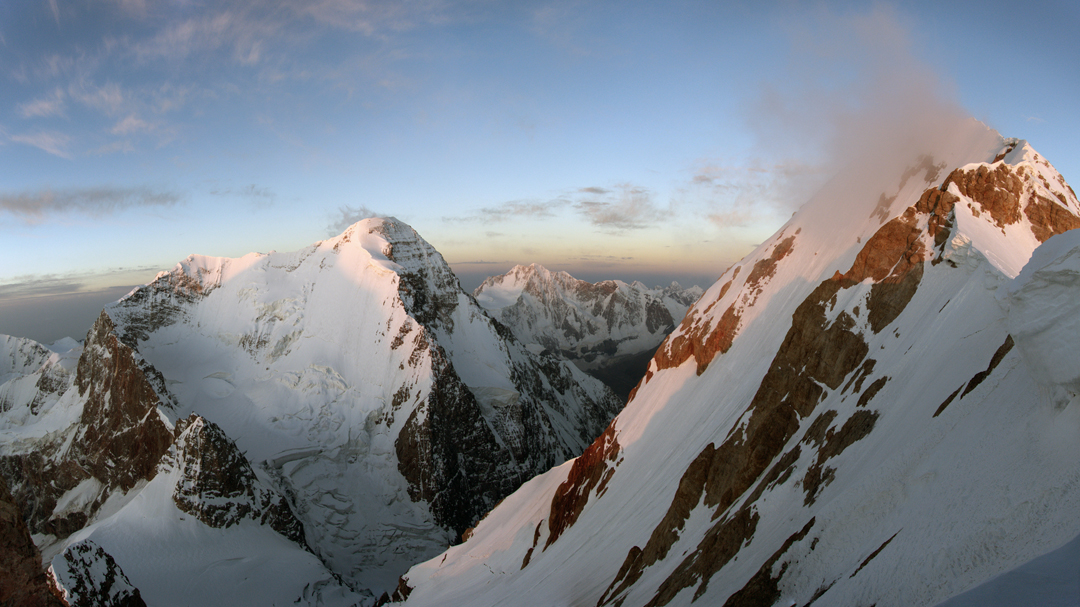 Looking south-southwest from the third bivouac site on Chon-Turasu at the north side of Dankova (5,982m), and to the right, in the far distance, Pik Kosmos (a.k.a Schmidta, 5,940m).
Kirill Belotserkovskiy 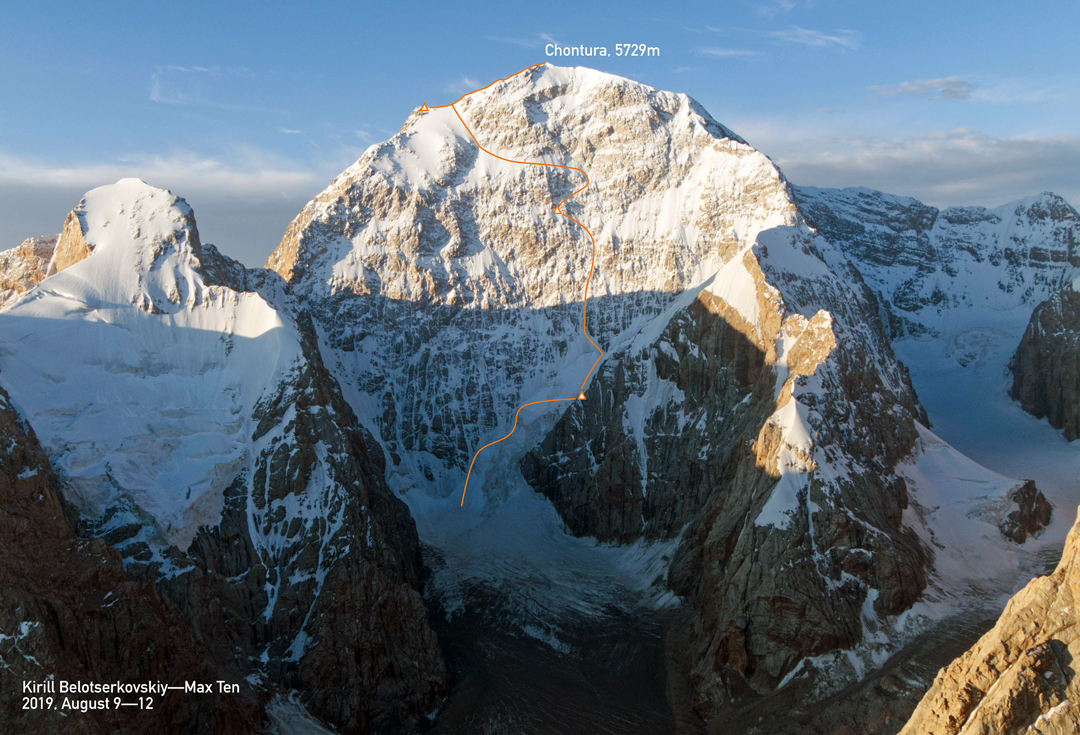 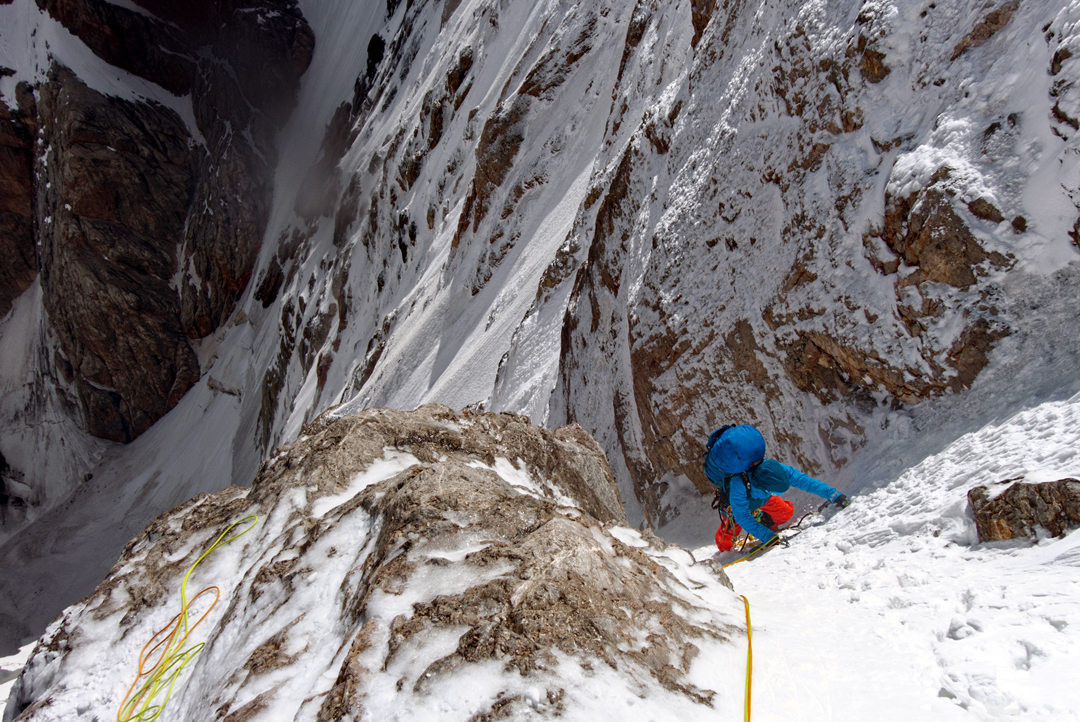 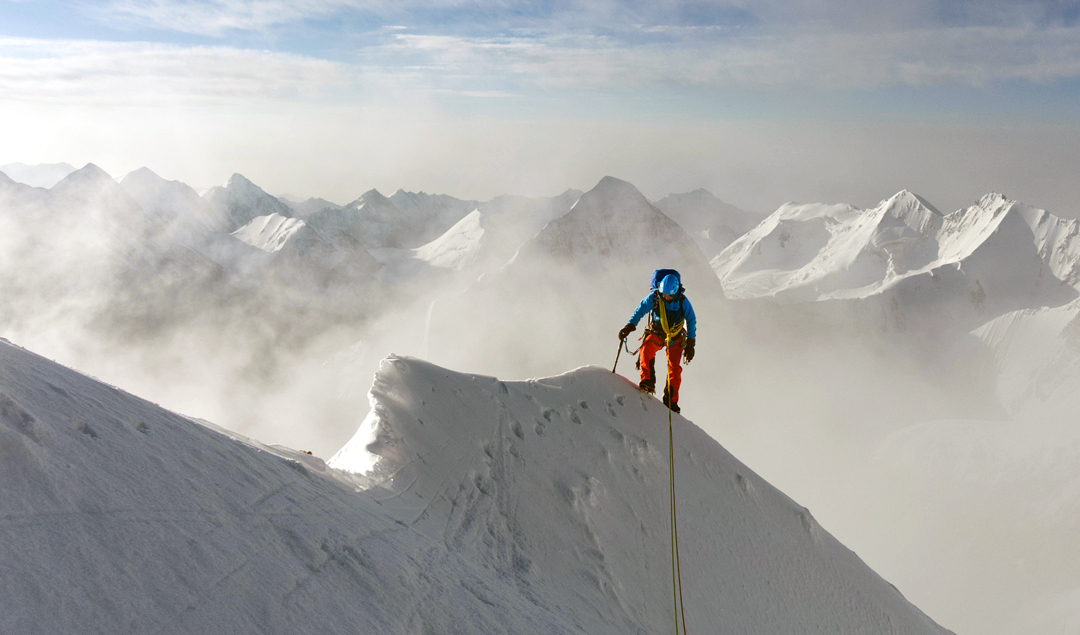 Pik Alpinist (5,492m) seen from the Korzhenevskogo Glacier to the north.
Kirill Belotserkovskiy

Looking south-southwest from the third bivouac site on Chon-Turasu at the north side of Dankova (5,982m), and to the right, in the far distance, Pik Kosmos (a.k.a Schmidta, 5,940m).
Kirill Belotserkovskiy