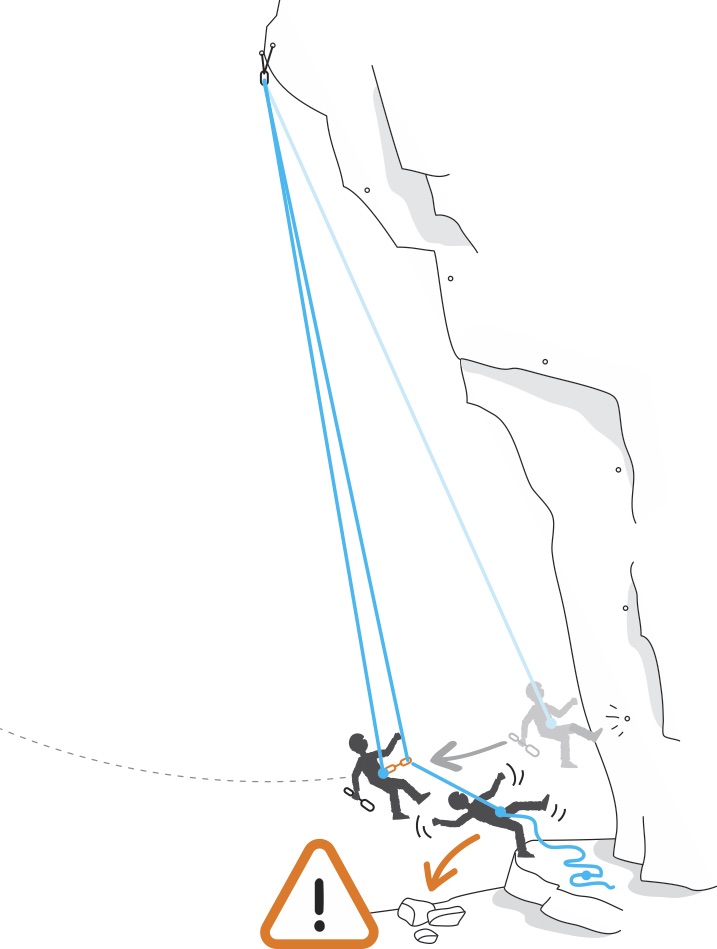 In early afternoon on September 25, Salt Lake SAR was called out to the Challenge Buttress after a male and female climber were involved in a climbing accident on Watermelon Tetris (5.9) at the Lonely Challenge sector. This 70-foot sport climb leans strongly to the right, making it difficult to clean the quickdraws from the top down. It was reported that while the male climber was being lowered from the anchors, he clipped his harness to the belayer’s strand of the rope to keep close to the line of bolts as he removed the quickdraws. At some point he unclipped the other strand and lost or let go of it; the climber swung off and pulled his belayer off the ground, causing both of them to collide with the wall. The male had what appeared to be a minor head injury, but both were able to walk out with assistance. (Source: Salt Lake County SAR.)

Routes that are significantly overhanging or lean sharply to one side are best cleaned by a climber following the route, rather than the leader lowering from the top. When this is not possible (if the second cannot follow the climb, for example), care must be taken to prevent dangerous swings or sudden drops while cleaning. If the lowering climber clips into the rope strand running through the quickdraws to stay closer to the bolt line— sometimes called “tramming in”—the belayer must be braced for a sudden load in the system each time the climber cleans a draw. Also, the climber must take care to unclip from the belay strand before cleaning the lowest bolt or else the belayer may be dragged across the ground by the resulting swing. Consider a ground anchor for the belayer.

It’s often preferable to leave the first bolt clipped when cleaning a steep sport pitch. The climber can then swing off the route a safe distance above the ground or can continue lowering to the ground with the belay strand still clipped. (Be aware that lowering all the way to the ground with the first bolt clipped requires additional rope. Tie a stopper knot.) Once the climber is on the ground, someone can climb back to the first bolt or use a stick clip to retrieve the gear. Again, the safest technique is to follow the pitch and clean it. (Source: The Editors.)