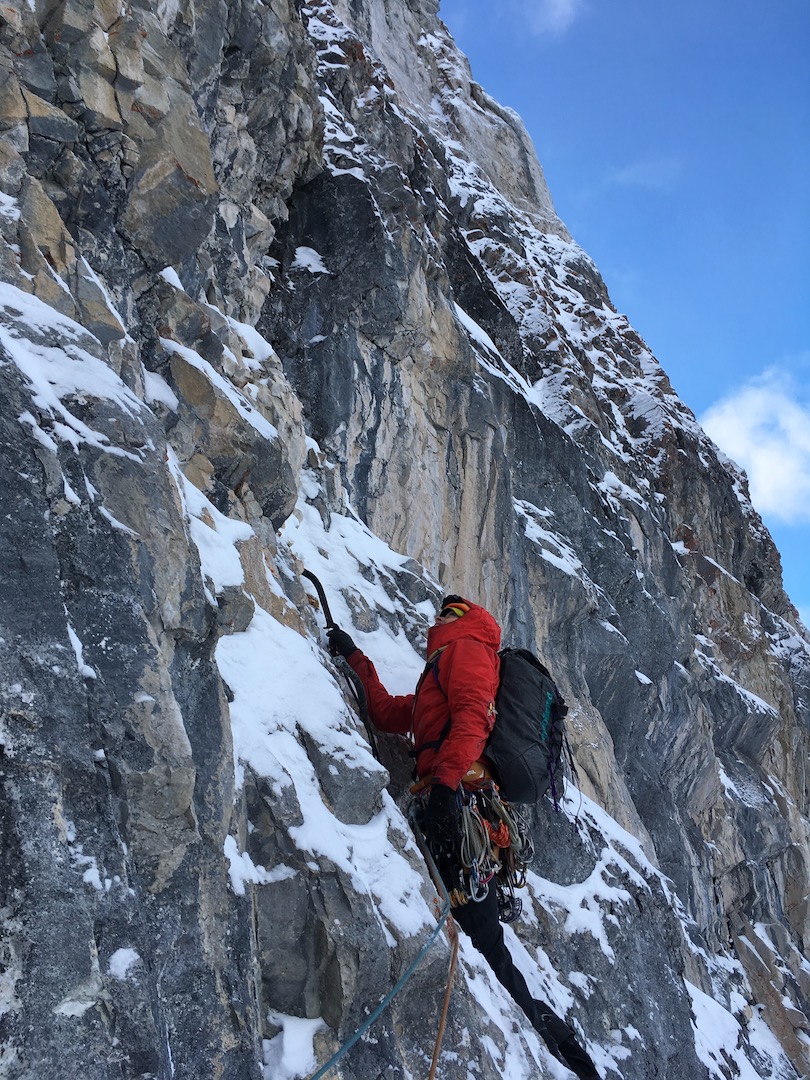 On February 13, I took a 20-plus-meter lead fall while attempting a new route high on the north face of Mt. Lawrence Grassi, above my home in Canmore. My friend Ethan Berman and I had good weather, were climbing well, and were within two pitches of completing the route. It was late in the afternoon and I was climbing what had been by far the most heady rope length thus far. The opportunities for protection became scarce in the second half of the pitch, but I felt confident that I would not fall. I was committing to the last steep bulge before the next belay stance when one of my axes ripped from the choss and I was airborne. I ripped two pieces—a knifeblade and a red Alien in a shallow notch—before the ropes finally caught me. Thankfully, the terrain was fairly sheer and devoid of ledges. I realized how far I had fallen when I looked over at Ethan, almost level with me at the belay. Ethan and I rappelled the route and descended the gully below the face back to town, where an X-ray revealed a hairline fracture in one of my scapulas. I was extremely lucky to walk away from the fall.

It was a tough spring for many in our climbing community. There were deep wounds with the tragedy on Howse Peak and a number of other tragedies elsewhere. I questioned what I needed from climbing, but ultimately realized that sometimes I need the spice that Canadian Rockies mixed climbing provides. It fills me with deep nourishment that I simply cannot obtain from more insipid forms of climbing. I realized that if I was going to keep at the exercise of scratching around in choss, I would have to curb my ego and not let my desires overstretch my abilities. After two and a half months away from the route, and a complete cycle of rehabilitation with a very good physiotherapist and trainer, I was ready and psyched. On May 3, I returned to the north face of Lawrence Grassi with Ryan Richardson to finish what I had started.

Winter was technically over, but winter conditions still existed up in shady “Canmonix,” as local climbers lovingly call the 300- to-500-meter faces above town. The direct start dagger we had established earlier (see editor’s note below) to access the first thin ice pitch of Raphael Slawinski’s Tainted Love (320m, WI3 M9) was rotted out, but Tainted was still in, so we climbed that for two pitches before splitting off to the west (climber’s right) into the attractive chimney/groove feature that Ethan and I had climbed before. We made steady progress, swapping leads until we reached the pitch that had spit me off three months prior. I took the sharp end again, and we joked about how I was going for the “pinkpoint,” since all the gear had been left in situ when we pulled the rope after the fall. The jokes helped me relax. “It’s practically sport climbing!” I laughed to Ryan as I left the belay.

I had been afforded plenty of time to think about how I would climb this pitch the second time around, and I knew what I had to do. This was about redemption, but also there was an opportunity to move differently this time. When I got to the angle pin that had caught my fall, I tested it, clipped it, and continued up the run-out section to the base of the bulge where I had fallen before. I took extra care in placing a solid pin with a proper hammer, not with my ice tool as I had before. I also placed a Totem cam where I had placed the Alien before. Clipping a screamer to the equalized nest of gear, I moved through the bulge carefully and deliberately. Reaching the belay stance, I whooped with joy. I had done what I felt was the right thing to do after two months of recovery—which I had spent, at times, in a pit of despair, doubt, and trepidation. It was only an average pitch of traditional mixed climbing on a small-potatoes first ascent, but it was a proud moment for me.

Ryan met me at the belay and took off up the last pitch, linking an aesthetic offwidth corner with some chest-deep snow tunneling to reach a nice belay stance at the top of the final rock band below the corniced ridge. Not wanting to tempt fate with the cornice, and feeling that the summit was not a necessary formality to the line, we began the rappels. I called the route Canmore Swingers Party (300m, WI3 M6+ R).

What I took away from this route was a more acute sense of where my motivations lie. A little older now, a little wiser. My deflated ego and broken shoulder blade would serve as a reminder of how much respect the Rockies deserve, especially when climbing new terrain, ground up and by fair means.

Editor's Note: On January 23, before the first attempt on Canmore Swingers Party, Hamill and Will Skea climbed Canmonix Sit Start (170m, WI5 M7), which adds a 40m pitch and about 130m of snow slogging to reach the first pitch of Tainted Love.