On the evening of June 6, NPS rangers were alerted about a climber who was unresponsive and experiencing seizures in 14,200-foot camp. This 40-year-old male had been pulled from his tent when his climbing partner found him experiencing seizures while cooking in their tent during a storm. The responding mountaineering ranger and his team found the patient was initially responsive only to painful stimuli, but after 30 minutes of oxygen therapy he had returned to normal mental status.

Both this patient and his climbing partner, a 44-year-old male, were found to be suffering from carbon monoxide (CO) poisoning. The partner had exited their tent when “feeling off” and thus was able to alert others that his partner had become unresponsive.

Both of these patients required constant treatment and monitoring until the weather cleared two days later. At this time, both climbers were flown to town and taken to the hospital for further testing and treatment for acute and chronic CO poisoning. During their stay in the NPS medical tent, the patients received alternating treatment with supplemental oxygen and hyperbaric therapy in the Portable Altitude Chamber in hopes of expediting the removal of CO from their red blood cells.

Carbon monoxide poisoning is a life threat for mountaineers, especially when weather conditions force climbers to seek shelter while cooking. The outcome of this incident could have been catastrophic had one of the climbers not responded to his “unwell feeling” by exiting the tent for fresh air. The changes to a patient exposed to carbon monoxide can be subtle and often unrecognized by those exposed, as initially the signs and symptoms may mimic the effects of altitude or general unwellness. Adequate ventilation should always be the priority when cooking in an enclosed space such as a tent. (Source: Denali Mountaineering Rangers.) 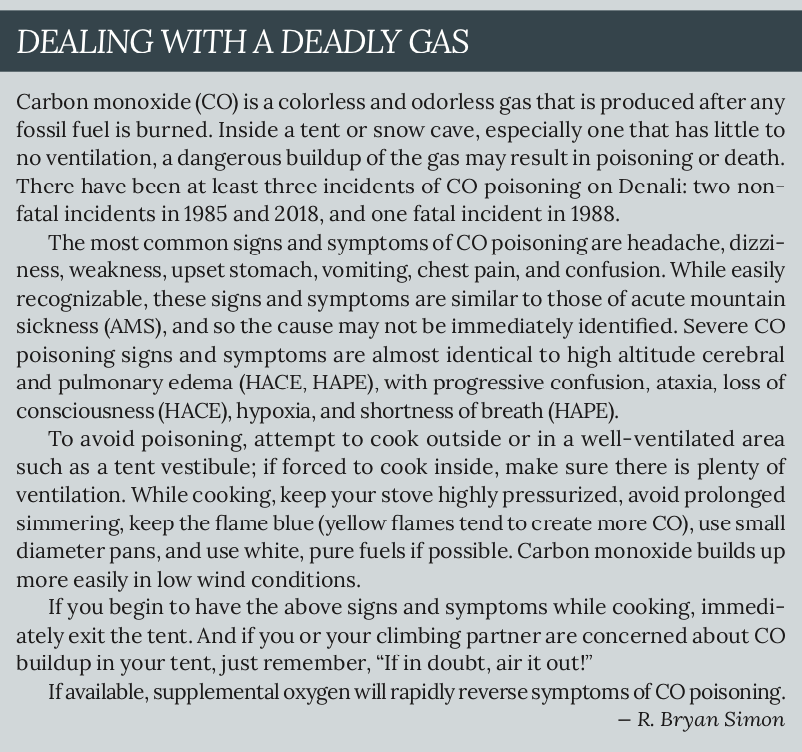