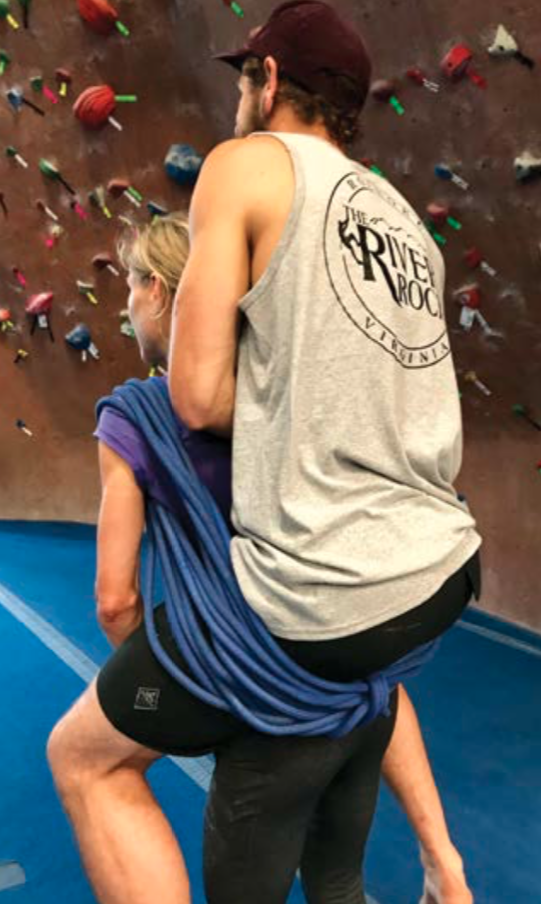 ONE OF THE MOST COMMON injuries for climbers during a fall is a sprain or break of the lower leg. An easy morning hike to the crag can turn into an evening epic if a partner has injured a leg. The following techniques may allow a small team to evacuate an injured partner without additional help.

As with all accidents, assess the fallen climber for life-threatening injuries and address any of these first (think ABCs—airway, breathing, circulation—as well as head trauma and massive bleeding) before evacuating. If the climber has no life-threatening injuries and you are not concerned about any head or spine injury, the one-person or two-person rope litter can greatly increase your ability to evacuate an injured partner.

Both of these litters are easy to construct and allow the injured climber to be carried in a “piggyback” fashion. The rope distributes the climber’s weight to the rescuer’s shoulders and hips, much like a backpack.

Rope carries can be used in any terrain, though care should be taken in talus, and other techniques might be better in loose scree. By distributing the weight effectively, these techniques also allow lighter climbers to carry significantly heavier partners for some distance.

The first step to create this litter is to coil your rope into a single-strand butterfly (backpack) coil, beginning with the rope running over your shoulders and one end of the rope touching the ground. Continue coiling your rope until there is roughly two meters remaining. Ideally you want all of the coils to be equal in length, settling to just above your hips, as these loops will distribute your partner’s weight across each strand.

Next, carefully lay the coil on your rope mat or the ground. Take the initial length (the end that touched the ground) andbring it to the center to create another coil loop. Using the other end of the rope (two-meter portion), create a final coil and use the remainder of the length to create a tight finishing wrap several times around the center of the coils, tucking the tail back through these wraps and tightening to secure the litter. This final wrap will become the injured climber’s seat.

Pad the coils around the shoulders with whatever is available for comfort, and use a sling and a carabiner to secure the two coils at your chest, like a chest strap on a backpack.

To get your partner into the litter, it is easiest to get them to lean against the wall or a nearby tree. Put one coil over your shoulder and snake the remainder behind your partner and then place the other coil over your opposite shoulder. Make sure the wrapped section is located beneath your partner’s buttocks. Carefully stand up. The patient’s legs should go to each side of the rescuer, with his or her inner thighs directly against the rescuer’s flanks, as if being carried “piggyback.” Attach the sling and carabiner.

This litter is similar to that above, but can be used by two people. While distributing the injured climber’s weight between two people is a huge advantage, this technique can be difficult to maneuver “three wide” on narrow trails. It is also difficult if the height of the two rescuers is greatly different; when heights are different, situate the coil “seat” to the side of the shorter climber to allow for better weight distribution.

To create an effective two-person carry, coil the rope into slightly longer coils so that it allows the injured climber to sit between the rescuers at the level of their hips. Each rescuer should place a coil over their head and on top of their outside shoulder. Again, pad the coils for comfort.

A few final points. Dynamic ropes will stretch somewhat with the weight of the climber, and litters may need to be recoiled during longer evacuations. In cold conditions the injured climber needs to be well insulated, as he or she will not be active during the evacuation.