The Cleaver, Dot the T’s and Dreamliner 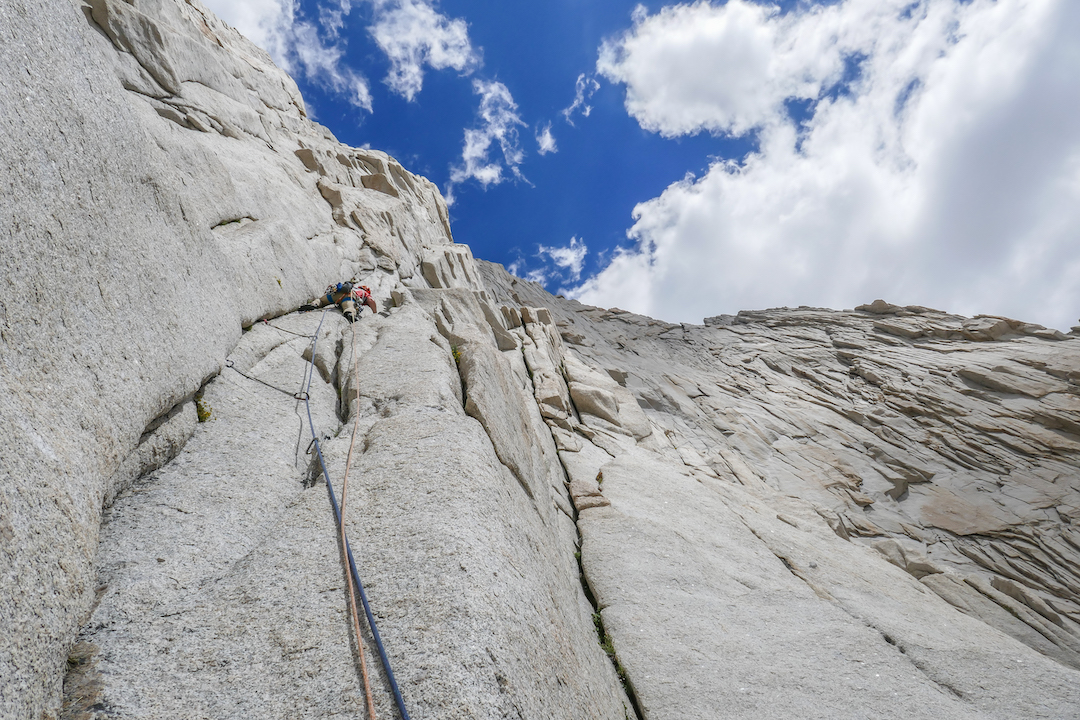 In late May and June, Shaun Reed and I made two quick trips to climb on the southeast face of the Cleaver (13,382’), northeast of Mt. Carillon and Mt. Russell. After helping Shaun with the first free ascent of the Butcher (III/IV 5.12, AAJ 2017) in 2016, we had a plan to return and try a steep corner and crack system to the left.

On our first trip, we were day-tripping to the peak and realized we had left some of our gear behind when we were 40 minutes up the trail. While Shaun ran down to get the gear, I continued to shuttle our loads up. This cluster ate up enough time that by the time we reached the base, it seemed unwise to start up the tough-looking system we wanted to attempt.

We settled for an easier crack system to the right, and to the left of the start of Cleavage Dreamer (III 5.10, see AAJ 2009). The first pitch had a very nice 5.9 hand crack, went over a few bulges, and ended with an airy layback to a spacious belay station. Pitch two had a beautiful right-facing corner that looked at least 5.11, yet positive knobs on the right wall allowed it to go at 5.9ish. Another pitch and a half of steep, good, and varied crack took us to the base of what the first ascensionists of Cleavage Dreamer dubbed the Greek Finger. We joined the Cleavage Dreamer here for its crux pitch (5.10dish), then diverged to climb a full rope-stretcher with a cool finger crack over an overhang for a direct finish (5.11a) to the top—Dot the T’s (III 5.11a).

We returned to the Cleaver about a month later with the hopes of climbing the route we had originally intended. It began to the left of Dot the T’s with a bouldery start into a nice crack and a 5.11c crux approximately 60’ up. From there, a stellar 5.10c layback allowed passage into a corner with nice hand cracks. Another pitch of 5.9, which crosses over Dot the T’s, brought us to the base of another beautiful corner with a cruxy 5.11a boulder problem guarding easier climbing. Two more pitches (5.10 and 5.9) took us to the top. The route had dreamy cracks and nice rock, and as we’d thought about it for so long, we thought Dreamliner (III/IV 5.11c) a fitting name.