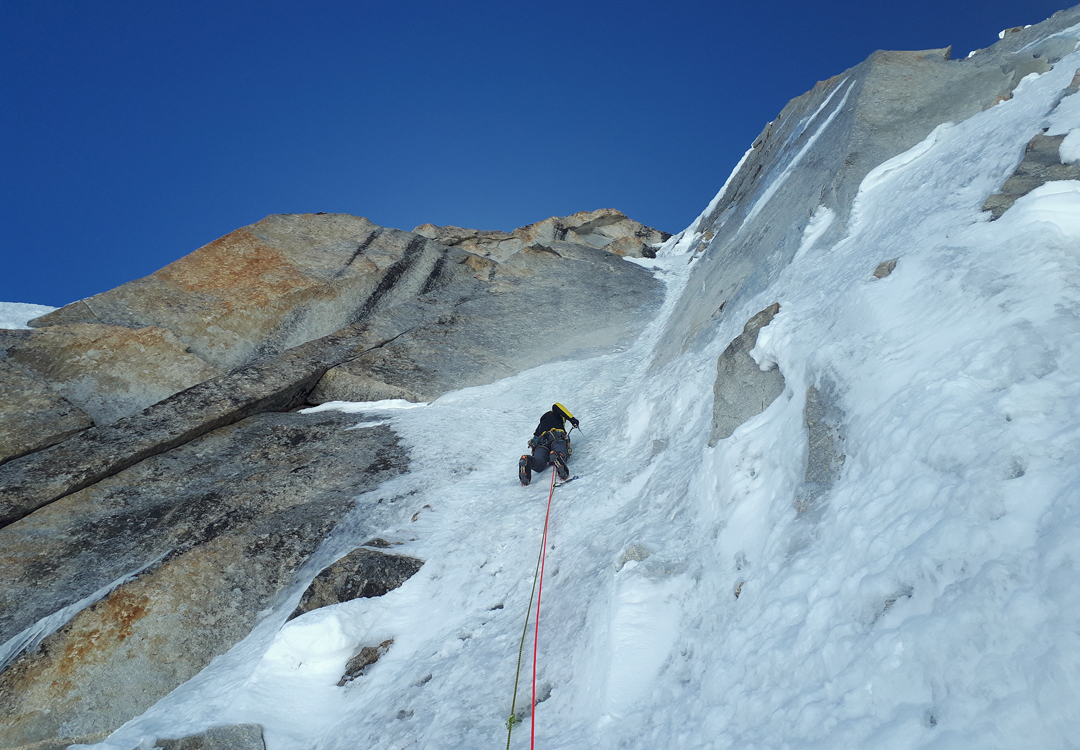 On the long west-northwest ridge of Baintha Brakk (a.k.a. Ogre, 7,265m) lie several impressive summits, including Baintha Brakk West (6,660m) and Baintha Brakk West II (6,540m). Max Ten and I had the latter as our goal and approached up the Biafo Glacier, making base camp at Karpogoro (4,680m) and advanced base five hours above, beside the lake on the Sim Gang Glacier.

To acclimatize we attempted Dom Brakk (5,830m, 36°01'36.8''N, 75°41'41.1''E), a snow dome climbed a number of times in the past. We approached via the south-southwest ridge, hiking up gentle scree and easy rock to reach the snowy ridge leading to a minor summit of 5,560m (36°1'9.55"N, 75°41'16.71"E, most likely climbed before). On the way I heard a "whoomph" from the snow; we were in a safe position, but I took note. We camped on the minor summit and next day left for Dom Brakk. After an hour of trail breaking through deep snow, we stopped below a heavily loaded slope and, mindful of the previous day, decided to retreat.

On the way back we spent a second night on the summit of Peak 5,560m, where we could view our intended route on Baintha Brakk West II, up the impressive buttress on the right side of the north face. It looked very steep for the first 15 or so pitches, and we decided to switch goals to the northeast buttress, on the left side of the face, because it looked less sheer and had more ice smears.At 7 a.m. on August 4 we crossed the bergschrund and started up the face. We climbed a steep ice runnel between large mushrooms to reach an ice smear—our proposed line. Closer inspection showed the ice to be too thin, so we traversed 70m left to the base of a second, fatter smear. By this time it was 6 p.m. Twenty meters below the entrance to the smear, we chopped a platform big enough for us to sit comfortably, then put up the tent and went to sleep. Our satellite phone had no reception (the signal blocked by the mountain), so we had no idea that just a few days earlier Sergey Glazunov had been killed on Latok I. News had spread fast, however, and family and friends were worried about us. 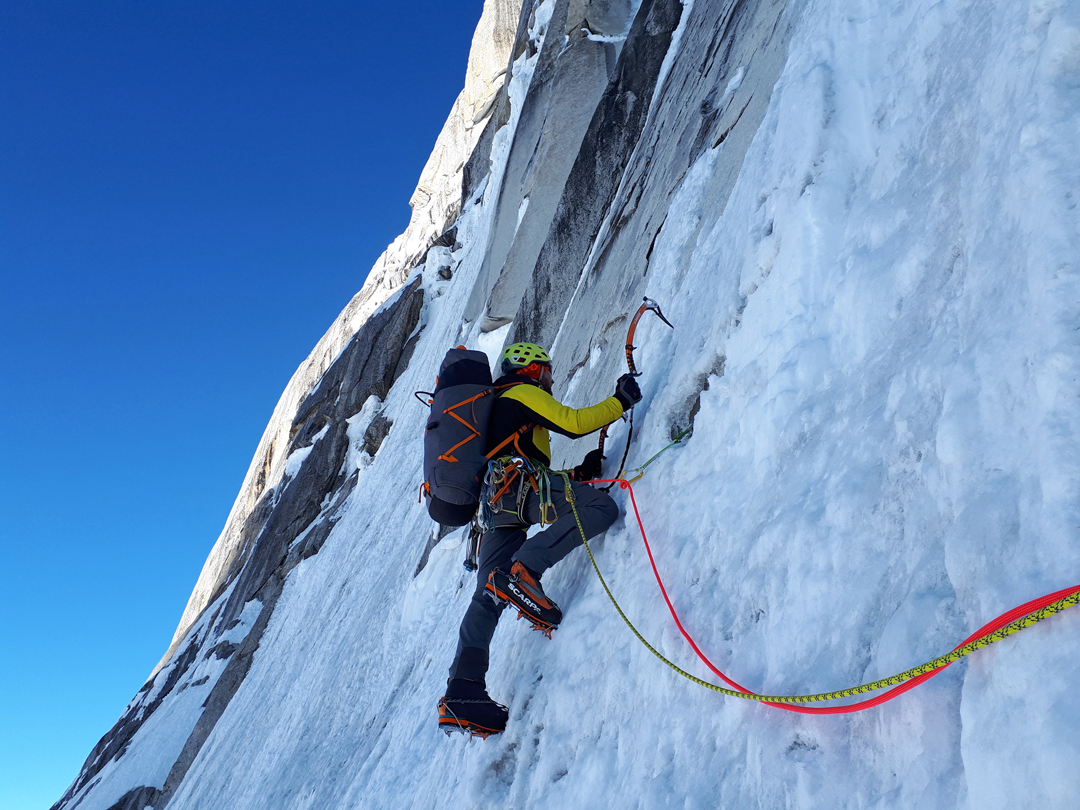 Next morning we climbed two steep and really thin ice pitches, the second of which was the scariest ice lead I've ever done. For 15m a sheet of ice only a few centimeters thick lay unconnected to the rock beneath. Above, we climbed five more pitches to reach the steep upper buttress at 5,800m, where we stopped for the night on a mushroom. In our original plan we had hoped to be here in one day or less.

Next morning we had a conversation. Our phone was not working, we were slow, our acclimatization was obviously insufficient—everything felt wrong. We made an uneventful descent until just above the bergschrund. Having downclimbed the last 100m, I was standing on the lip and looking at a snow cone just 4m below. Jumping was not an option—the snow was too hard. With Max still above me, I cut a bollard, threw the rope over it, and began to descend. As I went over the lip I felt the rope begin to cut through the bollard. I froze and asked Max to secure the anchor with an ice tool. He placed the tool, clipped the rope, and assured me it would hold. As I pushed myself out again, the rope cut through the bollard, pulled out the ice tool, and I took a free-fall onto the snow cone and then down into a crevasse. Luckily it was packed with snow, and after a 15m slide I came to a halt.

It was a close call. I clambered out to find a confused Max above me, convinced that I had fallen to my death. After explaining I was fine, I threw up the rope and the ice tool. Max made an anchor from both tools, descended safely, and we pulled the ropes and both tools down. Or so we planned. Max moaned when he realized he had forgotten to clip both tools together. OK, we had to accept one lost tool, and we made a quick escape before something fell on us. I hope we'll manage a return match with Baintha Brakk West II.