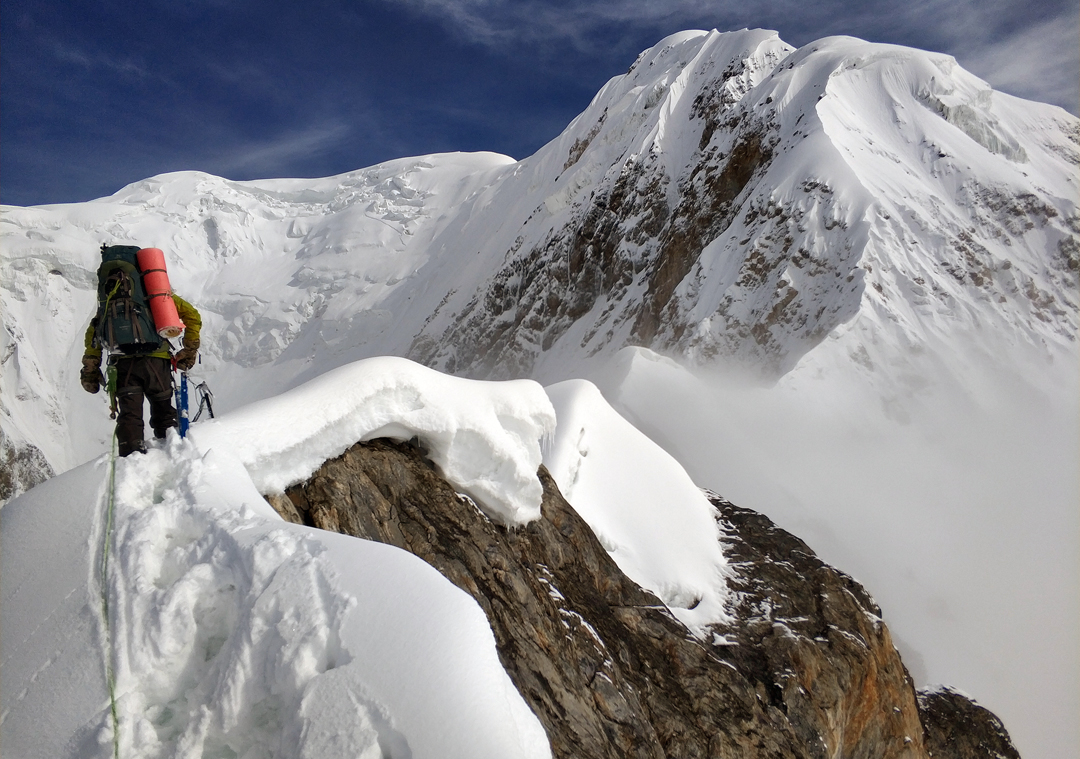 From July 26 to 28, Murat Otepbayev (leader), Tursunali Aubakirov, Igor Malkin, Maxim Pavlov, and Grigory Shchukin from Almaty climbed a new route on the south side of Bayancol (5,841m). Situated directly opposite Khan Tengri on the North Inylchek Glacier, Bayancol (42°17'3.20"N, 80°10'26.79"E) was first climbed in 1953, via the north ridge, by Vladimir Sipilov's party (4B). It appears that the first route on the south face, above the North Inylchek, was possibly not climbed until 2008, when Almaty mountaineers Gennady Durov and Boris Dedeshko followed the southeast ridge (5A) to the summit, making one bivouac. The lack of attention is easily explained by the fact that more or less everyone visiting Khan Tengri’s north-side base camp concentrates on climbing this popular, almost 7,000m peak.

Bayancol’s southeast ridge descends from the summit to around 5,600m, where it splits into two arms. The 2008 route climbed the eastern arm, while the 2018 route climbed the western one, a southwest-facing spur. The five Almaty mountaineers climbed 17 pitches up the loose, rocky spur to join the southeast ridge, which they followed (cornices and a few ice steps) to the summit (5A). After camping on top, they descended northwest to Odinadtzaty Pass (4,850m), from which they continued south down to Khan Tengri base camp. Prior to the climb, they had all summited Khan Tengri from this camp.

In previous times, Bayancol lay on the Kazakhstan-Kyrgyzstan frontier, but a treaty that went into effect in 2008 led to the entire mountain being placed within Kazakhstan.