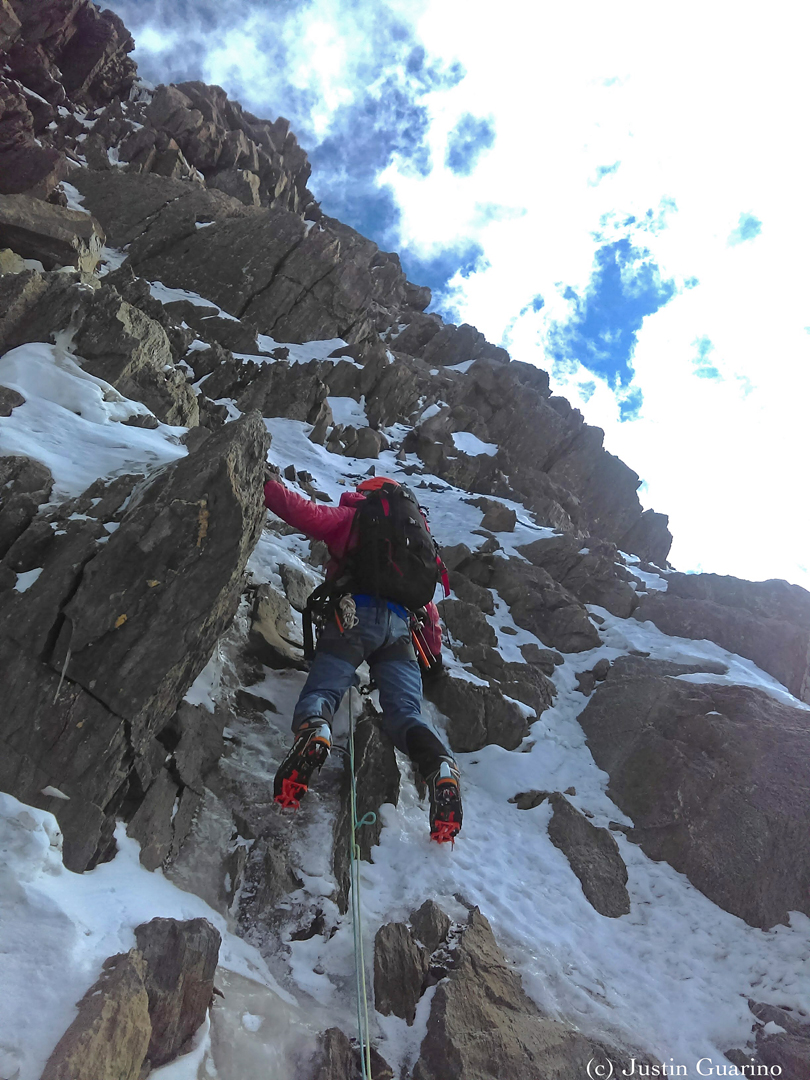 A BORDER DISPUTE with China dashed our hopes of a permit for Rangrik Rang, but at the last minute Justin Guarino and I obtained permission to attempt Baihali Jot (6,365m). In September 2017 we approached up the Baihali Nala from the Chenab River to the west, and after two days' walk from the village of Shaor we placed a base camp at 4,000m. For the next month we saw no one except our liaison officer, a cook and his assistant, and a few shepherds.

We acclimatized by climbing up the northwest spur of Baihali Jot North. This gave moderately technical ice until we retreated at around 5,700m via 20 rappels and many hours of downclimbing extremely loose rock. The poor rock of the area would continue to plague us. A cairn near base camp with Asian inscriptions, and another at 5,200m on the spur, make us believe the northwest spur is the line followed in 2001 by a Japanese expedition that climbed the north summit via the "north ridge" (see editor’s note below).

We then turned to our main objective, Baihali Jot, and its northwest pillar. We left base camp at 10 p.m. and were at the bottom of the face at 5 a.m. On that first day we mostly simul-climbed 50–65° ice on the north side of the pillar. In midafternoon we spent a couple of hours hacking out a semi-hanging tent site at around 5,550m.

The next day dawned cold and clear, and the route continued to be highly enjoyable—technical but not extreme, with steep sections of AI3. At around 6,000m we popped onto the crest of the pillar itself to face a rock wall guarding the summit icefield. At this altitude my calves and forearms were screaming after the first few moves on the wall and the climbing seemed intense, even though the crux rock corner would probably be rated M4/5 at sea level. A few rope lengths higher, we decided that worsening weather, nightfall, and painful leg cramps were signs we should descend. We drilled the first of around 22 Abalakov anchors and began to rappel into the blackness on our 70m ropes. Two and a half days after leaving the glacier, we were back, and after a day's rest in base camp we packed and headed for home.

Topography and Climbing History of Baihali Jot: The topography of Baihali Jot is confusing, as maps have traditionally marked the summit on a northern top (and noted a height of around 6,280m). Photos and Google Earth show that the northern top cannot be the highest, and the Indian Mountaineering Foundation’s list of open peaks (where it is spelled Behali) now designates Baihali Jot as 6,365m and places it on the south summit.

The mountain lies at the head of the Ur Gad (valley) immediately west of the Miyar. In 1969, the first expedition to explore the upper valley, an Indo-British team, reported making the first ascent of Baihali Jot (Martin Sinker and Randall Willams, U.K.; Harsh Bahuguna, A Sharma, and Chiseng Sherpa, India). Clear sketch maps from joint expedition leader David Challis, together with expedition photos, suggest they climbed the north top via the southeast face and "west ridge" (the peak has a southwest ridge).

In 1973 a British Army Mountaineering expedition led by John Fleming declared that the 1969 high point was no more than "a bend in the ridge," agreeing with Bahuguna's statement that this summit was "unremarkable." The 1973 team reached a col at the southwestern head of the glacier, named Pegasus Col, from which four members climbed approximately northward over a broken rock buttress and on up a steep and exposed snow arête to Baihali Jot’s southern top, which was clearly higher than the point reached in 1969. (The expedition also made the first ascent of Gurkha Parbat, ca 5,900m, southeast of the col.)

Baihali Jot was reportedly climbed again in 1992 via the "east face and south ridge" by a team from West Bengal. It seems logical this was another ascent of the north top. Another Indian attempt, in 2008, failed at the bergschrund. In 2001, seven Japanese and three Indians climbed the north summit via the "north ridge" (there are only northwest and northeast ridges).

All this implies that Baihali Jot (the higher south summit) may have been climbed only once, and the north top perhaps three times.