Illampu: Revisions of Climbing History on the West Side 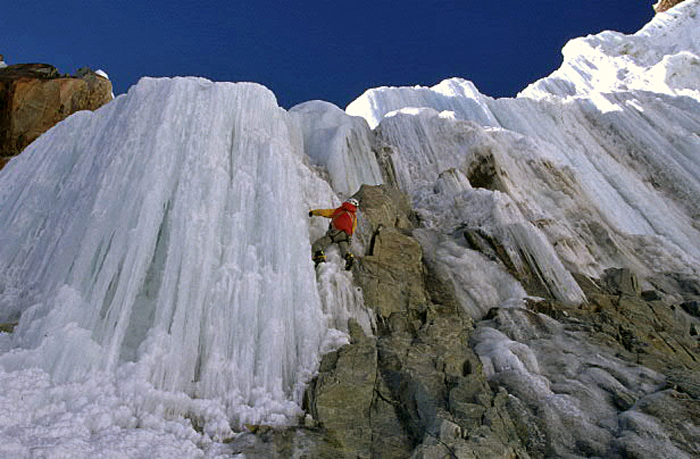 THE HISTORY and exact whereabouts of established routes on Illampu, particularly its western aspect, has been something of a muddle. New information about several routes is helping to set the record straight.

Illampu has two summits: north (6,310m, but not to be confused with Pico del Norte, which lies much farther north again) and south (6,368m), separated by a quasi-horizontal, narrow, and often corniced ridge. The normal route to the south summit is the southwest ridge, generally gained from the north via the glacier below the west face, and first climbed in 1928 by Erwin Hein, Alfred Horeschowsky, Hugo Hortnagel, and Hans Pfann (800m, AD). The second ascent was made by Japanese and the third, in 1964, by Yugoslavians (reported repeats of the "Yugoslavian Route" are in fact ascents of the normal route).

In his book The Andes of Bolivia, the enigmatic Alain Mesili records his first ascents of the Ruta Corridor (D+, Kramer-Mesili-Pratt-Whitelock, 1978) on the north face (which he labels the southeast face), and the Ruta Las Torres (1980) on the northwest buttress (which he labels south ridge), reaching the crest via the north flank. The northwest ridge was almost certainly first climbed, in part or in whole, in 1970 by Americans Andy Harvard, James Jenny, and Todd Thompson, who traversed over the south summit and down the southwest ridge. In June 2002 two Frenchmen, Sébastien Constant and Jérome Mercader, started up the Ruta Corridor and branched right to complete Conjuration des Imbeciles (M4 WI5) to the north summit. From here they crossed the connecting ridge to the main top and descended the normal route to regain their camp, all in one long day.

In 1978 four Spanish climbed the west face and upper northwest ridge—the first route to be successfully accomplished on the west face. The four climbers who made the first ascent, over three days in August, were Òscar Cadiach and Àlex Ossó, and Enric Dalmau and Francesc Magrinyà. (The report in AAJ 1979 names the wrong climbers.) The route was TD- (UIAA IV 65°), and the team crossed both summits and descended the southwest ridge. The Slovenian Route reported in AAJ 1984, climbed by Janko Humar, Slavko Sveticic, and Zarko Trusnovec, is a repeat of this line.

In 1984, Ales Rotar and Janusz Zupanc from the former Yugoslavia climbed a new route on the west face, right of the main rocky section, leading to the step on the southwest ridge just below a prominent shoulder (AAJ 1985). From there they climbed to the summit in six hours and descended the normal route. Without a decent map, their big problem had been reaching the face, which took almost three days. They were also strapped for cash; their gaiters were made from typewriter covers and their snow stakes fashioned from parts of a bicycle.

The most prominent feature of the 850m west face is the central couloir. This was climbed over three days, July 1–3, 1986, by Andrej Gradisnik, Robi Jamnik, and Stanko Mihev from Slovenia. Apart from the first 200m, it was very steep throughout. However, the three did not make a direct entry but instead worked up left to reach and then climb a narrow gully/ramp, which led back into the upper couloir. They named the route Koroska Smer. The direct start, therefore climbing the couloir throughout, was thought to be first climbed in 1990 by Patrick Gabarrou (France) and Juan Villeroel (Bolivia) at TD. Attempting to repeat this in 1997, Sam Chinnery and Paul Schweizer (U.K.) found the start badly melted out, so they moved left and climbed a thin ice smear through the rock band (Scottish 6) to reach a narrow gully, which led back into the main couloir. They followed this (mostly 65° ice) to the top and graded the route ED1. 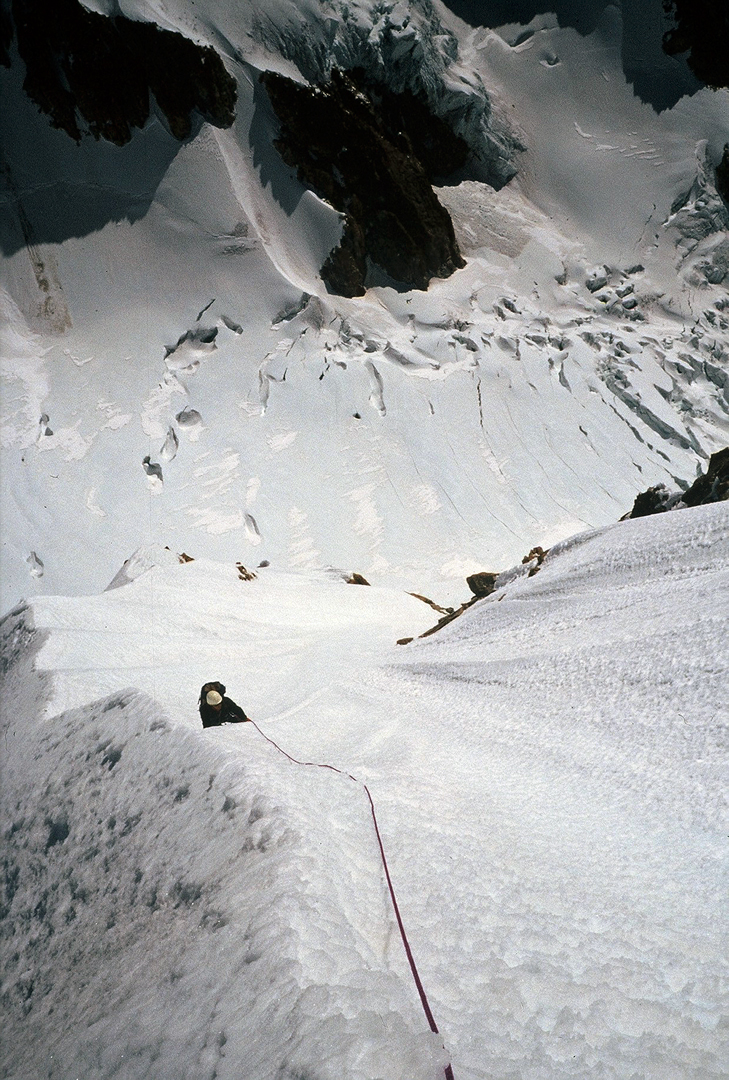 In 1991 a team of Slovenians put up three new lines on the west face, all hard and some still unrepeated. On June 25, Mare and Miha Vreca climbed Nada Mañana (850m, ED1 VI- A0 85°) in 20 hours, more or less in the fall line from the north summit. The day after, following a failed attempt some days previously, Matjaz Jamnik and Miha Kajzelj climbed Paris-Texas on the right side of the face (850m, ED2 VI+ 75°), also in 20 hours. However, the hardest route, completed from June 25–27 in 30 hours effective climbing time, was Alpos Secret (850m, ED3 VII- A3 90°), climbed by Dusan Debelak and Tomaz Zerovnik. Still believed to be unrepeated, this latter route was considered the hardest in Bolivia at the time of its ascent.

In September 1996, a French pair reportedly climbed a new line, Entourloup (800m+, TD), on the west face, but it has not been possible to find details.