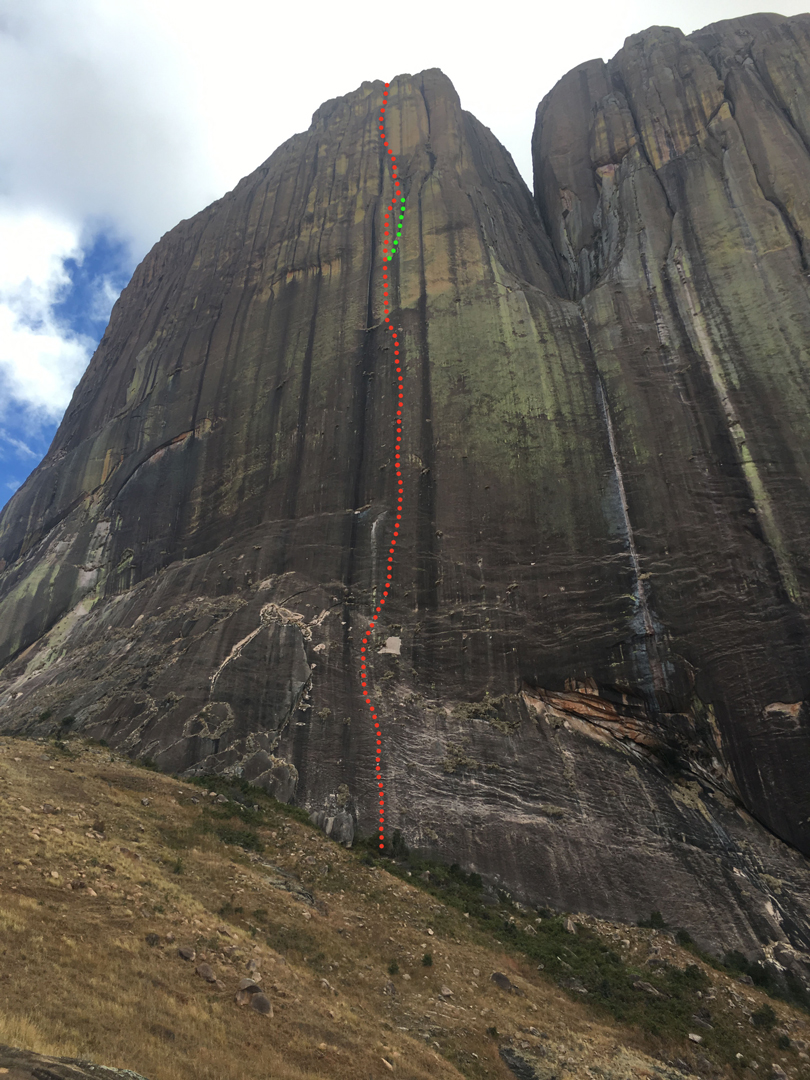 Above the tiny rural villages of Madagascar’s Tsaranoro Valley, the granite walls stand proudly like ancient giants. The stone is rough to the touch and grippy like Velcro—even with an unchalked hand in the hot Malagasy sun.

In 2018, I made the long trip to Madagascar from Scotland with my friends Alan Carne and Calum Cunningham. We knew we wanted to do a new route, but weren’t sure which feature we wanted to climb. Each wall is unique. Tsaranoro Atsimo (700m) is big and sustained. Tsaranoro Be (800m) is the tallest formation of the massif but a little slabbier. Karambony, at 500m, is significantly shorter but impressively steep. People have been climbing in Tsaranoro for at least the last 20 years. In the mid 1990s, Kurt Albert and friends put up the first routes here, followed in 1998 by the prolific Swiss developer Michel Piola with the mega-classic Out of Africa (5.11d). In later years many more climbers would visit, putting up some of the hardest long rock climbs of their generation. In 2008, Arnaud Petit made the first free ascent of Tough Enough (5.14a) on Karambony, and in 2010 Adam Ondra free climbed Mora Mora (5.14b) on Tsaranoro Atsimo.

The faces of Tsaranoro offer very little in the way of natural protection, so bolting is the modus operandi for new routing. But the climbing ethic is ground up, and routes often feature long runouts. We packed a drill and 200 bolts, which—upon chatting with Arnaud Petit—we agreed to place generously, keeping in mind there is no mountain rescue and the nearest hospital is five hours away on bad roads.

Our first foray onto the face of Atsimo resulted in a three-day ground-up push on a potential line to the left of Mai Più Così (5.13b, Larcher-Svab-Sterni, 1998). Moving into the imposing midsection of the route, we hit a dead end. The wall completely blanked out, and so we descended.

Our second attempt was also on the face of Atsimo, this time weaving between two obvious black streaks on the right of the face. I had previously worried this line would be too close to the recently climbed Fire in the Belly (5.13c, Vanhee-Villanueva, 2015). However, after investigating the face, it turned out that my perception of scale was vastly skewed—the two lines were not nearly as close as I had imagined. 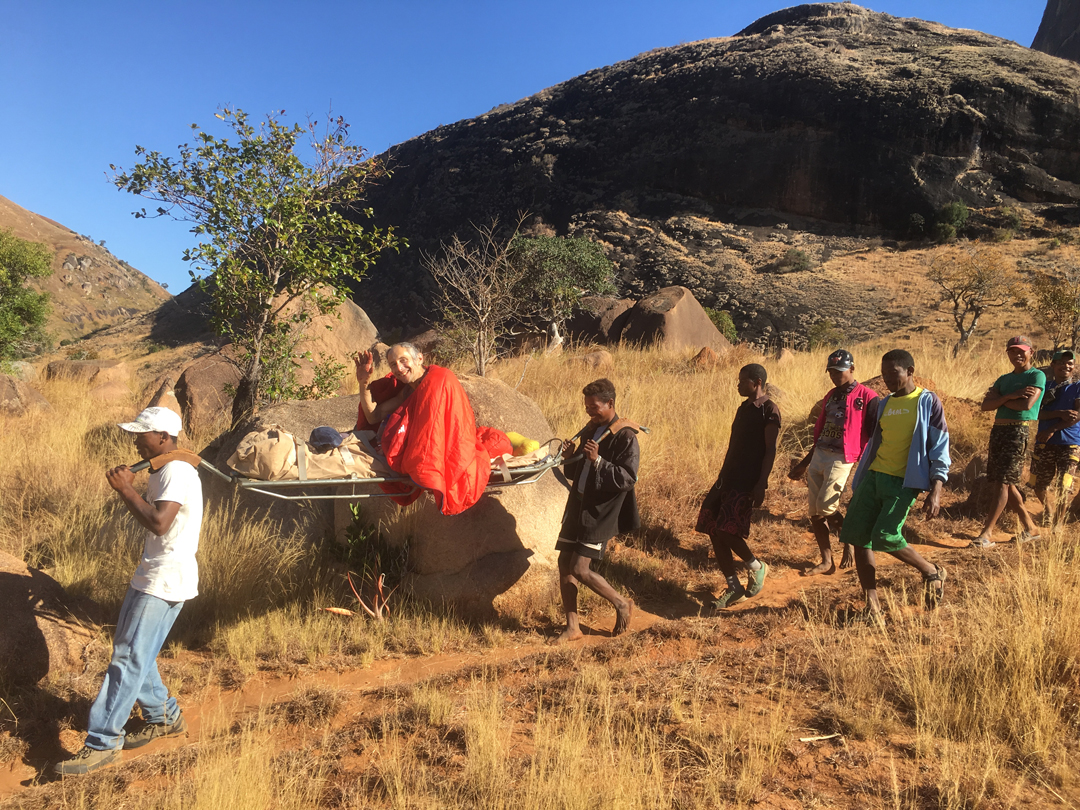 We climbed the 700m wall over six days, bolting completely ground up with the intention of free climbing the route after we finished the grueling developing process. After a couple of days rest, we returned for the free ascent. However, this did not go to plan as, on the third pitch, Alan took a short but nasty fall, breaking his leg in three places. Calum and I got him down, and, following a very stressful 48 hours of travel and medical care, an emergency evacuation from Madagascar ensued.

Calum and I returned five days later, mentally drained but with the same burning desire to achieve our goal. At pitch three, where Alan had broken his leg, I took the lead. It was difficult to ignore the thought of what I had witnessed only days earlier. Despite the grades being relatively low in the bottom half of the route (mostly 5.11+ and 5.12 terrain), it is very technical ground and the rock is quite flaky. This had us perpetually on edge, which added to the intensity and sustained feel of the climb.

Pitch nine is the crux of our route. Bolting this pitch was an ordeal that took me five hours and cost me a chunk of my tooth when a skyhook unexpectedly exploded into my face. I was exceedingly happy to climb this pitch on my first free attempt—and even more so that I’d found the only line of weakness up the imposing blank face. It weighs in at a meaty 5.13c: heady, with a lot of exposure and the crux right at the end.

After three days of effort, Calum and I summited Tsaranoro Atsimo having both freed our new route: Blood Moon (700m, 5.13c). We named it for the rare lunar eclipse we’d all seen earlier in the trip.

I found fantasy and adventure in Tsaranoro, but more than that I discovered a culture that favours friendship and community over everything else. The Malagasy are a truly wonderful people.