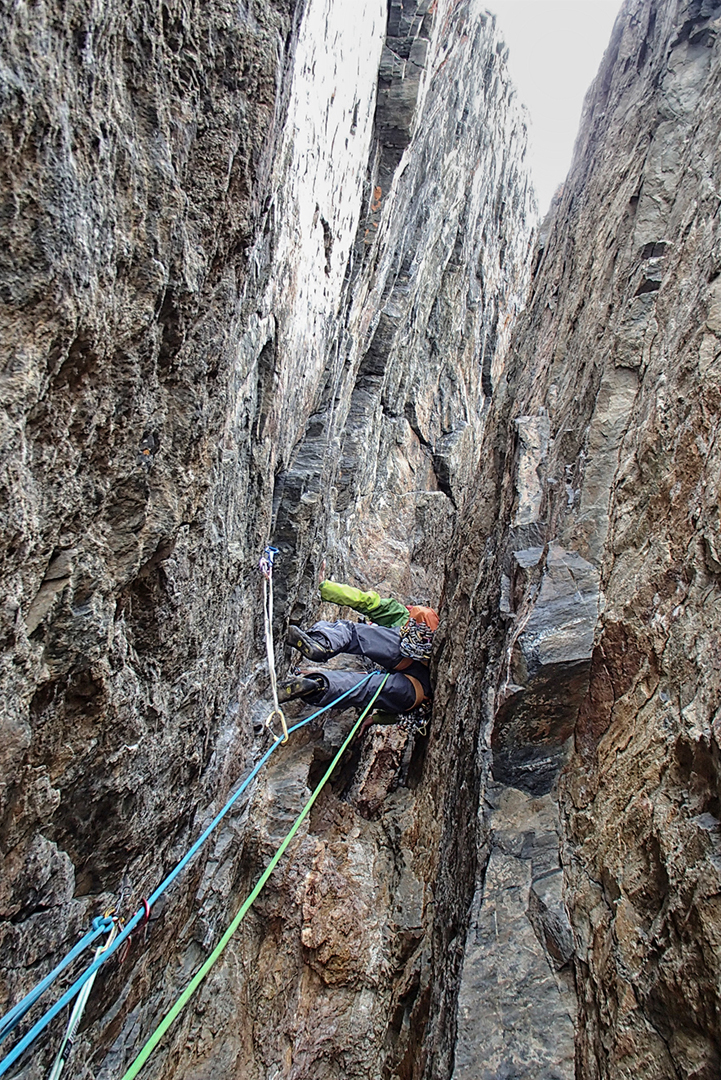 From July 24–27, 2016, Maciej Bedrejczuk, Piotr Sulowski, and I made the first free ascent of the Rhombus, the outstanding north-facing feature on Chatyn-tau (4,412m). Around half a dozen routes climb the 600m-plus rock wall of the Rhombus, and we chose the 1959 Mishliaev Route (6A), which follows a chimney system toward the right side and was used to make the first winter ascent of the north face (AAJ 2007).

Sustained difficulties on loose rock with poor protection pushed us to our limits. We climbed alpine-style with two bivouacs (no tent), the first about halfway up the Rhombus and the second below the upper pillar leading directly to the main top. From that second bivouac, we traversed right and climbed to the col between the west top (4,310m) and main summit. From here we followed the west ridge to the highest point and descended to the Ushba Plateau, where we made our third bivouac.

We climbed the 1,160m face at M6+ 6c 70° R. It's worth noting that the north face of Chatyn-tau is isolated from civilization by an approach of two long days up the chaotic and complex Chalati Glacier. [Although Chatyn-tau lies along the frontier with Russia, the border bends sharply here and the peak’s north face is entirely within Georgia.]

One year later (July 10–13, 2017), the same team attempted to make the first free ascent of the 1972 Grigorenko–Prigoda Route (6A) on the west face of Ushba (4,710m), the only established route that climbs directly up the middle of this Georgian face to the main summit. The first alpine-style ascent of the route was not made until 2015 (AAJ 2016). We completed our ascent alpine-style with two bivouacs on the face and a third in the col between south and north (4,694m) summits. Unfortunately, when we reached the crux at around 4,400m on the headwall, we found water streaming down the face from the melting summit snowcap. The only time we could climb free was during a brief period after the cold temperatures of the morning had left the face and before midday. Any later and the rock would start to get wet again. To overcome the crux section, we climbed four pitches on aid and reached the summit by late evening. The technical grades of our 2,300m ascent were 6a A2 M5 WI4 70°.