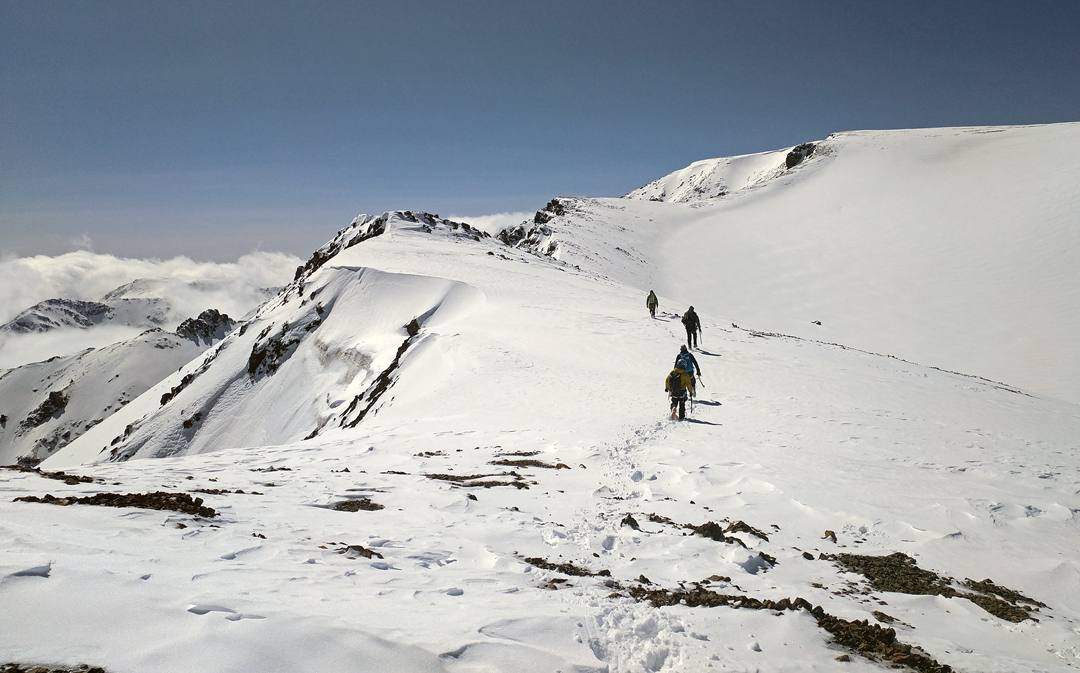 After an attempt from the south in 2017 (AAJ 2018), Eric Kowalski, Alex Tang, and I returned to the China-Kazakhstan border for another attempt on the peak popularly known as Sauyr Zhotasy (3,840m). This mountain is not exceptional in either altitude or technical difficulty, but its topographic prominence of 3,250m is perhaps the highest of any peak without a documented ascent. This year we were accompanied by Libor Jelenek and Wayne Stanley. Due to hassles with security in 2017, we opted for a much longer, but less observed, approach from the northeast, still in China but along a valley well away from the border.

During this expedition, we also learned the mountain's true name. The summit is called Muz Tau, Kazakh for "ice mountain." The Chinese also use Muz Tau, but the Tuvans to the south of the range don't have a name for the peak. The name Sauyr Zhotasy bemused locals, who explained it was a disjointed amalgamation of Sauyr, which is an old name for what is now Jeminay County (the Chinese region that includes the Sauyr Range) and (Z)hotasy, an unremarkable town to the north. No one we met recognized Sauyr Zhotasy as the name of the mountain.

After a four-day approach we reached the foot of the northeast spur leading to the north ridge of Muz Tau. This side of the range is more dramatic than the south. It holds snow all year round and is several kilometers beyond any established human camps, apart from military posts high on the border. Although temporary ger (yurt) emplacements dot the floodplain, there is not enough pasture to lure Kazakh goat herders. Base camp was at around 3,000m, beside an icy stream leading to the border. So long as guards kept their eyes toward Kazakhstan we would go unnoticed, though the bright orange of our tents was not a good choice. The last few kilometers of our approach was along a bulldozed border track, kindly installed by Chinese security.

Our route up the northeast spur had snow to 60° and two pitches of easy mixed climbing. The rock was splintered and ridges were beginning to cornice in early September; it wouldn't be long before snow dangerously loaded faces, but for now the first snows had bonded well to the rock. We linked sections of steep snow along the shadow line of a fin of rock, then followed a stepped ridge to a buttress, where we left two ropes fixed for the descent. The climbing was not too taxing, but finding a route through undocumented terrain gave it an adventurous edge.

Afternoon clouds then began to build from the south. This was weather that we'd not seen during the previous week, though on the approach to base camp there had been afternoon deluges. Four days from the car, and unsure if the clouds would blanket the peak, we made the decision to retreat a little over two kilometers from (and 100m below) the summit.

The first official ascent of Muz Tau awaits, though having seen the low-angled icefield and ridges to the north (off limits to anyone not with Chinese border guards) it is hard to see how it would not have been climbed. The entire range has dozens of ca 900m alpine faces that would give good autumn climbing.

Sadly, a security lockdown now prevents access to the entire south side of the range, ending any hopes of a quicker approach. Areas free to travel in 2017 were totally closed in 2018. We tried numerous approaches, but friendly yet firm security staff said the no-go rule would apply until at least 2020. Though not as alarmist as portrayed by certain media, travel restrictions now make much of northern Xinjiang nearly impossible for foreigners to visit. All exits from highways have lengthy security checks, more often than not resulting in denial of entry to seemingly uneventful areas. Some nationalities get more attention than others.