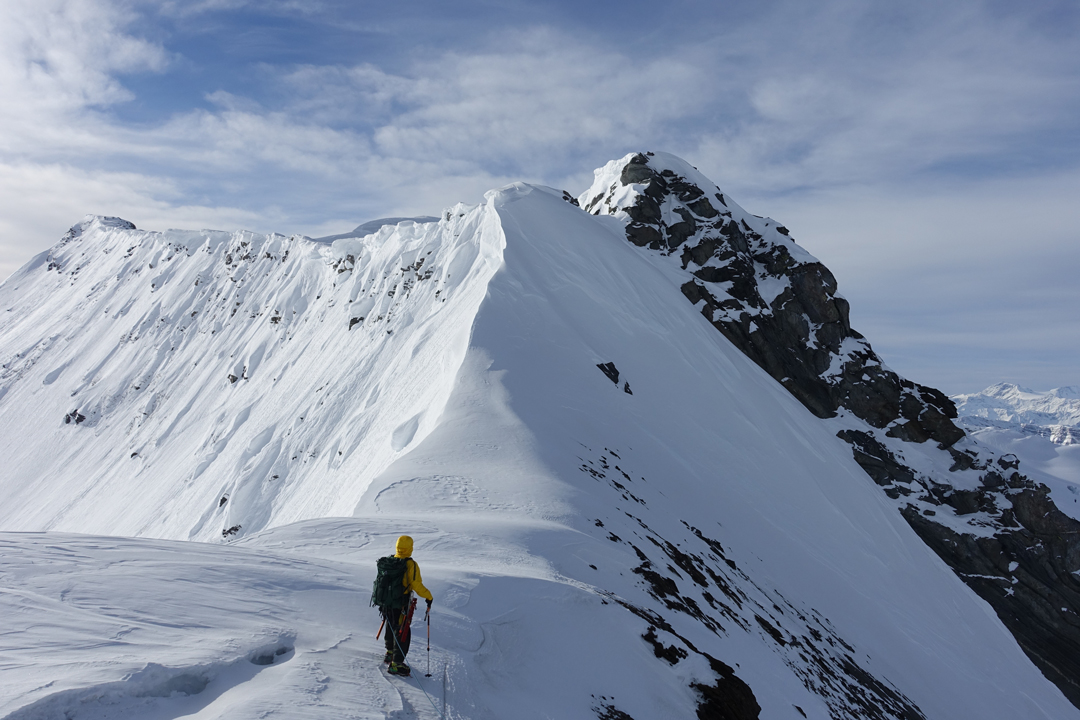 On April 2, at 5:10 p.m., Canadians Vern Stice of Edmonton, Pascale Marceau of Canmore, and I (from Minnesota) reached the summit of Jeannette Peak, which we believe was previously unclimbed. At 3,089m/10,135’, it is the highest summit in the Selwyn Range, situated in the northern Canadian Rockies in eastern British Columbia (52°38'8.94"N, 118°37'0.63"W). Jeannette’s upper ridges form a horseshoe ring holding a significant plateau glacier on the west side.

Our original idea had been to approach the peak by logging roads extending to the south and west to Kinbasket Lake, but local snowmobile clubs and outfitters said this access was impassable, and in any case the slopes above this approach would be very avalanche-prone. Thus we chose to fly in by helicopter. (We opted for a winter ascent simply because we prefer snow and ice climbing over rock.) With prominence of 1,657m (5,436’), there was no mistaking which peak was Jeanette as we approached from the air—it sure stood out above its neighbors.

Pascale and I had attempted the north ridge of the peak three weeks earlier but were thwarted by a technical rock crux and risky avalanche conditions, a mere 400 vertical feet from the summit. Regrouping for a second attempt and adding Stice as a teammate, our trio laid plans to try again in early April. 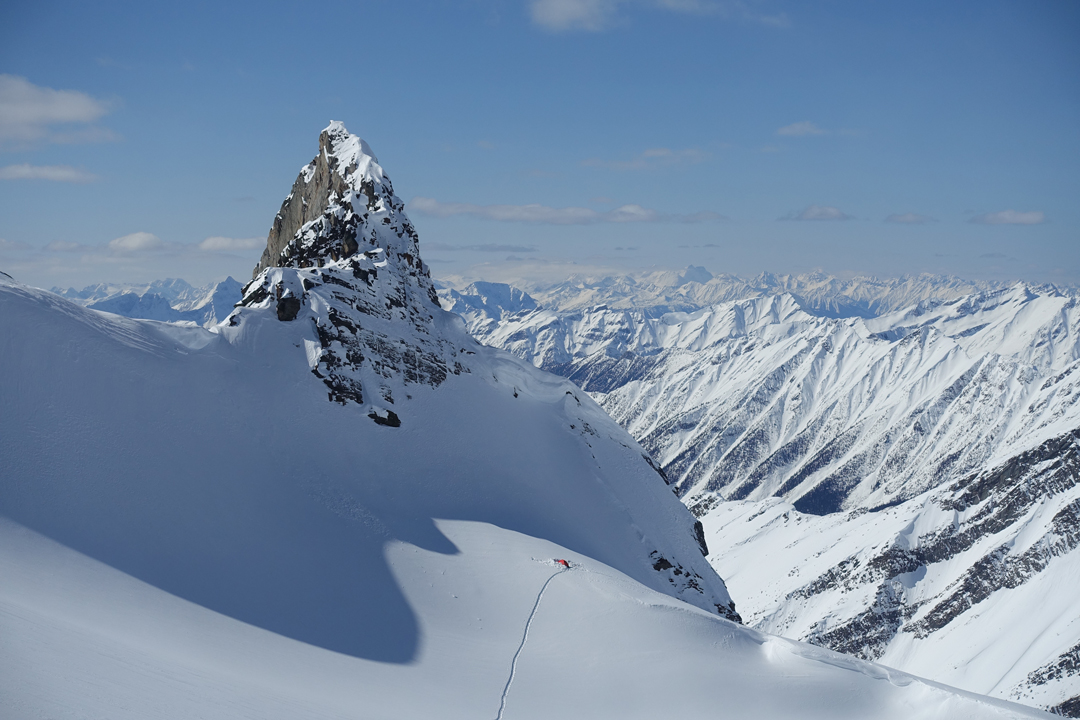 We took an early morning flight and landed in the valley west of the peak at about 2,000m. (In an effort to counterbalance our footprint, we purchased carbon offsets for this trip, as we do for all our expeditions; it’s our way to maintain some balance in pursuing these types of outdoor adventures.) We ascended a snow slope up the northwest shoulder to the glacier plateau. This slope is highly avalanche-prone, making it essential to have stable snowpack conditions. We chose to hug the rock cliffs that comprise the west ridge in order to minimize avalanche risk, although this made us vulnerable to overhead cornice falls.We carried all our gear for a high camp, in case the route was not as straightforward as we’d hoped. By late morning, we reached the glacier plateau and set up camp in a spot relatively free from cornice fall and avalanche runouts; we named it Shark Fin Camp for the obvious feature that towered above us.

Around noon of the same day, we set out toward the summit—we knew some bad weather would be coming in, so we had no time to spare. Soon our path was blocked by an icefall, forcing us to detour. We chose to gain the ridge sooner than originally planned, fully expecting a rock crux to turn us around. At every little rock high point, we were delighted to find a way around. The thrill of exploring a new route was super high!

By late afternoon we had reached the top of Jeannette Peak. Jeannette has two small summit plateaus; unsure which was the actual summit, we went to both and determined that the east top was slightly higher. With a cold wind nipping at face and hands and the clouds rolling fast, our summit celebrations were brief.

We rated our 1,084m ascent up the northwest shoulder and west ridge PD. We believe this is one of the few safe routes up the mountain in winter conditions. The north ridge route could be completed by a good team looking for a challenge. We could not see well beyond the rock crux that stopped our first attempt, but one should be prepared for 500 feet or so of ridge traverse from that point.

Jeanette is just 45km southwest of Jasper, and it was hard to believe the peak was unclimbed. However, we checked with mountaineering, ski, and snowmobile guide services, a Rockies guidebook author, and the Royal Canadian Geographical Society, and also posted the news of our ascent in various media outlets without anyone claiming a prior ascent. This climb was about pursuing true exploration. It was inspiring to discover that these peaks are out there for the adventurous in us who dare to look beyond the edge of the guidebooks.