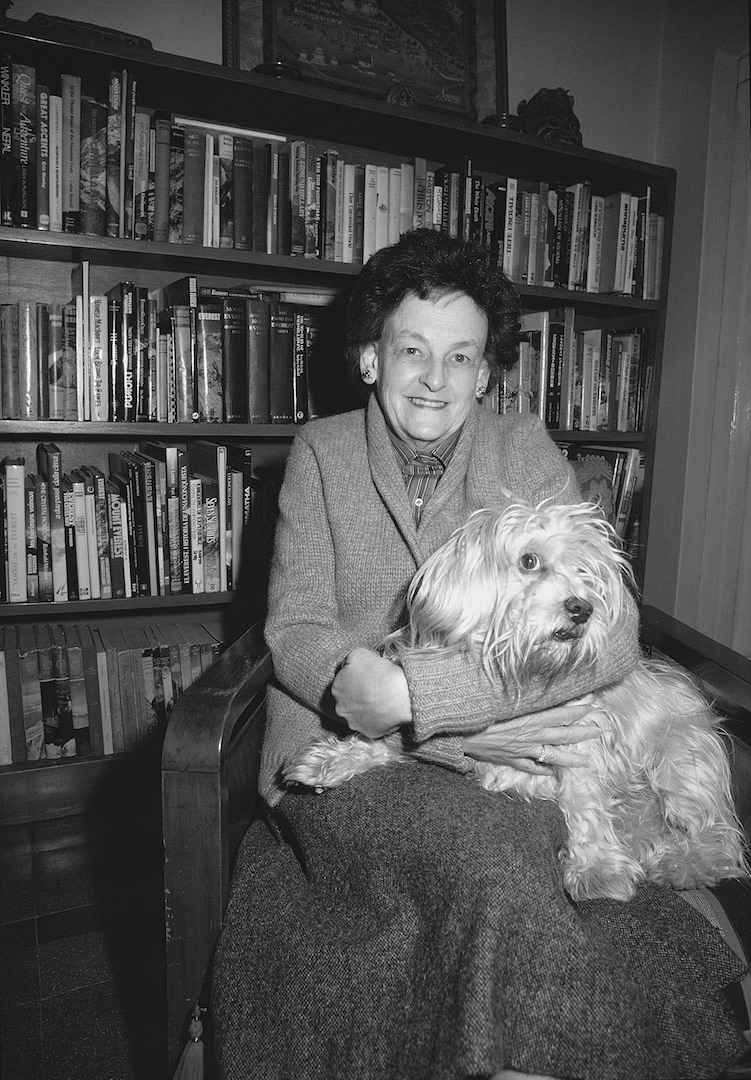 The legendary Himalayan historian Elizabeth Hawley passed away on January 26, 2018, at the age of 94 in Kathmandu, Nepal. Although her remarkable life encompassed several distinctive chapters, climbers knew her as the chronicler of Himalayan climbing in Nepal.

I first met Elizabeth at her apartment in Kathmandu in 2004. I was hoping to write her biography, and I’d planned ten days of interviews with her. She was skeptical, and I was nervous. Almost everyone who knew her warned me that she had no patience for anyone who was unprepared, that she insisted on being called Miss Hawley, that she preferred men over women, and that she liked gifts. Although I couldn’t do much about my gender, I had done my research, and I came laden with whisky and chocolate.

She was smaller than I expected, thin, and slightly stooped. Still, her eyes were dark and clear and her gaze didn’t waver. I sensed in her an innate curiosity, a confident intelligence, a no-nonsense approach, and a sharp tongue. And I was definitely aware of a good “looking over” on her part. Imagine my relief when, after just thirty minutes of conversation, she suggested that I call her Elizabeth.

There was much to admire in her. Born in Chicago in 1923, Elizabeth was a go-getter from an early age. When asked by a high school teacher what she might want to be upon graduating, she replied that she had no idea, but she was sure that she didn’t want to be somebody’s secretary. She graduated from the University of Michigan in 1946, and departed with a deep interest in American history and international affairs, social philosophy and the meaning of freedom.

She began working at Fortune magazine as a researcher and fact-checker, but her curiosity led her far beyond her New York apartment. By living frugally, she was able to launch a series of solo voyages that took her to the United Kingdom and to Central Europe, where she observed the ravages of the Second World War. She gambled in Monte Carlo and rode the Orient Express to Trieste, Italy. Gaining confidence, she ventured farther afield, meeting up with foreign correspondents in Yugoslavia, Finland, Georgia, Poland, Morocco, Sudan, Nepal, and Japan. She was clever. She was curious. And she was alone. As such, she stood out, meeting an endless number of interesting and sometimes powerful people. Her weekly letters to her mother documented her travels, leaving a fascinating trail of wonder and discovery.

She arrived in Kathmandu in 1959. In her words, “I didn’t plan to stay. I just didn’t leave.” For Elizabeth, Nepal felt remote, exotic, less affected by the rest of the world. It was also on the cusp of its very first general election. In her words, it was “a place where you can see what the world is becoming.” Elizabeth wanted to be part of that experience.

She worked at various jobs, reporting for Reuters and organizing trips for an emerging adventure travel company. She served as New Zealand’s Honorary Consul in Nepal, and she played a key role in the New Zealand Himalayan Trust. Some of her first stories as a journalist were about climbing expeditions in Nepal, including the 1963 American Mt. Everest Expedition, winning a scoop on its success through some clever skulduggery. Although she socialized regularly with royalty and the most powerful politicians in Nepal, it was climbers who captured her imagination.

She became a fixture in Kathmandu as she motored around town in her baby blue Volkswagen Beetle, tracking down expedition leaders in order to learn of their plans and to document what they did or didn’t climb. She became skilled at sleuthing fact from fiction, and she rarely erred. Climbers trembled in fear of this alpine detective’s prodding questions. “I don’t mean to frighten people,” she said, but then she added that a little fear might help in ferreting out the facts. She wrangled the biggest egos in Himalayan climbing into submission, and many of them became her dearest friends. Sir Edmund Hillary once described her as “a bit of a terror.” But he freely admitted that her friendship was gold standard—one that lasted a lifetime. Reinhold Messner called her a “first-class journalist.” Kurt Diemberger described her as a “living archive.” Together with Richard Salisbury, Elizabeth transformed her vast archive of climbing data into the Himalayan Database, which remains a priceless resource for climbing historians.

As the numbers of expeditions increased in Nepal, it eventually became clear that Elizabeth could no longer handle all of the work without help. Respected historians and climbers came to help her chronicle the climbs and document the facts. One of those was Billi Bierling, from Germany. Over the years, their professional relationship grew into a deep friendship. In Billi’s words, upon learning of her passing: “I cannot put it into words how much this amazing woman has meant to me, how much she has taught me, and how much I will miss her in my life.”

My lingering memory of Elizabeth was of her standing at the top of her stairs with a slightly lopsided smile, waving good-bye, after our first intense ten days of getting to know each other. We had laughed and cried, debated dates of climbs and details of her love life, searched through dusty files, and drank a lot of tea.

Elizabeth Hawley: a pillar of society in Kathmandu, an icon in the mountaineering community, a fiercely independent woman, and a dear friend to many.

A brief remembrance by Richard Salisbury, co-creator of the Himalayan Database, can be found here.