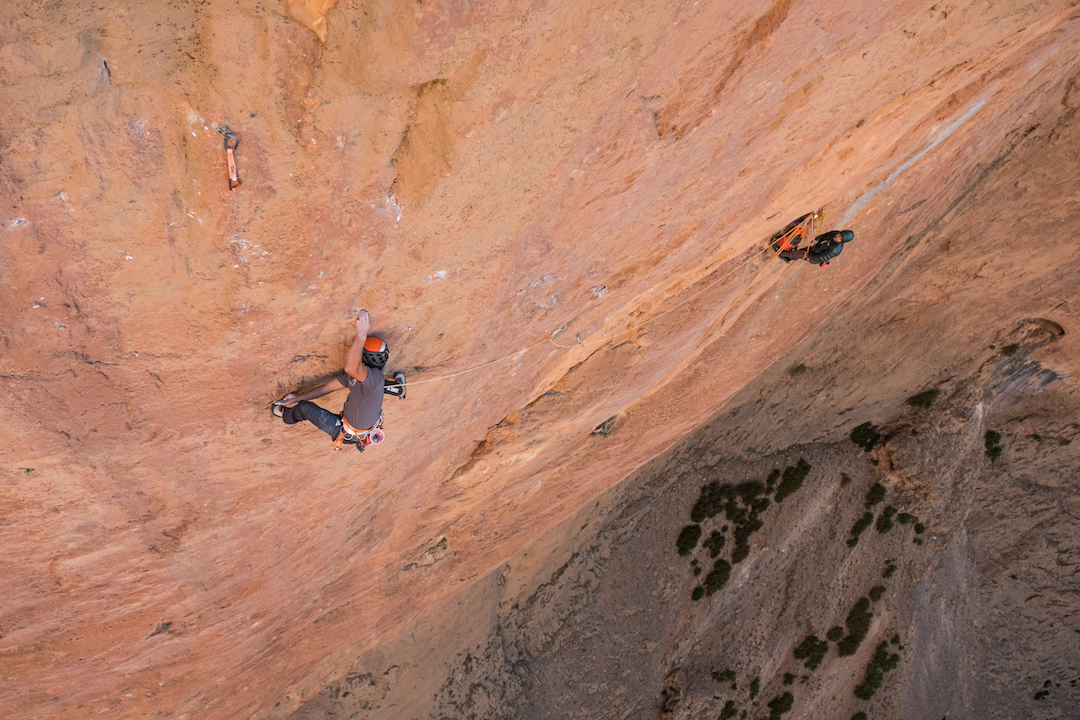 In search of new projects, Alexander Huber and I were drawn to the deep and impressive Taghia Gorge, especially to the Tadrarate, a 500m wall of beautiful red limestone. We first visited the Taghia in October 2016. As always, Alexander was psyched, because the cliff was steep and difficult, and this was a country he had never visited. The charm of the mountains, the intense red colors of the landscape, the green columns of the poplars, the hospitality of the Berbers, and the decelerated life without the slightest sound of a motor—these alone are worth a trip.

The southeast face of the Tadrarate holds an unfinished project of Arnaud Petit and friends. Farther to the left is a mostly bolted Polish route, Widmo, first climbed in 2004 and then redpointed with a hard direct finish in 2015 (Opozda-Samitowski, 8a). A quick check of the wall showed us that it would be very hard to open a direct new route ground-up in our chosen style. We prefer to follow the line of least resistance, using all the weaknesses a wall offers to us, with a minimum of bolts.

So we decided to start up Arnaud’s project and then strike out on our own. The first ascent of our route, La Grande Rouge, took four climbing days. Once we left Arnaud’s line, partway through his sixth pitch, protection became scarce and long free climbing passages became obligatory. Especially in the heart of the route, there was hardly a possibility to use trad gear— our only chance was to run it out, always in the hope of finding a placement for the skyhook in order to drill another bolt. The last six pitches (up to 7b) offer two bolts in total for protection; the rest has to be protected by yourself. These pitches show that the grade is not everything. Here you will see that style matters!

Exactly one year after the first ascent we were back in order to redpoint our project. Including travel days we had only two weeks, so there was no time to waste. We understood that we would have to climb all the crux pitches in the shade, before the relentless yellow star killed our plans with its heat. Therefore, we started at first light in order to have perfect sending conditions in the core of the route.

The sixth pitch is the first 8a, followed by an easier (7a) but almost featureless pitch that traverses straight left for roughly 25m, with only one cam as protection—as challenging to second as to lead. Our line then goes straight up again on an 8b pitch that is beautiful to climb and has a pretty challenging runout at the finish. The final difficult pitch (8a) is the ninth, with long runouts and, in the middle of the pitch, a dynamic move that is very exciting.

Although the upper six pitches are no more difficult then 7b, they are serious and we had to stay focused. Meanwhile, the sky was totally covered in dark clouds. It was almost ridiculous after all the merciless hot and dry days on the wall—exactly on the day of our redpoint, it started to rain! But we had no choice, we had to finish. At 3 p.m. we were on top of La Grand Rouge (15 pitches, 8b), as proud of our route as we were happy about the amazing time we’d spent in the High Atlas.