ON JULY 30, at 1:59 p.m., Yosemite dispatch was notified via a 911 call that a climber (Matt Price, male, 20s) had fallen near the start of the classic south ridge of Matthes Crest. The reporting party (Jeff, also in his 20s) said he was Matt’s climbing partner and had witnessed the fall, and that Matt had died.

Matt and Jeff had met in person only a few days prior to their climb, after striking up a friendship on an online climbers’ forum. They had decided to meet for a climbing trip to Yosemite, and on Saturday, July 29, the two climbed Tenaya Peak. Jeff stated that they felt comfortable and seemed to be “really in sync.”

On Sunday the 30th the two hiked to Matthes Crest from the Cathedral Lakes trailhead. They arrived at the base sometime before noon and prepared for the climb. They had brought two 60-meter, 8.5mm half ropes and discussed the pros and cons of using both simultaneously (as per design) or using just one to simplify rope management. They were both under the impression that a single-strand 8.5mm half rope could hold a leader fall safely, so they agreed to keep one rope in Matt’s backpack and bring it out once they reached the rappels at the summit of the North Tower.

The team agreed to swing leads, with Jeff leading the first pitch. At the first belay stance, they prepared to swap leads and discussed strategy for the next pitch. The most frequently traveled route would have led slightly climber’s left of the belay station but involved a spooky step-across move that made Matt uncomfortable. Another option to climber’s right of the belay station appeared to consist of easy face climbing but with few protection options. Jeff later said that Matt became increasingly nervous as they discussed the options; he offered to lower Matt to find a better route oreven call off the climb. Matt decided he would take the climber’s right option. Somewhere between noon and 1 p.m., he started climbing.

After several moves, Matt was able to sling a horn with a runner. He continued to climb up and right on the face. Jeff reported that his last words to Matt were, “Don’t climb up anything you can’t climb back down.”

Matt reached a point about five toten feet past his protection and out of Jeff’s line of sight. Jeff heard him yell an expletive and could tell that he was falling. He felt a tug on his belay device and believed that he had successfully caught the fall. Within what he described as a second, he felt the tension on the rope release and saw Matt falling to the base of the route. Jeff yelled down several times without any response.


After several moments he pulled the rope back and saw that it had been broken or been cut. Jeff took several moments to establish a rappel anchor and then rappelled on the remaining rope to the base of the climb, where he found that Matt had died from his injuries.

Jeff attempted to call 911 numerous times but was unable to get a call through. He decided to hike to the north end of Matthes, about 1.5 miles away, where he eventually was successful in making a 911 call. He was instructed to return to the accident site and wait for rescue personnel. At approximately 5 p.m., SAR team members had arrived on scene at the base of Matthes Crest and confirmed that Matt had been killed in the fall. ( Source: Yosemite National Park Climbing Rangers.)

Based on an examination of the rope and the site of the fall, it is likely the rope cutas it slid along one or more of the sharp flakes or crystals in the area. The victimwas climbing an arête to the right of his only protection on the pitch, and the rope would have dragged along the face under tension as he fell. After the fall, about 20 feet of rope remained attached to the victim, plus about three feet of exposed core.

It’s impossible to know if this accident would have occurred had the party been using both of the half ropes, or if they had been using a single-rated rope. Technical investigators who surveyed the scene stated that a larger rope might also have been cut in the same situation. Nonetheless, a climb such as this, especially early in one’s climbing career, is no place to test the boundaries of one’s equipment. When a rope system is tested and rated to be used a certain way, that is how it should be used.

The evidence suggests a rope cutting over an edge led to this fatality, but the climber’s fall is what caused the rope to cut. While the two climbers seemed to be within their physical capabilities, a route like Matthes Crest may have been inappropriate for the team, based on their alpine experience. Finding the best line onthis climb (as with many High Sierra climbs) requires route-finding skill; it’s also important to have the ability to downclimb or traverse out of unexpected difficulties. Pushing your personal comfort zone is best done in less committing environments. ( Sources: Yosemite National Park Climbing Rangers and the Editors.) 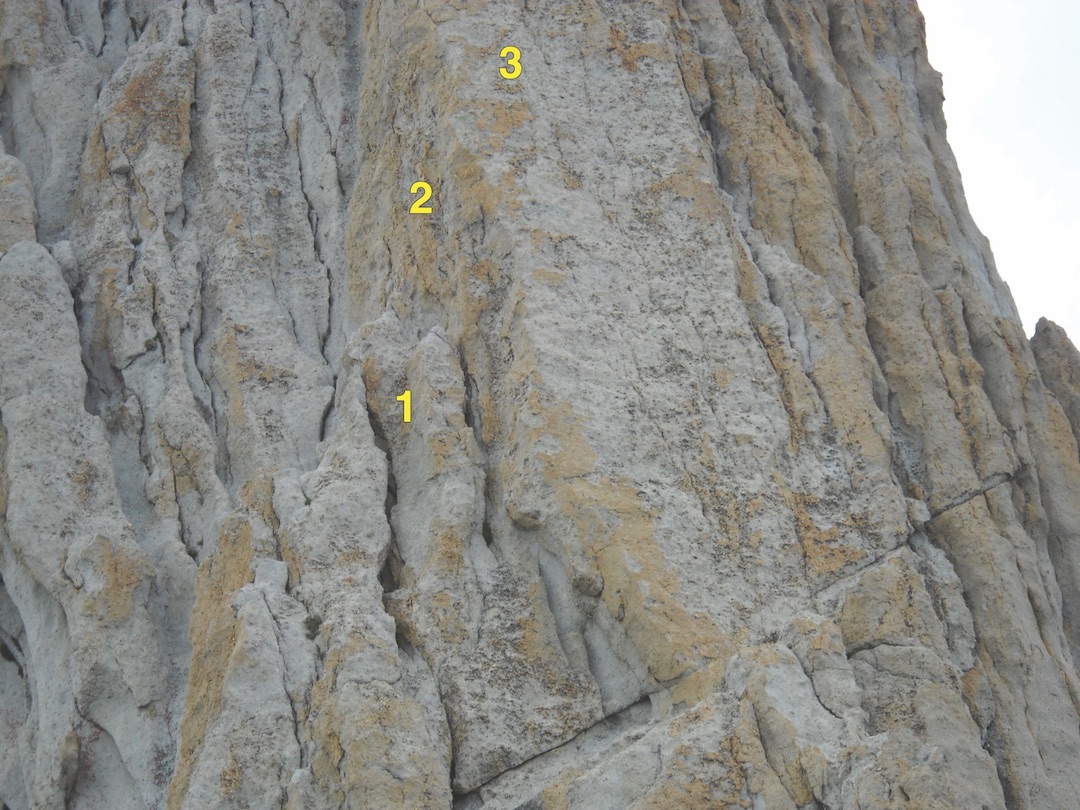 Area above the first belay on Matthes Crest. (1) Belay stance. (2) Leader’s only protection (a slung horn). (3) Leader’s approximate high point on the right side of a shallow arête, five to ten feet beyond the slung horn. The normal route moves left and up from the belay.
NPS Photo
Previous Next

Area above the first belay on Matthes Crest. (1) Belay stance. (2) Leader’s only protection (a slung horn). (3) Leader’s approximate high point on the right side of a shallow arête, five to ten feet beyond the slung horn. The normal route moves left and up from the belay.
NPS Photo
Previous Next